As parliamentary elections approach, doubtful electorates told NOW they hesitated to trust running opposition lists, but experts say that political participation is a citizenry duty imperative to be exercised. 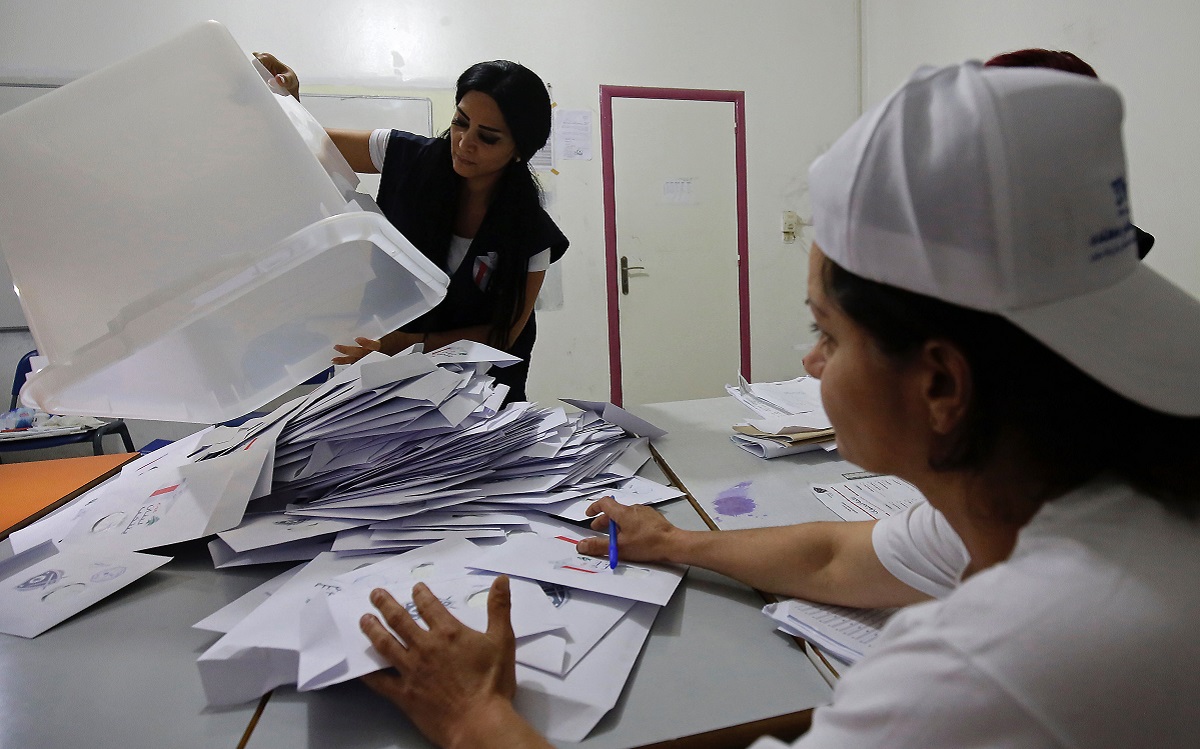 Lebanese officials open a ballot box at a polling centre in the coastal city of Batroun as they start to count the votes after the country voted in its first parliamentary elections in nine years on May 6, 2018. Photo: Ibrahim Chalhoub, AFP.

Lebanese software engineer Wissam Moussa, 30, should vote on May 15 in his hometown, Tripoli. But he says he might be boycotting this parliamentary poll because he is disappointed by the opposition groups.

NGO worker Lena Kawas, 24, says she is also disappointed by the choices in her district, South II, which covers the city of Tyre, its surroundings, and the Zahrani region. But she is planning to go to the polling station and submit a blank vote in protest.

“Although I still need to do my homework and look up all the opposition lists running in my district, it’s very discouraging to have three running against each other. I would have preferred not to have to choose one opposition against the other,” Moussa said.

Many Lebanese have said on social media that they would either boycott the May 15 elections or vote blank. The reason, they say, is the lack of a united credible opposition. This absence of unity leaves people like Moussa and Kawas, who were part of in the October 17 protest movement and hoped to bring about a change in the Lebanese political system, disappointed and distrustful.

However, experts warn that both options – casting a blank vote or boycotting the elections altogether –  would play in favor of the current political class and, moreover, could build the grounds for authoritarianism.

“People have the right to choose whichever electoral tool fits their personal convictions, I’m against the blame narrative that guilts trip people into voting. However, analytically speaking, a blank vote could be stealing from otherwise a protest vote,” Carmen Geha, associate professor of public administration at the American University of Beirut, told NOW.

Geha says that a protest vote rather than a white ballot can be used to indicate discontent;  voters would write a unified slogan on the ballots instead of choosing a list, or, she continues, voters could simply cast a vote for the most favorable opposition list if only to spite the establishment. This way, the protest would be obvious.

Senior professor of Political science and international affairs at Lebanese American University Imad Salamey agreed that boycotting and blank ballots could be crucial tools of democratic elections, but only if they stemmed from a nationwide campaign called by the opposition as a form of protest, not out of individual indifference and idleness.

“If individuals feel detached from the political process and feel that it doesn’t disconcert them, we’d be preparing the grounds for authoritarianism to flourish,” Salamey told NOW.

He explains that the importance of political participation is not limited to the number of parliamentarians elected, it is also an essential tool to fortify democracy by involving people in the decision-making process. Citizen passivity, he adds, can expedite forceful establishment ruling and manipulation, thus disregarding the people’s say in national affairs.

The higher the turnout, the fewer the chances of fraud and manipulation by the establishment. We need to prove to the world and ourselves that we still care and that we are willing to exercise our right and our duty.

“High rates of public involvement in the political process allow societies to grow more responsible and governments to become more accountable because it shows that there are people who still care and are willing to voice their opinions in the ballots,” Salamey said.

For Geha, voter turnout is not a matter to be ignored as the legitimacy of the process can only be protected if a large number of people show up on May 15.

“The higher the turnout, the fewer the chances of fraud and manipulation by the establishment. We need to prove to the world and ourselves that we still care and that we are willing to exercise our right and our duty,” Geha said.

The last round of elections in 2018, which was the first in nine years, saw a sizable decrease in voter turnout with 49.7 percent of registered voters casting a ballot compared to 54 percent in 2009. Analysts observed in 2018 a disproportionate turnout of votes across sects, marking the Shia and Druze as the highest participators, while Sunnis and Alawites took the last rank in participation. But one significant factor that deterred electorates from voting in 2018 was the discontent towards traditional parties, thus leading the majority of the population to boycott the elections.

Geha points out that this year, the discontent is directed not only towards the main sectarian parties, the new opposition groups that emerged after the October 17 revolution also partook in the disappointment of a once hopeful nation.

“The October 17 revolution brought us all together and what we wanted was a unified national campaign. Instead, we’re one month before the elections, drained and exhausted from daily struggles, and on top of that, we have to deal with the opposition’s immaturity and banal conflicts,” Geha said.

Moussa, who said he spent a year and a half protesting against the establishment, feels like all the protestors’ efforts have gone to waste. He even recalls when they would hold discussions during the revolution that highlighted the importance of elections as the main pillar of toppling the establishment.

“It’s confusing to have so many opposition candidates that I don’t know and don’t trust. I also feel dispirited mainly because we [the protestors] endured heavy beating and some of us lost our eyesight for the revolution so we wished for the opposition to transfer our fight from the streets to the ballots, which it failed to do,” Moussa said.

Most of the opposition groups that hailed from the uprising chose to campaign on social media, where the costs were minute in comparison to billboards and television advertisements.

But for Moussa, who votes in Tripoli, the opposition campaigns had little reach compared to the ones in Beirut, which dominated social media. He says that the candidates in his district need to exert more effort to gain visibility and widen their reach so as to facilitate the choosing process for their electorates.

He adds that he feared voting for an opposition-claiming list that turns out to be an establishment-affiliated list, thus spoiling his vote. But regardless of his confusion, Moussa said that he won’t be casting a blank ballot.

“To journey from Beirut to Tripoli and waste a whole day just for a blank paper seems useless to me. I’d rather use my day more productively,” he said.

Despite his distrust of the candidates, which was also partly the byproduct of Instagram accounts, such as Thawramap and Nadine Barakat, who used their platform to publish against opposition groups and candidates allegedly involved in corruption or having secret political affiliations, Moussa still felt the need to pay an ode to the revolution.

“I would have preferred to see candidates that were with us on the ground and that we recognize well but regardless, it is still our duty to vote. It’s hard to believe the revolution was just for nothing,” he said.

Geha adds that traditional parties might be regaining popularity amongst the older electorates that don’t regard the opposition candidates as suitable options due to their inability to unite and constant feuding online.

“People would rather the evil they know than the evil they don’t know, which is why we, as supporters of the opposition, need to counter these votes,” she said.

Disappointed and disillusioned pro-opposition citizens such as Geha and Moussa remain faithful to the revolution’s promise of change and view the upcoming elections as an extension to their fight against the establishment.

For Geha it is too late for the opposition to regain the trust of all the October 17 protesters. She says the grounds for change could be set for the 2026 elections when the new wave of diaspora that left after the 2019 financial collapse settled down in their new countries and were able to shake off the disdain brought forward by the compounded crises. Thus bringing more vigor and hopefully more organizational efforts in the next round.

“It’s important to note that the opposition groups we’re referring to are only three years old. Hopefully whoever remains after the elections will be able to mature and prepare for a more organized battle in the next round,” she said.

Geha is optimistic about the opposition winning a few parliamentary seats but explains that in the extreme case that they don’t, the outcome itself should not deter people from participating.

“If we don’t win any seats then that’s fine. Our souls are already crushed from living in Lebanon, so why not show up at the polls and give change a chance?” Geha said.

As for Salamey, he believes the opposition groups need to moderate expectations and address the youth, particularly, with realistic speech.

“Tell them their participation will make some difference. Encourage them in a way that makes them feel like this is their country and their future at stake,” he said.