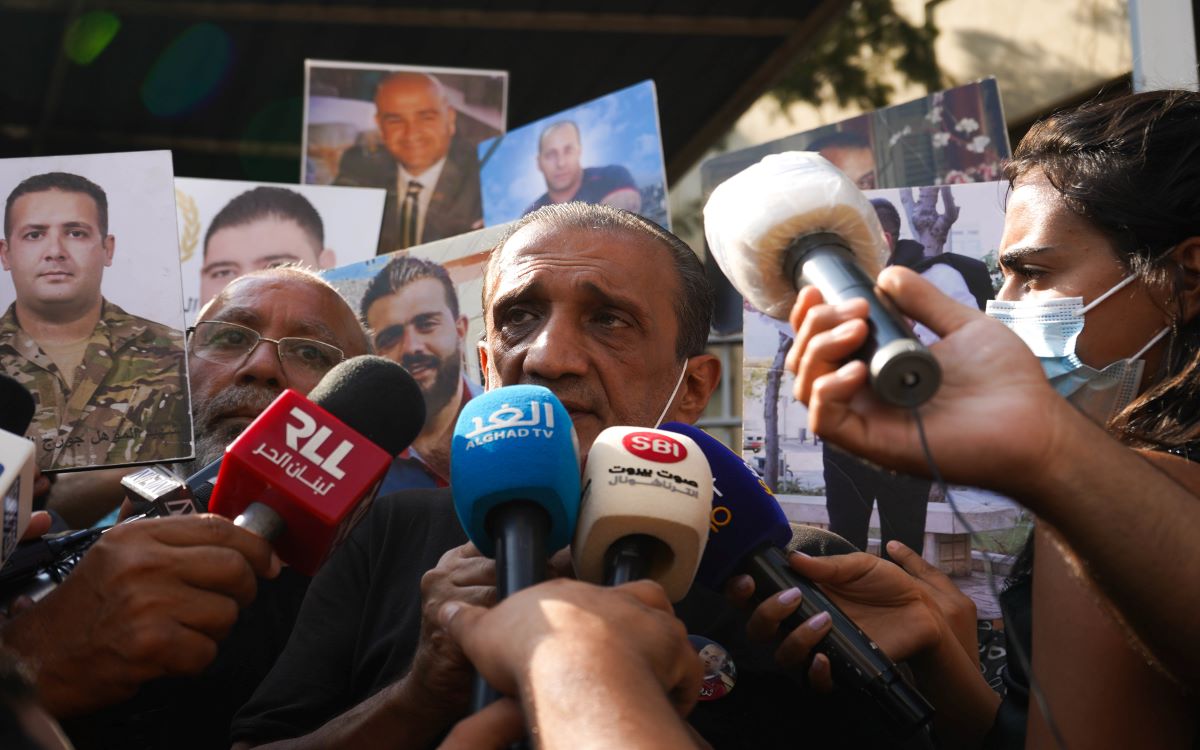 Ibrahim Hoteit during a rally of the families of the Beirut Blast victims. Photo: Dana Hourany, NOW.

The spokesman for relatives of those killed in the Lebanese capital’s port blast, Ibrahim Hoteit, quit on Saturday while denying he had been pressured to urge the lead investigator in the case to step down.

Hoteit told AFP he changed his mind about the judge over fears that tensions surrounding the probe could lead to civil war.

Several political parties, including powerful Shiite movement Hezbollah, have accused judge Tarek Bitar of political bias in his probe into the August 4, 2020 explosion that killed more than 210 people.

Tensions came to a boil Thursday when violence erupted following a rally by Shiite protesters demanding Bitar’s dismissal. Seven people died, dozens were wounded and an ominous echo of the 1975-1990 civil war intimidated the public especially the area inhabitants who were enmeshed in the raucous gunfight and whose homes were smeared by gunshot ruptures giving rise to modern war scars.

In a complete U-turn from his previous support for the investigator, Hoteit in a video circulated Friday night called for the judge to step down.

In the video, Hoteit blamed Bitar for the bloodshed on Thursday and condemned all endeavors of pushing for an international probe into the Beirut blast as he read out a drafted statement where he pensively lifted his gaze from his script toward his left then carried on reciting.

Following Hoteit’s video, a group of victims’ families issued a statement Saturday where they characterized the video as uncanny and argued that altered circumstances are possibly the motive behind this.

The families declared in their statement on Saturday that Hoteit’s censure of Bitar and requests made in the video in the name of the Beirut blast victims’ families do not represent them “in any way possible”. They re-emphasized their stance in support of Bitar as the chief investigator in the Beirut port explosion.

They said they believe their case is superior and worthier than it being politicized or put in the middle of the Lebanese sectarian and dominion conflict. The families reiterated their trust in Judge Bitar and reaffirmed Hoteit’s position has always matched theirs.

Hoteit’s speech in the latest video released of him contradicts every communiqué of his issued after last year’s harrowing ordeal when his brother, one of the 10 firefighters dispatched to put out a fire at the port, perished in the explosion that followed.

NOW previously spoke with Hoteit who expressed his full support of and confidence in Bitar who he believed is on the path of unearthing, with certitude, the truth about what led to the biggest explosion in Lebanon’s history that killed at least 218, injured thousands, and caused $15 billion in property damage.

The recent video released of Hoteit, where he appeared under duress, came after deadly clashes unfolded between Iran-backed Hezbollah and Amal movement on one side and yet-to-be-determined snipers on the other, who allegedly ambushed the protesters calling for the dismissal of Bitar due to his purported “political bias” and U.S.-backed measures in the probe, the same grounds stated by Hoteit in the video.

Many believe the video was produced through intimidation.