Though many observers believed that the 2021 Tayyouneh clash would mark the beginning of expanding armed clashes between Hezbollah and its opponents, in hindsight the multi-hour skirmish should be viewed as political theater that hasn’t yet led to military escalation. 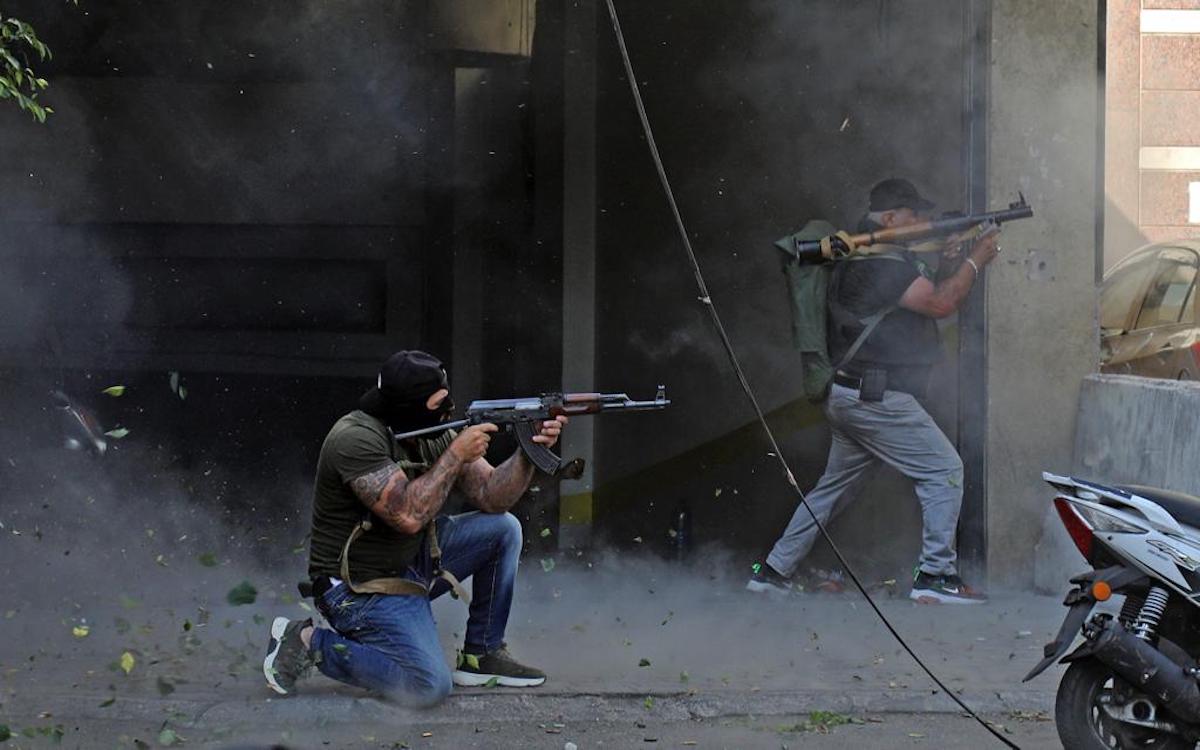 Shiite fighters from Hezbollah and Amal movements take aim with (L to R) a Kalashnikov assault rifle and a rocket-propelled grenade launcher amidst clashes in the area of Tayouneh, in the southern suburb of the capital Beirut, on October 14, 2021. Gunfire killed several people and wounded dozens at a Beirut rally organized by the Shiite Hezbollah and Amal movements to demand the dismissal of the Beirut blast lead investigator. The violence centered around Tayouneh, an area which lies at the crossroads of Shiite and Christian militia bastions that were battlegrounds in the civil conflict that ended three decades ago. Photo: Ibrahim Amro, AFP

On what seemed to be a regular October day in Beirut, an armed clash broke out that threatened to tear apart Lebanese society.

The people of a city that had known war for 15 years were again reminded that fighting could return at any moment.

The demonstrators were protesting Tarek Bitar’s investigation into the 2020 Beirut port blast, as they believed Bitar was biased against Hezbollah and would not give the group a fair examination.

Whether this was true or not has yet to be seen, considering that the investigation has been continually hampered by members of Lebanon’s political establishment, such as Amal’s Ali Hassan Khalil.

In a final show of force, thousands of Hezbollah and Amal militiamen marched through the streets of Beirut, in a raw display of sectarian intimidation.

Now, after a year, what happened that day is still rather unclear.

Though it remains uncertain whether the snipers were directly affiliated with the Lebanese Forces (LF), most people seem to believe that they were at least present in the area during the clashes.

Some people believe that Hezbollah manufactured the entire thing, and there really were no snipers.

Some even believe that the snipers were soldiers from the Lebanese army, but this theory has lost most of its traction.

Ultimately, what truly happened doesn’t really matter, as the Tayyouneh clash’s ramifications were, and still are, community-specific.

The military theorist Carl von Clausewitz famously remarked that “war is merely the continuation of policy by other means,” and this case is no different from what Clausewitz imagined.

Both Hezbollah and the LF, which are bitter rivals, made political gains from the Tayyouneh clash.

For Hezbollah and its supporters, the clash represented another attack on Lebanon’s downtrodden Shiite community.

For instance, Marwa Osman, a university lecturer and a journalist for the Iranian state-owned outlet PressTV, described the situation on Twitter as just another massacre committed by Samir Geagea.

She referenced a number of massacres committed during the Lebanese civil war (many of which did not actually involve Geagea, but Christian militias in general) harkening to the victim narrative that Hezbollah often deploys.

For the LF and its supporters, the clash represented another example of Hezbollah’s provocative attitude and ability to push the country toward civil war.

Supporters of Geagea and the LF often say, broadly speaking, that the LF is the last line of defense for Lebanon’s Christians. A common narrative in sectarian societies, Geagea’s supposed stand against Hezbollah and Amal at Tayyouneh invokes this narrative of “protecting Christians.”

Whether this is true or not is irrelevant to the political capital it generates.

Geagea’s gains in the May 2022 parliamentary elections likely were at least partially driven by the support he received following Tayyouneh, though other factors were certainly at play given the Free Patriotic Movement’s growing unpopularity among its Christian constituency.

These dynamics are not specific to Lebanon either.

From Northern Ireland to Bosnia, the politics of victimhood, usually along sectarian or ethnic lines, is a driving element of societies broken by inter-communal conflict.

Immediately following the Tayyouneh clash, many commentators speculated that violent sectarian clashes would continue, if not escalate, throughout Lebanon in the run-up to the May elections.

And, to be fair to them, this view was not unfounded.

Earlier in 2021, clashes broke out between Hezbollah and other Lebanese communities, such as in Khalde when gunmen fired on a Hezbollah-affiliated funeral procession.

However, since Tayyouneh, the security situation in Lebanon has been markedly calm, especially considering the myriad of crises from which Lebanon is suffering.

From an empirical perspective of post-1945 civil conflict, one might expect Lebanon to suffer from regular inter-communal clashes, but most instances of fighting in the last year have been highly localized and not necessarily related to the wider political situation.

As James Fearon described in his seminal work, Ethnicity, Insurgency, and Civil War, post-1945 civil conflicts tend to be associated with conditions that favor insurgency rather than ethnic or religious divisions.

Contemporary Lebanon comprises many of these favorable conditions, but a serious insurgency or civil conflict has yet to emerge.

This is not to say that, in the long run, a civil war, most likely between Hezbollah and the LF, won’t happen, but after three years of the Lebanese state receding to its most basic functions, the current level of chaos in Lebanon is less than expected.

As of now, Lebanon’s security forces have largely withdrawn, as the resources available to them have continued to dry up. Poverty has only increased, with around 80 percent of the population under the poverty line. Due to the economic situation, the unemployment rate is sky-high. The country is also awash with small arms and light weapons.

A relatively poor population with little economic opportunity, widespread arms, and a state that is incapable of maintaining security are all factors that tend to increase the likelihood of insurgency and civil war.

However, what this view leaves out is Lebanon’s established localized models of security and opportunity via political patronage.

Where the state recedes, political parties and powerful entities step in to fill the gap, though usually not to a fully satisfactory degree.

If Lebanon’s state had not always been known for its weakness, the current crisis may have sparked severe internal conflict.

Given the fact that non-state entities are well established in Lebanon, usually via political parties, the risk of internal conflict decreases.

Another important factor that is somewhat specific to contemporary Lebanon, is the fact that the balance of power is so one-sided.

When the civil war erupted in 1975, both sides — the Kataeb Regulatory Force and its Christian allies and the Lebanese National Movement (LNM) and its Palestinian allies — were relatively equal in terms of men and material, with a slight advantage for the LNM.

Now, however, Hezbollah’s dominance over its adversaries is obvious and well-known.

Hezbollah’s leader, Hassan Nasrallah, boasted about having the capacity to call up 100,000 men to fight and that it would be pointless to militarily confront the group.

Though the figure of 100,000 men may be a bit dubious, the point stands that there is no other force in Lebanon that could reliably confront Hezbollah and its large arsenal of advanced weapons.

The only thing that could tip the balance would be direct foreign military support for Hezbollah’s enemies, but this seems highly unlikely.

Though Hezbollah is capable of operating independently for the most part, it has been directly supported by Iran since its inception in 1982, and this has only been strengthened in the last decade, as Iran has deployed its forces to Iraq and Syria and established a contiguous land corridor from Tehran to Beirut.

Though the likelihood of internal conflict does increase as Lebanon continues to descend into the pits of economic and political devastation, one should not hold their breath that another war will break out anytime soon.

Clashes may eventually become more common, but this has yet to be seen.

As is always the case in Lebanon, no one really knows what could happen.