Northeast Syria’s environment is severely hit by climate change, bad policies, and war. Can its autonomous administration do anything about it, especially under Turkey’s threats of invasion? 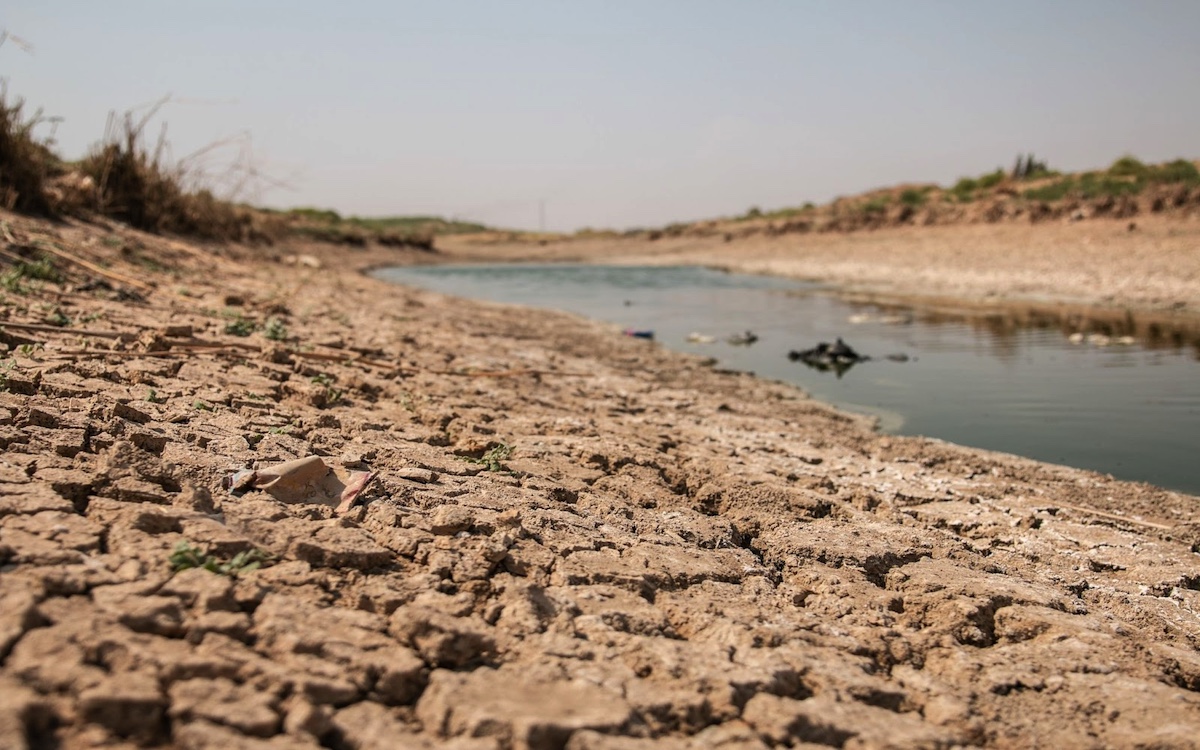 Dry wasteland fields, cracked soil, charred trees: along the M4 road that crosses all of northeastern Syria, the landscape is desolate as far as the eye can see. Some patches of greenery remain, thanks to the efforts of farmers who face the blazing sun wearing their colorful keffiyehs, but one thing is certain: after three years of drought, the desert is gaining ground.

Rojava (Kurmanji for “western” Kurdistan), governed by the Autonomous Administration of Northeast Syria (AANES), is known for its Kurdish social revolution. After proclaiming autonomy from Bashar al Assad’s regime and defeating the Islamic State (IS) in 2015, a new model of society emerged, based on local councils, values of ecology, and shared democracy between Arab, Kurdish and Christian peoples. But these gains are threatened by crisis and drought.

“We are affected by global warming, the drying up of underground wells, but also by the war,” sighed a resident of Qamishlo as he contemplates the ochre landscape that stretches as far as the eye can see.

Since Turkey’s interference in the Syrian conflict to fight the AANES, the environment has become a target.

The war between Turkey and its supporters in the Syrian National Army and the Syrian Democratic Forces (SDF), a Kurdish, Arab and Christian coalition supported by the United States and Turkey’s archenemy, the Kurdistan Workers’ Party (PKK) is a low intensity one, but it is making its mark on the local environment.

On the front lines of an invisible war

The town of Tell Tamer (“the hill of dates” in Arabic) bears witness to the intersection of climate change, drought, and war. This small town was home to a large Assyrian population, a Christian ethnic minority with ties back to the Mesopotamian antiquity. Of the 40,000 Assyrians who lived there before the civil war, less than a thousand still remain, especially after facing the IS’s brutal rule between 2013 and 2015.

When we arrived to talk to the farmers and the authorities, a drone threatened the blue sky. It has been sent by Turkey to destroy any military or civilian target of interest.

“They bomb civilians and children, as well as our fields, irrigation canals, and pumping stations. We live and work in apprehension,” said Mhessen Ali Khalil, a sun-beaten farmer with clear eyes. In August alone, 449 mortar, drone and artillery attacks were recorded in the region, leaving 27 civilians dead and 35 injured, according to the Rojava Media Center.

“Since Turkey has been cutting off the flow of rivers upstream, we have not had enough water to irrigate our fields and suffer from power cuts, sometimes for 10 days in a row,” said Mhessen.

He referred to the bombing of a pumping station a few weeks earlier: every time villagers went to repair it, they were shot at by pro-Turkish forces. The local authorities had to ask Russia, meant to enforce a ceasefire that came into effect in 2019 between AANES and Turkey, to intervene.

“They deliberately target our identity, which is deeply rooted in nature and our trees. The Afrinese love their olive trees like children, many have cried when they tell us what happened,” said Orhan Kamal.

Mhessen’s fields have become uncultivable, and he survives only thanks to his tractor, with which he plows the soil of other, more fortunate farmers. A visit to the Khabur River, which flows from Turkey and feeds the city, confirms his words: there is nothing left there but puddles of stagnant water and pumps running in a vacuum along the dried-up banks.

“It was our source of life. The water was drinkable until the 1980s and we used to come here to bathe, fish and celebrate our religious festivals,” said another Assyrian farmer who asked to remain anonymous.

The Assyrian population of the valley, renowned for its agriculture and green oases, was intimately linked to the health of its river. “Now that the river has dried up and our plants are dying, all we have left is exile,” laments the farmer, whose 1,000 hectares of land is occupied by pro-Turkish militias.

Similar observations were made in cities seized by pro-Turkish forces. The thousand-year-old olive trees in Afrin were burned to the ground and their oil sold by Turkey on European markets. In Sere Kanye, many fields of wheat have burned under the attack of incendiary balloons and Turkish artillery.

“They deliberately target our identity, which is deeply rooted in nature and our trees. The Afrinese love their olive trees like children, many have cried when they tell us what happened,” said Orhan Kamal, coordinator at Hevdesti (“Synergy” in Kurmanji) Association for Victims in North and East Syria.

The names of the Turkish military operations are not chosen at random: they refer to the olive trees of Afrin and the springs of Sere Kanye ( “on the springs” in Kurmanji).

Water, the nerve of war

The green valley of the Euphrates has also become a battlefield in this invisible war. The mythical river meanders from the Turkish border through the region, before flowing into neighboring Iraq.

In the middle, there is Tabqa, a huge dam with a bright blue lake surrounded by greenery. Built in the 1970s by the Soviet Union, Tabqa was the scene of violent clashes between IS and the SDF in 2017. Now it is being targeted by Turkey — not with bombings, but by lowering the water level.

“Since the 1992 agreement, Turkey must in theory let at least 500 cubic meters of water per second flow to Syria and Iraq. But as soon as AANES came to power in the region, the flow was reduced,” explains Walat Darwish, the dam’s administrator. From 400 cubic meters per second, he reports that it has dropped to an average of 250 or less.

“This has dramatic consequences for the whole valley, its 5 million inhabitants and its ecosystems,” laments Darwish.

He showed us a photo of a child suffering from leishmaniasis, a skin disease caused by mosquitoes gathering in the stagnant water of the asphyxiated Euphrates. More than 70,000 people are believed to be affected, confirmed Dr. Giwan Mustafa, chairman of the AANES Health Council.

Electricity production has also dropped from 840 megawatt hours to just 105. “We are forced to ration the cities and can only provide 2 to 6 hours of electricity per day,” says Darwish. For him, the tactic is clear: “Turkey wants to weaken the region and make it unlivable, in order to empty it of its inhabitants.”

The Turkish state denies such claims, and blames the issue on the three-year drought which has afflicted the region, as well as climate change.

“The official line goes that Turkey has to retain water at the Ataturk dam to compensate for low rain last winter, because of climate change,” said Ussama Sheikh Ali, research assistant at Omran, a Syrian think-tank based in Istanbul.

“For now, there is no proof of neither version,” he affirmed.

It is true that climate change, especially global warming, is hitting the region particularly hard.

“The Middle East is bearing the brunt, with temperatures rising by 1.5°C higher than average,” confirmed Sarah Saffieddine, a French-Lebanese researcher based in Paris.

Although it emits few greenhouse gasses, the region is suffering many woes: wildfires, droughts, air and water pollution, desertification…

Cities likes Beirut, Cairo and Baghdad are highly polluted by CO² emitted by cars and diesel generators. Syria has been spared this trend, but the ongoing civil war has come with its own price.

“The presence of ISIS in Northeast Syria has changed agricultural practices and forced farmers to intensify the exploitation of their soils, leading to a high in ammonium nitrate being rejected to the atmosphere,” stated a research paper published by a mixed team led by Sarah Saffieddine.

Not only does intensive farming result in air pollution, but also in a greater depletion of the soils and water wells, thus leading to desertification.

As we drove hours through bare landscapes, many locals told NOW of times when rivers would flow and lush canopies cover the area. “The landscapes have changed radically since my youth,” remembered a local journalist unwilling to disclose his name.

“The Syrian regime started many years ago by assigning each region one single crop type: Northeast Syria could only harvest wheat, and farmers faced harsh punishments if done otherwise,” he explains.

Started in 1987, this policy has long contributed to Syria’s prosperity and food security, according to numerous experts and sources on the ground. Historically, agriculture has  been central to Syrian socio-economic and political life: the sector was the third largest source of GDP, accounting for 20-25% of Syria’s GDP until 2007.

But this policy has paved the way for today’s crisis. There was little regulation on underground water consumption, so many water tables are now dried up.

The severe drought that preceded the 2011 uprising resulted in the loss of 80-85% of agricultural livestock between 2005 and 2011. The civil war led to further damage and destruction of key agricultural facilities such as irrigation systems, grain silos, and water pumping stations.

According to the FAO, losses in livestock production, crops, and agricultural assets reached $16 billion by the end of 2016, and both agriculture GDP and the number of agricultural workers were halved in 2018 compared to 2010.

This is not without link to the “infitah” (“opening”), neoliberal reforms that started in the 2000’s by Assad under the IMF’s guidance. Not only did it reduce the size of crops and productive economy, but it intensified the country’s dependence on oil.

Since the start of the civil war, numerous warlords and families affiliated to the Assad clan further jeopardized the environment for profit and war goals, notably by collecting money from local farmers and encouraging profitable but unsustainable policies.

IS added to the burden. “It has hunted down all the sand gazelles in the Abdulaziz mountains, a protected species in a natural park!” exclaimed the local journalist in disbelief.

Upon defeating ISIS, the Kurdish-led autonomous administration has centered much of its communication and policy on the environment. Not only does it affirm the principles of revolutionary ecology, inspired by Murray Bookchin and Abdallah Öcalan after him, but has pursued reforestation, planting thousands of trees in the Jezira region.

Groups such as the “Green Braids” align feminism with ecology: women in olive uniforms, linked to the YPJ (women’s protection units) can be seen planting trees and cultivating gardens on the administration’s communication.

It has set up an environment board to address the drought and has liberalized the agricultural sector, allowing its inhabitants to grow fruits and vegetables other than wheat.

Yet, it remains on the defensive. On 18 June, the Civil Council of Raqqa issued an order limiting maize farmers to sowing 25 percent of their arable land amid limited water supplies.

It is unclear if this policy has yielded any results so far, and if they will be able to mitigate the effects of both climate change and Turkey’s weaponizing of water and resources.

The autonomous administration is equally dependent on crude oil exports, which represent up to 60% of its economy and has encouraged an industrialization of the region.

“Many factories have sprung up, even some regime businesspeople have relocated to NES to benefit from its more open policies,” stated the anonymous local journalist.

Oil production, especially its crude refinement techniques, may have led to an increase of pollution and linked health issues in the region, according to reports. The same goes with local industries.

How “green” the autonomous administration really is and what it can do against both climate change and Turkey’s war are yet to be seen.

A sea full of bodies