Nothing can be done without political reform in Lebanon; fighting corruption is mandatory and it needs a reformed justice system with proper anti-graft institutions, but credible policies that can only come from a renewed political system. 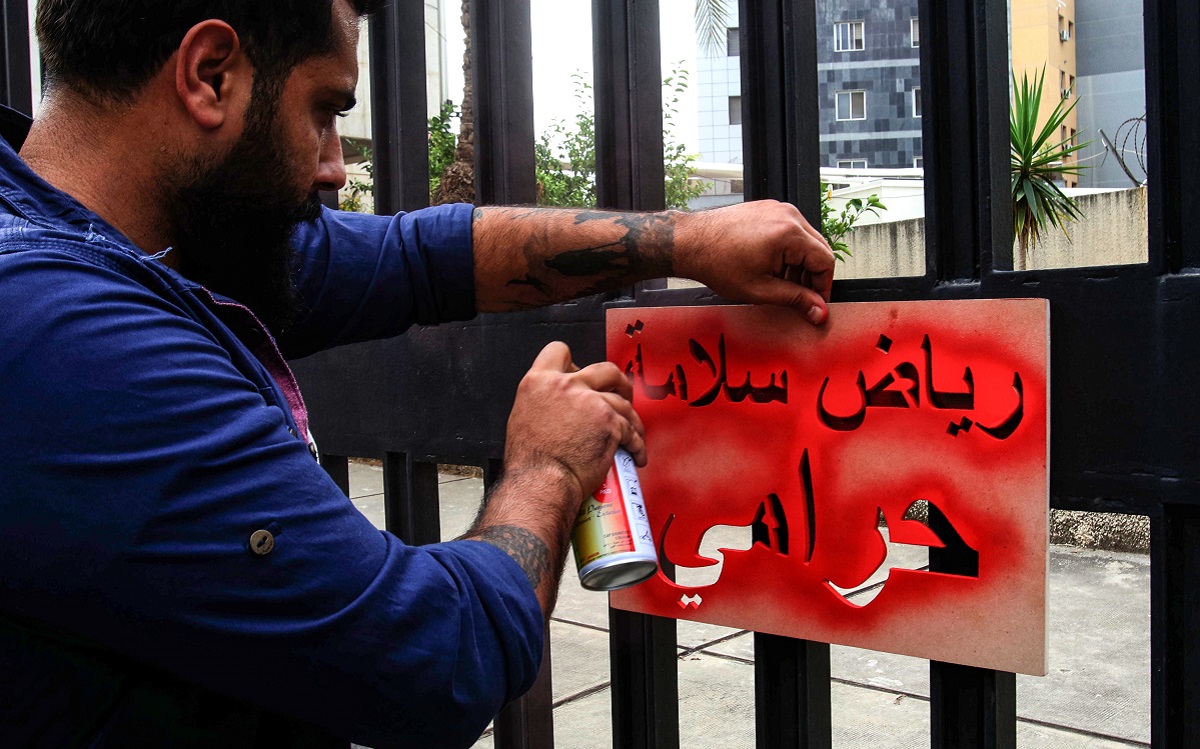 A Lebanese protester spray paints a slogan on the fence of the Banque du Liban (Lebanese Central Bank) at its branch in the southern city of Sidon on October 24, 2019, reading in Arabic "Riad Salameh (bank governor) is a thief), during a demonstration on the eighth day of protest against tax increases and official corruption. Photo: Mahmoud Zayyat, AFP.

Scores of demonstrators clashed with riot police on Wednesday at a bank in central Beirut, as they thought the head of the Association of Lebanese Banks was inside.

Lebanese depositors, many who have their life savings blocked in Lebanese banks since the 2019 financial crash, have been protesting often. Parents of Lebanese students abroad, who are unable to send allowances to their children also protest often.

Their demonstrations rarely make it to the international news. Maybe because the story hasn’t changed for the past two years.

But protests like this will keep happening. Especially when depositors are denied access to their own money while several Lebanese high-ranking officials show up in the Pandora leaks.

Not that anyone in the country was surprised to hear of Lebanese political figures implicated in international scandals involving off-shore companies and slush funds.

But other than press releases denying any wrongdoing, nothing really happened. None of the implicated officials ran to the closet to hide in shame. Because, of course, they don’t expect any real investigation to take place.

Concrete corruption cases are still taboo in Lebanon, and the few investigations that actually took place have been kept under wraps or are politically tainted.

The magistrate is often politically affiliated, and probes die in drawers. Follow ups are rare, and when they do occur, they are met with closed doors.

But these investigations need to happen.

Lebanon will need judicial reform, and the government will have to create institutions that can properly prosecute corruption, especially high-profile corruption cases.  Without a real anti-corruption drive, there will be no progress in Lebanon. And without political reform there can be no real accountability, let alone economic recovery.

All international institutions, including the International Monetary Fund, will push for all these reforms in the long-run.

Lebanon may finally have a government and everyone may have sighed with relief to see the sinking ship getting a captain.

The UN stepped in to help by allocating $10 million to help ease the fuel crisis,  providing fuel to hospitals and essential institutions.

The World Food Program said it would support 800,000 Lebanese by the end of the year in addition to its assistance to the Syrian refugees in the country.  Over EUR 100 million of the EUR 150 million will come from the European Union.

USAID has awarded a $29 million contract to design a system that delivers reliable energy across all regions of Lebanon.

But other states cannot replace the Lebanese state. And they shouldn’t. Lebanon was given a free pass until the government makes the first steps in one direction or another, with all of the country’s international donors hoping that they would be able to push towards a functional system that relies on accountability.

These donations are not signs that things are going to go back to where they were before 2019.

No country that had to negotiate its recovery from such a deep crisis has ever been able to return to some semblance of stability without building a justice system that prosecutes corruption in a credible fashion.

Over three decades after the end of the Lebanese civil war, development aid and loans handed out over the years to the government in Beirut have been swallowed by a black hole.  Billions of dollars in development aid vanished into thin air without any real audit, leaving the country beyond bankrupt. This requires accountability.

It’s a big deal: $14 billion that has virtually vanished into thin air.

No country that had to negotiate its recovery from such a deep crisis has ever been able to return to some semblance of stability without building a justice system that prosecutes corruption in a credible fashion.

For about 30 years, Lebanon’s politicians told various donor states – according to their political affiliation and line of thought to different donor states – that money was needed to build and rebuild.

Over the years, Lebanese politicians have become skilled at telling Lebanon’s story of sectarian strife, Israeli invasions, civil war, more strife, more divisions. The misfortunes were real. The war was real. The geopolitical chaos was real.

But, like in an organized crime network that forces children into begging, the aid network  became a lucrative business that never benefited the country, never really helped in building infrastructure or alleviating poverty.

But where did that $14 million vanish? That is for a new anti-corruption system to discover.

For years, development aid workers have complained in private, over a glass of wine at a conference cocktail party, that any accountability for grants given to organizations in Lebanon was virtually impossible.

The clientelism pyramids would not budge, evidence was buried, paperwork could not be traced.

But donors just let it go.

Changing Lebanon’s status quo was far more trouble than keeping it in place. It was less of a headache for various donors to allow the weak state to barely survive, mostly by donating bits and pieces to the army and, sometimes, the internal security forces and the few institutions that were seen as vital..

Donors prioritized political short-term stability over long-term earthquakes that would have shaken the system, creating stronger state institutions. Lebanon was left with laws dating from the times of the Ottoman empire, with a Parliament that met on occasion, with governments that recycled the same old figures affiliated to the sectarian factions.

Meanwhile, donations from regional powers went to political factions and politicians directly, feeding patron-client pyramids, keeping the masses dependent on scraps of aid coming from politicians who had already taken the lion’s share.

While all stakeholders were aware of what was taking place, nobody at the international level did anything about it.  It took an economic crash  and widespread street protests for the international community to stop funding a corrupt system.

Economic recovery and anti-corruption drives don’t only need international pressure, but also domestic changes. There is no easy and fast way out of it. No quick fix.

It takes years of work and institution-building processes to even begin to deal with corruption, particularly in states where it’s become endemic, like in Lebanon.

But politics is always the driver. Economic recovery, and a credible fight against corruption and accountability do not happen without political will, and that will only come from political reform.

Donors prioritized political short-term stability over long-term earthquakes that would have shaken the system, creating stronger state institutions. Lebanon was left with laws dating from the times of the Ottoman empire, with a Parliament that met on occasion, with governments that recycled the same old figures affiliated to the sectarian factions.

That means creating new political parties representing parts of society that want to exit the patron-client arrangement, or renewal of already existing political forces that are willing to give up the old ways and stop protecting corrupt leaders.

Lebanese society, of which three quarters is now living in poverty, requires new political leadership and new functioning institutions to deal with the corrupt ruling class. The crises will not vanish just by infusing humanitarian aid into the same flawed state construction. Attempting to deal with poverty by circumventing the flawed state construction completely, such as some donor states have been doing recently for fear the money would vanish once again, is also not the way.

The way is to maintain the pressure, both from the international and domestic levels, and create a political climate that allows for accountability.

But for this to happen, the international community needs to give up supporting stability over reform and support the drivers of change in society, rather than continuing to negotiate with the representatives of the same old system.