As the Lebanese government calls to return Syrians to their country of origin, analysts say the government seeks to distract the Lebanese public and blackmail the international community into giving Lebanon more aid. 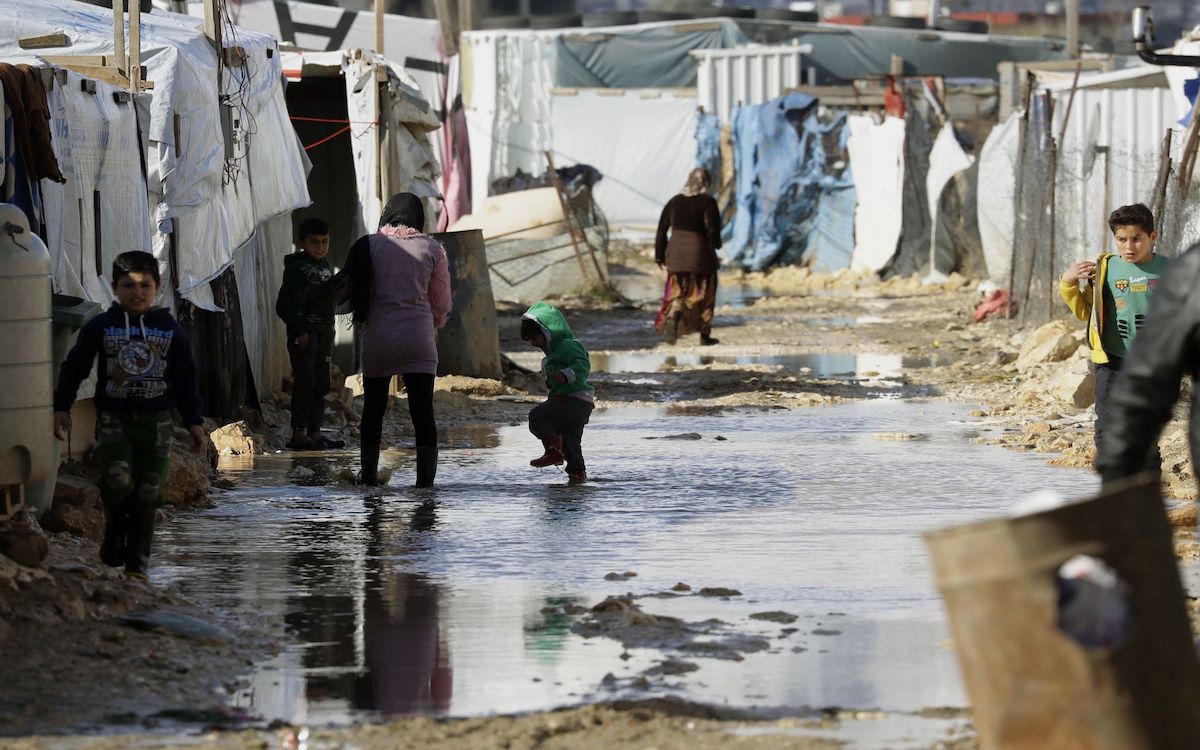 A view of flood waters at an informal tent settlement housing Syrian refugees following winter storms in the area of Delhamiyeh, in the central Bekaa Valley on January 17, 2019. Aid organisations say they are doing their best to distribute emergency aid to the most vulnerable among the estimated 340,000 Syrian refugees living in Lebanon's Bekaa valley. Photo: Joseph Eid, AFP

On July 6, Issam Charafeddine, Lebanon’s caretaker Minister of the Displaced, who was appointed by the pro-Assad Talal Arslan, said that Lebanon would begin returning around 15,000 Syrian refugees per month to their home country.

The shocking announcement was left open, as Charafeddine did not say when or how such a plan would be implemented.

Unfortunately, such calls by the Lebanese government are, to some degree, reflections of similar calls by European governments that seek to forcefully return Syrians to Syria.

There are around 1.5 million Syrian refugees in Lebanon, and considering that over 70% reported deportation as one of their biggest fears and less than 1% reported that they were considering returning to Syria, it does not seem like the government’s plan is either morally sound or logistically possible.

The refugee issue has been a simmering controversy since large numbers of refugees began to flow into Lebanon following the outbreak of revolution and war in neighboring Syria.

The daily hardships these refugees face seem unbearable, but still, they overwhelmingly report preferring to stay in Lebanon or possibly try their hand at going to a third country rather than return to Syria.

Though the war on the Lebanese-Syrian border ended almost five years ago, it is still not safe for refugees to return to Syria for a multitude of reasons, including the risk of forced disappearance, violence at the hands of government security forces, and the possibility of conscription into the Syrian army.

The Lebanese economy has been in freefall since 2019, but economic conditions in Lebanon are still overall better than they are in Syria, as the war destroyed the country’s infrastructure and economic sanctions prevent development.

Indeed, Syrian refugees in Lebanon have been between a rock and a hard place since 2011, with analysts saying that they are being used as pawns by the political establishment to distract both the Lebanese population and the international community from other issues.

The war on the border

The Lebanese border was one of the most crucial fronts in the Syrian civil war. Due to Lebanon’s proximity to Damascus, Homs, and the coastal Alawite heartlands of Tartus and Latakia, the Syrian government, as well as its Lebanese ally Hezbollah, viewed the border as an existential threat to the regime’s survival.

Iran, one of Damascus’s primary allies, also viewed the border region as a critical area in its geopolitical strategy in the Levant and Iraq.

Iran has continually sought to link Tehran to the Mediterranean by land, and clearing the Lebanese border was absolutely necessary to achieve this goal. Such a land bridge allows Iran to support its allies and proxy forces with more ease, possessing a crescent of allies that covers southern Iraq, government-held Syria, and Hezbollah-dominated Lebanon.

As early as 2011, refugees from Syria began crossing the border into Lebanon as violence in Syria became incrementally worse. As the government cracked down on cities across the country, refugees began to pour into neighboring countries.

Things became even worse in 2013, with Hezbollah’s official entrance into the war, starting with the battle of al-Qusayr, an area that had acted as a critical rebel supply line.

Following Hezbollah and the government’s capture of al-Qusayr in June of that year, they moved on to the Qalamoun mountain range, which sits along the border and had become infiltrated by rebel forces.

This was also the year when the government stepped up its policy of communal punishment, utilizing both land and air bombardment to punish and displace populations it considered to be supportive or sympathetic toward the rebels.

As the Syrian-Lebanese border is so critical to the Assad regime’s survival, depopulating the area became a long-term strategy to strengthen the link between Damascus and Latakia.

By 2016, well over a million Syrians had fled to Lebanon to escape the violence over the border, but in Lebanon, safety was also not guaranteed.

Everybody has abandoned [the Syrian refugees in Lebanon] and everyone is thinking opportunistically. The European Union doesn’t want to anger Hezbollah and Iran behind it, so it turns a blind eye towards the Lebanese government’s violations against refugees. The US is also involved in arrangements that don’t anger Iran and Hezbollah to facilitate its mediation in some subjects concerning Lebanon.

From the very beginning of the refugee crisis, the Lebanese state has tried to avoid dealing with the issue. Then Prime Minister Najib Mikati declared an official position of dissociation from the conflict in Syria, enabling Lebanon to maintain a tenuous middle ground.

As early as 2014, the Lebanese government began making it more difficult for refugees to either enter Lebanon or register as refugees officially.

Abbas Ibrahim, the head of the General Security Directorate, announced in 2015 that Syrians at the border would have to fill out paperwork similar to that of the visa process, declaring the purpose of their visit and the length of their stay.

More recently, General Security made a decision in 2019 to start deporting all Syrians who entered Lebanon irregularly after April 24 and hand them directly to the Syrian authorities.

Anti-refugee sentiments in Lebanon are strong among the population, especially among those who either support the Syrian government or view the refugees as a threat to Lebanon’s sensitive sectarian balance.

Most of the refugees who have left Syria are Sunni Muslims, and, as Samir*, a humanitarian relief activist and researcher, explained, largely live in Sunni areas of Lebanon, many of which already suffer from poverty. Samir expressed fear of being targeted by the Lebanese security services and did not want his real name to be used.

On top of negative sentiments toward refugees among the Lebanese population and economic deprivation — an estimated 90 percent of Syrian refugee households live in extreme poverty — refugees also face state-backed discrimination in employment, education, and housing, among others.

Still, most Syrians overwhelmingly prefer to live their difficult lives in Lebanon as opposed to returning to Syria.

Though calls to return Syrian refugees have been frequent since they arrived in Lebanon, Charafeddine’s statement is somewhat unprecedented, as the notion of returning 15,000 Syrians a month simply seems impossible.

As analysts pointed out, the government is well aware that it would take a large-scale military operation to remove that amount of Syrians from Lebanon and that these statements are both a distraction from other issues and blackmail to force the international community to give the Lebanese government more aid.

Muhammad Sabra, a Syrian lawyer and chief negotiator in Geneva representing the opposition, explained that what the government is doing wrong and seriously threatens the already strained well-being of Syrian refugees living in Lebanon.

Indeed, Syrians that have returned to Syria have faced grave human rights abuses, such as arbitrary detention, forced disappearance, torture, and forced conscription.

Human Rights Watch’s report paints a haunting depiction of what return could mean for any Syrian forced to return to Syria. Indeed, the group released another report in response to Charafeddine’s comments, saying that the move would be “a breach of Lebanon’s international obligations.”

Sabra went on to point out that large numbers of Syrian refugees in Lebanon have been denied refugee status by the government, and thus they cannot be protected by the UN.

“The main problem is that there exists a large number of Syrians in Lebanon who have been denied by the Lebanese government of the refugee status and this puts them in grave danger because they don’t have the UN High Commission for Refugees’ protection,” he explained.

On the political front, it was clear to both Samir and Sabra that the government seeks to use Syrian refugees as political pawns domestically and internationally.

“[The Lebanese government] is using this situation for internal political purposes, like diverting attention from Hezbollah’s arms and the topic of Hezbollah’s behavior regarding the demarcation of the maritime boundary with Israel,” Sabra said.

[Many] Syrians in Lebanon are under the protection of the United Nations, and no one can force them to return… but Syrians’ fear in Lebanon is clearly visible.

Samir took a similar position, saying that the Lebanese government seeks to help rehabilitate the Assad regime in the eyes of the international community.

He also made clear the Lebanese government would ultimately not use the army to displace refugees.

“I rule this option out. Syrians can be harassed because of papers or work, but the option of using the army in the process of returning Syrians is excluded,” he pointed out.

Samir and Sabra’s analysis has been evidenced by recent statements by Lebanon’s caretaker Prime Minister, Najib Mikati, saying in June that Lebanon would start expelling Syrians if the international community did not cooperate.

Sabra also pointed to the international community’s tacit acceptance of the status quo.

“Everybody has abandoned [the Syrian refugees in Lebanon] and everyone is thinking opportunistically. The European Union doesn’t want to anger Hezbollah and Iran behind it, so it turns a blind eye towards the Lebanese government’s violations against refugees. The US is also involved in arrangements that don’t anger Iran and Hezbollah to facilitate its mediation in some subjects concerning Lebanon,” he explained.

“Arab states are concerned with their internal situations and are also trying to restore relations with the regime. The refugees are the victims of all of them, and they are suffering daily for these reasons. And I think that the situation is going to be very dangerous in case the Lebanese government carries out its threats and even returns only a small number of refugees, those will be susceptible to all kinds of violations from Bashar’s regime and their lives would be in real danger,” Sabra continued.

Samir pointed out that there is some protection for refugees, but that it is not enough, and they still face very real threats.

“[Many] Syrians in Lebanon are under the protection of the United Nations, and no one can force them to return… but Syrians’ fear in Lebanon is clearly visible,” Samir said.

“With the presence of Hezbollah, the Aounist movement [the Free Patriotic Movement], the Ba’ath Party, and the Syrian Socialist Nationalist Party, all of which are affiliated with the Syrian regime, they constitute a means of pressure and fear for Syrians in Lebanon,” he added.

On the other end of the political establishment, politicians like Sami Gemayel, the leader of the Kataeb Party, which is opposed to Hezbollah, voiced his support for returning Syrians to Syria when he spoke to Russian ambassador Alexander Rudakov.

Another anti-Hezbollah party, the National Liberal Party, said in an official statement that Syrians who enter Syria for any reason should not be allowed to return to Lebanon and that “they continue to drain Lebanon’s infrastructure and resources.”

Hopefully, the international community intervenes in a way that prevents a single Syrian from being forced to return to a country that is no longer safe for them.