Freedom of the press versus oppression

Hassan Shaaban and Dima Sadek were attacked by Hezbollah for covering protests in the south and criticizing Iran respectively, showcasing a worrying trend in Lebanon of attacks on freedom of the press. 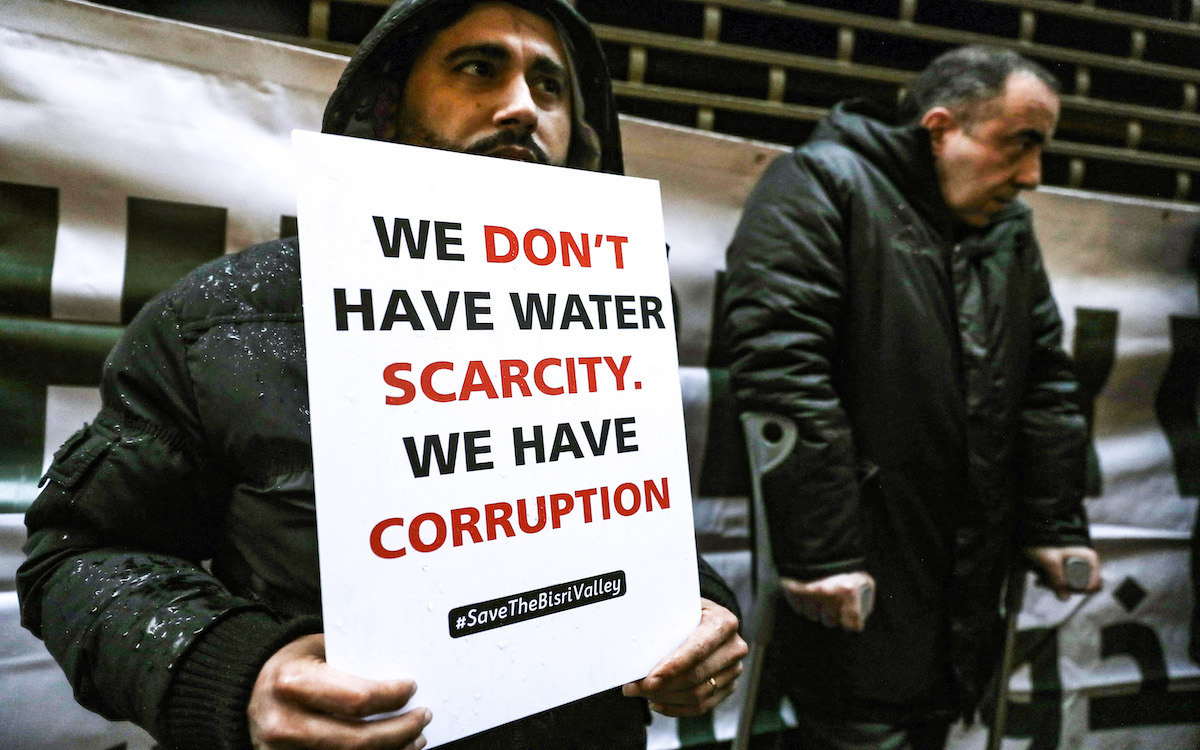 Activists hold signs as they demonstrate in the rain at a sit-in outside the World Bank's headquarters in the centre of the Lebanese capital Beirut on March 4, 2019, in protest against the institution's financing of a new dam project in the Bisri valley south of the capital. Photo: Joseph Eid, AFP

In a remote Lebanese village in the south of Lebanon, around twenty people took to the streets to call for one thing: water.

The protest took place in the village of Beit Yahoun, a Hezbollah stronghold near Lebanon’s border with occupied Palestine. The only journalist to report on the event was the village’s own, photojournalist Hassan Shaaban.

Shaaban posted the first video on August 1 —  just three days before the Beirut blast’s second anniversary — depicting a small group of locals expressing their frustrations over the scarcity of running water.

“We are the strongest two parties here,” one woman said referring to the Shiite Amal and Hezbollah parties that dominate south of Lebanon. “We have the money and the weapons yet we don’t have a drop of water.”

In the past, Beit Yahoun’s municipality has failed to provide its residents with a consistent supply of water. The only available alternative was to buy costly bulk supplies that barely last a month.

Despite the protest’s peaceful intentions and lack of direct criticism of Shiite politicians, it reaped negative outcomes.

Shaaban was attacked, beaten, and threatened by people affiliated with Hezbollah, he told NOW. This came right before the attack on the British-Indian writer Salman Rushdie carried by a pro-Iran 24-year-old American-Lebanese Hadi Matar, who was allegedly fulfilling the fatwa imposed by Iran’s late supreme leader, Ayatollah Ruhollah Khomeini in 1984.

Rushdie’s incident triggered mixed reactions. Many condemned the attack and others — mainly pro-Iran sympathizers and supporters of Hezbollah — defended it. The latter would go on to threaten and attack their contenders online which, for experts, signals a worrying precedent for further abuse and oppression of essential freedoms.

A photojournalist attacked for doing his job

Shaaban, a local freelance photojournalist, was attacked in his hometown of Beit Yahoun by a group of 10 or more men on August 3, two days after the first video he posted went viral.

“I knew they didn’t like it when they saw me filming the protests,” Shabaan told NOW.

“However I was just doing my job, I did not organize the protests nor did I express my own opinion on camera.”

“If you claim to support diverse opinions why send people to hit me? Even if it was an individualistic case that doesn’t represent the entire party, why have such people as members of your party?” Shaaban said in response.

Following the attack, Shaaban was left with minor injuries and bruises. However, he knew his posts on Facebook — which are sarcastic criticism of the political class, including Hezbollah — angered his attackers who are either directly affiliated with the party or fervent followers.

Hezbollah officials headed to Shaaban’s house to settle the tensions,  reportedly telling Shaaban that “they support differences in opinions and will make sure to punish the attackers, but it would be better if he took down the video because people are speaking badly about them.”

“If you claim to support diverse opinions why send people to hit me? Even if it was an individualistic case that doesn’t represent the entire party, why have such people as members of your party?” Shaaban said in response.

As for deleting the videos, the photojournalist refused and said that “what’s posted is posted and if you have a problem with it, simply don’t look at my page.”

The next day, on August 4 — the day of national grievance in remembrance of the devastation of the 2020 Beirut port explosion — Shaaban found a bullet hanging from his car window.

As he headed to Beirut for a work project, he says the party kept sending family members to convince him to take down his videos. He refused.

When Shaaban returned to his village last week, he found one of his car tires punctured, with a note that read, “leave this village you agent, you dog.”

“I’m not going to delete any posts, I’m going to continue doing my job and they didn’t scare me. I’m not challenging them but I won’t let this silence me,” Shaaban said.

This is not the first time Iran-backed Hezbollah aims to break up a protest in its strongholds. During the 2019 uprising, the southern city of Tyre saw swathes of people demanding the dismantling of the system, only to be intimidated by armed men who attacked the demonstrators with sticks and firearms.

The southern villages of Nabatieh and Bint Jbeil also experienced their share of attacks by Amal and “the Party of God” during the uprisings in 2019.

Lebanon’s imploding economy is deepening political uncertainty and security concerns in the country. Public safety is threatened by weakened security institutions that are underfunded and overwhelmed.

“This eradicates the diversity present in the south and imposes a doctrine of homogeneity. This is a systemic tactic to ensure the public sphere is contained and empty of dissent that might challenge the two Shiite parties,” he added.

“We all know nothing will happen if I sue my attackers. They targeted me because I’m not protected by any party and I have no backbone. They see me as an easy target to intimidate,” Shaaban said.

Ali Mourad, an assistant professor in public law who also hails from the south, told NOW that this sort of intimidation spills over into the victim’s daily life and instills terror into their psyche.

“People will abstain from speaking up and will just abide by the status quo. This fear becomes a part of their daily lives and beats them indirectly into submission,” Mourad said.

“This eradicates the diversity present in the south and imposes a doctrine of homogeneity. This is a systemic tactic to ensure the public sphere is contained and empty of dissent that might challenge the two Shiite parties,” he added.

The lawyer asserts that Shaaban’s incident could have been plotted by a group acting upon their own will — not that of Hezbollah’s officials. However, this sets a dangerous precedent for party supporters with an inflated sense of power who believe that their actions have no retributions.

“If the bar is so low that people can’t even demand water, how will they ask for more rights? People will now regulate their opinions and speeches in fear of Hezbollah’s retaliations,” he said.

Indeed, Shaaban says he was contacted by people in neighboring villages that were suffering from the same water issues, “perhaps the party is worried these videos will trigger more protests in the south.”

A bigger issue on the horizon

The head of the Press Photojournalists Syndicate, Ali Allouch, told NOW that photojournalists are often subject to violence by warring militias and security forces.

“We are always the first to take the hit. We carry bulky equipment so we’re more visible than field reporters. When someone doesn’t want us to broadcast a certain situation they physically assault us,” Allouch said.

He contends that when it comes to his line of work, all areas in Lebanon suffer from the same sectarian problems; to film or phototraph, permission is required  from the militias, and intimidation by their supporters.

“Although safety threats were present at all times, they’ve become much worse at the moment. Before we used to have faith in the security institutions, now we know no one has our backs,” Allouch added.

A study done by Beirut-based research center Information International shows a surge in murder rates in the first seven months of 2022. With rising cases of femicide and domestic violence as well, Allouch says that Lebanese society is becoming festered with violence and abuse on all levels.

Jawad Nasrallah, the son of Hezbollah’s secretary general, Hassan Nasrallah, and a famous Hezbollah-backed singer, Ali Barakat, posted statements inciting hate against Sadek. This triggered a massive wave of hate against the journalist, who began receiving  messages such as “I will rape you in public” and “her blood should be shed.”

“This attack is different than any other. It’s very intense and well-orchestrated,” Sadek told NOW.

“Campaigns against me were never this aggressive, there’s definitely more violence now.”

The journalist says she is taking precautions and is limiting her movements.

“This is not easy mentally and physically. You’re forced to adapt to this kind of aggression and see how you can fight it. Nevertheless, they might be on the winning side at the moment but the fight won’t end, we will persist.”