From seeds to strikes

The MENA region is paying a high price for the climate crisis. Activists and experts from all over gathered in Beirut to take stock and perhaps forge links for the future. 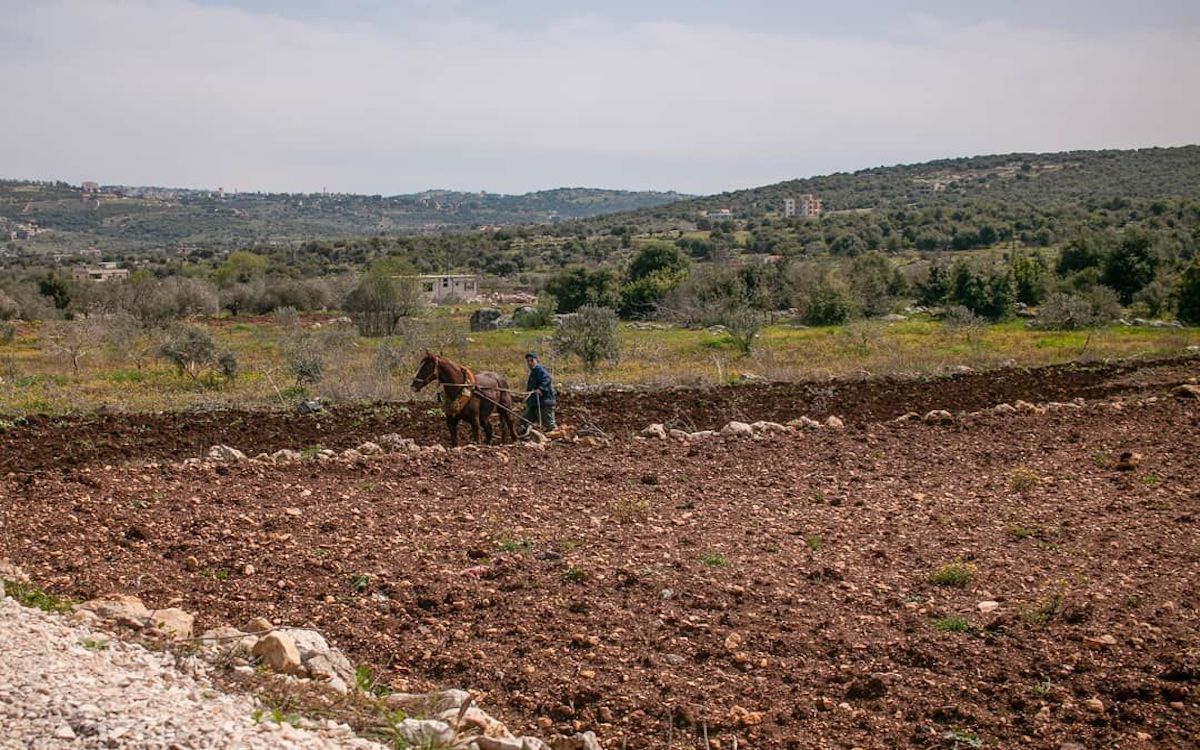 Climate change is hitting Lebanon and the whole Mediterranean hard. It is the region suffering the most from global warming, with temperatures rising 1,5°C above world average. “Lebanon is not a big polluter, but it will suffer disproportionately, and many animal and plant species might disappear soon”, warned Sarah Saffieddine, a Lebanese-French researcher based in Paris.

As the whole region is reeling from the devastations of climate change and pollution, finding a way out is not easy. From Morocco to Iraq, governments and companies scramble to transition from hyper-polluting fossil industries to renewables. Yet, their efforts often backfire against the population or fail to be implemented altogether.

“All over the region, we suffer from many similar issues,” said Aida Delpuech, a Tunisian freelance journalist covering environmental issues. High rates of urban pollution, waste dumps, energy mismanagement, and corruption hinder a just energy transition in the whole region, she said.

Yet, Lebanon can learn a lot from the experiences of MENA activists in how to organize, resist and build up alternatives.

The climate issue is a matter of survival for Ali Aznague, a Moroccan activist from the Siyada Network for Food Sovereignty in North Africa. His rural Berber village in the country’s south was totally abandoned due to drought and a lack of work opportunities. Most of its inhabitants have left to build a life elsewhere.

“Changing the agricultural and food model is crucial. Farmers suffer from precarious work and low salaries, and they are on the front lines of the climate crisis. So we must support them and break with the multinationals that spread chemical pesticides, destroy the planet and health,” Aznague said.

His words resonate in Lebanon, where the agricultural industry has come crashing down due to the economic crisis. The sector has been hit hard by the heightened costs of importing goods, the 90 percent devaluation of the Lira, and Saudi Arabia’s ban on Lebanese produce. Not only has the agricultural production threatened to plunge by 70 percent this season, but many farmers have been forced to abandon their crops.

“Food sovereignty is central in the fight against climate change,” said Corinne Jabbour from Jibal, a Lebanese non-profit which supports farmers in their transition to organic or more natural ways to harvest their crops. “It links all struggles together, from worker’s rights to public health to the environment,” she added.

In the arid fields of Hermel and the green valley of Bekaa, she has observed how many farmers started dropping pesticides and industrial seeds. “They became almost impossible to afford because of the importation costs,” she said. For her, turning to locally grown, organic produce is not a luxury for upper-class urbans, but “a necessity for bare survival.”

It’s a catastrophe: the state expropriated the local farmers and fishermen without compensation, and they have been fighting to get their rights and their land back since a decade.

The sectarian, neoliberal agricultural market is one reason for this.  “The whole sector is managed by politically affiliated cartels who fix the prices, and farmers have no control over their destinies,” explained Serge Harfoushe, member of Buzuruna Juruzuna, a farm collective in the Bekaa.

“Farmers have to sell their goods to these intermediate resellers and cannot control their margins,” he said, blaming the “mafia-like and monopolistic” functioning of the political parties in control.

The Lebanese agricultural market is highly unequal: 10 percent of landowners control two-thirds of all agricultural land. “And only four multinational firms deliver all the industrial seeds and most pesticides needed,” Harfoushe criticized.

To resist this pressure, Jibal encourages farmers to ditch the system. But the transition is not easy, foremost because of its long-term scope.

“We try to hold long-term projects with farmers, as a transition towards sustainable agriculture is a long process requiring years of follow-up,” Jabbour said. “If left without support, especially in the initial stages, at the first sign of trouble most farmers turn back to conventional practices.”

A transition – in which direction?

Achieving a just transition away from the traditional, fossil-fueled and capitalistic economy is not easy for any nation. “Tunisia has been at the forefront of the struggle,” asserted Aida Delpuech, a Tunisian freelance journalist who was also in Lebanon for the conference. She is documenting how supposedly “green” windfarms and green hydrogen projects harm locals and the environment.

Borj Essalhi is a small fishing village on the Mediterranean coast, where the Ben Ali government built Tunisia’s first wind farm in the early 2000s.  “It’s a catastrophe: the state expropriated the local farmers and fishermen without compensation, and they have been fighting to get their rights and their land back since a decade,” Delpuech said.

Just like in many other “green transition” projects in North Africa, the renewable energy produced in Borj Essalhi is exported to multinational companies or Western countries. “The locals don’t reap any reward, don’t get any of the produced electricity. On the contrary, their water gets pumped, their land taken away, and they have to move away to survive,” she explained.

Tunisia actually receives under 5 percent of its energy from renewable sources – its aim is to reach 30 percent in 2030, with steady growth. Although Lebanon has adopted the same goal, it seems to be going in reverse.

Though 75 percent of its electricity was covered by its abundant rivers and dams back in 1975, the crisis-ridden country has steadily reverted to fossil fuels since the Civil War. Today, oil and gas rule without dispute over Lebanon’s energy market – making up 96 percent of all energy used.

In Lebanon, pollution is increasing due to the heavy use of cheaply fueled generators, which have largely replaced government electricity. Recent studies show that Beirut is suffering from a 300 percent increased concentration of NO2 fine particles linked to pulmonary diseases and cancer.

The common denominator between Lebanon’s reverse transition and MENA’s unjust transitions is profit. The case of Electricité du Liban is telling, and many North African activists will quote it disapprovingly.

“It is the perfect example of a public service which was designed to fail since the beginning,” said Elyes ben Ammar, a member of the Tunisian UGTT syndicate. “It basically served the interests of politically affiliated lobbies which made profits from importing diesel and by selling their electricity under the market prices,” he explained. 40 percent of Lebanon’s debt is caused by the state subsidies to EDL: 63 billion dollars since the end of the civil war.

EDLs gamble has also proven to be catastrophic for the environment and the Lebanese society as a whole, just like many essential state services. “The Zouq Mosbeh power plant poisons everything around it, and its toxic smoke is known for higher cancer rates around the plant,” said Corinne Jabbour from Jibal.

I have been surprised to see how much Lebanon was NGO-ized. It seems that the workers’ movement and syndicalism have been effectively suppressed here.

Lebanon is littered with examples of such cases, from the Burj Hammoud waste dump to the polluted rivers of the Bekaa. “In all cases, underprivileged communities have to live with the waste and pollution created by companies,” said Jabbour.

Tunisia faces similar issues, said Aida Delpuech “For example, the coastal city of Sfax is suffering from a terrible waste crisis because of corruption and incompetence of political decision-makers, as in Lebanon,” she explained. “The city overflows with waste, and cancer rates are frightening.”

In Sfax just as in Lebanon, social movements have revolted against the waste crisis. “Activists from Sfax carried signs reading ‘We are not a waste dump’, and quite severe clashes erupted when the police tried to stop the protests,” Delpuech remembers.

From labor unions to NGOs

Tunisia has a long history of social activism. Its main workers’ union, the UGTT (General Union of Tunisian Workers), is still a force to be reckoned with, after it played a proactive role during the Arabic uprising of 2011. “Now, there is a new movement around climate justice, where the traditional workers’ unions and the newer ecological activists come together,” explained Elyes ben Ammar, member of the UGTT’s group on energy democratization.

“This started when working-class youths from the marginalized South of the country demonstrated against chemical industries and police repression,” he remembered. “Young people and women are the most affected by climate change and unjust transitions.”

Morocco has been witnessing the same phenomenon, said Ali Aznague from the Siyada Network. “Droughts and expropriation primarily target working-class women, who constitute the bulk of all land workers,” he explained.

For him, all struggles are interlinked, from feminism to working rights to climate justice. “In Morocco, the movement is organized from the basis, with strikes, sit-ins, demonstrations by field workers,” said Aznague.

Lebanon offers a radically different perspective. “I have been surprised to see how much Lebanon was NGO-ized,” said Elyes ben Ammar. “It seems that the workers’ movement and syndicalism have been effectively suppressed here,” he added.

The civil war and reconstruction period weakened the traditional workers’ unions and leftist parties in Lebanon. In the 1990s, the Hariri government created phantom syndicates to replace them. Large international NGOs such as USAID and the UN agencies have since then dominated the landscape.

But change seems to be on its way. The 2015 “You Stink” movement flared up after the entire country was left littered in waste during a suffocatingly hot summer. Many see a lineage from this initial revolt to the 2019 October uprisings and to the rise of reformist political parties such as Beirut Madinati.

At the same time, many young, educated activists started permaculture and circular economy projects in their villages. One notorious example is Buruzna Juzuruna, started in 2016 in the Bekaa. “At first, we focused more on producing heirloom seeds than on liberation, but it appeared to us that our approach was intimately political: we resist the multinationals and sectarian monopoly on food and land,” said Harfoushe.

Some large NGOs have proven unreliable and arrogant at times. They come with thousands of dollars, convert some farms, and then leave. The misguided thinking that short term interventions are enough, is harmful for farmers.

Buzuruna’s approach is quite different from many other most “green” projects in Lebanon, which claim to be apolitical and target a consumer audience. Yet, the scene might be slowly turning away from the NGO- or social enterprise approach.

Grassroots activist initiatives have sprung up, such as the Save the Bisri Valley campaign, which successfully pressured the World Bank to stop financing a dam in southern Mount Lebanon in 2020.

“Some large NGOs have proven unreliable and arrogant at times. They come with thousands of dollars, convert some farms, and then leave. The misguided thinking that short-term interventions are enough is harmful to farmers,” criticized Jabbour from Jibal.

“To change, we are starting to create links between our projects, and new forms of collectives are emerging,” she added. The Arab Reform Initiative conference may have succeeded in advancing this cause a little.

“We have begun discussions to create a horizontal network between our countries, perhaps with a research database and events,” says Aida Delpuech. The Siyada network will extend from North Africa to Lebanon, to engulf Lebanese permaculture and food sovereignty initiatives, Ali Aznague also confirmed.

It is unclear if Lebanon will ever witness the return of a working-class and politically grounded labor movement. Or if its scattered “green” initiatives will ever give rise to an intersectional climate justice movement. But, after two years of hibernation due to generalized depression and fatigue, hope seems to have sparked again.