A container of fuel that the army confiscated as part of an effort to stop suppliers from hoarding amid the shortages exploded. 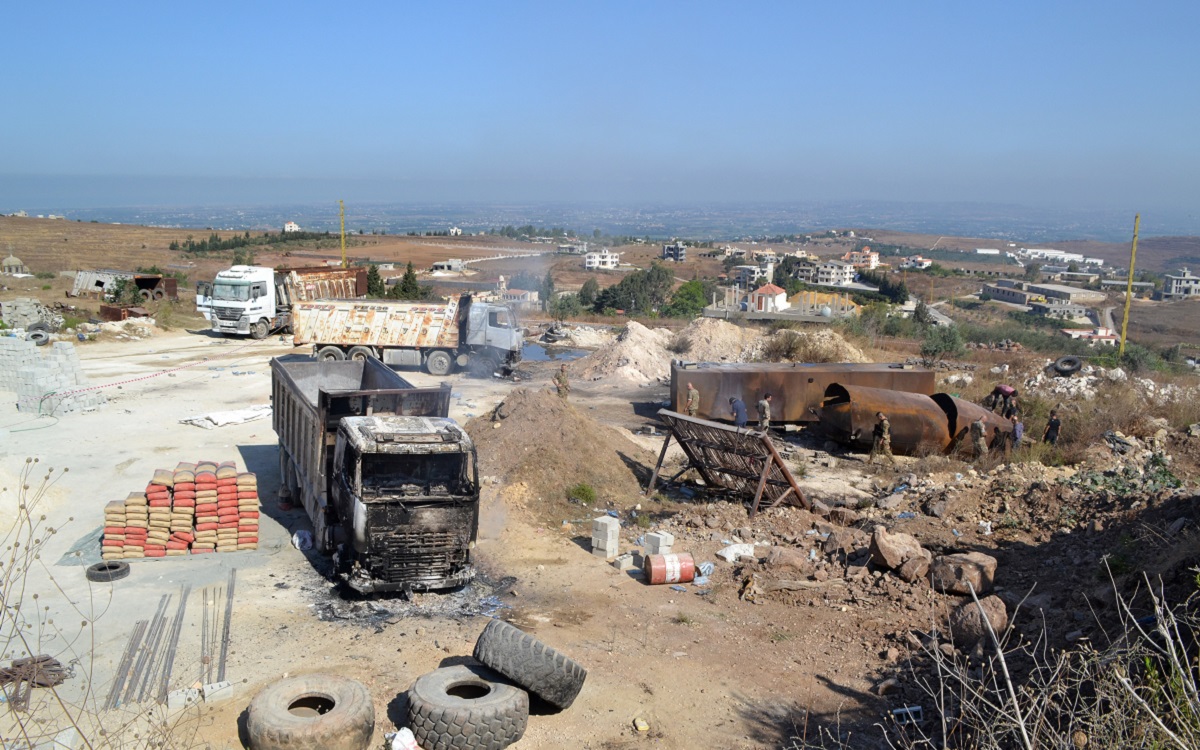 the site of a fuel tank explosion in the village of Tlel in Lebanon's northern region of Akkar. Photo: Fathi Al-Masri, AFP.

At least 28 people were killed and nearly 80 others injured when a fuel tank exploded in northern Lebanon Sunday, burning crowds clamouring for gasoline in the crisis-hit country.

The tragedy overwhelmed medical facilities and spurred a search for the missing, heaping new misery on a nation already beset by an economic crisis and severe fuel shortages that have crippled hospitals and caused long power cuts.

“Our teams have transported 20 dead bodies … from the fuel tanker explosion” to hospitals, the Lebanese Red Cross said on Twitter.

It added that 79 other people were injured during the blast, which took place in al-Talil in the northern region of Akkar.

The official National News Agency said that a container of fuel that the army had confiscated — part of an effort to stop suppliers from hoarding amid the shortages — had exploded.

It said the blast followed scuffles between “residents that gathered around the container to fill up gasoline” overnight.

Marwa al Sheikh, from Akkar, brought her 23-year-old brother, Ismail, at dawn to a Beirut burns centre; one of only two such facilities in the country.

He had been turned away from most hospitals in the north that were unable to treat burns to his arm and legs sustained during the explosion.

“At night, we were informed that the army was distributing gasoline… so people flocked to fill it in plastic containers… straight from the tank,” Marwa told AFP.

“Most of the people who were there said that someone had thrown a lighter on the floor” causing a fire that quickly led to the explosion, she added.

George Kettaneh of the Lebanese Red Cross told local media that first responders received reports of an explosion shortly before 2:00am (2300 GMT).

He warned that the tragedy will pile pressure on the burns centre at Geitawi hospital in Beirut, and the country’s other specialist facility, in the northern city of Tripoli.

Yassine Metlej, an employee at an Akkar hospital, said it had received at least seven corpses and dozens of burns victims.

“The corpses are so charred that we can’t identify them,” he told AFP.

“Some have lost their faces, others their arms.”

He said that the hospital had to turn away most of the wounded because it is not equipped to treat severe burns.

The burns centre at Tripoli’s Al-Salam hospital struggled with the influx of patients, and had to turn many away.

The Geitawi burns centre also struggled to keep up.

“The burns are very severe… almost their entire bodies are burned,” said one doctor there.

Caretaker Health Minister Hamad Hassan instructed hospitals across the country “to receive the wounded… at the ministry’s expense and without reluctance.”

Lebanon, hit by a financial crisis branded by the World Bank as one of the planet’s worst since the 1850s, has been grappling with soaring poverty, a plummeting currency and dire fuel shortages.

The Lebanese army on Saturday said it seized thousands of litres of gasoline and diesel that distributors were stockpiling at stations across the country.

Fuel shortages have left many with just two hours of electricity a day, while several hospitals have recently warned they may have to close due to power outages.

The American University of Beirut Medical Centre, the country’s top private hospital, said it would close by Monday morning if it doesn’t secure diesel to power generators.

It warned that this would cause hundreds of deaths.

Hundreds of Akkar residents flocked to the blast site which was cordoned off by the army early Sunday morning, according to NNA.

Soldiers and rescuers were sweeping the area for missing people and survivors, NNA said.

Lebanon’s President Michel Aoun called for an investigation into the circumstances that led to the blast.

The Akkar explosion comes less than two weeks after Lebanon marked the first anniversary of a blast at Beirut port last summer that killed more than 200 people.

On August 4, 2020, a haphazardly stored stock of ammonium nitrate fertiliser exploded and left swathes of the capital resembling a war zone.

It was one of history’s largest non-nuclear explosions.

In the year since, no officials have been held to account for that blast.

Despite the economic crisis, political wrangling has delayed the formation of a new government after the last cabinet resigned in the wake of the port blast.

International donors have pledged hundreds of millions of dollars in humanitarian aid, but the funds remain contingent on a new government being formed to spearhead reforms, and on talks restarting with the International Monetary Fund.