As a result of war and strife in Syria, unsanitary living conditions in neglected camps has led to an outbreak of Cholera that is likely to spread, experts warn. 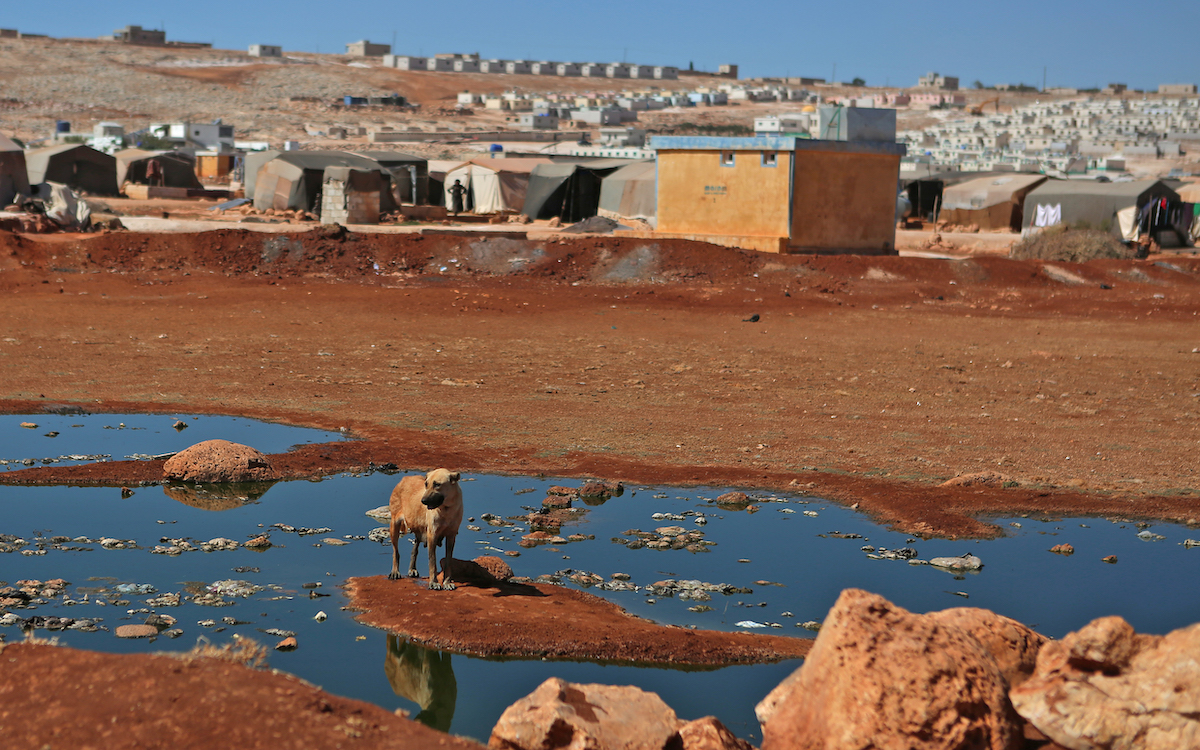 A general view shows a puddle of contaminated water at a camp for internally displaced people in the town of Sarmada, in Syria's northwestern Idlib province on September 25, 2022. Cholera is generally contracted from contaminated food or water and spreads in residential areas that lack proper sewerage networks or mains drinking water. The disease is making its first major comeback since 2009 in Syria, where nearly two-thirds of water treatment plants, half of pumping stations and one-third of water towers have been damaged by more than a decade of war, according to the United Nations. Photo: Aaref Watad, AFP

Syrians have barely emerged from the specter of the COVID-19 virus before facing another threat to their well-being – cholera. The World Health Organization announced the monitoring of more than 10,000 cases of cholera in Syria since the outbreak was first announced on September 10.

The Syria Response Coordinators (SRC) warned communities in northwest Syria that the number of camps suffering from a lack of water has risen to more than 658 out of the 1633 camps spread across the area. 34 new camps have stopped receiving water support by humanitarian organizations in light of the increasing outbreak of cholera in the country.

Representatives from the SRC said in a statement that the new camps within the Afrin area north of Aleppo, which are suffering from a myriad of other difficulties, most notably, the Coronavirus, are the most hard hit. The camps have seen over 2,864 infections since the beginning of this year, a large chunk of the 10,665 infections in the region of northwestern  Syria.

The statement warned all parties of the repercussions of leaving the water crisis untended, especially in light of worsening living conditions, the high cost of drinking water in many cities and rural areas, and the presence of a large percentage of the population that does not have access to clean drinking water on a regular basis. These issues pose a real threat to the social and economic stability of the resident populations or will force them to migrate in search of sustainable access to sufficient quantities of relatively clean water.

Camps left to fend for themselves

In an interview with NOW, Idlib’s Health Director Salem Abdan, said that there is an alert at the Directorate of Health in Idlib, as well as all health directorates, in addition to the World Health Organization and the Health Cluster, a branch of the WHO dedicated to providing medical assistance in humanitarian emergencies, to face the epidemic by tracking all suspected cases and equipping centers with treatment capabilities.

Abdan stated that there have been 42 confirmed infections and one death since the outbreak was detected. The number of suspected cases is at 600, including 117 on Wednesday.

Idlib’s Health Director concluded by saying that the health sector in northwestern Syria has been subject to immense pressure by the Syrian regime and Russian forces. Hospitals have been bombed and doctors and pharmacists have been targeted. He makes a plea for support from the international community.

A resident of the informal camp of Ahl al-Tah camp in rural Idlib, Abdul Salam al-Yousef, told NOW that the camp sources its water from manholes nearby, which are not sterile and contain traces of chlorine. He claims that most camps do not have a sewage network, and laments the lack of effort by concerned authorities to provide the appropriate health environment for camp residents.

The lack of a sewage system in the Ahl al-Tah camp causes swamps of wastewater, which residents then use for washing. These unsanitary conditions attract insects and cause widespread cases of severe diarrhea and an uptick in new infections – particularly those affecting children – such as skin pemphigus and lung ailments.

Residents of Al-Tah have appealed several times to organizations working in the service field, asking for the provision of a sewage network, clean water, and accessible electricity, and they have all but been ignored.

Residents of the camp were aware of the risk their living conditions posed.   Groups met to discuss strategies for prevention but only so much could be done, and the necessary humanitarian aid and intervention never came. Panic spread among residents of the camp, some of which were forced to resort to washing with dirt.

The issue, however, is not contained to northwestern Syria. After 11 years of war and conflict, Syria is witnessing a severe water crisis and drought in all its regions brought about partially by the destruction of water and sanitation infrastructure. The head of the European mission, Dan Stoenescu, pointed out on the morning of Tuesday, September 11, via Facebook, “the conflict has destroyed two-thirds of the water treatment plants, half of the pumping  stations and a third of the water towers creating now a lack of proper sewage networks or mains drinking water.”

The UK-based Syrian Observatory for Human Rights also announced in early September the spread of the disease in the western parts of Deir Ezzor, after local authorities stopped adding chlorine to water pumping stations

The Autonomous Administration in northeastern Syria attributed the cause of the cholera epidemic to the low water level of the Euphrates River, and the co-head of the Health Authority of the Autonomous Administration, Dr. Gîwan  Mustafa, confirmed that the analysis carried out on the waters of the  Euphrates River proved the presence of the bacteria, “Dhamma al-Hayda,” responsible for cholera. He warned of a catastrophe due to the low water level in the Euphrates River, and the interruption of water from the city of Hasakah.

Mustafa claimed that the tests carried out proved the presence of cholera in  the waters of the Euphrates River, accusing Turkey of “trapping the river’s water, turning it in many areas into swamps.”

He pointed out that the analyses carried out proved the presence of the bacterium in the western countryside of Deir Ezzor and Raqqa, adding that many vegetables are grown near the river and watered from it – this will cause the disease to easily spread.

Mustafa stressed to the people in northeastern Syria “not to drink from the  Euphrates water or use it for watering, and to use means of protection such as  personal hygiene, the use of chlorine in water refineries, sterilization of   vegetables, and to cook them well before eating them.”

The Early Warning and Epidemic Response Network released its latest statistics last Thursday. In the areas of Peace Spring, which is controlled by the Turkish government in northern Syria, the number of infected people was 24 confirmed cases with around another 132 suspected cases, while the areas of northwestern Syria recorded seven new cases of the disease, raising the number of confirmed cases to 49 and indicated that the suspected cases of the disease rose to 657 after evidence suspecting 52 new cases. The network announced the registration of three new cases of cholera in the areas of northeastern Syria, one in Raqqa and two in Deir Al Zour, bringing the number of confirmed cases to 140, and reported that suspected cases of the disease rose to 9,037 after registering 403 new suspected cases. The Ministry of Health reported on Tuesday night that the cumulative total number of confirmed infections has reached 594 cases distributed over 11 of the total 14 governorates in the country, the largest number of which is in Aleppo province.

The last outbreak of cholera inside Syria was recorded between 2008 and  2009 and was contained specifically in the governorates of Deir Ezzor and Raqqa, according to the World Health Organization. At that time, the Syrian medical sector had the capacity to cope with the outbreak of the disease, but today, the reality created by the war has rendered the circumstances completely different.

An outbreak across the border

Lebanese Health Minister Firas Abiad said on Friday that authorities were examining suspected cholera cases in Lebanon, less than a day after the state confirmed the first case of the disease since 1993

The news came almost a month after news of the outbreak in neighboring Syria. Abiad stated in a press conference that the first case was a middle-aged Syrian refugee living in the northern province of Akkar, and confirmed the existence of a second case in the same area, and other suspected cases, noting that cholera is an easily transmissible disease. Around 1.5 million Syrian refugees reside in Lebanon, most of whom live in informal camps or overcrowded quarters.

Mouneb Taim is a Syrian photojournalist covering stories with a specific focus on social issues. You can follow him @mouneb_taim.