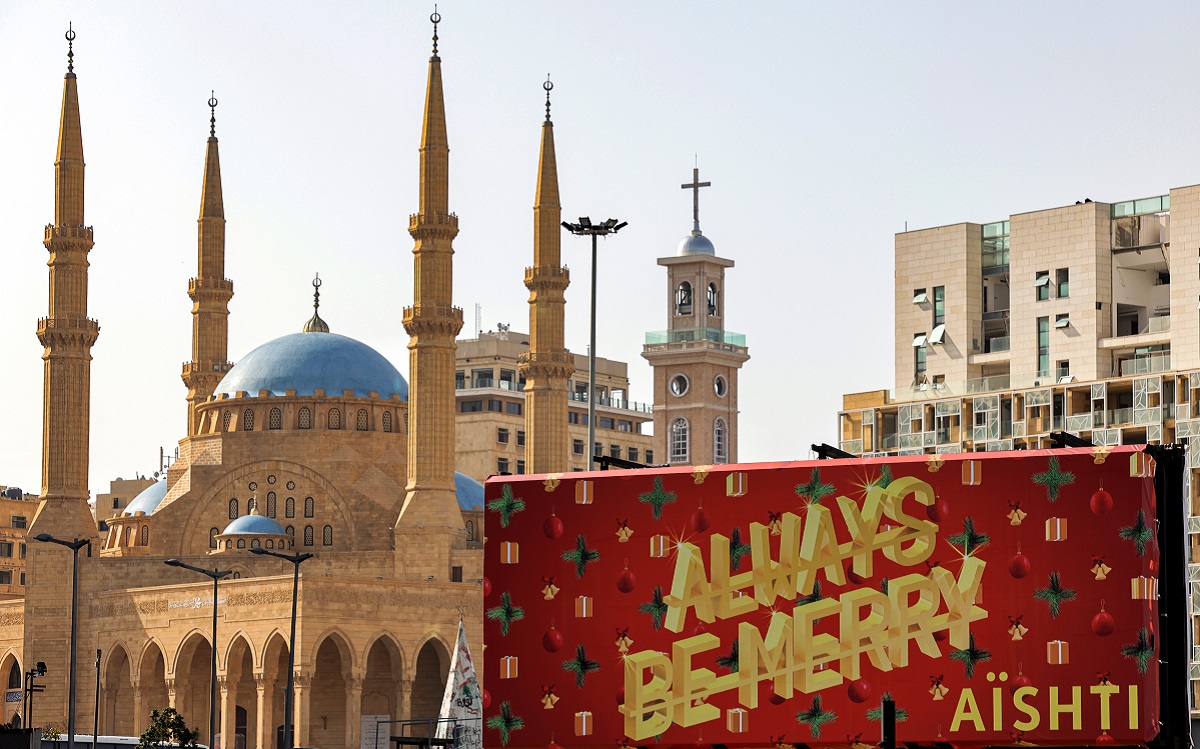 Christmas greeting billboard in the Martyrs' Square in the centre of Lebanon's capital Beirut, near the Mosque of Mohammed al-Amin and the Maronite Cathedral of Saint George (background). Photo: Joseph Eid, AFP.

I was Santa this year. Thousands of us carrying suitcases at the Rafik Hariri International airport are this year’s Santas. We also haul them up the stairs in the middle of the night, in the dark, when the generator takes a break to save fuel. The dawleh is sometimes on and sometimes off. It was off in my case.

I happened to be abroad for the past month. As I returned to Lebanon for the holidays with my family, I filled two suitcases with instant coffee, toys, and clothes, socks and winter shoes for the kids, books, sanitary pads, and over-the-counter ibuprofen-based meds, anti-inflammatory creams, and vitamins. My other relatives who arrived from Dubai have also brought several suitcases filled with provisions for the winter. Everyone has done the same.

Christmas doesn’t feel like Christmas this year, no matter how much we try to put on the Christmas market show and give our children the impression that there is room left to dream.

Has your house been damaged? Was anyone hurt? Have you rebuilt? It’s how we say hello in Beirut this Christmas, as we wear the masks at the small Christmas market in Mar Mikhael, almost seventeen months after death swept the city. Last year we didn’t have the chance to talk, we were still afraid of the virus and self-isolated.

The young are still partying in the streets. But inside the homes, holiday conversations more often than not revolve around emigration – who has left, who wants to leave, and who “is crazy enough to stay”.

At least we’re alive, many whisper instead of goodbye.

Beirut has lost its holiday glow, as more and more “for rent” and “for sale” signs have appeared in places once booming with life and businesses. It’s Santa closed, as AFP’s Jean-Marc Mojon has put it in his piece describing Christmas preparations in Lebanon last week.

It’s not just the lack of electricity. Gloom is also a state of mind, when a population has been victimized, abused, and murdered under the political pretense that “it’s okay, they’re martyrs”.

I am not sure why Lebanese dignitaries insist on taking every foreign official that visits Beirut to see the destroyed silo in the Beirut port. It feels like a scam: selling the story of the grief to convince the international community to release the aid sooner. It’s unsettling, just like the plans to build a mausoleum in the destroyed port.

UN Secretary-General Antonio Guterres has also visited on Monday the marker of death (as Ronnie Chatah calls the silo). But his visit was to a graveyard, not to a disaster zone. He is probably the first international figure to pay his respects to the people who perished, rather than admire the destruction.

UN Secretary-General pays tribute to victims of the #beirutblast. Two of the youngest victims were the children of @UN staff, including my son Isaac. https://t.co/StLqjOx4BY

Messages: “I have come with a simple message: the UN stands in solidarity with the people of Lebanon,” Guterres told a press conference with Lebanese President Michel Aoun. “Seeing the suffering of the people of Lebanon, Lebanese political leaders do not have the right to be divided and paralyze the country,” he added.

He said the objective of his meetings would be “to discuss how we can best support the Lebanese people to overcome the current economic and financial crisis and to promote peace, stability and sustainable development”.

Guterres said some nice words. But the truth is that it will be a while before the people of Lebanon will see anything concrete happening. Possibly a generation or two. The biggest obstacles to the implementation of any solution for the Lebanese crisis have hit the wall of impunity. Not just impunity for the August 4 blast, but for many murders and assassinations as well as for official graft. Noone will strike a deal any longer with any government in Lebanon, as long as the country hosts and protects an armed group like Hezbollah.

Weapons held outside the state will always be a threat to any type of stability and development, everyone knows it, the entire world agrees with it, and no matter what  one calls an armed group and how they justify its existence, the result is the same: no real progress.

What if: Yes, it’s difficult to solve the problem of Hezbollah. But, if one looks outside the region, there may be lessons to be learned from other places where the state has negotiated the disarmament of an armed group – the most recent case being Colombia. Yes, there are differences between the two countries,  and it was not an easy negotiation process (especially because of the transitional justice matter, given that Colombia has signed the International Criminal Court Treaty and there was no way of getting amnesty). It took political will at the regional level, and it took Cuba agreeing to host the talks. Peace with the FARC is still not fully normalized, the society is still polarized, and other factions are still fighting. But there are lessons to learn from the  peace negotiations process, and others before it – South Africa, El Salvador and Northern Ireland.

Disagreements between Lebanon’s government, central bank and banking sector over the size of the losses contributed to the collapse of negotiations with the fund over a new loan program last year, a step seen as essential to the country’s efforts to emerge from a severe economic slump.

Deputy Prime Minister Saade Chami told AFP that officials have agreed that financial sector losses amount to “around $69 billion,” though he described that as an estimate that could change.

Rice said the Washington-based crisis lender is “now assessing the government’s announced figures, and we’ll continue our discussions with the authorities in the context of the engagement.”

An IMF team will travel to Beirut early next year to continue the discussions, he said.

A generation at risk

Lebanon’s spiraling economic crisis is causing abuse against children to soar and is putting one child out of two at risk of violence, the United Nations said on Friday.

“One in two children in Lebanon is at serious risk of physical, emotional, or sexual violence, as families struggle to cope in the country’s deepening crisis,” UNICEF said. Read the full report here.

A new report released by UNICEF showed that the number of cases of child abuse and exploitation handled by the agency and its partners shot up by 44 percent over the past year. Children as young as six are working on farms and families seeking dowries are marrying off young girls.

Collapse begets violence, NOW’s Sally Abou al Joud wrote a few months ago. Crime has been on the rise for months in Lebanon, with people taking justice into their own hands as trust in state institutions collapsed. Tribal laws are many times prioritized over state law, and family vendettas are carried out on a daily basis. So often that they are no longer making headlines, because, although many times they end with injury or murdered, they are not politically motivated.

But the case of the bank robbery in Zalka, a suburb north of Beirut, reminds one of 1920s Chicago. Or – a more recent reference – The Money Heist.

The Beirut heist: The robbery last Tuesday targeted a branch of Byblos Bank and left one employee injured, the NNA reported at the time.

The number of robberies in Lebanon has more than doubled in the first 10 months of 2021 compared with last year, according to the Internal Security Forces, quoted by AFP.

The retaliation: Two suspected bank robbers jumped to their deaths Thursday during a Lebanese army raid on their apartment in Al-Amrousiya neighborhood, Choueifat.

“The army patrol was hit by live fire, and two members of the gang tried to escape, so they deliberately jumped of the balcony of their fifth-floor apartment which led to their immediate deaths,” the NNA said.

The third suspect was arrested.

During the operation, the army seized narcotics, weapons and ammunition. Troops also confiscated motorbikes, masks, gloves and outfits that the suspects allegedly used to carry out the bank heist, the NNA said.

We are proud to announce that #Lebanon is now connected to the #EU system with its Digital #COVID19 Certificate!! As of today, Lebanese digital vaccine certificates are accepted in Europe and vice versa. It is a big achievement that will facilitate travel and communication. 1/3 pic.twitter.com/w2uErDfuSP

Al-Wefaq, Bahrain’s leading opposition party until it was dissolved by the judiciary in 2016,, has close links with Lebanese Shiite movement Hezbollah

In Beirut last week, the group denounced what it said were human rights violations in the kingdom, local media reported.

In response, Bahrain’s government denounced “the promotion of malicious allegations and causing harm to the Kingdom of Bahrain”. Interior Minister Bassam Mawlawi on Wednesday directed security officials “to take the measures necessary to expel from Lebanon the non-Lebanese members” of Al-Wefaq, it added.

In 2011, a mainly Shiite protest movement took to the streets of Bahrain to demand an elected government, briefly threatening the Sunni monarchy’s grip on power before a deadly crackdown.

Al-Wefaq was later dissolved over allegations including “harboring terrorism”.

Back to Hezbollah: A GCC summit last week ended with a declaration calling for an end to Hezbollah assistance for Iran-backed armed militias throughout the region.

The booster shot: Michael Haddad, a Lebanese athlete with motor paralysis, spoke in Rome about his mission to walk 100 km on crutches in the Arctic, in Norway, carrying a book from the Pope to the world’s largest seed reserve to raise awareness about global warming.

Ronnie Chatah spoke with political activist Asma Andraos for last week’s episode of The Beirut Banyan. Watch them here. Asma Andraos is known among 2005 Cedar Revolution activists. After the murder of former PM Rafik Hariri she gathered a group of friends and attended the funeral with posters reading “It’s Obvious, No?”.  She was also part of an initiative that launched a petition at Hariri’s gravesite calling for the withdrawal of the Syrian army.

Agenda: The Constitutional Council is set to rule on Tuesday on an appeal filed by Strong Lebanon bloc MPs against the amendment to the electoral law that moved the elections from May to March 27. President Aoun has refused to sign the decree and, unless he signs it by December 27 (which is rather impossible), elections will be pushed until May.