Theft, armed disputes, and sectarian tensions are more pronounced as three-quarters of Lebanon’s population become trapped in poverty, but experts say impoverishment is not solely to blame. 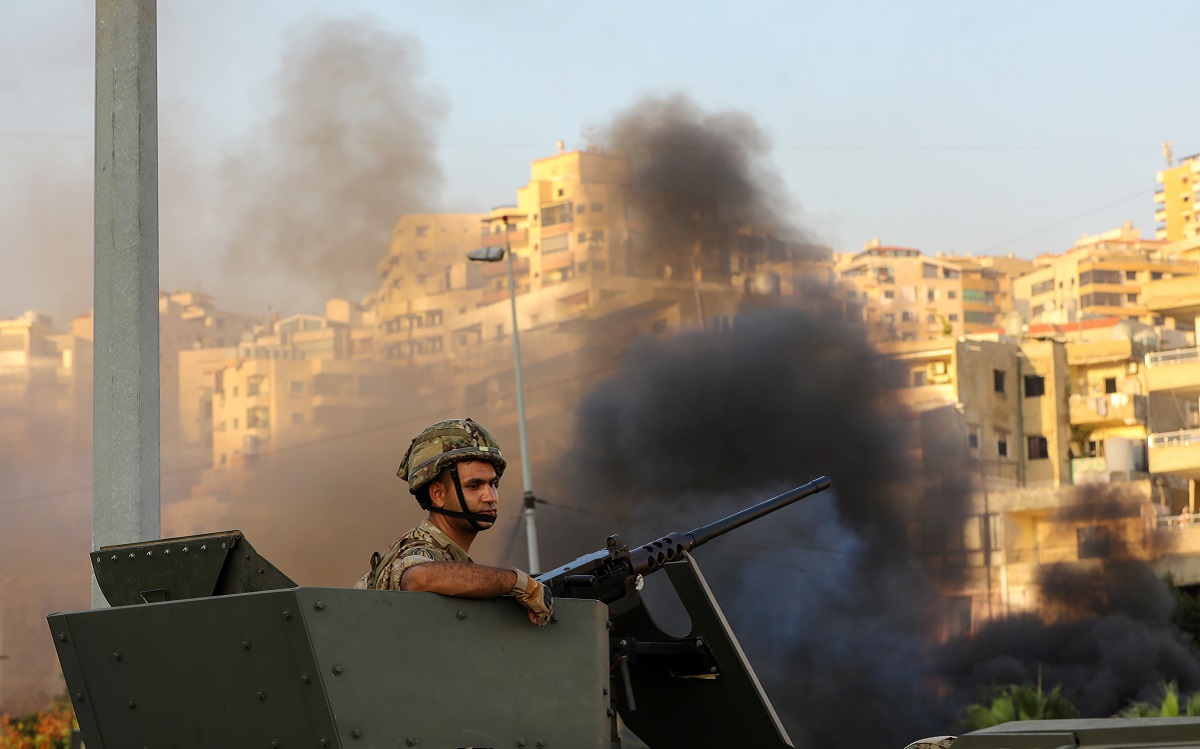 A Lebanese soldier sits in an armoured vehicle as the army deploys amid clashes in the Khalde area, south of the capital, on August 1, 2021. At least five people including three Hezbollah members were killed south of Beirut when a funeral procession for a party member was ambushed. Photo: Anwar Amro, AFP.

After waiting six hours in a line to fill up his car’s almost-empty fuel tank, Moustapha Itani, drenched in sweat, marched to the front of the line to find out what was causing the holdup. Lebanon has been seeing long lines at petrol stations due to fuel shortages, but the one Itani was stuck in was only a 300-meter queue, relatively short, so he had anticipated less of a wait.

Itani, 33, says he watched in disbelief as cars emerged from two nearby parking lots wriggling past vehicles toward the gas pumps, patrolled by what appeared to be gang members who blocked the main line using a traffic barricade and swayed a wooden club intimidating anyone who dared to hamper their queue-jump.

This scene, along with a surge in crime and civil strife in an omnipresent sectarian climate, is becoming ever more common as the Lebanese population plunges deeper into poverty, but experts argue impoverishment is not the only predicament to blame.

The crippling devaluation of the Lebanese pound is terminating Lebanon’s middle-class, creating social disruption and establishing a colossal gap between the affluent and the underprivileged. Meanwhile, the national crises and shortages in public utilities such as electricity, gasoline, and water, are steering a course of instability and driving people to fight over scarce resources.

Three-quarters of Lebanon’s residents are now poverty-stricken, and 82 percent of the population, nearly doubling from 42 percent in 2019, are living in “multidimensional poverty” with lamentable access to health, education, and public utilities, according to a report by the United Nations Economic and Social Commission for Western Asia (ESCWA).

“Those who need to eat might resort to theft and violence, and those who have the money can afford not waiting in line,” said Itani who decided to turn to the black market for his fuel supply. He says he was too unnerved by the thug who pounded his stick against the ground threatening to wreck Itani’s car when he protested the mischief at the gas station.

Crime on the rise

According to Information International, a leading Beirut-based regional research and consultancy firm, murder and theft crimes soared by 144 percent in January and February 2021, compared to the same period the year prior. A report by the Internal Security Forces released in 2020 found a 147 percent jump in car robberies and a 113 percent increase in car thefts since the onset of the crisis in 2019.

Though there is an uptick in street crimes, Rima Majed, an assistant professor of sociology at the American University of Beirut said, “There’s a crime at the top of the chain – our economic crisis today is literally due to the theft of money at banks that was done so blatantly. When there’s such crime at a higher level, I think low-intensity crime becomes, to my understanding, less shocking, less important in terms of the implication. The implication of organized crime is much bigger on society than small clashes here and there.”

“Judicial authority is weakened and the public sector is on duty less frequently today so people are taking matters into their own hands.”
Mohammed Saifeddine, Lebanese Economic and Social Council

Ramzi Malti and his partner were preparing to escape the city’s swelter and power cuts when in place of their parked car, they found broken glass scattered around.

Malti was supposed to be notified when the concerned unit commenced its search for his stolen car. It has been almost a month, yet no one has reached out to him.

He blames civil disorder and Lebanon’s incompetent security measures for his car’s disappearance. Upon reporting the theft, the ISF told him his car’s make, Kia, as well as Toyota and Hyundai, are frequently stolen and smuggled to Syria because their parts are in high demand there. After confirming to the police the car was topped up with gasoline, Malti was told it is most likely in Syria.

Despite being backed by western nations, the Lebanese army and security forces were not immune to the country’s collapse. Their basic monthly salary dropped to around $70 as the Lebanese pound lost 90 percent of its value, and this is affecting their morale and creating concern of service member desertions.

“Judicial authority is weakened and the public sector is on duty less frequently today so people are taking matters into their own hands,” said Mohammed Saifeddine, director-general at the Lebanese Economic and Social Council and a professor of political economy at Lebanese University. “We are witnessing this with certain municipalities, neighborhoods, even buildings. This is a standard consequence to what we are going through.”

Intending to curb thefts, homicide, and erratic gunfire amid drastic security deterioration, officials in Tripoli, Lebanon’s poorest and second biggest city, took measures to ban scooters between 10 p.m. and 6 a.m. in the city.

“The issue is not a direct or a pure security issue. The solution to controlling the chaos, from clashes over gasoline in the villages or the cities, is not merely a military one, but rather an economic and a social solution complementary to the strong presence of authority,” Saifeddine said.

Battered by a 15-year civil war, the Lebanese learned to speak their language with a sectarian accent fueling tensions high and low through the years that succeeded the war, not least the past months when the country, mired in a financial meltdown, saw several notable sectarian flare-ups.

Six people were wounded after clashes, centered over fuel shortages, ramped up between the Christian village Maghdouche and the Shiite village Anqoun. The violence, however, was soon condemned by both Shiite and Christian leaders who invoked de-escalation efforts.

Majed said these developments are not always a consequence of poverty, but rather a manipulation of the situation by those in power in a sectarian society.

“People will resort to all sorts of violence or whatever is considered to be out of law because there is no law.”

“People will resort to all sorts of violence or whatever is considered to be out of law because there is no law.”

A week earlier, near Khalde, a town south of Beirut, people took refuge in their bathrooms and hallways amid heavy gunshots that lasted hours and killed five during a Hezbollah funeral procession. Ali Chebli, the man being mourned, had been killed the day before by a Sunni Arab clansman in a deadly vendetta to avenge the murder of a boy from the clan the year prior by the Shiite group.

When citizens are pushed below the abject poverty line, sectarian sentiments heighten and the nourishment of sectarian alliances intensifies, Saifeddine explained.

The fall of Lebanon’s middle-class

“The price of items was doubling every month and we could no longer cover the losses,” she said. “We were losing capital.”

She has temporarily moved, along with her family, to her parents’ house in Beirut when her salary, which took a nosedive on the foreign exchange rate and plummeted to $80 a month, could no longer sustain her commute back and forth to her house in Saida, in the South Governorate.

In a bid to ease dire shortages, Lebanon’s leaders took the decision last month to partially lift fuel subsidies and finance the rest through a $225 million central bank fund until the end of September.

But the decision was insubstantial, spelling higher prices for gasoline and driving thousands to carry on scrambling for and fighting over scarce and overpriced resources. It also forced Hashash to drastically change her life when she would otherwise have to spend three-quarters of her salary to drive to work only once a week.

Fuel shortages have prompted Lebanese en masse to relocate their stalled lives to a relative’s house either because it is closer to work, receives more generator power, or both.

Majed said this internal displacement coupled with the worsening emigration are changing the fabric of society and more research is required to tell what the repercussions will be.

“I keep convincing myself that we haven’t hit rock bottom yet like other people who are more desperate for help.”

Hashash wasn’t the only one subject to life transitions in her family. Her 20-year-old twins were moved from private to public schooling along with 90,000 other Lebanese students since the crisis began in 2019.

Like any middle-income family in Lebanon, Hashash’s salary combined with her husband’s “used to be enough to cover our family’s livelihood and to enroll our kids in a proper school before the crisis,” she said.

Not accustomed to relying on financial or food aid, many middle-income families consider maintaining their social standing a crucial matter. Hashash struggles with the idea of receiving any sort of assistance from charities.

“I keep convincing myself that we haven’t hit rock bottom yet like other people who are more desperate for help,” she said.

Others have succumbed to reality.

In a sealed white envelope, Nabil Hajjar, a nurse with three kids and an unemployed wife, receives LL300,000 intermittently from his sister-in-law. He is now dependent on money handouts in addition to food parcels and grocery coupons after the crisis swallowed 90 percent of his once-comfortable salary’s value while simultaneously, the price of daily necessities skyrocketed.

Hajjar now makes sure his kids are indoors before sunset as a precaution to avoid prowlers and muggers who he says are on the rise where he lives in Chehime, a town in the Chouf region.

His car, stationed under his home, has been housing an empty tank for months as defenseless Hajjar keeps avoiding risky trips to the gas station. But the bigger challenge lies in the fact that commuting to work only 12 times a month would now cost him 20 percent more than his salary as fuel prices soared fivefold since the onset of the crisis.

Under the pressure of poverty and its repercussions, people are adopting self-defense mechanisms and obtaining personal arms to fend for themselves, Saifeddine said. He added that people are stashing away guns in their stores or homes and sometimes showing up with weapons at gas stations.

Despite the common belief that poverty and crime are concurrent events, Majed attributes the surge in violence to the disintegration of the state in addition to the financial crisis.

“You can find poverty in societies that are very communal where there’s solidarity, so it’s not only about poverty but it’s also about lack of alternatives that would make the everyday possible,” Majed said.

On Friday, the Lebanese presidency announced the formation of a new cabinet headed by Prime Minister Najib Mikati after a 13-month deadlock. The 24 new ministers were assigned based on their political affiliation connected to the entrenched sectarian system. While this might mean some sort of stability, analysts are doubtful the new government will introduce any significant reform.

“The environment around these armed disputes and theft incidents is supposedly now altered with the announcement of the new government and the prevailing mood is a little more positive,” Saifeddine said. “However, if this new government fails to mobilize fast solutions that would restrain the pace of the collapse, we are going to see more of these events.”