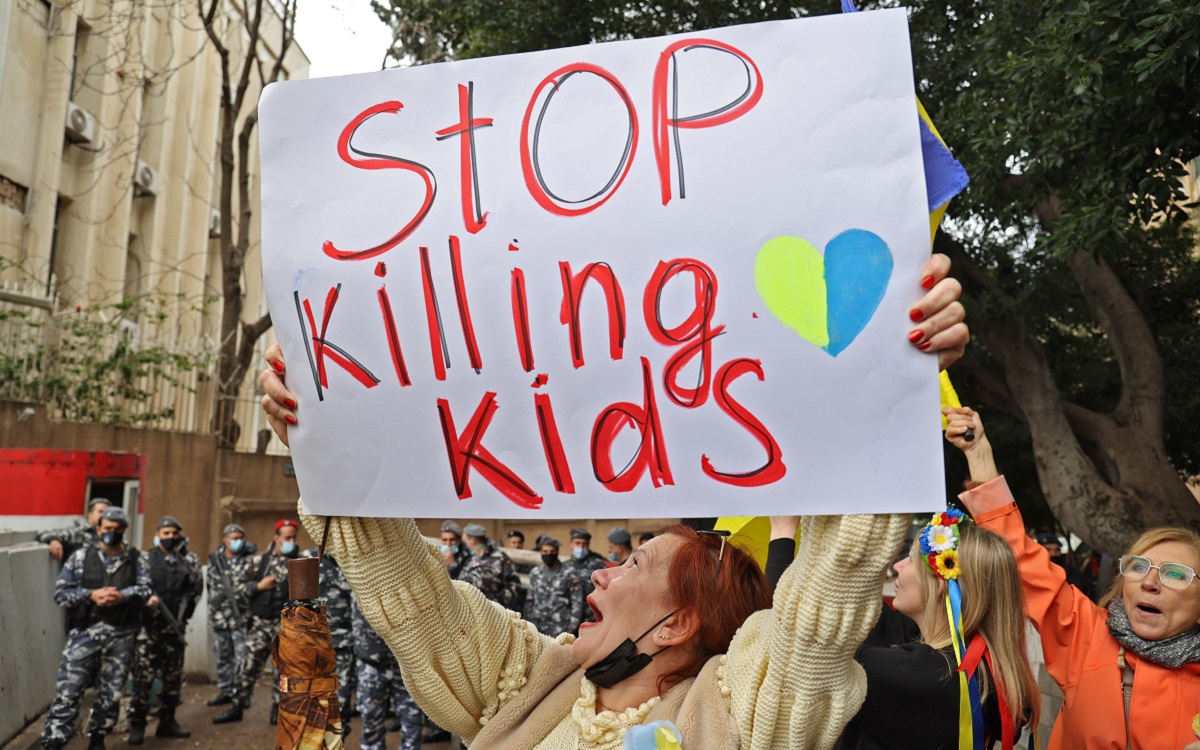 Lebanese join Ukrainians living in Lebanon during a protest against Russia's invasion of Ukraine, outside the Russian embassy in Beirut, on March 9, 2022. Photo; Anwar Amro, AFP.

The war in Ukraine rages on, US says Russia is asking for help from China, and Ukrainian refugees are pouring into neighboring countries.

Criticism of European nations mobilizing to the aid of the displaced Ukrainians also goes on.  But what they all leave aside is the fact that it is not the Romanian and Polish states that are mobilizing, but the civil society. The same civil society organizations and the same people who also struggled to accommodate refugees for years and years. Their efforts may be more visible because the media is more active and reporters have generally more access on the ground than they have ever had in any Arab country.

It may look like civil society is more active in Europe now, but the war is also closer. As I was saying in last week’s briefing, people are built to help relatives, friends, and neighbors before they help people they have little cultural links to.

Unfortunately, states educate citizens still in the “us” and “them” spirit. Romanians and Poles are behaving, generally, as most human beings would under these circumstances. They are helping their neighbors because they understand the reason they are now at war with Russia. They understand why they are resisting and why they are running for their lives.

Syrian refugees led to Turkey, Lebanon and Jordan, their neighbors, in 2011-2012. While I have seen simple people in rural regions of Wadi Khaled and Arsal taking refugees into their homes at the beginning of the crisis, while some civil society activists tried to gather aid and offer accommodation, most Syrians in Lebanon live in tents over a decade into the crisis. Abby Sewell reported on it last week. It’s dramatic. Palestinian refugees are denied the right to work and support their families and live in overcrowded camps.

Syrian girls have been sold for cheap to rich men from the Gulf to save their families of hunger and women were left alone in the world, after their husbands were killed by Russian and Syrian government barrel bombs, to feed their children off with 5,000 LBP per week.

In Turkey, their situation is not much better.

A little girl stands in front of her snow-covered tent at a camp for internally displaced Syrians In Idlib, by the border with Turkey.

And images of Jordan’s Zaatari camp remain in our memory together with other symbols of segregation.

Politics is complicated in the Middle East, yes. But each region of the world has its own complicated issues.

It doesn’t mean that Europe doesn’t have a racism problem. There are groups in society that are pretty much against every minority and all foreigners. But l the Middle East is not any better in that regard.

And there are people in Lebanon who have treated Ukrainian women in the most despicable way and have made jokes on social media, objectifying them. Dana Hourany wrote about those stereotypes for Fanack.

But this also doesn’t mean there are no voices to fight against that racism in both places.

Eastern Europe is a place with a complicated history and many traumas suffered at the hands of various empires. It is a place as complicated as the Middle East. Let us not compare who’s suffering more, it is not a contest. Let’s lean on each other and help each other. And, first of all, help the people who do knock on our doors and ask for help, whoever they are.  As much as we can.

Cash crisis: Lebanese supermarkets, the few places where the Lebanese could use bank cards, now only accept 50 percent of the payment with a debit card and are demanding the rest in cash. The reason is that the Central Bank, the same one that infused dollars in the economy, realized that there isn’t enough local currency, did not print more money, and only 50 percent of payments are allowed with bank cards. Due to this new realization by the wise men at the Banque du Liban, companies may not be able to pay their employees and suppliers. The cash crisis will also turn off generators, as most companies and private households will not have the cash to pay for electricity.

No government official has addressed the matter yet in any coherent way.

One more UN report:  L’Orient Le Jour writes that the UN Security Council will discuss on March 17 a secret report where UN Secretary-General Antonio Guterres calls for reforms and transparency in Lebanon and asks the international community to help Lebanon’s rulers to implement those reforms. The news piece is here.

There is, however, nothing beyond the news and nothing the international community can do, because everyone in Beirut is completely deaf to these calls. Ears only open when money comes in.

It is also a way of saying that, if nothing really happens, it is also up to the Lebanese to replace those people in power with others who are willing to be transparent and to make the required reforms. Unfortunately for those who are running in the May 15 elections, they will also be sacrificed as politicians for they will have to pay the price of the reforms that will be hard to implement, will leave behind groups of population that cannot adapt to the new reality and will leave room for harsh criticism in the years to come.

Reforms are not miracles. It gets much worse before it gets better and it also, sometimes, takes decades to reform a system that has been running on nepotism and client-patron relations for probably centuries. The Balkans are still struggling with reforms, and so are the Eastern European countries, including currently war-torn Ukraine.

Lebanon is in for a long and really difficult ride and none of the candidates invoking change are talking about that – meaning they are not really talking about how they are going to implement reforms. I had a conversation with NOW’s reporters who have been interviewing candidates for the May 15 elections. So far, regardless of who the interviewee was, it has been really difficult to get them to talk about what the reforms they had in mind were. Most remained brief in their answers and kept sending the reporter to their group’s political program.

While new and improved political programs are necessary –  those are a set of principles,  not concrete plans. We know everyone wants to save the economy and reform the justice system. The question is how. What kind of policies have they come up with to do so? That’s not what the World Bank is going to do. That is what the next Lebanese government is supposed to go to the negotiations with.

At this moment we don’t really know who wants to do what and what kind of austerity measures we are to expect from each of the groups running for the May 15 elections.

Not many registered: More than 500 candidates, out of which only 69 are women, have applied to contest Lebanese parliamentary elections on May 15 by late Friday, the New Arab reports. However, most factions submit their lists the last day, as political negotiations are going on until the last minute.

As of today, there are 621 registered candidates for the parliamentary elections – 540 men and only 81 women. All of those who had the power to promote, encourage, and arrange a stronger participation of women among candidates failed miserably.

Opposition coalition: Minteshreen, Taqqadoum, The National Bloc, Amam Lebnan and Amieh 17 October have forged an alliance and announced it on March 12.

Fantastic energy during this afternoon’s event. The May elections won’t be the magical solution to all our problems but they are a critical chapter in the long-term battle to regain our country from this regime. @minteshreen @Taqaddom1 @Amamlebnan @nationalbloc_lb @Aamieh17oct pic.twitter.com/VOuzAgjRIV

Not running: Prime Minister Najib Miqati and ex-PM Fouad Saniora will not run personally in the upcoming parliamentary elections, but will sponsor a number of electoral lists, sources close to the club of prime ministers said.

Defiant: The Amal Movement also registered its 14 candidates on Monday. The list included the two former ministers indicted for incompetence in the Beirut blast investigation, Ghazi Zeaiter and Ali Hassan Khalil. The message is pretty clear. The question is, however, whether the constituencies they run in care about the residents of Beirut who died in the blast.

The EU is recruiting observers:

New letter to the UN: 120 victims of the Beirut port explosion are requesting the UN intervene to support Lebanon’s domestic investigation into what happened and who was responsible.

STL appeal: The Hague-based tribunal found two Hezbollah members guilty on appeal for the 2005 death of former Lebanese prime minister Rafic Hariri, saying both were involved in the bombing that killed him.

Appeals judges at the Netherlands-based court said trial judges “erred” in 2020 by acquitting the two men, together with a third, in finding that there was a lack of evidence.

Leaving: The economic crisis in Lebanon has seen hundreds, if not thousands, of migrant domestic workers enslaved and unable to return home.

Between September and February, we oversaw repatriation of 60 migrant domestic worker sisters, bringing the total number of women whose repatriation costs we covered to over 700. Many of them were imprisoned, had illnesses and are single mothers. pic.twitter.com/dop4kGAkcd

Podcasts: Ronnie Chatah spoke to Ukrainian Ambassador to Lebanon, Ihor Ostash, and the episode is online here. The conversation takes one back to the most important episodes of Russian meddling in Ukrainian affairs, as of the 2004 Orange Revolution. It also makes an interesting parallel between Ukraine and Lebanon. The host and the interviewee also share a moment of darkness, but choose to continue their interview regardless of the lack of electricity.

The Happy Hour Show’s Ramzi Abou Ismail talks to Jad Ghosn days after the former journalist and podcaster announced he was running for office on the lists of the Citizens in a State movement.

Sarde after Dinner’s Medea Azouri had … dinner with The Beirut Banyan’s Ronnie Chatah. The podcasts skipped an episode due to technical difficulties.