Your weekly round up from NOW. 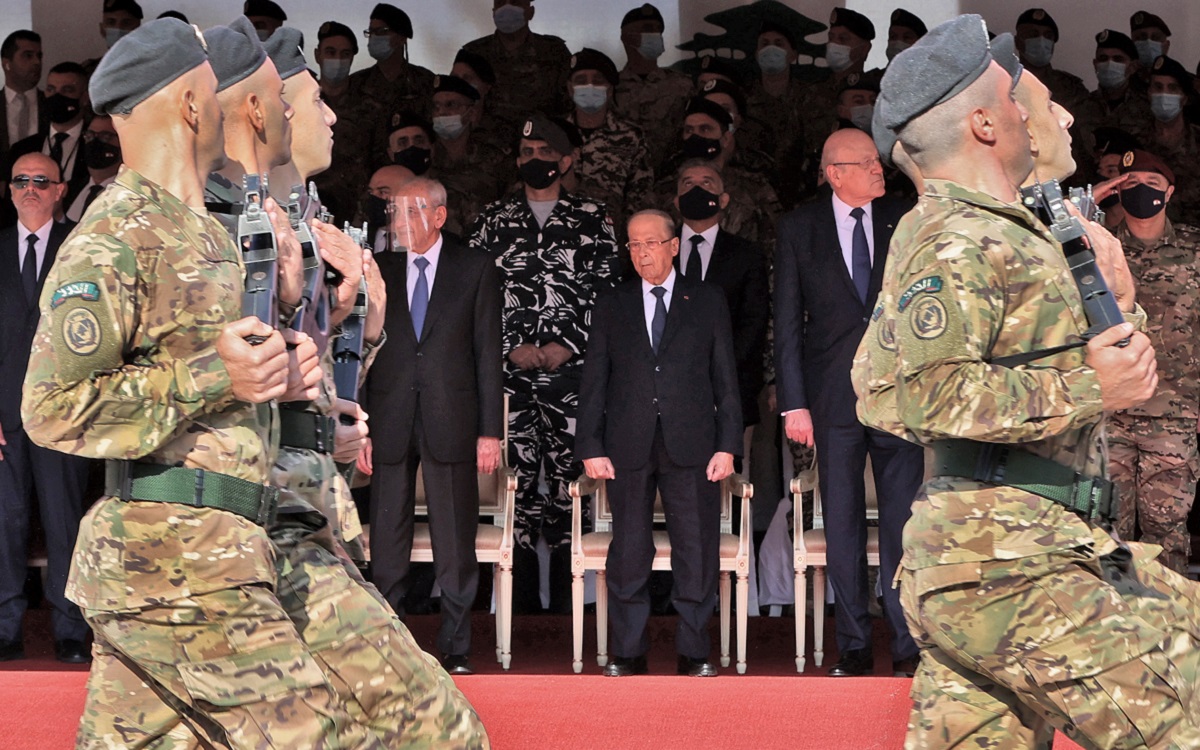 On November 22 Lebanon officially celebrates its Independence Day with a military parade. Most Lebanese celebrate it by going away for a long weekend. It’s a day off, when public institutions as well as banks are closed.

Independence Day commemorates the end of the French Mandate in Lebanon in November 1943 and the emergence of the state of Greater Lebanon.

But in fact, what many Lebanese have argued and are still arguing is that even post 2005, after the Syrian withdrawal, Lebanon has hardly ever been truly independent.

This column in NOW by Ronnie Chatah looks at the regional winds and forces and how they stand against change and reform in Lebanon.

The “empire” strikes back: After two years of winning the leadership of the Lebanese Bar Association, independents and reformists have experienced a setback.  Nader Gaspard, an independent candidate supported by Amal Movement, Future Movement and The Free Patriotic Movement, is the new head of the Bar Association after Sunday’s elections.

He replaces Melhem Khalaf, an independent candidate whose election two years ago was widely hailed as a victory for the 2019 protest movement demanding a political overhaul. Lawyers from the 2019 protest movement who spoke to NOW commended  Khalaf’s leadership. The Bar Association has helped support opposition activists and helped collect and process hundreds of criminal complaints from victims of the August 4 Beirut blast in order to press for accountability of the state.

But on Sunday, lawyers backed by the country’s opposition groups also failed to clinch a single seat on the association’s nine-member council.

It’s still early to say what exactly this may mean for the Bar Association, but it has definitely worried the opposition a few months before the legislative elections in 2022.

A record: Nearly 245,000 Lebanese living abroad have signed up to vote in next year’s parliamentary polls, Lebanon’s foreign ministry said Sunday, after it closed the window for registration.

Lebanon’s diaspora – estimated by many to number at least three times the country’s 6-million population – will take part in the vote for the 128-seat parliament, making them a powerful electoral force.

Europe accounted for the largest number of registered expat voters, with nearly 75,000, followed by Asia with 61,000 voters, and North America, where 60,000 signed up, the foreign ministry said in a statement.

Why the number is meaningful:  In the 2018 parliamentary elections, the turnout was rather low- 49.7 percent. According to a study by the Lebanese Center for Policy Studies released in January, the number varied from below 40 percent in Beirut and Tripoli to more than 65 percent in Keserwan and Jbeil. The explanations the social scientists found were that the increase in number of first-time voters as well as the fact that Sunni and Alawite voters did not vote as an act of discontent towards the ruling elites and that there was an increase in the number of confessionally mixed voting centers.

How to explain to a foreign friend that 244442 registered voters in the multi million Lebanese diaspora is meaningful?

Voters’ personal data: Emails by reformist political group Kulluna Irada sent to Lebanese expats to encourage registration sparked intense controversy on social media, as many feared the use of personal data without the consent of voters raised privacy problems.  Kulluna Irada said the data was all open source and nothing illegal had been done in procuring it.

And data in general: Right in the middle of that controversy, the minister of Telecommunication. Johnny Corm, suggested during a TV interview that he’s considering selling user data to private companies in order to increase the ministry’s revenues.

The #Telecommunications Minister explains that the #data he proposes to sell to #advertising companies during #election season is anonymized data, arguing that many global companies adopt the same strategy.
./3

A man hears what he wants to hear and disregards the rest: President Michel Aoun has said that he won’t sign a decree that reschedules the parliamentary elections for March 27. “If I receive it, I will return it for reevaluation,” Aoun said.

Aoun told al-Akhbar newspaper that he will not approve that the elections take place on any other dates than May 8 and May 15. “No one can impose a decree on the president,” he added.

“The elections have never been held in Lebanon before May or June,” Aoun said, adding that the weather in March might deprive thousands of Lebanese from voting.

Not an alliance: “Hizbullah respects three main rules: Resolution 1701 (that ended the 2006 war), domestic stability and avoiding any harassment to the ambassadors of countries that designated Hizbullah as a terrorist organization, such as the Americans, British, Germans and Arab countries,” Aoun told al-Akhbar in the same interview.

We agree to disagree: “[Saudi Arabia] was the first country I visited when I was elected for the presidency in 2017,” Aoun said.

He also pointed out that he prefers that Information Minister George Kordahi – who started the diplomatic row with the Gulf states by criticizing their military intervention in Yemen – take the decision to resign over the option of sacking him.

Seconded: Free Patriotic Movement chief Gebran Bassil, Aoun’s son-in-law, called for “differentiating” between the stances of the Lebanese state and Hezbollah, noting that he had “repeatedly” expressed his “opposition to Hizbullah’s stances” during his tenure as foreign minister.

An optimist: PM Najib Mikati said that his cabinet will soon be able to convene and that a deal with Hezbollah and Amal is close. He also said he was optimistic after discussing with Aoun and Amal leader Nabih Berri during the Independence Day parade.

Only on our terms: Hezbollah deputy chief Sheikh Naim Qassem on Friday said that his party “backs the resumption of the Lebanese government’s meetings,” but he added that the government should only meet after “addressing the reasons that led to the meetings’ suspension.” That is a euphemism for judge Tarek Bitar and his investigation into the Beirut blast that Hezbollah sees as “politicized” (another euphemism for Western-backed).

Restrictions on Belarus flights: Lebanon said last Wednesday that only foreigners with Belarusian residency permits would be allowed to fly from Beirut to the ex-Soviet country, amid a migrant crisis on its border with Poland. The announcement came after European Commission Vice-President Margaritis Schinas visited Beirut to warn against human rights abuses in between Belarus and Poland.

Another boat: The Lebanese army said Saturday it had stopped a boatload of 91 people including Syrian and Palestinian refugees from departing Lebanon illegally. The boat almost sank in bad weather and that all on board, mostly women and children, were rescued and taken to shore. The statement did not specify their intended destination, but it was probably Cyprus, the closest EU shore.

The refugees in Barca: A group of 39 Palestinians carrying Lebanese passports refused to board their flight during a stopover because they wanted to request asylum in Spain and spent 5 days on the El Prat airport waiting for the Spanish authorities to find a solution. Eventually, they could go out of the airport on Saturday, according to La Vanguardia.

UNRWA in crisis: Palestinian refugees in Lebanon face the country’s economic crisis, have no right to work and they also may not receive any aid from international organizations either.

The UN agency for Palestinian refugees, UNRWA, fell well short last Tuesday of its target to plug a $100-million gap this year and secure full long-term funding despite fresh pledges from donors.

UNRWA warned it was facing an “existential” threat as it urged the international community to commit to more stable financing at a conference in Brussels, insisting it needs to find $800 million a year going forward.

“Our operation require a minimum of $800 million a year. It is not possible to operate with less than that,” Lazzarini said.

UNRWA, which has a staff of 28,000, provides assistance to more than five million Palestinians registered with it in the Palestinian territories, Jordan and Lebanon.

Satellite imagery from Moscow: Lebanon’s Foreign minister Abdallah Bou Babib was in Moscow today and obtained satellite images of the Beirut Port to use in the blast investigation. It is unclear how helpful they may be.

Diploma factories:  Iraq has summoned its cultural attaché in Beirut for an investigation into the alleged sale of “hundreds” of fake Lebanese university degrees to Iraqis, including MPs. The fake degrees – reportedly hundreds – cost “between $5,000 for a master’s degree and $10,000 for a PhD”, an Iraqi official told AFP.

Auditing the self: Central Bank Governor Riad Salameh on Friday met with Prime Minister Najib Miqati and said he handed him “a report prepared by the BDO, Semaan, Gholam & Co auditing company.”

“The report was prepared at my request and it includes an auditing of my personal bank accounts and the accounts that have been mentioned in the press for the past year and a half and are the subject of judicial investigations,” Salameh said after the meeting.

On Thursday, journalist #MarcelGhanem hosted the #BDL Governor #RiadSalameh who explained to citizens the financial audit he conducted into his own accounts,
./1 pic.twitter.com/9XpHwAVLYD

From Tehran to Beirut: Turkish Foreign Minister Mevlut Cavusoglu visited Lebanon last week right after he had been in Tehran to warm relations with Iran. In Beirut, he offered to mediate the diplomatic row with the Gulf states and also invited PM Mikati to Ankara.

Podcasts: Our columnist Ronnie Chatah had a long and thorough conversation on his podcast, The Beirut Banyan, with journalist Jad Ghosn, himself one of Lebanon’s most followed podcasters, about the role of journalism after the Beirut blast. In a tiny snippet of Ghosn’s reflection on one’s political relevance when they are not aligned with old sectarian factions in Lebanon:

One of many special moments shared together on this episode.

The full video is available on our YouTube channel & across audio podcast platforms.

Subsidies were lifted on medicines and hospitals are struggling to care for the sick. The incidents of Covid19 cases has been slightly on the rise in Lebanon in the past two weeks so keep safe and wear your mask.