Lebanese women should run for office

Lebanese women have long been on the sidelines of lawmaking positions, but a group of activists strives to introduce a gender quota and break the political glass ceiling. 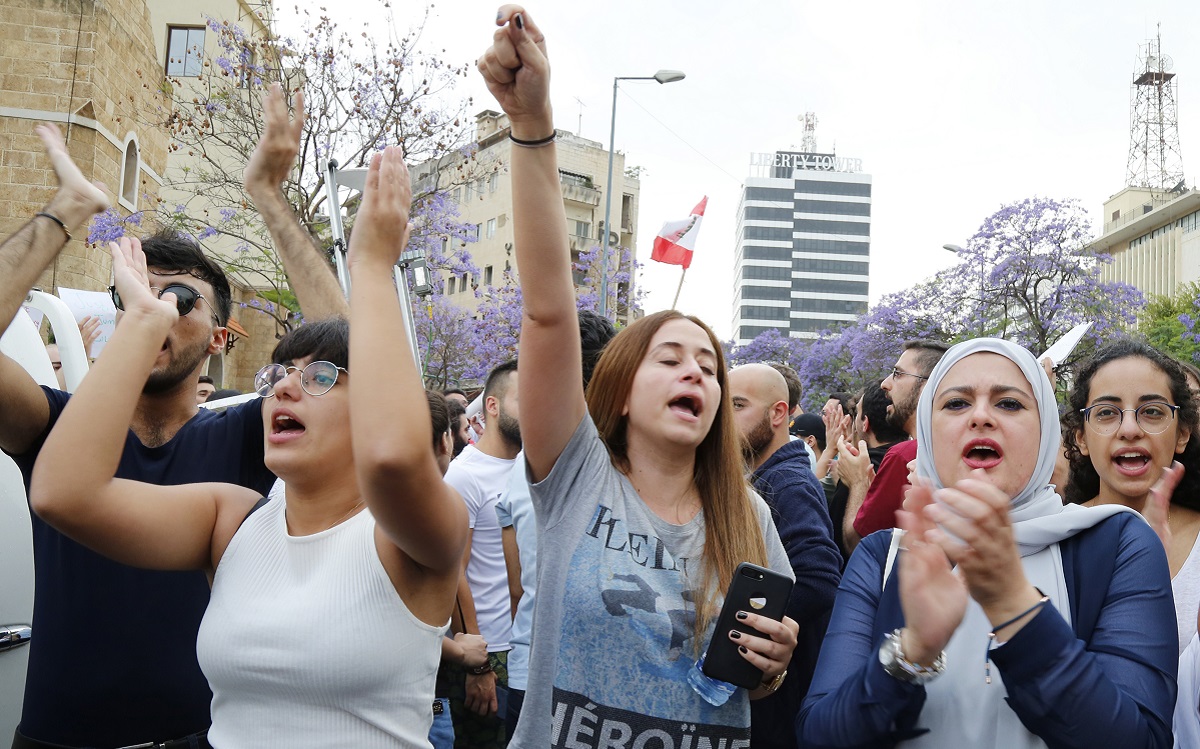 Supporters of a civil society movement rally in front of the Ministry of Interior in Beirut contesting the unofficial results in the Lebanese capital on May 7, 2018. Photo by Anwar Amro, AFP.

Attempting to sway public opinion and sow endearing emotions in the hearts of people, including the EU parliament, who criticized his cabinet that includes one woman only, Prime Minister Najib Mikati arguably gave women status through a patriarchal lens in his statement after his government won the parliament’s confidence vote two weeks ago.

It did not bode well for him when he defined women in relation to the men in their lives, saying a woman is “the mother, the wife, the sister, the daughter, the granddaughter” to convince the public that despite her low political representation, she remains an integral part of society.

With imminent parliamentary elections, a demand for a gender quota in the parliament by political campaigners and experts, particularly those from the civil society, is placed yet again on the table. Securing impartial and, to some degree, equal political representation for women in the upcoming 2022 general election that is already seeing other representation drawbacks such as the possibility of losing the diaspora voting, has become a central focus.

Women have long been sequestered from politics and placed on the sidelines of lawmaking positions in Lebanon, an ordeal exemplified in the number of women elected in the last five parliamentary elections which varied between three to no more than six out of 128 seats. Mikati’s recent cabinet formation exhibits a slight improvement from his previous terms in 2005 and 2011, which included zero women.

More than two decades have elapsed since Lebanon adopted the Convention on the Elimination of All Forms of Discrimination Against Women (CEDAW), yet it has failed hitherto to comply with the treaty and implement a gender quota system essential to cultivating women’s integration in the legislative arena and consequently turning the tide in parliament.

A proposal to amend the electoral law and assimilate a women’s quota was developed by Fiftyfifty, an organization advocating for women’s political participation and expertise.

The bill was supported by UNDP’s branch: the Lebanese Elections Assistance Project (LEAP), adopted and submitted to the parliament by MP Inaya Ezzedine, and is presently awaiting endorsement.

More than 50 civil society and non-governmental organizations, experts and journalists, in addition to the Arab Women Organization represented by Fadia Kiwan, professor of Political Science at Saint Joseph University and one of the three main experts who devised the gender quota bill, flocked together and formed The Civil Coalition, led by Fiftyfifty, to advocate for the quota.

Consisting of two clauses, the bill calls for 26 reserved parliamentary seats for women out of the total of 128. This means roughly 20 percent of the parliament, coupled with at least 40 percent of both men and women on candidates lists.

The 26 seats should be equally apportioned among prospective Christian and Muslim legislators and are only elected from electoral districts where more than one seat is allocated for a denomination of either faith, according to Kiwan.

We don’t want a mere women presence, we want these women to carry a reformative vision and that which enjoys integrity and dedication to serving the public.
Fadia Kiwan, Professor of Political Science, USJ

To put it into perspective, if one seat is reserved for a Maronite Catholic candidate in Tripoli, a district in northern Lebanon, a woman from that confession cannot nominate herself within the quota on Tripoli’s candidate list. That seat is exempt from the quota, but women can still run for the seat.

Without a guaranteed seat, “women still have the option to get nominated outside the gender quota and compete against men,” Kiwan said.

“I don’t only hope for an equal representation in the upcoming parliament, the upcoming government and in all decision-making positions but I also hope their performance along with that of men is different in quality. We don’t want a mere women presence, we want these women to carry a reformative vision and that which enjoys integrity and dedication to serving the public,” Kiwan added.

Eight parliamentarians are ready to sign the bill, said Fiftyfifty head, Joelle Abou Farhat. She says her organization continuously and relentlessly lobbies for the endorsement of the legislative proposal by the political parties represented in parliament.

“If they endorse it, it will be a big victory for the Lebanese woman,” Abou Farhat said. “It will show that she was able to penetrate the wall, run political positions, and enter the parliament.”

“Equilibrium does not apply here”

Efforts similar to those pulled by Abou Farhat and Kiwan led to a sharp turnaround in the number of women on the ballot in the 2018 parliamentary elections. An unprecedented 113 women registered as candidates, a whopping surge from 12 in 2009.

There are concerns, however, that the proposed gender quota might not pass scrutiny by the traditional political parties who have previously opposed it.

“Hezbollah was one of the chief parties clear on their stance against a women’s quota, in words and in action,” Abou Farhat said.

The militant Shiite group, who assembled a candidate list excluding women in 2018, withdrew from a conference discussing the gender quota the year prior, before the dialogue commenced.

Hezbollah was one of the chief parties clear on their stance against a women’s quota, in words and in action.
Joelle Abou Farhat, Fiftyfifty

A senior member and the only woman in the political bureau of Hezbollah, Rima Fakhry, disclosed at the conference that her group does not consider Lebanese women apt for MP positions.

“For us, the woman is a woman. She must work to realize the main goals she exists for. These are not different from those of men. But the difference is in the details,” she said. “She has a home. She is a mother and must bring up generations. This takes a lot of the woman’s time.”If the bill is rejected, Abou Farhat said the backup plan is to bargain for a candidate list that includes 50 percent from both genders.

Kiwan explained that the fierce objection to women’s participation in the political sphere by the traditional political ruling class stems from a fear of women dominating the political enterprise they have been governing for decades.

She recalled the time a parliamentarian berated the idea of a women’s quota and told her women should simply compete against men. She, in return, suggested his party should run against all Lebanese parties devoid of the sectarian quota enshrined in Taif agreement, a treaty set in 1989 to provide equal representation for both Christian and Muslim sects in the Lebanese parliament.

“This would mess with the country’s equilibrium,” was his argument.

“But it’s okay to have 125 or so men parliamentarians alongside hardly any women,” Kiwan said sarcastically. “Equilibrium does not apply here.”

Women have long been dissuaded from seeking positions of power by the eight traditional political parties that have vied for those high-ranking positions and whose family dynasties have dominated politics in Lebanon since the early 1990s. Of the 86 women who officially made it to candidate lists in 2018, 94 percent ran as independent.

It’s unsurprising to see women leaders occupying political positions and being at the forefront of the nascent political parties, as opposed  to the traditional parties where women have been historically marginalized, said Hussein El Achi, a lawyer and a member of Minteshreen, a youth-led progressive political party that emerged out of the October 17th Revolution, where women were remarkably piloting its course.

Discrimination against women in the Lebanese society is exacerbated and enforced by some of the current traditional political parties, especially in rural areas where they try to keep women in the realm they have created for them throughout history.
Hussein el Achi, Minteshreen

The party is an established political organization as of 2021 and in addition to advocating a gender quota, they vehemently demand fair elections for the diaspora and equitable participation of the youth by bringing down the voting age to 18.

The gender quota system is a type of positive discrimination in favor of women and is a requisite to retaining societal equilibrium, at least for a transitional period, contended El Achi.

“They’re wrong when they say women do not want to run for office,” Fiftyfifty’s Abou Farhat said. “The problem is that they are not given equal opportunities with men.”

According to Lebanon Support, an independent non-governmental information and research center, Lebanon ranked 147th out of a total of 149 countries in 2018 as per the Global Gender Gap Index, with one of the lowest rates of women’s political representation in the region.

“Discrimination against women in the Lebanese society is exacerbated and enforced by some of the current traditional political parties, especially in rural areas where they try to keep women in the realm they have created for them throughout history,” El Achi said.

He added that moving toward decentralization in Lebanon, municipalities would have sizable roles in the rural districts, so his party calls for gender quotas on all local authority positions.

Redemption for a historical mistake

Paula Yacoubian, a political activist and former member of parliament, nests at the warehouse of her campaign DAFA, a donation initiative she launched in 2013 to assist underprivileged families. Yacoubian, a former journalist, ran in 2018 on an independent list and was one of the few women elected to the Lebanese Parliament. She resigned in 2020, after the Beirut Blast.

“I want to represent a society I resemble,” Yacoubian said.

She believes Lebanon’s electoral system functions through the lens of its religious sects whose current lords persistently pass on their seats to the next man in the family.

“People in this country say the gender quota is insulting,” she said. “In the country of quotas, that are used to represent all sects, they will tell you this particular quota is humiliating.”

Confronted with unshakable patriarchy, she is one of the fiercest gender quota advocators in the Lebanese parliament. She believes the quota would be a correction for a historical mistake where the patriarchal political movement invested in men while invigorating the idea that women are only good for marriage purposes.

The gender quota would provide a habituation phase where the idea of voting for women becomes gradually normalized, she added.

Fifty-eight percent of who voted for me were women and this proves that women do support women contrary to what they say.
Paula Yacoubian, former MP

Yacoubian was nominated on a civil society electoral list in 2018 which enclosed 33 percent of women candidates, mostly for seats with a high probability to be won.

“Fifty-eight percent of who voted for me were women and this proves that women do support women contrary to what they say,” she added.

During her term, Yacoubian proposed a bill calling to lift all withholdings on certain sections of the Convention on the Elimination of All Forms of Discrimination against Women (CEDAW) that Lebanon maintains.

Things went west in the parliament, she said, which ascertained to her that they are vigorously attached to the status quo and women breaking the political glass ceiling means altering long-lived political schemes.

Throughout her term and even after her resignation, Yacoubian was confronted with sexist slurs and slut-shaming by members of traditional parties.

“If I were a man, would they use the same tactics against me?” she said.

“I think [current political parties] should be ashamed if they try to run with lists with no women or where the woman is merely a decoration on their lists. I actually hope they do just that because it would be the angle where you can compare the ruling class to the opposition.”