2022 started with a new wave of the COVID Omicron variant in Lebanon, but many remain unwilling to take the vaccine as they continue to fight against and disapprove of the state’s health measures. 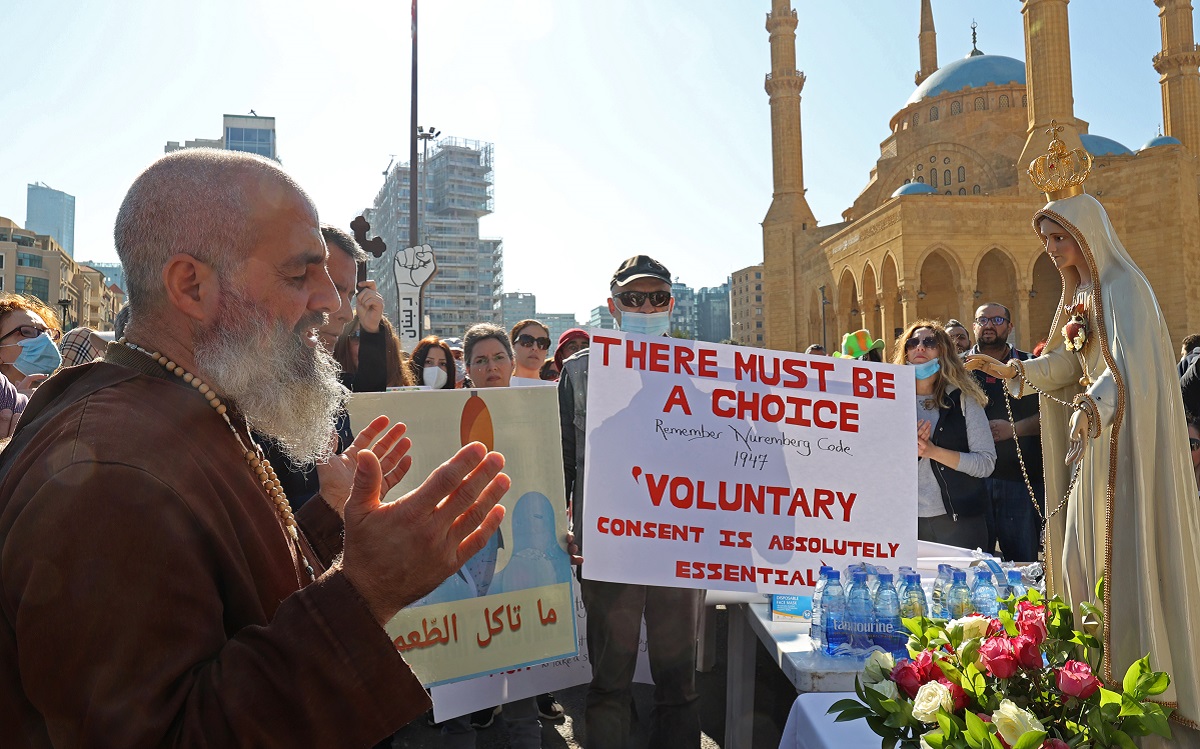 A priest leads a prayer during the protest against the mandatory Covid-19 vaccine pass in the centre of Lebanon's capital Beirut, on January 8, 2022. Photo: Anwar Amro, AFP.

Fadia Abdouch says she lost her husband four months ago, due to health complications caused by COVID-19.

The news came as a complete shock to the mother of two kids, 22 and 25, who expected her husband’s two shots of Pfizer vaccine to prevent his death.

“All four of us got COVID at the same time so we were quarantined together. We were all asymptomatic, but my husband had a stroke so we took him to the ER, where he died a few days later,” Abdouch told NOW.

After the tragic incident, Abdouch says she started her research on the vaccines and their side effects.

“Wasn’t this the main promise of the vaccine? To protect people from dying? Everyone in the ER with my husband was vaccinated and doctors did not have answers to why this was happening,” Abdouch said.

Many Lebanese, just like Abdouch, do not trust the COVID-19 vaccines. Only about 38 percent of the population in Lebanon has received both vaccine shots, and only 19 percent has received the booster shot, according to the Health Ministry.

Earlier this month, on January 8, hundreds of people rallied in Beirut to protest against the announcement of measures against the unvaccinated. Although vaccination is not compulsory in Lebanon, the government has imposed fresh restrictions, including the requirement of a vaccination certificate or negative PCR test entry into restaurants, hotels, and similar venues.

Civil servants were also required to be either vaccinated or take regular PCR tests to be able to go to work. In the case of people who are not vaccinated and need the PCR test every few days, it would cost some 2,000,000 LBP per month [1330 $ at the 1,500 LBP/$ rate, but only about 70$ at the market rate], which most civil servants can not afford to pay.

At the rally, anti-vaxxers said they felt as if they were being stripped of their freedom of choice. Abdouch, whose trust in vaccines has been shaken by her husband’s passing, believes people like her are unfairly seen as a political group.

“As if we needed more divisions and discrimination in a country of 18 sects and political divisions. Now we’re being called the bad and the dangerous,” Abdouch said.

Charbel, 28, who also says he doesn’t want to get vaccinated, said that his family threatened to not see him anymore because of his stance.

“They told me this over Christmas dinner last year but I don’t care. Even if I lose my job and ability to travel, I’ll remain unvaccinated,” he told NOW.

Charbel said he also refused to marry someone vaccinated as he believed it would alter the child’s DNA.

Some of us just want to wait for more research to come out so we can decide to inject something in our bodies.

Anti-vaxxers often question the vaccine’s side effects, insufficient lab tests and research, and the manner in which the vaccines are being enforced worldwide. The bullying and condescending attitude from many vaccinated people further heightened their doubts, they say.

“Some of us just want to wait for more research to come out so we can decide to inject something in our bodies,” Abdouch said.

Samir Skayni, a local journalist who covered the protest in Beirut and follows anti-vaxx movements across the world, said that most of the participants also harbored religious biases against the vaccine.

“They were largely practicing Christians who believed their bodies were the property of Jesus that could not be tampered with,” Skayni told NOW.

Some were not convinced by science and chose alternative scientific sources, such as guest doctors on youtube podcasts – like the Joe Rogan show or right-wing American news sources, that were first triggered by Donald Trump’s anti-vaccine stance.

Even if most protesters were conservative Christians at the January 8 rally, Lebanese of all sects refuse to vaccinate for largely the same reasons – lack of trust in the vaccines and religious principles.

Skayni believed this was an extension of the anti-vaxx movement that started in the USA during Trump’s presidency. Both movements have the same political traits, he said.

In the United States, vaccine resistance was common among conservative, Evangelical, and rural Americans. Their vaccine refusal was seen as a statement of identity and a test of loyalty.

“The anti-vaxxers in Lebanon share the same psychological structure. The right-wingers everywhere tend to lean more towards conspiracies, doubt the science presented, and are generally more concerned with preserving their old values and beliefs such as the case of the Christian protestors [in Beirut],” the journalist added.

The vaccine stance then becomes a detail in the structure of the far-right groups.

Joseph El Khoury, Lebanese psychiatrist based in Dubai, explained that the Lebanese’s tendency to believe conspiracy theories is a result of a dishonest political system that keeps the population in the dark and blames outside forces for internal problems.

“We are a society that is a fertile ground for division and conflict.  And each new topic gets linked to already established divisions. On a global level, the pandemic came in the wake of acute divisions emphasized by populist governments such as the Trump presidency. The vaccine fed into already established fault lines,” El Khoury said.

We are a society that is a fertile ground for division and conflict.  And each new topic gets linked to already established divisions.

The establishment parties used emotional rhetoric and populist speech as a way to ensure the people’s support. In a study about media and communication uses in Lebanon during the COVID-19 pandemic conducted by the Institute of Media Research and Training at the American Lebanese University, TV was found to be the main source of information for most Lebanese. Social media ranked second.

The study divided the media’s coverage of the pandemic into two phases. In the first, some news outlets accused the previous health minister Hamad Hasan – a Shiite Muslim – of importing the virus from Iran. People also blamed the Lebanese Shiites for spreading the virus as the first recorded COVID-19 case was a woman who had just returned from Iran.

The second phase started after the World Health Organization declared COVID-19 a global pandemic on March 11, 2020, and when the sectarian rhetoric came to an end.

“In the second phase, the country was performing extremely well despite the bad economic and political situation. Legacy media outlets were educating people on measures of precaution, such as staying home, washing hands, using sanitizer,”  Jad Melki, director of the Institute of Journalism and Media at LAU, told NOW.

Although most TV channels attempted to spread awareness and educate, social media remained loose and unguarded while misinformation spread.

The vaccine’s arrival to the country was accompanied by rumors and widespread misinformation.

One Lebanese group on social media called Conscious Warriors For Truth distributed flyers at the anti-vaxx protest in Beirut, claiming the virus cannot be transmitted through asymptomatic patients, COVID-19 statistics are exaggerated, and the vaccines are unsafe and ineffective, despite many scientific studies proving the contrary.

An audio recording circulated across social media groups of a priest calling on worshippers to attend the protest against the new vaccine regulations.

“If we don’t take action then our God will hold us to account because we’re not taking a stand with justice,” he said. “In words, we pray but in action we let the devil eat our children. Can you imagine now vaccinating little children at school?,” the recording said.

Melki explained that sensationalist news spread more easily and that people who got their news from social media were more likely to believe fake news. However, it seems that the number of anti-vaxxers within Lebanon, at least those who are vocal or active, is relatively low.

“Despite everything we went through as a country, people remained rational and the anti-vaxxers don’t have a wide following like some Western countries,” Melki said.

“I think their [protest] numbers were low, [and] cannot be compared to the 30,000 who came to the vaccine centers during the same day,” Abiad told local media.

At the earliest stage of the pandemic, a COVID committee was created to mitigate the spread of the virus. The committee headed by Dr. Petra Khoury also involved media professionals, security and army officials.

However, after Dr. Khoury left for a new job, the committee was dismantled. People struggled to access information regarding the third shot and marathon availability.

“The solution would be to reinstate the committee and have a unified body that is leading and guiding the communication strategy of the whole country,” Melki stated.

The LAU research team was working on a new study theorizing two solutions to prepare a population for a pandemic; media literacy and health literacy.

“It is not enough for the media to be the sole fact-checkers, we need to prepare ourselves as individuals. We are testing to see if media literacy and health literacy curricula at schools would help protect our population from misinformation so that they would not rely only on the media,” the professor explained.

For Skainy, the country also lacks a unified sense of civic duty towards one another.

“We don’t feel as if we’re co-existing in one society where we feel responsible for each other’s wellbeing,” he said.