As inflation rates climb and the Central Bank rushes to buy dollars on the Sayrafa platform, depositors’ frustrations deepen and bank raids are once again on the rise. 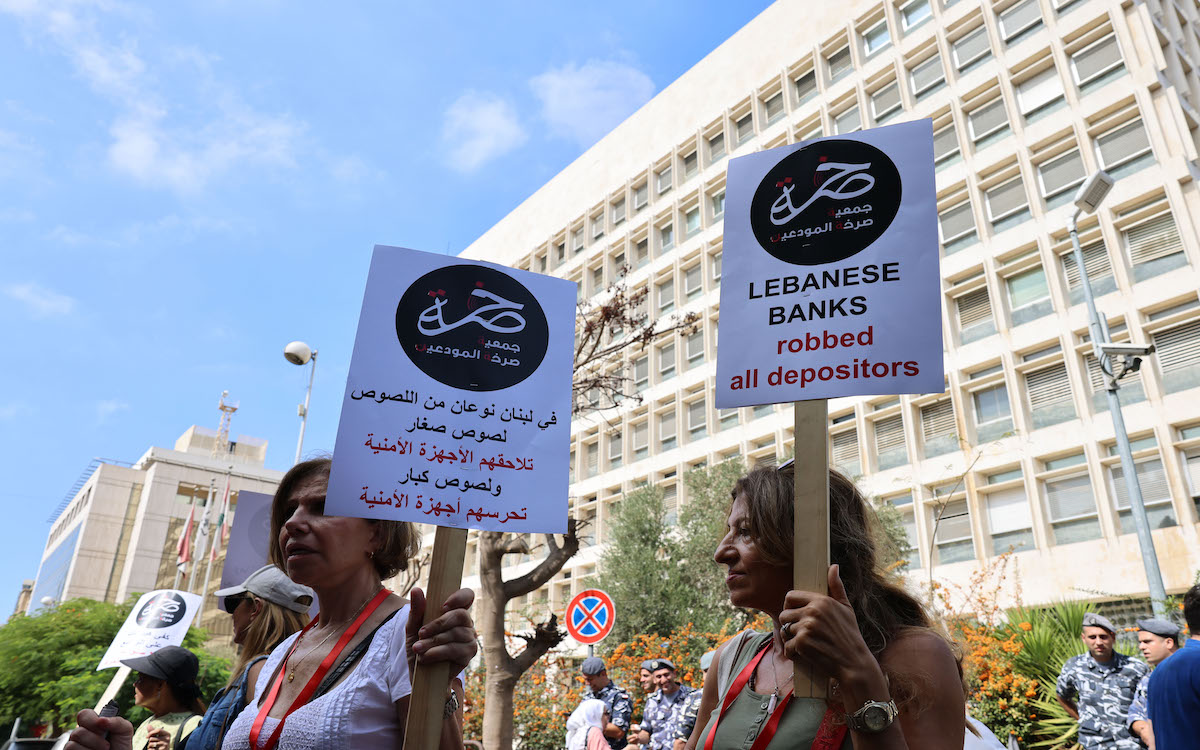 Demonstrators carry banners during a protest organized by "Depositors' Outcry" to ask for their deposits blocked in Lebanese banks, on October 5, 2022 outside Lebanon's Central Bank in Beirut. Banks in Lebanon, mired in an economic crisis for more than two years, partially reopened last week under strict security after a week-long closure following a slew of heists by customers desperate to access their money. Photo: Joseph Eid, AFP

Today, two new raids on banks in Sidon and Nabatieh, in south Lebanon, occurred, similar to the series of bank holdups that took place in September 2022. The first one saw gunshots fired at a Sidon branch of BLOM Bank on Tuesday, according to Naharnet.

In Nabatieh, on the same day, a second operation stormed the Banque Libano-Française. The armed depositor, who claims $50,000 in savings, demanded his money in order to cover the treatment expenses of his diabetic son.

Why this matters, Mohammad, a retired Lebanese Army soldier from Sidon, opened fire with a pistol at the bank’s security personnel before engaging them in a clash.

Since 2019, depositors have carried out several similar raids, holding up banks and forcing employees to hand over sums of money from their accounts, which have been blocked by banking restrictions since then.

In Mohammad’s case, the bank declined to sell him dollars at the Sayrafa rate, which is less expensive than the continuously rising market rate.

27 bank holdups occurred in 2022, and the trend appears to be continuing. The man from Sidon was arrested, and his fate remains uncertain. A large number of depositors from past raids were also arrested, and were released shortly afterward.

Yes, but this is happening at a time when the dollar rate is steadily approaching 50,000 and the Central Bank is attempting to provide a substitute on the Sayrafa platform.

Since December, Lebanon’s Central Bank (BDL) has been buying dollars from the market to resell on the Sayrafa platform in order to increase its cash reserves. As a result, the option to purchase dollars cap-free was opened, and the exchange rate increased significantly from about 30,000 LBP to 38,000 LBP on the platform. Even though this caused an inconvenience for Sayrafa users, it was still a better choice than the 47,000 LBP rate on the black market.

However, since there are no present signs of alleviation to the crisis, bank raids remain an imminent threat, especially since Sayrafa is neither reliable nor durable. Sayrafa’s policies and rising inflation rates might further escalate the dangerous situation.

Moreover, on Monday, the Court of Cassation started making logistical arrangements for the arrival of judges and investigators from France, Germany, and Luxembourg.

The purpose of the visit centers around investigating the financial transfers from Lebanon to France, Germany, and Luxembourg by the central bank and its governor, Riad Salameh.

The European judicial delegation will begin meeting with Lebanese judges on Wednesday to prepare for sessions during which the delegation will listen to bankers and former deputy governors of the central bank.

In conclusion, the banking system has been in a critical situation since 2019, and does not appear to be improving in 2023. BDL’s next moves are unpredictable and risk wreaking further havoc on the lives of depositors, whose frustrations climaxed last year, leading to multiple bank raids conducted simultaneously. Although the extent of civil damage caused by Sayrafa and the banks this year has yet to be determined, without an adequate solution, chaos is set to continue.