While Hezbollah’s secretary-general Hassan Nasrallah tried to justify launching the rockets from the Druze town of Chouya, an open-source analysis of the weapon and its reach proves that the location was chosen to miss the target, historian Makram Rabah argues. 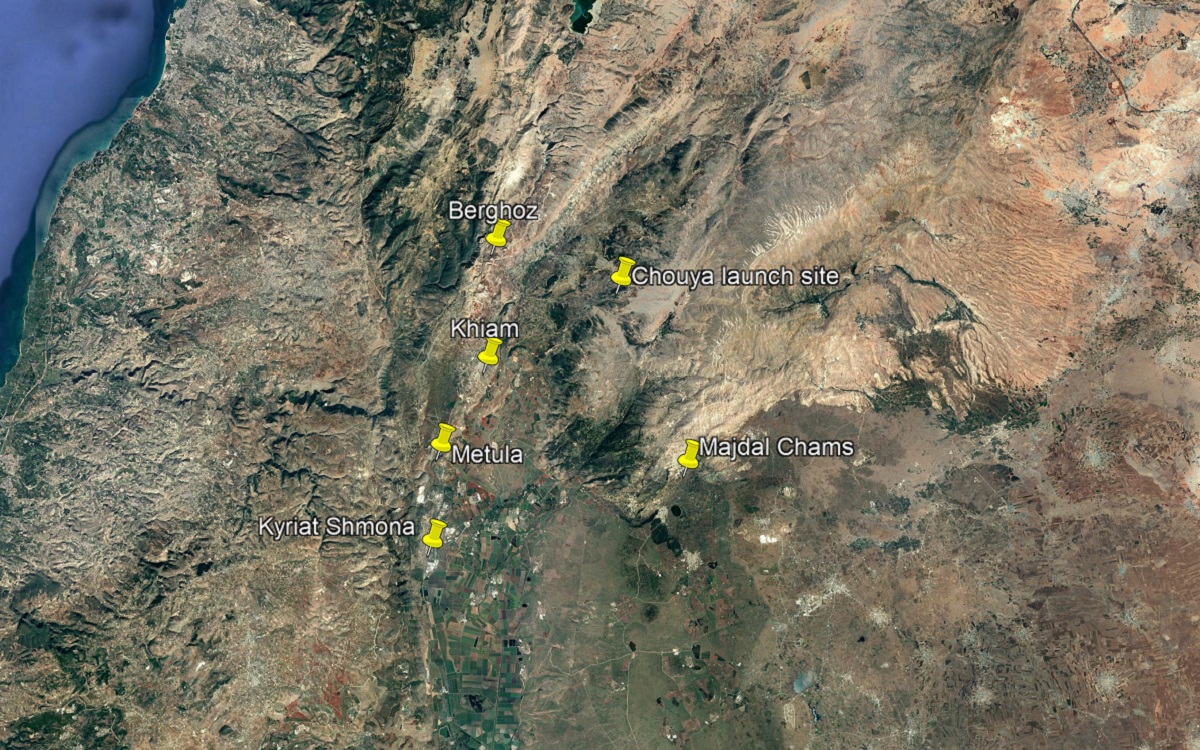 Despite Nasrallah saying that Chouya was the best place launch a rocket to hit an Israeli outpost, there were better and closer launch locations in the area, historian Makram Rabah writes. Photo: Google Earth.

In his latest TV appearance Hassan Nasrallah, the secretary general of Hezbollah, went out of his way to justify his militia’s use of their weapons to bully and to subjugate their fellow Lebanese.

Nasrallah was compelled to put on the show after his henchmen clashed with the Arab Tribes of Khalde, South of the capital Beirut. But even more so when his men were stopped by the Druze villagers of Chouya as they tried to sneak away after they used the outskirts of the village to launch Grad 122mm rockets into the Shebaa Farms, where they only hit bushes and trees.

Naturally, many of the supposed “facts” which Nasrallah presented were false and are part of the Iranian militia “ logic” – or lack thereof – which throws around misinformation and then challenges the public to contest them. However, when such an act of defiance does happen, Nasrallah and his followers refuse to concede simply under the premise that “Nasrallah is an honest and trustworthy cleric who’s also infallible”.

One particular claim that Nasrallah made was that his men had to use the outskirts of Chouya, which is in the region adjacent to the Lebanese-Palestinian border, simply because the rockets which they were using were of limited range. Also, he said,  Hezbollah was forced to use this particular geographic location in order to actually hit an Israeli military outpost.

While my areas of expertise are far from military strategy, my research skills allow me through a simple open-source query to debunk Nasrallah’s statement.

The 122mm Grad launcher used in Chouya has a range of 22KM. The Grad 122 mm rocket system is originally a Soviet-era weapon and its accuracy depends on launching multiple rockets to destroy huge areas. It is a weapon used by the Soviet Red Army in WWII when it earned the nickname of “Stalin’s Organ”, in reference to the Soviet dictator Joseph Stalin.

The launcher Hezbollah used seems to have misfired, mostly due to the incompetence of its operators. It was unable to achieve its kill radius of 600mx600m.

Regardless of the limitations of the weapons used, Nasrallah claimed that Chouya was the only viable launching point. That is a complete farce.

In reality, Nasrallah and his militia did not wish to inflict damage on Israeli targets as much as they wanted to embarrass the Lebanese state. What remained of it.

Hezbollah thus could have used the villages and towns of Khayyam, a predominantly Shiite town, much closer to the border, or even from Berghoz, a secluded Druze village. Both of them make better launching and closer launch locations than the one they used, on the outskirts of Chouya.

In reality, Nasrallah and his militia did not wish to inflict damage on Israeli targets as much as they wanted to embarrass the Lebanese state. Or what remains of it.

Most likely, they wanted to put pressure on the Lebanese Army and its commander General Joseph Aoun who has been successful in rallying the support of the international community to support the Lebanese armed forces and to provide them with much needed aid to keep this western-trained outfit united.

“Nasrallah’s Organ” has thus far proved to be no less effective than his bag of misinformation which seem to be fathomless as much as it is uncreative.