The IMF deal is meant to help Lebanon’s economy recover on a long term, but experts warn that the loans are not cures for all ailments, economic recovery is a long and austere road, while most are skeptical of the politicians’ commitment to implement real reforms. 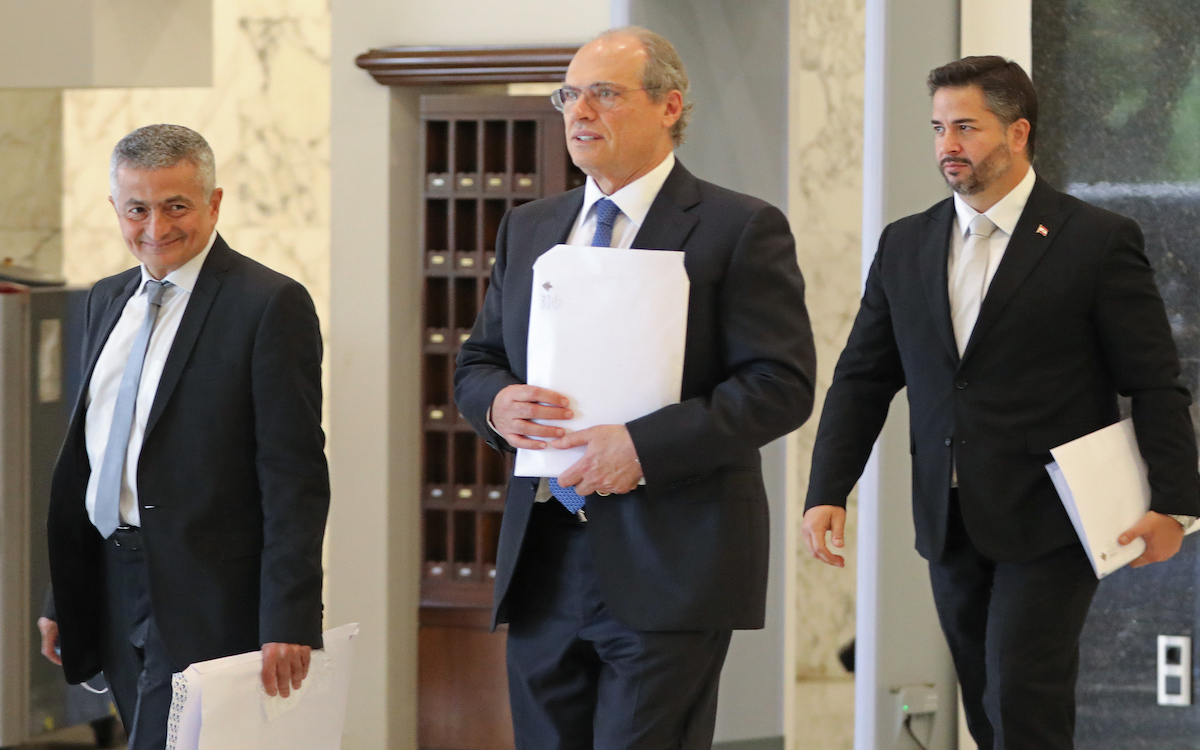 Lebanon's Finance Minister Youssef Khalil (L) and Minister of Economy Amin Salam (R) leave the presidential palace in Baabda, east of the capital Beirut, following a cabinet meeting on September 13, 2021. Lebanon's newly-formed government held its first meeting to discuss ways of rescuing the country from one of its worst ever economic crises. Photo: Anwar Amro, AFP

Released information showed that President Aoun assured Lima that “Lebanon is committed to carrying out the required reforms,” asserting the need for the IMF’s deal within the limits of its application in Lebanon. As for Lima’s conversation with the caretaker Finance Minister, the minister’s press office stated that the two discussed the technical support that Lebanon receives from the IMF, in addition to the economic reform program.

No reports were found on Lima’s meeting with PM Mikati.

On April 7, the IMF and the Lebanese government announced a preliminary staff-level agreement that entails a $3 billion assistance package to Lebanon for around 4 years.

If an IMF deal were eventually to be implemented, Lebanon would be able to access the $11 billion in foreign assistance pledged to the country at the 2018 CEDRE conference. However, the deal’s implementation relies on Lebanon’s ability to meet strict conditions.

For this reason, finance experts doubt the government’s willingness to implement the IMF  deal and believe the situation might be a theatrical ploy, as the country sits on the edge of significant political shifts; electing a new PM, government, and president.

“Our politicians are probably trying to put on a good show and give out empty promises to the international donor to procure the money the easy way. However, I don’t think they will be able to deceive the IMF; the deal won’t pass in my opinion,” Economist and Research Manager at the Policy Initiative Sami Zoughaib told NOW.

Lebanon’s economy has been assailed with a devastating crisis since 2019. The Lebanese pound lost more than 90 percent of its value and more than three-quarters of the population has fallen into poverty.

However, the IMF asserted that to consider approving the funds, key structural reforms must be implemented, which include; a forensic audit on the central bank, restructuring the financial sector, a new banking secrecy law, standardized exchange rates, and reforms to state-owned enterprises.

The current political and financial system provide the ruling class with a myriad of benefits and interests that they’d have to sacrifice to implement these reforms.

While Mikati and his advisor were optimistic about the implementation of the reforms, with Mikati even saying “we don’t have an option, it is an obligatory path to negotiate with the IMF and to achieve an agreement,” Zoughaib remains highly skeptical.

“The current political and financial system provide the ruling class with a myriad of benefits and interests that they’d have to sacrifice to implement these reforms,” Zoughaib said.

The economist explained that politicians used the IMF discussions to gain goodwill in the May elections and Mikati sought to be absolved of all responsibility if not reinstated as PM or he uses this agreement as a bargaining chip to come back and lead the necessary reforms that are highly unlikely to happen.

Mikati’s cabinet had approved an economic recovery plan – a key demand by the IMF- that includes restructuring and recapitalizing the banking system, and protecting small depositors “as much as possible,” according to a document obtained by AP.

“This way it’ll be the new government’s fault for not implementing the plan, not Mikati’s,” Zoughaib said.

The plan seeks to restore financial solvency “as a priority to enhance confidence in the state” and protect depositors who had less than $100,000 in their bank account prior to the crisis.

The previous government under former PM Hassan Diab approved its own plan prepared with the help of the US investment bank Lazard, similar to the current one. However, it was killed by the Association of Banks in Lebanon (ABL) which deemed it “biased at the expense of the banks.”

Parliamentarians from the Iran-backed Hezbollah and its ally the Amal Movement were reportedly opposed to both plans. Further divisions means further delay.

Nizar Ghanem, a member of the depositors union, told NOW that the plan is a good first step toward recovery.

We also need to form a national bloc that supports the opposition MPs from the outside because they’re undertaking a vicious fight against a majority that is pro-banks, not the depositors, inside parliament.

Ghanem rejected the idea of a “soft loan” by the IMF that gives money on lenient terms, which he said will only perpetuate the same corruption. Instead, he asserted the need for strictness on reforms that would destroy banking secrecy – allowing the allocation of more accountability to bankers, politicians, and all parties involved in the collapse, in addition to a proper central bank audit and a stronger judiciary to punish those responsible.

The merging of the Lebanese banks into four main banks recapitalized by the IMF loan seemed reasonable to Ghanem, however, details on the government’s next steps remain ambiguous as the country awaits a series of milestones such as the new government formation, the 2022 budget, and the presidential elections that could easily be halted by internal divisions and political stalemate.

“We also need to form a national bloc that supports the opposition MPs from the outside because they’re undertaking a vicious fight against a majority that is pro-banks, not the depositors, inside parliament,” Ghanem said.

A realistic look into the future

Argentina was another country that reached a staff-level agreement with the IMF for a $44-billion agreement on extra financing, with the lender saying that the country met all quantitative targets in the first quarter.

According to the IMF team, the agreement is subject to approval by the executive board, expected to discuss it in the coming weeks.

However, Zoughaib asserted that Lebanon’s situation couldn’t be compared to Argentina, as the latter had a “semi-democratic” rule that has seen significant shifts over the years, whilst Lebanon has been run by the same warlords for over 30 years.

“Lebanon seems to be on Venezuela’s path, in terms of having a protracted crisis that doesn’t end anywhere. Although the two countries differ in politics and drivers behind their crisis, they shame the absence of recovery signals that usually occur after a period of recession,” Zoughaib said.

Furthermore, financial advisor Mike Azar told NOW that many IMF programs fail or go off track after a while. Even if the list of pre-conditions is met, there is no guarantee that the governments would follow through in the long run, which is why the IMF places regular benchmarks and milestones to meet on a quarterly basis.

More and more people are dying, dropping out of their schools, and emigrating in large numbers. These are all issues that need to be dealt with immediately before their long-lasting effects ruin the future of generations to come.

Scholars have found that the reason borrowing governments backpedal from the commitment is often due to pressures from special interest groups; labor unions and business groups, as well as overambitious program designs that do not consider local circumstances.

“The IMF conditions are what Lebanon has needed to do for more than three years now. We’re living the consequences of inaction today. Things wouldn’t have gotten this bad had we implemented these same reforms three years ago,” Azar said.

Even in the case of a lenient lender with softer conditions, the money alone won’t put an end to the crisis, the economist said.

“Money without these reforms won’t solve our problems. It would buy us some time while we accumulate more debt. Then, when we can’t find a way to repay that debt because we didn’t fix the fundamental problems, we end up with an exacerbated crisis over a longer period of time.”

Zoughaib predicted tougher living conditions, claiming that the Lebanese lira would keep receding in value against the US dollar while the country slowly shifts to a fully dollarized economy that will leave no place for small businesses to survive.

He also noted that there are equally significant socio-economic concerns that will distort the future of Lebanese society if ignored for much longer.

Two examples were the education sector, where private universities are unaffordable for the majority and the only public university available has underpaid staff constantly on a strike, and the health sector, where access to health services is either too expensive or unavailable due to medicine shortages.

“More and more people are dying, dropping out of their schools, and emigrating in large numbers. These are all issues that need to be dealt with immediately before their long-lasting effects ruin the future of generations to come,” Zoughaib noted.