The October 17 uprising birthed new political movements that are trying to make a breakthrough in the upcoming elections, but many are having trouble officially registering as political groups, which may obstruct their electoral chances. 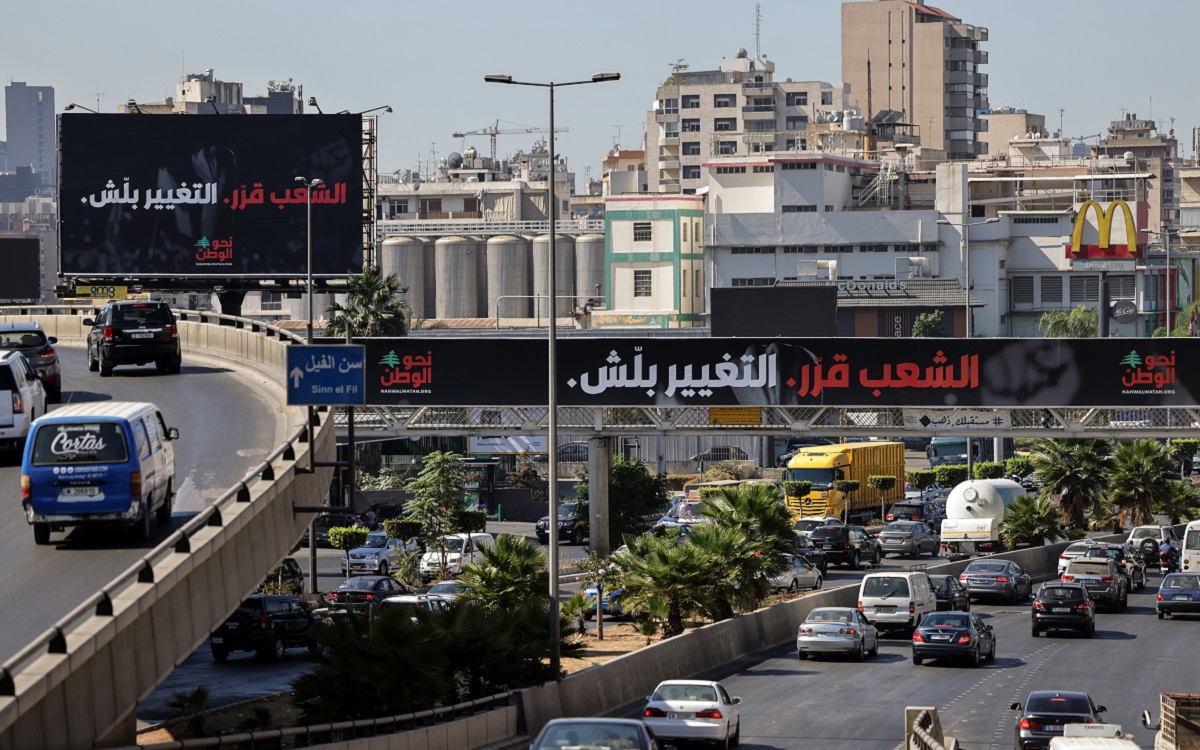 An electoral billboard that reads in Arabic "The people has decided, the change has started" is put up in the area of Dbayeh, east of the Lebanese capital Beirut on October 7, 2021. Two years after a now-defunct protest movement shook Lebanon, opposition activists are hoping parliamentary polls will challenge the ruling elite's stranglehold on the country. Photo: Joseph Eid, AFP.

Hussein El Achi, Lebanese lawyer and the secretary-general of Minteshreen, one of the progressive political groups that were born after the October 17, 2019 uprising, said he saw the limitation of street movements in Lebanon after the August 4 explosion.

“Especially after we protested on August 8 and experienced utmost brutality by the government,”  he told NOW. “We saw that our politicians were ready to kill every last one of us, so we decided that it was time to organize ourselves politically,” Al Achi said.

On June 1, 2021, Minteshreen submitted their official papers to the Ministry of Interior to become an official political party able to run for elections. The process is simple on paper, but, in reality, the obstacles are many and Minteshreen is still waiting for its registration less than 5 months before the scheduled general elections on May 2022.

Lebanon does not have a law for political parties. Instead, it relies on a law issued by the Ottoman Empire in 1909 known as “The Law of Associations”.

According to the law, non-governmental organizations and political parties alike are defined as associations: “groups of several persons permanently unifying their knowledge for nonprofit objectives.”

If one sticks to the literal interpretation of the law, establishing an association requires no prior permit, although it is mandatory to notify the government of its establishment.

This required new political groups that formed in the aftermath of October 2019 to send paperwork regarding members, goals, meeting places, assets, monetary contributions, and internal structure to the Lebanese government. The Lebanese General Directorate of General Security would then run background checks and correspond with the relevant ministries.

Once the minister gives his approval, the association receives a notification which is then published in the Official Gazette.

That final detail was the biggest setback for most new political parties, not just for Minteshreen. They never received it.

The Ministry of Interior did not issue notifications to new groups that challenged the establishment parties after 2019, leading to several legal and financial disadvantages for new parties which require legal frameworks to fundraise and organize campaigns. “Although the law allowed them to resume their political activities, without the notification they can’t have a legal identity that is independent of its founders,” Layal Sakr, Lawyer and Founder of SEEDS for Legal Initiatives.

“A tool of oppression”

Mark Daou, the co-founder of Taqaddom, an opposition party that is planning to present its papers for registration, said the administrative process is full of obstacles.

Due to the economic crisis and Coronavirus pandemic restrictions, public institutions are performing poorly. Underpaid employees show up once or twice a week, and basic materials such as paper, ink, and power are not always available.

“There are no employees in the Ministry of Interior to receive our papers, and they would tell you to not bother as there were already a ton of applications they had to go through first,” Daou told NOW.

But the problems are not only logistical.

Beirut Madinati, another opposition group that has been active since 2016, received the notification only in 2019, after three years of waiting.

“We took the approval by force,” Nermine Sibai, Beirut Madinati’s lawyer, told NOW. “We received the notification after several follow-ups and we pressured the ministry by taking the case to the public and not remaining silent.”

They told us our goals were overlapping and demanded several additional requirements that the law didn’t entail as, only to delay the process so we’d eventually lose interest and give up.

According to the lawyer, the party was frequently asked to present new documents and have had their goals questioned.

“They told us our goals were overlapping and demanded several additional requirements that the law didn’t entail as, only to delay the process so we’d eventually lose interest and give up,” she said.

Meanwhile, the unregistered groups suffered several setbacks. They could not present themselves as a legal entity, therefore no contracts in the name of the party could be signed.  They were not allowed to open bank accounts for the party, limiting their monetary budget and political activities.

“We have people ready to donate but we need a bank account. Lack of funds limits our ability to develop our political work and rent offices,widen our reach, organize seminars and pay our members,” Al Achi said.

Daou explained that donors are not comfortable sending donations to personal bank accounts as they wanted to ensure their money is going towards the party.

“This is an oppression tool the establishment is using to remind us who’s in power,” Taqqadoum’s Daou said.

The October 17 uprising brought with it a spirit of change that attracted many young people towards politics, and pointed their gaze towards the reason behind the country’s collapse, the traditional parties.

Karim Bitar, associate professor of International Relations at Saint Joseph University explained that although limiting the groups’ finances was the biggest motivator for the establishment’s delay tactics, there was no level playing field, to begin with.

“The new groups are not yet in the same category as traditional parties that have been here for decades. They don’t possess foreign support, funds, and clientelist networks but they have the potential to create a momentum for a new wave of change,” Bitar told NOW.

Even if the establishment did not view these groups as strong opponents, they presented a new model of work away from clientelism and sectarianism. This helped them establish an audience base that supported them.

“Any one of these groups that presents legitimate solutions and reforms, and knows how to form foreign relations will have a chance. If they are serious about their solutions then they could offer a new alternative that the traditional parties failed to do in 30 years, which could threaten the establishment’s existence,” Sakr said.

For Minteshreen’s Al Achi, the government was well-aware of their potential, if provided the right funds. A non-sectarian, progressive approach could be developed to reach a wider population.

Until then, members had to contribute from their personal savings to keep the groups running.

“It’s not in their best interest to watch us grow. They realize our potential to get donations and grow as a strong opposition that goes against everything they say or do,” Al Achi said.

As the May general elections approach, the unregistered groups are further disadvantaged.

As long as the elections are not postponed, the opposition has less than 4 months to start their political campaigns.

Both Taqaddom and Minteshreen’s representatives agreed that without the right budget, electoral campaigns were going to be challenging. But this did not stop them from joining the electoral battle, they said.

“It would benefit us greatly to be financially independent. Otherwise, we might have to join other groups’ electoral campaigns,” Al Achi said.

For Bitar, coalitions are necessary to amass popular appeal. Joining forces with other groups has the potential to increase the budget and improve the efficiency of their efforts.

“We are in a state where movements taken separately are not as popular. In order to make a breakthrough they need to join a very wide coalition with similar open-minded reformists and independent personalities,” he said.

The groups are free to choose whichever label they prefer. The law did not differentiate between “party”, “movement” or “association”. As for the opposition’s audiences, the label or official registration is not a top priority.

“Their electorates know they are new movements that are trying to make a breakthrough and the government is already perceived as corrupt so it does not phase anyone if they are given the legal recognition or not,” Bitar explained.

Although the law gives them the freedom to practice their political activities, the groups are still facing an outdated, ambiguous law that served the establishment.

The Ottoman Law, a colonial law meant to keep any type of rebellious organization in check, is made up of two sections and 19 articles; 17 of them were about the requirements made for associations and the final two were about the responsibilities of the police and the Ministry of Interior. The former was granted the right to inspect meeting places and the latter was entrusted with enforcing the law.

The Beirut Madinati’s Sibai considered the law vague and full of loopholes that could be manipulated by the government.

Some of its shortcomings were the lack of legal provisions that allowed the groups to file a complaint or withstand the ministry’s decision.

“If they refuse to give us a notification, where do we go to know why? Or know what to do next? The law allows them to keep asking for additional papers without giving them a deadline,” Sibai said.

The fact that groups have to wait for a long time naturally encourages nepotism because you run out of options. You start judging politicians by who is most likely to give you their signature.

The lawyer called for an implementation of a new law that was specific to the establishment of political parties. One that matched and encouraged the new emerging structure of political groups.

“The law imposes on us a different internal structure than the ones we have. For instance, by law, we’re required to have a party president, which most new movements don’t have,” she said.

The discordance between law and practice keeps political development at a halt and increases the influence of nepotism on the scene.

“The fact that groups have to wait for a long time naturally encourages nepotism because you run out of options. You start judging politicians by who is most likely to give you their signature,” Sibai said.

For Daou, this lengthy process obstructs their attempt at presenting a progressive political image to the people. One that abides by the law and is transparent in its practices.

Al Achi believes that regardless of their legal status, the need for direct confrontation through elections is imminent.

“The establishment has ruined the way we perceive political parties but we are not going to give up until we take back the real meaning of governance from those who distorted it,” Al Achi concluded.