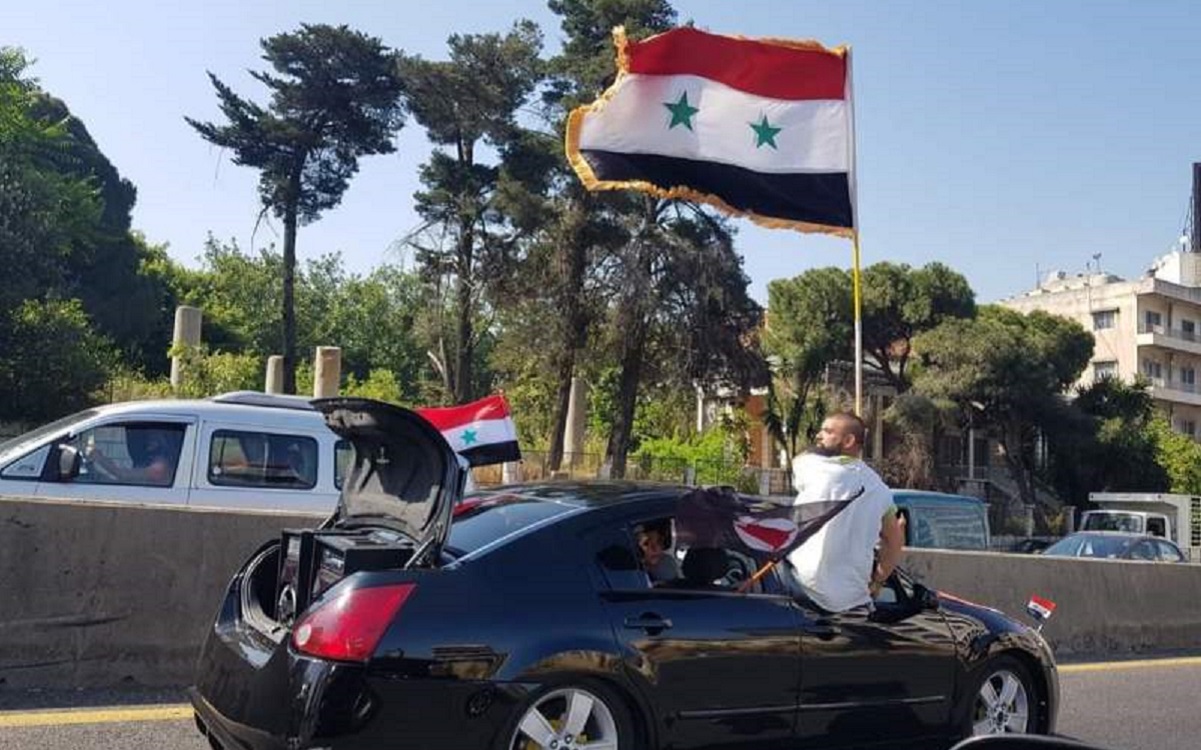 Syrian supporters of Bashar al Assad on their way to the Syrian Embassy in Beirut to cast their votes in the presidential election. Photo: Courtesy of the National News Agency

Lebanese supporters of anti-Syrian Christian parties clashed on Thursday with Syrian voters, who were on their way to vote at the Syrian Embassy in Beirut. They were expected to cast their votes in the second presidential poll since the start of the civil war in 2011.

Syrian President Bashar al Assad is running against two farcical counter-candidates, in a poll that is already set to see him win a fourth seven-year term.

While in Syria the vote is scheduled for May 26, Syrians abroad, including those residing in Lebanon, cast their votes on Thursday.

Supporters of Bashar al Assad flocked towards the Syrian Embassy chanting patriotic songs, waiving Syrian flags and pictures of their president. Voters were bused from across Lebanon, their cars playing loud music as they caused traffic congestion along Aley – Al-Sayyad highway that links the coast to the Bekaa Valley.

Groups of anti-Syrian Lebanese waited for the convoys at various crossroads in Beirut, outside the capital and in the eastern Bekaa region and attacked them with rocks smashing windows.

The effort of the Syrian Ba’ath Party to bring more people to vote in the presidential elections sparked anger from some Lebanese politicians, who saw the display of support for Assad as a provocation for the Lebanese who suffered during the Syrian occupation that ended in 2005.

Anxiety over the refugee presence

The issue of the Syrian refugees in Lebanon replicates for many Lebanese the pains of the Palestinian refugee crisis which led to the civil war, Hajj Ali explained.

Since the beginning of the Syrian crisis, the United Nations High Commissioner for Refugees (UNHCR) has reported that Lebanon has 865,530 registered Syrian refugees and estimates all Syrians in Lebanon at 1.5 million.

However, Christian politicians have reacted with anger at the display of political support for Bashar al Assad.

On the eve of the poll, Lebanese Forces leader Samir Geagea called for Syrians residing in Lebanon who vote for Assad to leave the country because, he said, they cannot be seen as refugees. He also called the poll “the farce-tragedy Syrian presidential elections”.

“When we called for the safe and dignified return of Syrians, you said we were racists!” he wrote on Twitter. “When we drew up a civilized plan for the safe and dignified return of the displaced, you opposed it and said that we are partisans. When you attack peaceful displaced persons, who will vote at their country’s embassy and ruin their safety and dignity, we call you Nazis, with only one difference, which is that this is the truth.”

In response, Lebanese Forces MP Antoine Habashi reacted on Twitter, saying that only Syrian refugees who were persecuted by the regime in Damascus should be allowed to stay in Lebanon as people displaced by the war. “The issue of the displaced be used to normalize the relationship with the Assad regime for narrow authoritarian political goals in Lebanon and at the expense of all the Lebanese people, is unacceptable,” he added.

The Phalanges also denounced on Thursday the “provocative processions that roamed the Lebanese regions, raising the flags of the Syrian regime and pictures of its president, Bashar al-Assad.”

“It was natural to expect the reactions that several Lebanese regions witnessed,” the statement said.

Hajj Ali says that, despite the clash on social media between FPM’s Bassil and Lebanese Forces politicians, their stances on the Syrian refugee crisis are not radically different.

“Christians, generally speaking, the Christian leaders, including Gebran Bassil and Samir Geagea, view the Syrian refugee presence in Lebanon negatively and they see it as a long-term kind of threat to the demographics which are not really looking good at the moment,” he pointed out.

“Also, populist rhetoric around Syrian refugees was spearheaded by Gebran Bassil, less so by the Lebanese Forces.”

An old and unresolved conflict

Christian parties, but especially the Lebanese Forces, have fought against the Syrian occupation of Lebanon and many of the faction’s members have been arrested, tortured, assassinated by Syrian intelligence, or have vanished in Syrian prisons.

Christian neighborhoods such as Ashrafieh still wear the scars of Syrian bombings in the 1970s. Moreover, the Syrian army siege in the largely Christian city of Zahleh in the Bekaa Valley during 7 months in 1980-1981 left scores of civilians dead.

Samir Geagea himself was imprisoned for nearly a decade by the Syrian forces in Lebanon, while General Michel Aoun, an adversary of Damascus back then, was exiled in France until the Cedar Revolution and the Syrian withdrawal in 2005.

During the occupation, Hajj-Ali explains, the Christian Maronite institutions have become major pillars of resistance against the Syrian occupation.

“The Maronite Church, specifically Patriarch Nasrallah Boutros Sfeir, was a leading figure against the Syrian presence in Lebanon in the 1990s up until the withdrawal of Syrian forces in 2005,” he said.

Even afterward, Sfeir as an exponent of the Lebanese Christian interests remained a major critic of the Syrian foreign policy in Lebanon after the withdrawal: the assassination of several journalists and politicians that were against Syria’s interference in Beirut’s politics,  the Syrian attempts to control the government in Beirut and a possible return to Lebanon through different means, as well as a critic of Hezbollah which was the representative of the interests of the Syrian regime in Lebanon.

For many people who have suffered under the Syrian occupation, the display of support for Bashar al Assad on election day has brought to life old fears and unhealed wounds.

“The scene of large processions, raising flags and pictures of a president of a republic from a foreign country that had a role in the Lebanese war, constituted a provocation to a large segment of the Lebanese, especially in light of the bloody conflict in Syria,” a statement of Seven party, one of the progressive independent factions established in 2016, read on Thursday.

“We will not return to normal relations with the regime of Bashar [al Assad], which has until now been rejected by the West and the Arab League for its crimes!” Former Information minister May Chidiac, said on Twitter. A journalist, Chidiac is seen as close to the Lebanese Forces party and a vocal critic of the Syrian occupation. She survived an assassination attempt in 2005.

Not all Syrians vote

Despite the demonstration of support for president Bashar al Assad and the buses filled with voters arriving at the Syrian Embassy in Beirut, many of the 1.5 million of displaced Syrians in Lebanon did not vote.

According to Al Manar, only 50,000 Syrian citizens made it to the polls on Thursday.

For many refugees, the presidential poll was not about choice, but about giving Assad the impression of the legitimacy of his continued rule over the war-torn country.

“Voting for this system, for this political side will damage our situation in the future. It is corrupted.  It is about power and who will stay in their positions. It isn’t going to help people in Syria. It is a play for the international community,” on Syrian who wished to remain anonymous told NOW.

“Why would I vote for Assad? He is the reason for what happened in Syria. His position in power, his actions lead to a weak and divided Syria.”