Stuck in the worst economic crisis in its history, Lebanon sees the exploitation of a potential gas field as a way out. But experts warn against corruption and the destruction of coastal areas. 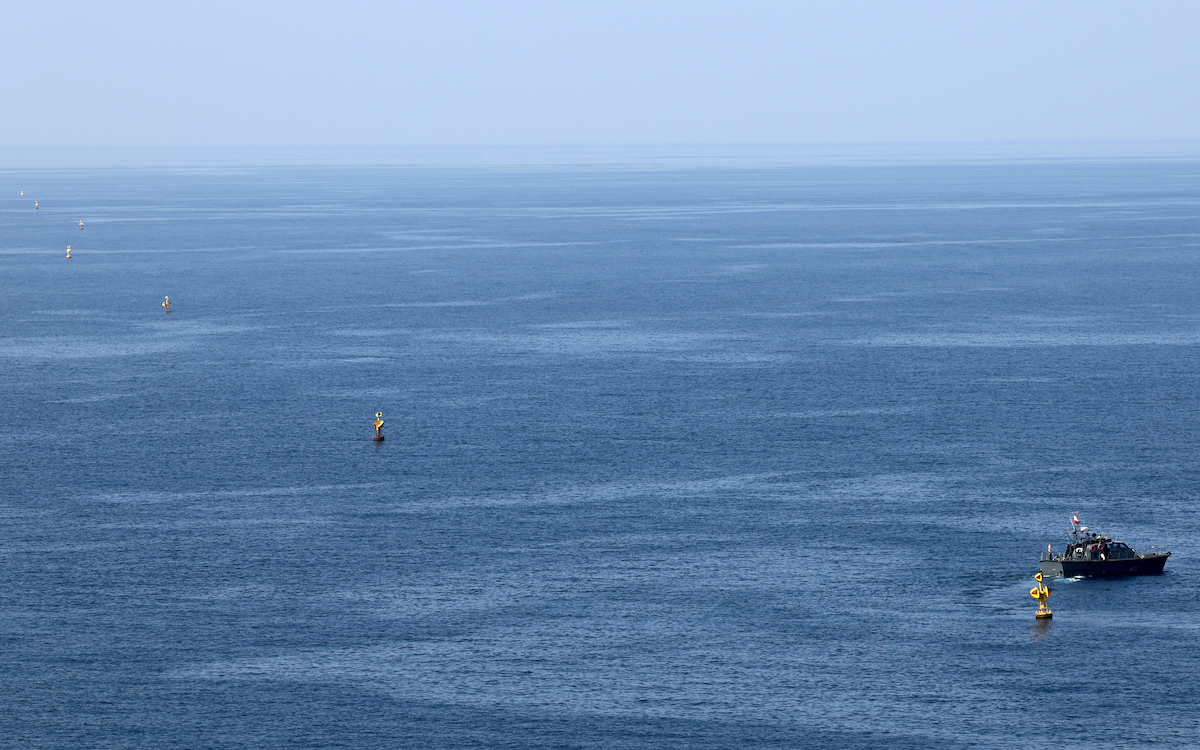 A Lebanese navy patrol boat is stationed next to a buoy marking the maritime border between Lebanon and Israel in the Mediterranean sea waters off of Lebanon's southern Naqoura and Israel's northern Rosh HaNikra on October 27, 2022. Photo: Jack Guez, AFP

For now, banana plantations line the turquoise coast around Naqoura, before giving way to olive groves in the gently sloping hills. But South Lebanon’s idyllic landscapes might be in for a change. Soon, its windy roads could be bustling with oil and gas tankers and intense traffic.

Á few kilometers from here, Israel and Lebanon signed an agreement on October 27 to delineate their maritime borders.

The two enemy countries have agreed – historically – on a line, under the sponsorship of the United States and France. This does not mean that the two countries are signing a peace deal and normalizing relations, but, rather, to exploit natural gas and oil beneath the water’s surface.

This is where Lebanon’s oil and gas adventure could begin. Exploration work is set to begin in early 2023 with possible exploitation from 2029 to 2049.

In Block 9 off the coast of Naqoura, French multinational TotalEnergies will lead the consortium and take charge of operations, followed by the Italian ENI and QatarEnergies. Other offshore blocks could be opened for exploration as early as December.

The industry would necessitate large-scale infrastructure, both on land and offshore. According to a 2012 environmental assessment, a simple support platform for exploratory drilling could take up to 1,000 square meters off the coasts, changing the landscape and ecosystems for the next 50 years.

Since 2019, Lebanon has been in the midst of the world’s worst economic and social crisis in 150 years. Lebanon’s political class is promising nothing short of a well-timed miracle: billions of dollars that will be used to turn the country around, to ensure continuous electricity when the state only produces, at most, two hours a day.

The outgoing president, Michel Aoun, celebrated the only victory of his otherwise disastrous term in office, by possibly bringing Lebanon into the “club of exporting countries”.

The local benefits could be significant: 6,000 long-term jobs and indirect revenues, and perhaps even income to invest in other forms of energy. Many people in Lebanon live with the distant hope that the crisis will end with black gold dollars.

“There is no proof for this yet [that there is even gas]. We need to find the gas or oil first” Diana Kaissy, an expert on oil and gas in the MENA region and a member of the advisory board of the Lebanese Oil and Gas Initiative (LOGI) and the executive board of the International Transparency Initiative, told NOW.

Together with 19 other NGOs, they make up the Coalition for Energy Governance (CEG), which aims to make Lebanon’s oil and gas process as sustainable and democratic as possible.

“Our future is tied to many uncertainties. If we ever find reserves, if they are marketable and if we ever manage to extract them in full and then use and sell everything; only then Lebanon will earn a maximum of $8 billion and only within 10 to 20 years,” she explained.

This is a fraction of Lebanon’s public debt, which reaches 100 billion dollars, or 150 percent of its GDP. “The gas revenues would never be enough to recover the country, and we must not repay the debt with it. Our only chance is to invest it in the real, productive economy,” Kaissy stated.

Together with LOGI and the CEG, Kaissy calls for the creation of a sovereign wealth fund like in Norway, with strong anti-corruption laws, as well as for democratic tools.

This small coastal area is the only one to have been preserved from concrete, it is crucial for many ecosystems and animal species.

Many criticized the undemocratic character of the negotiations and the tenders. “I was informed through the news,” newly-elected “change” MP Najat Saliba told NOW.

Lebanon’s political system is not ready for any oil and gas revenues yet. “We need to start creating proper legislation immediately,” Saliba affirmed, further confirming that she was contacting LOGI and the CEG to cooperate.

But civil society is concerned that under Lebanon’s notoriously corrupt political class, billions in oil and gas could push the country further into the doldrums.

“For the moment, there is no guarantee that this money will not disappear into thin air, like everything else: the reserves of the Central Bank, the savings of banks. In total, tens of billions have disappeared into the pockets of our political mafia,” Kaissy said.

And there is another danger, to the turquoise coasts of Naqoura this time.

“This small coastal area is the only one to have been preserved from concrete, it is crucial for many ecosystems and animal species” Iffat Idriss, founder of the marine protection association Operation Big Blue, also a member of the CEG, warned NOW.

They are privatized and concreted to 80 percent: ports, hotels, restaurants, roads. The buildings have grown since the end of the civil war in 1990, in the name of development.

“The coastal land of Naqoura was bought by businessmen and politicians” before the Ministry of the Environment could make it a protected area, Idriss explained. “We tried, but we had to give up very quickly,” she recalled with regret.

Financial speculation is rampant in Lebanon, and it goes hand in hand with the destruction of natural habitats.

Two species of protected turtles depend on its fine sandy beaches to lay their eggs and reproduce. Offshore, dolphins, whales and even monk seals populate one of the few spared areas of the Lebanese coast.

The risks associated with offshore gas exploitation are varied, according to Idriss. She lists “accidents between fishermen and industrial boats, gas leaks, explosions, fish contamination, noise that will chase dolphins and whales away from our coasts.”

Last but not least, oil spills are particularly dreaded – like the one that ravaged the coasts of southern Lebanon last summer after an accident off Israel’s coast.

“As the rest of Lebanon is downstream, the slightest accident could contaminate the entire Lebanese coast,” she fears.

“When last year’s spill happened, it was chaotic. The Tyre municipality refused the army’s intervention to clean up our shores because it saw it as a competition,” Nahed Msayleb, who directed Tyre’s Coastal Natural Reserve at the time, recalled to NOW. “I had to organize the whole clean-up myself with volunteers and the help of NGOs, we picked up the oily mud with gloves and shovels.”

Next time, things could be different – especially if Lebanon adopts a new contingency plan, as LOGI and the CEG demand.

But in all cases, the Tyre natural reserve could suffer from the oil and gas industry.

“A big part of tourism here is to see the tortoises on our beaches, but they could adopt a different route to avoid the vessels and offshore platforms,” Msayleb stated.

For her, the project should nonetheless go on as long as strong environmental norms are respected.

“Lebanon’s crisis is so bad that we can’t exclude any option – it is totally surreal to live in a country that has no electricity,” she said.

One advantage of the whole operation could be unexpected: As private generators are extremely polluting, the use of natural gas to generate electricity has the potential to make Lebanon’s air safer to breathe.

It is a new threat, and we are opposed to anything that could further weaken the Mediterranean fauna and flora – so we’re obviously against extracting natural gas. But who will listen to us? The government will try to portray us as being against the economy and the other citizens.

In 20 years of operation, the industry could furthermore release 11 to 18 kilotons of greenhouse gases, according to the Strategic Environmental Assessment (SEA) commissioned by the Ministry of Environment (MoE) in 2020.

Together with the Ministry of Energy and Water, the MoE can veto any oil and gas project if it is not up to environmental standards.

The latter adopted the goal of reducing its emissions by 15 to 30 percent by 2030 in the wake of the Paris Agreement.

While the domestic use of natural gas would not infringe on Lebanon’s pledge, exporting oil and gas abroad would not only annihilate its climate goals but also represent severe risks to the traditional fishing industry, to animal species and to the local biospheres, the SEA found.

Which future for Lebanon

According to Kaissy, Lebanon has many other much less risky assets.

“Currently, it’s a gold rush: everyone sees natural gas and oil as the miracle solution for all our problems. But no one in the political class has asked themselves which energy mix is really best for Lebanon,” criticized Kaissy.

“We have wind and rivers in Akkar, geothermal energy in the Bekaa, we could massively use solar panels and use wind turbines off the coast. Every region could contribute to our energy transition, it would benefit everyone,” she explains. Before the civil war, 70 percent of the energy used in the country of the Cedars came from its hydraulic dams.

“Private development projects, concreting and car sales have made us 95% dependent on oil,” she sighed.

“The government is not trusted to protect the environment or its citizens at all,” Idriss said. And for good reason: she has been fighting against the government’s polluting projects for some 30 years. In Lebanon, 60 associations have formed a coalition to protect nature and citizens: the Lebanese Eco Movement (LEM).

“For the moment, gas and oil are new to us, we know nothing”, she admitted, being used to Lebanon’s waste crises, controversial dams or illegal quarries.

“It is a new threat, and we are opposed to anything that could further weaken the Mediterranean fauna and flora – so we’re obviously against extracting natural gas,” Idriss stated. “But who will listen to us? The government will try to portray us as being against the economy and the other citizens.”

“We’ll have to continue and fight against the industry, despite our exhaustion,” she added.

While the COP27 is taking place a few hundred kilometers away in Sharm el-Sheikh, Egypt and with the latest Greenpeace report warning that global warming is twice as bad in the Middle East as compared to elsewhere, Lebanon is now at the crossroads: it must choose on which model it will build its future.