Lebanon and Israel have finally agreed on a deal demarcating their maritime borders, but the deal will do little to help Lebanon without first passing reforms. 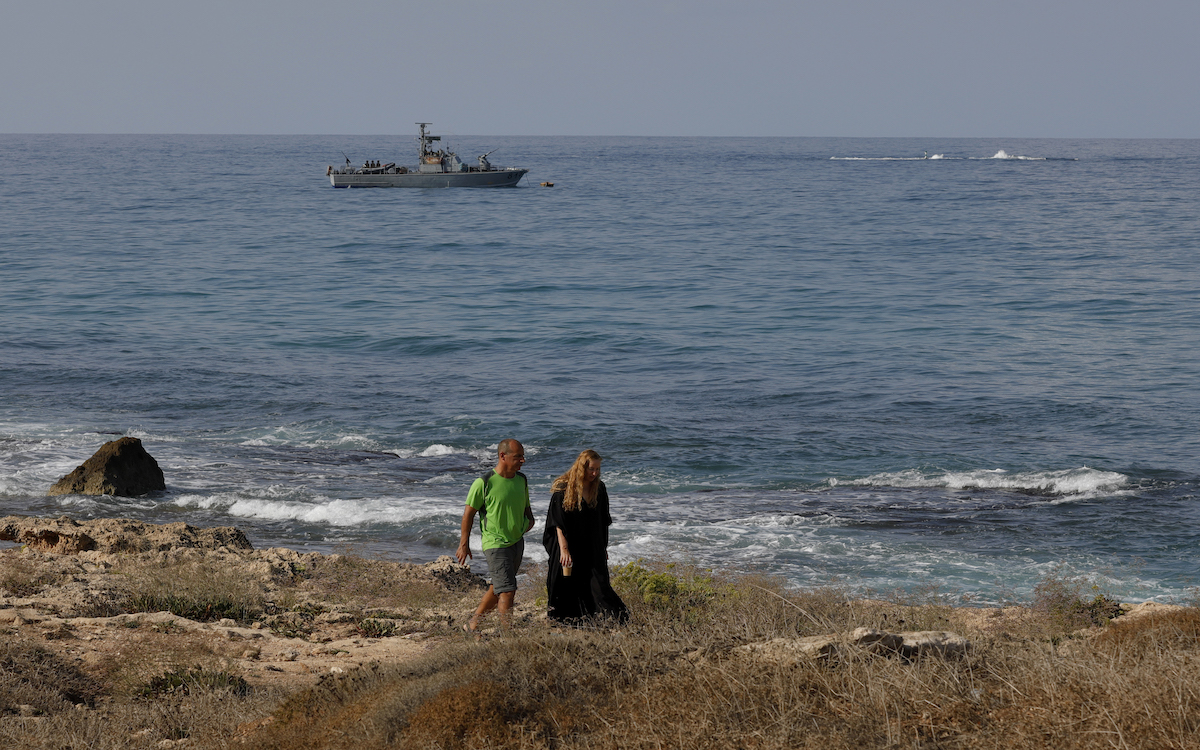 People walk along the beach as a navy vessel patrols the Mediterranean waters off Rosh Hanikra, known in Lebanon as Ras al-Naqoura, on the Israeli side of the border between the two countries, on October 7, 2022. Israel said on October 6 that it will reject Lebanon's amendments to a US-drafted proposal on resolving a long-running maritime border dispute over gas-rich waters off the countries' Mediterranean coasts. Lebanon and Israel have no diplomatic relations and their land border is patrolled by the United Nations. The two sides are technically still at war. Photo: Jalaa Marey, AFP

After months of US-mediated negotiations, Lebanon and Israel have each independently announced that they are satisfied with a deal that would demarcate their maritime borders.

Prime Minister-designate Najib Mikati thanked the US mediator, Amos Hochstein, for his efforts in helping broker the deal, while caretaker Israeli Prime Minister Yair Lapid said that this “unprecedented deal will strengthen Israel’s security, bolster our economy and deliver cleaner, more affordable energy to countries around the world.”

US President Joe Biden even called Lebanese President Michel Aoun to congratulate his Lebanese counterpart on the deal.

Outside of Israeli opposition leader Benjamin Netanyahu saying that Israel was capitulating to Hezbollah, most politicians celebrated the finalized deal.

However, analysts say that without first passing systematic reforms, any money that is brought in as a result of the maritime border deal will do little to help Lebanon’s ailing economy.

“One has to establish the parameters here, as without reforming the system, no sustainable solution could see the light,” Mohanad Hage Ali, a senior fellow with the Carnegie Middle East Center in Beirut, told NOW. “So even if Lebanon manages to extract gas, and increase government revenues, the lack of reforms means the country will fail to address its problems long term. Any revenues will face a similar fate to the dwindling depositors’ money at the central bank, only serving the goal of kicking the can further down the road, to avoid difficult political and economic decisions.”

According to the maritime deal’s final agreement, a copy of which was seen by NOW, Lebanon’s borders will be officially at Line 23, with Lebanon taking the Qana Prospect and Israel taking the Karish Field in Line 29.

The deal also states that though part of the Qana Prospect, officially known as Block 9, sits partially in Israeli territory, Israel will not “object to reasonable and necessary activities” when it comes to exploiting any fuel that is found in the prospect. But, in return, Israel would receive royalties for any fuel that is taken from their side of the border.

While Lebanon agreed to demarcate its border at Line 23, it had previously pushed for Line 29, which would also include the Karish Field, in what negotiators said was in accordance with international law.

“The tactic at the time was that they claim Line 29 because rightfully they can get it based on international law and, at least, because these are negotiations, they have the upper hand in the negotiating because they were asking for extra square kilometers at the same time there is the Karish there, so the Karish could be the pressure point so that the Israelis come to the negotiating table and negotiate and come up with a deal that is in favor of Lebanon,” Laury Haytayan, an oil and gas policy expert, told NOW.

However, the Americans and Israelis refused to negotiate based on this premise, forcing Lebanon to drop its claim to Line 29 and begin negotiations starting at Line 23.

At the start of the negotiations, though, Lebanon’s motives were purely political, with little thought given to any financial and economic gains that could be brought by a maritime border deal, viewing a deal as a means of negotiating with the international community for aid to support Lebanon amid the economic crisis.

Eventually, the deal became a golden opportunity for Lebanon to not only potentially unlock oil and gas revenues, but to also see increased investment in Lebanon by foreign companies.

The same day that the deal was completed, the French company Total sent representatives to Lebanon to meet with officials to discuss the beginning of the exploratory phase in the Qana Prospect as soon as Lebanon and Israel officially sign the agreement. This would open up the possibility of more oil and gas companies looking to come to Lebanon and invest should any significant resources be found in the Qana Prospect.

“If companies are coming, in the oil and gas sector, that would have a positive effect on other companies coming and investing in other sectors,” Haytayan explained. “This is how the government and the political class are seeing this deal. That it will have a direct benefit on that and, if resources were found, that would make it even better because that would make it even easier for them to negotiate with the IMF and other international donors and financial institutions.”

Lebanon’s politicians argue that this fuel is a way out of the three-year economic crisis that they can tap into without having to pass any of the reforms demanded by the International Monetary Fund. Haytayan has disputed this, as those claiming that the gas will solve Lebanon’s financial woes are the “same people that have caused the crisis” and that any assumption that they can effectively handle any fuel that is discovered is simply “not right.”

The need to reform

Should any significant gas reserves be discovered in the Qana Prospect, it could almost undoubtedly provide Lebanon with a major lifeline that could help the country grapple with its worsening economic crisis and help Lebanon start to rebuild.

These are the people who have been resisting for three years any kind of reforms to sign an IMF deal that will help us with the crisis and, at least, put us on the right track. Today, they are using this oil and gas as a way to bypass the reforms and they are using this deal as a way to get the green light from the Americans to unlock some investments or some money that might come from anywhere.

However, without first passing significant reforms, this money will likely be wasted.

According to Hage Ali, without these reforms, any income from exploiting the Qana Prospect would be like putting water into a “leaking tank” with any profits just flowing out and providing no help to the country.

“Any positive news in the country will help restore some of lost confidence in its ability to bounce back. This could help in attracting some investments, and probably more tourists in the upcoming seasons,” the analyst stated. “But given the ongoing depreciation of the Lebanese pound, in light of the raise in public sector salaries, other dynamics might kick in the upcoming weeks, and the country’s politicians will have to smell coffee again.”

Haytayan has even less faith in the political establishment’s ability to handle the money brought in through the exploitation of the Qana Prospect, arguing that the politicians were the same people who mishandled the country’s finances for decades, leading to the economic crisis, and making it impossible to trust them with something as significant as this.

“They cannot be the ones who will be managing effectively the oil and gas sector,” she said. “These are the people who have been resisting for three years any kind of reforms to sign an IMF deal that will help us with the crisis and, at least, put us on the right track. Today, they are using this oil and gas as a way to bypass the reforms and they are using this deal as a way to get the green light from the Americans to unlock some investments or some money that might come from anywhere.”

Because of this lack of trust in Lebanon’s political elite, Haytayan says that it is important that Lebanon establishes a sovereign wealth fund to manage any resources that come in as a result of drilling in the Qana Prospect, a notion echoed by newly elected opposition MP Marc Daou, in order to prevent institutional corruption from sinking its teeth into the money that should go towards helping Lebanon out of its crises.

Even without a sovereign wealth fund, Lebanon requires a “strong financial system” that does not just consist of passing “cosmetic” laws every few years, so that none of the profits are misused.

Furthermore, Haytayan argues that Lebanon needs to establish a national oil company if it wishes to continue having equities or shares should gas be discovered.

However, the country is still years away from even knowing if there is enough, much less any, gas under the water to exploit.

A long way to go

A major criticism by those in Lebanon who are opposed to the deal is that Israel will be able to begin drilling in the Karish Field immediately following the signing of the deal, while Lebanon has no idea if the Qana Prospect is even as profitable as it has been marketed.

It can take around three years or more for the exploratory drilling to conclude without any guarantees that there will be significant enough fuel deposits that can be exploited.

The Karish Field itself was discovered in 2013 and production is only going to be beginning this year.

The international community has been pushing for three years for this political class to do the reforms that they [still] haven’t done because it goes against their own interests. Whatever reforms that they are trying to do are just cosmetic reforms.

Lebanon’s contract with Total is for an initial three years of exploratory drilling, meaning, once the deal is signed, it may not be until 2025 before production can even begin, assuming that there is enough gas in the Qana Prospect to be commercially viable.

“That is all we can say without giving an exact timeline because you never know the considerations and you never know what could be the changes and could be the things that could affect in the production of gas; either making it much faster or slowing it down,” Haytayan explained.

The discovery of gas could prove to be a game-changer for Lebanon as, if properly handled, it would give the country’s struggling economy a much-needed boost and give it a source of stable income for years to come.

But, until reforms are passed, there is little hope that this deal with Israel will help lead to the saving grace that Lebanon is in desperate need of.

There is also little hope that the government will finally enact the reforms that are being demanded by the IMF and international community.

“The international community has been pushing for three years for this political class to do the reforms that they [still] haven’t done because it goes against their own interests. Whatever reforms that they are trying to do are just cosmetic reforms,” Haytayan stated.

Even if the reforms do come to pass, they are likely to be surface-level reforms that do little towards actual change in Lebanon.