HomeOpinionCommentaryPrivatization NOW, and here is why
Commentary
Samara Azzi

Privatization NOW, and here is why

Investment banker Samara Azzi explains how Lebanon’s captured government borrowed money from the banking system to finance corrupt networks and then adopted a “kill the creditor” policy. She advocates for the privatisation of unprofitable state assets that create more debt. 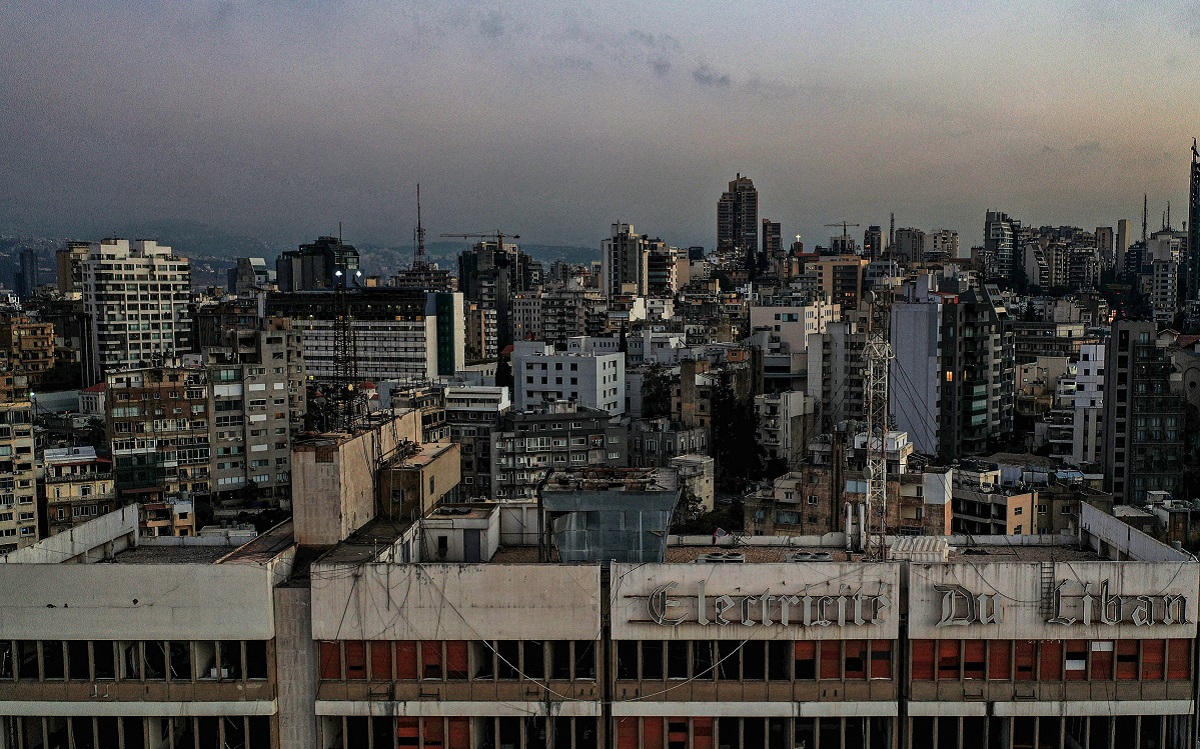 The Électricité du Liban (Electricity of Lebanon or EDL) building in Lebanon's capital Beirut, in darkness during a power outage. Photo: AFP.

Social media defines the current Lebanese financial crisis. It can create opportunities and pitfalls for politicians and policymakers and it can be a source of unmediated real-time info for everyone else.

The default of the Lebanese government in 2019 was the second time financial markets saw a financial crisis play out on Twitter.

In 2019, a group of financial experts came together to look at the gross exposure of the Lebanese banking sector to the government default and demanded the hanging of the Lebanese bankers in Martyrs Square.  The group, called the NERDS, later dissipated. It was totally oblivious of the political situation that got us to where we are today.

The NERDS ensured that the conversation was kept at the economic level, and steered away from pointing the finger at the political class and the geopolitical situation Lebanon found itself in. Before you knew it, international financial analysts went back to reading the news and stopped reading Twitter.

The number of likes these so-called experts collected dramatically declined.  Some had stuck to the facts, but most slid towards populist ideas: that banks were to blame for the mess the country was in.

It is no wonder that Lebanon came to a default

Political Shiism or “shi3iye el siyesiye” has no real access to money. Iran has been under sanctions and alienated from financial markets since the Islamic Revolution of 1978. That’s 44 years ago.

Development banks or DFIs(Development Financial Institutions) do not operate in Iran. In April 2020, as the COVID-19 crisis hit and the number of deaths was rising, Iran asked the International Monetary Fund for a $5bln loan to fend off the pandemic. The US blocked that request.

There is no World Bank in Iran. No IMF program. No international investors. And the West ensures that if you happen to fall into that geopolitical sphere, you too will suffer the consequences. Dollars and Mehwar don’t mix!

But in Lebanon, political Shiism has been controlling the government for many years and has been living off the robbery of state assets.

When the state ran dry, these politicians had nowhere else to go to finance their oversized deficit. So, the corruption that once represented, let’s say, 10 percent of government spending grew to represent 50 percent of government spending as funds stopped flowing in. Same spending, smaller pie now. That’s how probably the biggest heist in the history of any nation happened: they robbed the people blind!

Corruption increased to an unprecedented level in the last few years simply because when you can’t produce, you can’t draw investments and you can’t borrow, you steal.

Cut out from international markets, with CEDRE stalling because of the political instability, and with international donors digging in their heels with requests to reform, or no money will be granted, the system, which is unable to reform itself, resorted to robbing its own people. What advantage does it (the mehwar) have to reform itself if it knows it cannot access any funding?

When a debtor defaults, banks usually ask the debtor to bring all of their assets to the table.  In this case, the Lebanese government defaulted on Eurobond holders and its own banking system, ensuring that the Lebanese depositors were locked out of their money.

The majority of the debt that led to the default was taken up by Electricite du Liban, the state-owned electricity company, in addition to defending the LBP peg.

To simplify this: the state never had enough revenue to cover its deficit, it resorted to borrowing from local banks and international investors.

Why did the state never have enough revenue? Because tax collection is bad, because state enterprises are robbed and because major sources of revenue to the government never made enough money to feed the militia, the mafia and the government together.

State assets were used by the political elite to finance themselves and their cronies, ensuring a weak and inflated government sector all around.

So, most state assets are in negative gearing.  Negative gearing is a commonly used term when expenses associated with an asset (including interest expenses) are greater than the income earned from the asset.

So where did the government get this extra income to ensure that asset stayed functional? It borrowed money from the central bank and the private banking system.

Hence the Lebanese debt, which at default reached $97 billion, is owed by every citizen for generations to come. It is public debt.

If you divide the debt by the number of the population – let’s say 6 million – you get every citizen owing $16,000 in a country where the average income has fallen to 40 dollars per month. That makes 480 dollars a year. It will take the average citizen 32 years to pay back their part of the national debt. A lifetime of misery and poverty.

Remember those expert populist voices I mentioned at the beginning? When the banking system demanded that the state pay back its due with its assets, those populist voices were heard all the way to Malta calling on the government not to bow, out of national interest. The government took that chance and proceeded with the “kill the creditor attitude”. Kill the banking system that is the creditor.

There are those that argue that the debt given by the creditors is unsecured debt. But is a government that defaults on a creditor without negotiating with the creditor an ethical government, or a militia?

Ethics in international financial markets refers to the standards for morally right and wrong ways to conduct business. Is it morally right for our government to default on unsecured debt from its own citizens and then turn around and play “kill the creditor”? Are you then an ethical government or a militia?

What exactly is the national interest here anyway?

The populists would argue with you that the state assets are owned by all the Lebanese, whilst not all the Lebanese held accounts in the banking system. Fair enough, I say.

However, what are we exactly trying to save? The EDL that is a negatively geared asset with debt up to its eyeballs? I do not recall a time when EDL was profitable. So if the national asset was unprofitable, what benefit did it bring to the citizen? Nothing, absolutely nothing! It accumulated debt on behalf of you and me and that’s what we call national debt.

EDL got us, the citizens, $42bln in debt in the last few years. That’s you and me and poor Joe that have to pay for it. So why are the populists trying to keep it in the hands of the government? Protect the poor citizen? But that poor citizen now owes $16,000 in national debt and has to pay it too. I fail to see the argument on protecting citizens.

In 2019, I wrote a tweet about the telecom sector and why it should be privatized. In a nutshell, I summarised how, if you keep the sector in the hands of the government, it will end up like EDL – a state asset where the government has to borrow to spend on it.  And here we are today! We didn’t need a crystal ball to see this train coming. The telecom sector is on its last breath needing support from a broke government.

I am an advocate of the privatization process

Some might argue: “Well, we can’t sell now, the political elite and the rich will take up all the assets for cheap”. The assets ARE cheap, they are in debt and highly geared. Let’s fix them and sell them! But who is going to fix them, the same people who live off them? Hence, they will always be worthless.

Whether PM Najib Mikati or Rupert Murdoch picks up the asset, what difference does it make? You have a problem with Mikati as a politician, not necessarily as a businessman, and your problem is with governance in your own public sector, not with the business elite.

As a businessman, Mikati has proven himself to be successful. Let’s say Mikati doesn’t buy the telecom company, but Carlos Slim himself comes and buys your telcos. What difference does it make? The assets have been run to the ground and have become worthless in comparison to the sector worldwide. They are a burden on any investor; they are better off running for-profit rather than being subsidized by government national debt.

Whoever ends up buying it, when the asset is run for profit the shareholder can be held accountable for the service and has an interest in delivering service to you, provided there is no monopoly. It is up to the government to ensure that there is no monopoly and enforce proper governance.

Some oppose the Lebanese Banks Association’s latest proposal, which asks for the state to move its own assets to replenish the central bank coffers so that it can repay its creditors.

Do you have any more faith that this political class, which takes orders from  “political Shiism” by virtue of it being in that mehwar/axis, can ever repay its debt while being cut off from funding?

Do you have any faith that a country isolated from the world’s financial market and moving at a snail’s pace with development money (World Bank and IMF), robbed because its de facto governors (Hezbollah) are unable to access money, can ever resurrect by itself?

What makes you think the robbery will stop? You know why they want to keep the assets? Not because they are valuable or profitable, but because they can continue the theft, and that’s how this system they rule survives. On robbing a country’s resources and state enterprises.

Privatizing for fresh dollars is always better than continuing the accumulation of national debt. It’s called a Stop Loss strategy!

Wake up Lebanon! Should you not vote for direct privatization of assets, as I gather the mehwar that is cut off from funding will never do, then maybe you should consider the privatization of the management of those assets.

The article was published in Arabic in Nidaa al Watan.