With the war in Ukraine raging on, most of the world has come out in support of Ukraine, but in Lebanon, Russian president Vladimir Putin has some admirers. 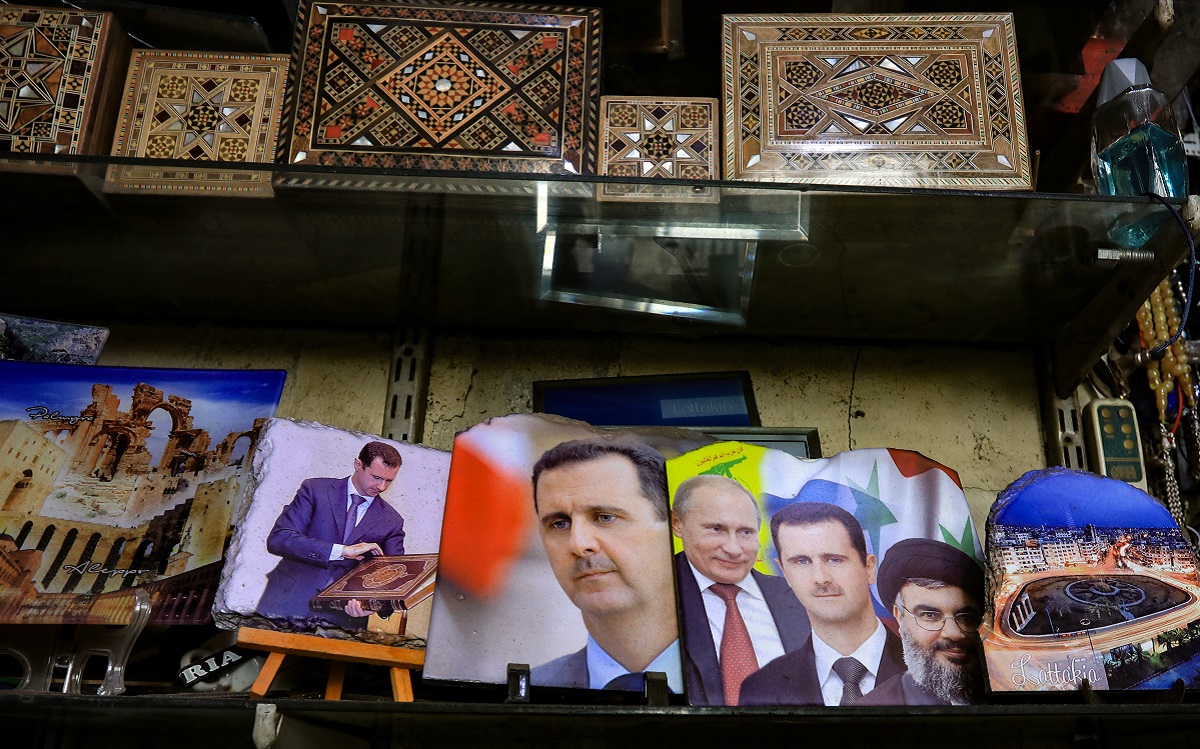 Objects with images of Syrian President Bashar al-Assad, Russian President Vladimir Putin and head of the Lebanese Shiite movement Hezbollah Hassan Nasrallah, are displayed in a souvenir shop in the old quarter of the Syrian capital Damascus, on February 27, 2022. Damascus is a staunch ally of Moscow which intervened in the Syrian civil war in 2015 by launching airstrikes to support the Assad regime's struggling forces. Photo: Louai Beshara, SANA / AFP.

Alain Atallah, 39, admin of the Facebook page “Friends Of Vladimir Putin And Russia In Lebanon”, said he started his page following Russia’s intervention in the Syrian conflict because he saw Vladimir Putin as a strong, independent leader.

“He’s not only a strong leader, but he’s also politically autonomous and does not surrender to any outside influences,” Atallah told NOW.

Atallah feels strongly connected to Putin also because he is Christian Orthodox. He considers Putin to be the only leader that still prioritized and protected Christian values.

“He builds churches and is against homosexuality, unlike other European countries that tear down churches and promote homosexuality. He’s safeguarding true Christian values, which is a rare thing nowadays,” the man said.

Attalah is against war and believes peace to be the better option but “things can get out of hand at times”.

He said he was bullied online and got his page hacked due to a large wave of hate when the fan page launched in December 2017 . He then contacted the Russian Embassy in Lebanon to notify them of the page’s existence.

“At first they didn’t say anything, but two years later they invited me to an event they had organized and presented me with awards of appreciation for the page, one of them was a T-shirt given by the Russian Ministry of Defense,” Atallah said.

Like Atallah, some Lebanese admire Putin and his style of leadership. They find a role model in him. Many share his pictures on social media together with anti-Western and pro-Kremlin narratives and engage in political debates against voices that they accuse of spreading Western propaganda.

Russia’s role in the Middle East became more prominent in 2015, after its military intervention in the Syrian conflict, thus gaining popularity amongst supporters of Syrian President Bashar al-Assad and his Lebanese allies for the support offered to Damascus.

Ramzi Ismail, political psychologist, PhD researcher, and associate lecturer at the University of Kent, explained that Putin’s personality was characterized by a style of authoritarian aggression that constructs a right-wing authoritarian (RWA) sociopolitical attitude, which comes with a strong desire to dominate. These traits fit aspirations in groups of Lebanese society, Ismail says, as RWA attitudes and social dominance are correlated but not necessarily one and the same. Both of these traits can be higher in societies where democracy is less functional or less effective.

“Putin is seen as the representative of the highest authority that can do no wrong,” Ismail told NOW.

In light of the recent Ukrainian-Russian conflict, Putin’s fans in Lebanon are choosing to side with Russia, even though some of them prefer peaceful resolutions over war.

“Russia is like the father, Ukraine is like the young son who’s rebelling against his father. The father needs to make sure that the son does not do anything that will harm either of them, so discipline is necessary,” Walid, 21-year-old student who wished to remain anonymous, told NOW.

The Russian Embassy in Beirut responded the following day, voicing discontent over the Lebanese official position on the war in Ukraine.

“The statement… surprised us by violating the policy of dissociation and by taking one side against another in these events, noting that Russia spared no effort in contributing to the advancement and stability of the Lebanese Republic,” the statement said.

The Embassy also published on its Twitter account a photo of Putin from the Hezbollah controlled southern suburbs of Beirut saying that “ The Lebanese Shiite in the southern suburbs, are waving the Russian Flag and hanging posters of its president Vladimir Putin, to condemn the statement made by the Foreign Minister Abdullah Bou Habibi, that opposed the military operations “. The tweet was then corrected and removed, but Lebanese media outlet Megaphone saved the screenshots.

For Walid, who asked to change his name in fear of his opinion having negative repercussions on his personal life, Ukraine could have avoided conflict if they would have simply “listened” to Russia.

He says that Ukraine’s wish to join NATO was a direct threat to Russia’s internal security and could lead to a potential future threat to the country, most notably by the US.

“If the Russian borders are compromised and the US gains easy access to them, they could easily plan attacks whenever they wanted. Russia needs to protect its people and its borders,” Walid said.

The student said he admired Putin for his persistent efforts to unite the Ukrainians with the Russians as one people and his promotion for a shared national identity in both countries. He quotes events from Russian and Ukrainian history to support his stance.

He speaks in a flat tone, keeps a poker face, and doesn’t show emotions. There are very manly traits that confuse people and make him unreadable. People struggle to know if he’s pleased or displeased, thus making them self-conscious about how they behave around him.

For centuries, he says, within the Russian Empire, Ukraine was known as “Malorossiya” or “Little Russia“. Czarist policies in the 18th century suppressed Ukrainian language and culture in order to strip Ukraine of an independent national identity.

Walid contrasted Putin’s consistent unifying talking points made by Russia and its leaders with the divisive sectarian rhetoric used by Lebanese politicians to separate and cause tensions. He believes that the unity of the people under the “Russian” label has derailed several internal conflicts.

“All the countries in the world have divided societies, in the US it’s the people of color against the whites, in Lebanon we have 18 sects always arguing, Putin promotes the unity of the Russian people and that’s it,” he explained.

When it came to the war, he believed aggression was necessary when “the child is rebelling against the parent”.

The enemy of my enemy

For Walid, there were worse aggressors than Russia in the world that people don’t take notice of.

“Israel is much worse. They invaded a land that was never theirs and attacked the people inside their homes. Ukraine however, was part of the Soviet Union and  Russia is not doing a full-blown attack, they’re being very strategic,” Walid said.

For him, Russia is a country that the Lebanese could easily travel to, the visa process was less difficult than Western countries, it was also easier to obtain citizenship if you marry a Russian citizen.

But a major factor that plays into the Russian appeal is an anti-US stance.

Jad and Ali, 24 and 25, who live in Beirut, would prefer not to reveal their full identity in fear of security threats, also said they support Russia because it stands against America.

“Back when America invaded Iraq in 2003, no one called it an invasion the way they’re doing with Russia. The west doesn’t care about the Middle East and the conflicts they’ve caused us,” Jad said.

Both said they were also supporters of Iran and their local ally, Hezbollah. For them, the Western media covering the conflict is purposefully trying to paint Russia as the “bad guy”. They are both admittedly anti-war, but still admire Putin for his military strategies.

“He’s a man of his word. He planned, he warned, and then he attacked. He doesn’t tolerate mistakes nor does he accept outside pressures,” Ali said.

The two men explained that many Iran supporters in Lebanon did not side with Russia for its political alliance with Iran. Instead, they were simply swayed by the war videos and enticing sound and visual effects.

“A lot of these supporters don’t really know what’s happening. They get their information from news shared on Whatsapp groups. But the content of some of the videos circulated appeals to many, even if they were fabricated, they are still effective,” Jad said.

Some videos circulated on Tiktok showed Putin as the compassionate leader that meets with a blind teen journalist or a down-to-earth, caring man that carries children on his shoulders.

Political psychologist Ismail explained that people with high RWA prefer to restore the past and remain in the realm of conventionalism.

“They like the past because there’s no chaos there. These people fear uncertainty and change. They question the repercussions that change might bring them,” he said.

He also explained that Putin’s behavioral elements contribute to his intimidating, unpredictable image.

“He speaks in a flat tone, keeps a poker face, and doesn’t show emotions. There are very manly traits that confuse people and make him unreadable. People struggle to know if he’s pleased or displeased, thus making them self-conscious about how they behave around him,” Ismail said.

Supporters of the Russian president, he added, are drawn to the figure of a “caregiver father”, where the conventional idea of the man, as the protector of the tribe, remains the ideal.

Indeed, for Walid, Putin is a caring father figure who disciplines his children out of love, a leader that cares about his people.

“If every country had a leader like Putin, the world would run smoothly,” Walid said.