Layers of crisis in Lebanon threaten the upcoming school year as educational institutions struggle to secure fuel for buses, electricity for their classes and teachers to make up for the ones who emigrated. 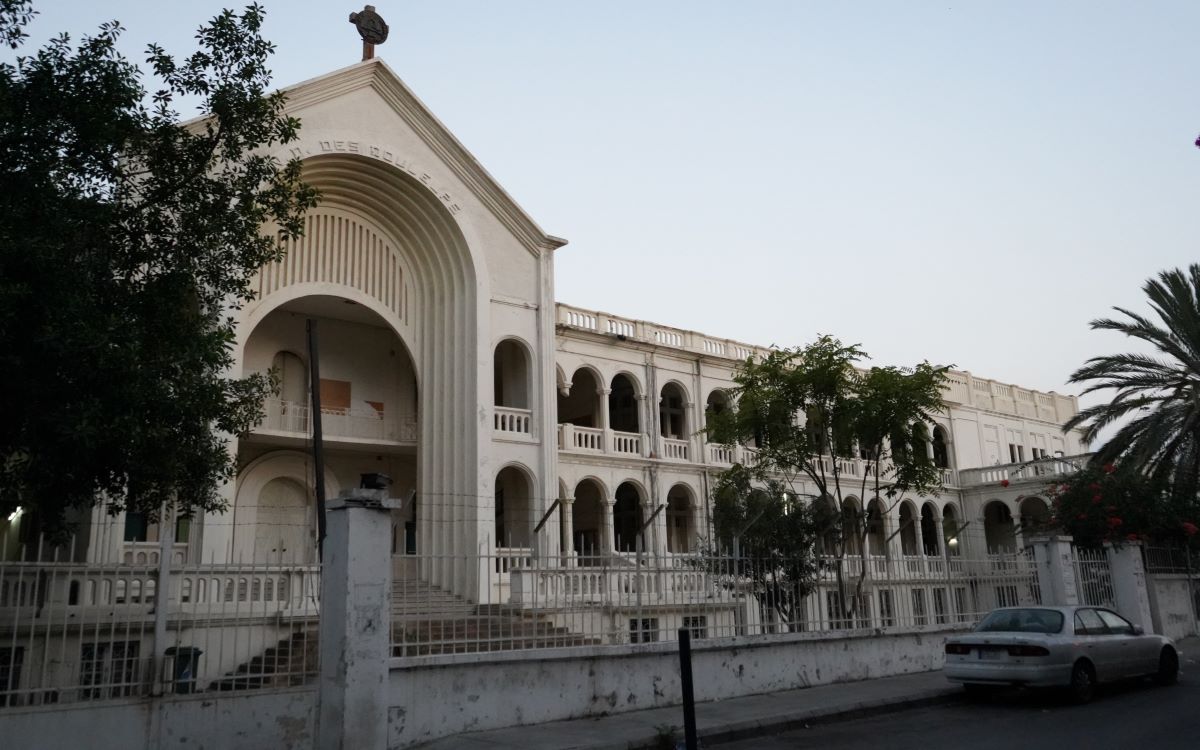 The gate of the Lebanese University - Faculty of Fine Arts in Beirut. Photo: Dana Hourany, NOW.

Saritta Trad decided to open 123 Autism School when she returned to Lebanon from the US with her son, Ricky, and realized that it was hard to find a school with a curriculum and teaching method that focused on children with special education needs. The new school opened its doors in September 2019.

A month later, the economic crisis hit Lebanon. Anti-government protests sparked in October 2019, the Lebanese pound started devaluating and banks stopped allowing clients to withdraw dollars. Shortly after, in spring 2020, the COVID-19 pandemic forced the country into several lockdowns. And then, in the spring of 2021 the fuel crisis hit.

The school collaborated with The New England Center For Children, which required USD payments for the special curriculum accreditation. Transfers became harder due to bank restrictions after the financial collapse and the fact that most parents were now only able to pay the fees in Lebanese pounds.

“Our tuition fee was already expensive and we did not want to increase it to not add more stress to our families. However, this meant that our employees’ salaries were now heavily devalued,” Trad said.

“As you can imagine, with our tuition remaining almost the same, it was difficult to continue operating the school while expenses increased tenfold,” she added.

“The ministry wants to start the year under unrealistic conditions. We don’t have access to fuel nor to electricity so we’re trying to reach out to NGOs to provide some.”
Rima Ahmad Reda, director Burj Al Barajneh’s First Public School for Boys.

The fuel crisis also affected the school’s running hours and the staff’s ability to commute. The electricity was interrupted more than ten times in six hours, which forced the school to send their students home sometimes at mid-day.

In August 2021, Trad gathered the staff and the parents into a meeting and told them the school would close.

The compounded crises of gas shortages, power cuts, and the currency devaluation, impacted the education sector more than government officials are ready to admit.

Minister of Education Tarek Majzoub announced in a press conference on August 23 that public schools would open their doors on September 27, while private schools were told they could open when they felt ready. Majzoub also stated that classes were to be held in person for four days a week. Schools are left to decide if they would have one day of distance learning or would ask students to come in person.

“In addition to the educational plan that has been developed, financial and economic steps will be taken regarding returning to school, as we cannot wait for a solution to economic issues without students going to their schools, and during the next week we will have positive signs,” Majzoub said in a statement.

But, many schools, especially private institutions, announced they might delay the beginning of the school year due to difficulties in securing fuel to power the generators, to get the busses running and offering wages to keep teachers from emigrating.

There were tears when Trad told teachers, therapists and parents that 1 2 3 Autism School was closing down.

The staff was left without a job, while parents were now left without many options for their children’s education.

Only a limited number of schools in Lebanon offer education programs for children with special education needs, and places are very limited. Children are put on waiting lists and selected according to their academic and social integration capacity.

Trad explained that there were other centers that offered therapy for children on the spectrum but many of them did not offer an equivalent to the intensive in-person learning for the 2-14-year-old age group that 123 Autism School would offer.

Many schools moved their classes online during the pandemic, which doesn’t work if the students have special needs and especially if they’re young. Autistic children, and SEN children in general, often need a shadow teacher and physical therapy to be able to perform academically at their true potential.

“Many of our parents had moved their children to our school when it opened because other schools no longer had the resources available to help the families. Unfortunately, those children will now be forced to stay home and be left without services as many of them are not able to learn online as well. “

No fuel for generators, no classes

Even if they don’t face complete shutdown, most schools in Lebanon may face delays in the beginning of the school year, mostly due to fuel shortages and severe electricity rationing. The Lebanese government partially lifted the subsidies for fuel at the end of August, and the prices skyrocketed. That was just the beginning: the partial subsidies are to be enforced until the end of September, when the executive and the central bank will completely drop the aid and prices are expected to explode.

But fuel remains scarce in September, causing the country’s electricity provider that uses fossil fuel to generate power to ration or, in some areas, to stop providing any power to consumers, while most institutions and private consumers rely on private generators that run on Diesel fuel.

Claire Said, director of the College Notre Dame des freres Furn El Chebbak, told NOW they could only provide fuel for the four hours they were open once a week, to help parents with the registration process.

In some cases, schools have closed their doors indefinitely and stopped the registration process until they could buy enough fuel.

“The ministry wants to start the year under unrealistic conditions. We don’t have access to fuel nor to electricity so we’re trying to reach out to NGOs to provide some,” director of the Burj Al Barajneh’s first public school for boys, Rima Ahmad Reda, told NOW.

Not surprisingly, staffing has also become a serious issue within the educational sector. Schools face teaching staff exodus, as wages have become unsustainably low, while public school teachers are continuously threatening a strike.

Alice, 25, who spoke on condition of anonymity, said she had to postpone the beginning of her master’s degree in France due to delays in her current university exams. In the meantime, she decided to teach English at an elementary school.

Alice’s school was set to open in early September, however, there was little to no communication from the administration regarding this matter. The young teacher said she was expected to teach nine classes, organize cultural trips and give art lessons.

Alice also stated that many of the qualified teachers at the school have either found better opportunities abroad or in better-paying schools. The school was also forced to make budget cuts and therefore hired non-experienced teachers for lower wages.

“The school is really taking advantage of the situation. They’re hiring one teacher to do the job of two, they know we’re desperate and we need the money so we won’t say no,” she said.

“They hired a big number of us part-time although we would be working more or less full time and they only pay us around 1,150,000 LBP (approximately US$55 calculated at the market exchange rate), which is nothing at all in today’s economy,” she said.

“They hired a big number of us part-time although we would be working more or less full time and they only pay us around 1,150,000 LBP (approximately US$55 calculated at the market exchange rate), which is nothing at all in today’s economy.”
Alice, part-time English teacher

Universities, although they began classes in person at the beginning of September, are also struggling with fuel shortages and staff leaving the country. The most affected has been  Lebanon’s state university. Some students took to social media to complain that they feared the Lebanese University was so underfunded and so many professors had left that it would not open its doors in the fall semester of 2021.

“The salary of our professors barely suffices for them to fill up gas. So they’ve been getting offers from abroad and so far, they have fought the temptation to leave but I’m not sure for how long they will be able to hold on,” Ayyoub told NOW.

He said that being the only public university in the country, with students unable to afford fees at private universities, the Lebanese University expected an increase in the number of students from 87,000 to 93,000 students this year.

Reda also explained that public schools faced the risk of a new teachers’ strike in addition to the exodus.  She said she relied on the Ministry of Education to help them fill the gap caused by teachers leaving the country to work abroad. No help has been offered yet on that front, she said.

This may force educational institutions to rely more and more on charities to obtain fuel, especially for schools in marginalized and impoverished communities and aid money to pay teachers, she stressed.