As Lebanon’s ongoing economic crisis continues to worsen with no end in sight, analysts say that the country’s security situation is only going to deteriorate even further as its population become increasingly desperate and the resources of its security forces are diminished. 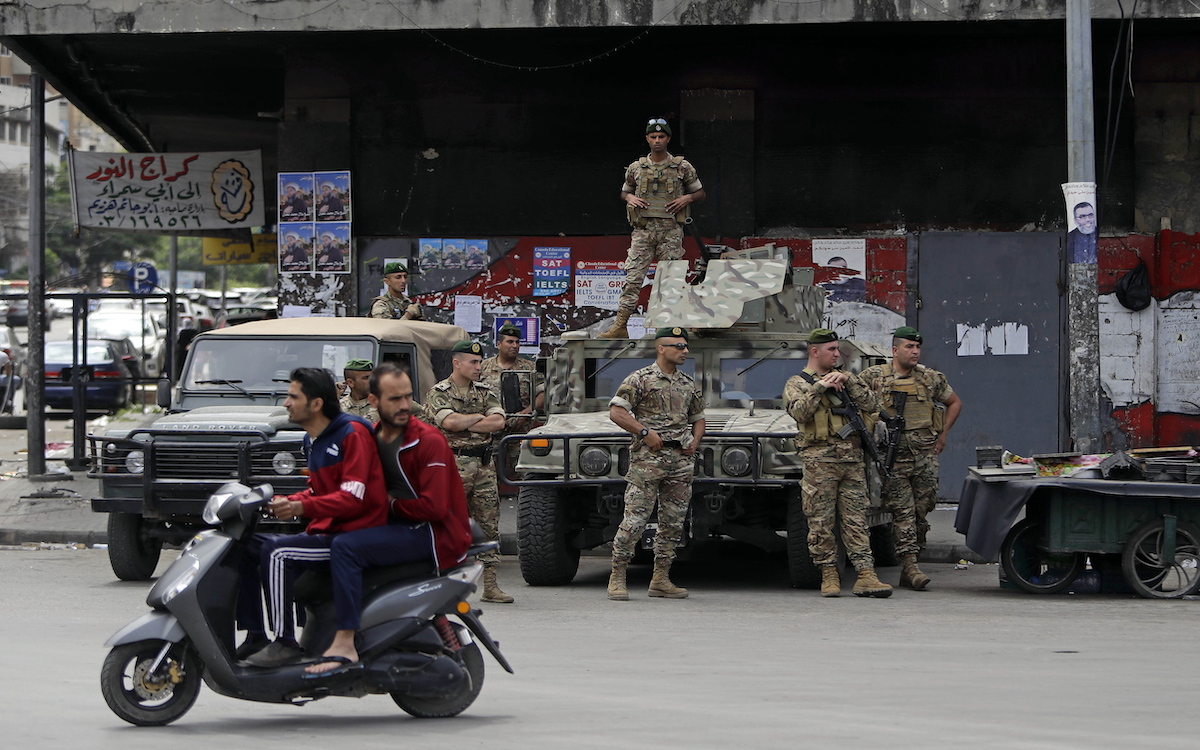 Men ride a scooter as Lebanese security forces deploy at Nur Square on the southern entrance of the northern port city of Tripoli during the parliamentary election, on May 15, 2022. Lebanon voted in its first election since multiple crises dragged it to the brink of failed statehood, with the ruling elite expected to comfortably weather public anger. The parliamentary election is a first test for opposition movements spawned by an unprecedented anti-establishment uprising in 2019 that briefly raised hopes of regime change in Lebanon. Photo: Ibrahim Chalhoub, AFP.

The sound of shooting filled the warm, humid, evening air, echoing throughout the densely-packed streets of Tripoli as four men walked into a phone shop in Tal Square and opened fire.

The shop owner, Mahmoud Ali Khader, and two others working in the shop, his brothers Mohammed and Omar al-Hosni, were killed in the shooting, along with one of the gunmen.

Another of the shooters was later arrested by Lebanon’s security forces.

Reports stated that the shooting was the result of a personal dispute.

A little over a week later, the army raided homes in the Tripoli neighborhood of Abu Samra and arrested several wanted individuals, unrelated to the shooting in Tal.

The shooting and raids are symptoms of a deteriorating security situation that Lebanon has started to see as the worsening economic crisis nears the three-year mark, with the country’s politicians still failing to enact any countermeasures or reforms to begin pulling the country out of the economic collapse.

“I think all over the country we have a deterioration in security. This is manifesting itself in clashes, from Tripoli, Tayyouneh in Beirut, to the southern suburbs and the Bekaa valley,” Hage Ali told NOW.

Mohanad Hage Ali, a senior fellow at the Carnegie Middle East Center in Beirut, is not surprised about the worsening security situation, citing clashes in Khreibeh, a town east of Baalbek, as further example of how nearly three years of economic collapse is breeding instability in the country.

“I think all over the country we have a deterioration in security. This is manifesting itself in clashes, from Tripoli, Tayyouneh in Beirut, to the southern suburbs and the Bekaa valley,” Hage Ali told NOW.

“The murders and robberies are all across the country, and the recent series of bank hostage-taking in return for deposits signals the rising difficulty of delivering security in a country with an imminent social implosion,” he continued.

The security situation has been shaky long before the onset of the economic crisis.

For years, smugglers have moved weapons, drugs, and everyday goods across Lebanon’s borders.

When the economic crisis began and the government began to lift subsidies, fuel and medicine were added to the list of smuggled products.

However, thefts, shootings, and clashes are on the rise, as more and more everyday people become increasingly desperate to make ends meet, leading to sometimes deadly confrontations.

The banks’ imposition of informal capital controls on deposits has led some to take hostages at various branches throughout the country in order to gain access to their money, oftentimes due to a desperate need to pay medical bills for their ailing loved ones.

According to Hage Ali, this escalation is only likely to continue as the economic crisis deepens, and the country’s politicians continue to fail to implement any reforms that might relieve some of the pressure on Lebanon’s population.

“There has been a steady growth in these incidents and this is poised to continue, as the contributing factors continue to exacerbate,” Hage Ali stated. “As the Lebanese Lira continues to lose value every week, and the security forces are forced to look elsewhere for a source of living, their ability to maintain order in the country will diminish. Basically, this is where more crime is meeting less security.”

This escalation is not lost on many in Lebanon, in particular, the banks who have said that they will remain closed indefinitely until their security needs are met after around eight different banks around the country were held up on the same day.

“If they had more funding, this would go a long way. On another note, the judiciary needs to reassume its responsibilities, as their strikes are impacting the police work.”

After a weeklong closure, the Lebanese Association of Banks announced that they would reopen on Monday, September 26, albeit in a limited capacity and with the same restrictions in place.

The worsening security situation presents a unique challenge for Lebanon’s security forces who are already struggling due to the economic crisis, which has seen their resources dwindle and the salaries of those it employs slashed.

“One could note the rise in the frequency of prison breaks which shows the inability of the ISF to perform its duties with diminished resources and nearly zero pay for its personnel,” Hage Ali explained. “If they had more funding, this would go a long way. On another note, the judiciary needs to reassume its responsibilities, as their strikes are impacting the police work.”

According to Misbah Ahdab, a former MP for Tripoli, the Lebanese state is still able to maintain order when it wants to, noting that when the army was deployed for the last several nights in Tripoli, no one was killed in any shootings or clashes.

However, Ahdab argued that as the situation gets worse, the security forces will become increasingly unable to contend with the situation, creating openings for neighborhoods to form their own local militias to enforce security in the area.

“Until now, the task has been given to the official forces but, because of the meltdown that is happening and because of the shrinking of the [security forces’] salaries,” Ahdab told NOW. “I think we will get to the point where it will not be done by the legitimate militaries. So lots of paramilitary groups will start emerging.”

Both Hage Ali and Ahdab say that the best way to tackle the growing security problem would be for the government to pass and implement reforms that work to pull Lebanon out of the ongoing crisis. But it is a matter of political will wether the country’s politicians, who have been accused of corruption and using the system to their own benefit for decades, can come around to finally passing these desperately needed measures.

In most other countries, when the economy begins to sway, its politicians would be quick to take action to prevent any further destabilization and to begin economic recovery as soon as possible.

This has not been the case in Lebanon.

For nearly three years, the Lebanese government has failed to take any action to stem the tide of economic collapse and bring about any sort of recovery.

Even after striking a staff-level agreement with the International Monetary Fund (IMF), the government has not implemented any of the necessary reforms that would open up several billion dollars in desperately needed funding to start putting Lebanon on track to recovery.

This has led to criticism by the IMF for the slow speed at which the government has worked to pass the agreed-upon reforms.

While Lebanon’s caretaker economy minister, Amin Salam, has stated that Lebanon is aiming to pass these reforms in October, things have not been off to a good start, with talks in Parliament having been postponed when a quorum was not met after opposition MPs, members of a Christian bloc and others walked out of what the lawmakers called a “chaotic” session that was “unconstitutional.”

The Speaker of Parliament, Nabih Berri, scheduled the next session for September 26 after Prime Minister-designate Najib Mikati has returned from attending the funeral of Queen Elizabeth II in England and the United Nations General Assembly in New York.

Ahdab is not optimistic about the possibility of the government finally getting its act together, saying that after nearly three years, they still do not have any semblance of a plan on how to move forward. Despite this, the international community, particularly France, continues to believe that the current political establishment is capable of change.

“It’s been three years that there has been this meltdown in Lebanon and nobody has taken any measures in order to stop it,” the former MP stated. “No one has a rescue plan on how to step out of the mess we’re in. This is what needs to be done. Unfortunately, until now, the international community behind Mr. Macron has been supporting the corrupt politicians here and, of course, you can’t ask Madame Claude to fight prostitution for instance. We’re not getting anywhere.”

Ahdab added that although it is the international community that is requiring these reforms in order to release the billions in aid, Lebanon as a country desperately needs to see these changes happen, as a continuation of the status quo will spell disaster.

Hage Ali is slightly more cautiously optimistic about the possibility of the reforms required by the IMF being passed by the government, pointing to the possible agreement with Israel over the disputed maritime borders as something that could give the politicians the momentum required to enact these changes.

Until these reforms are passed and the economic situation in Lebanon begins to improve, the security of the country is likely to continue devolving, making the people, according to Ahdab, the ones who will continue “paying the price” for their politicians’ inaction.