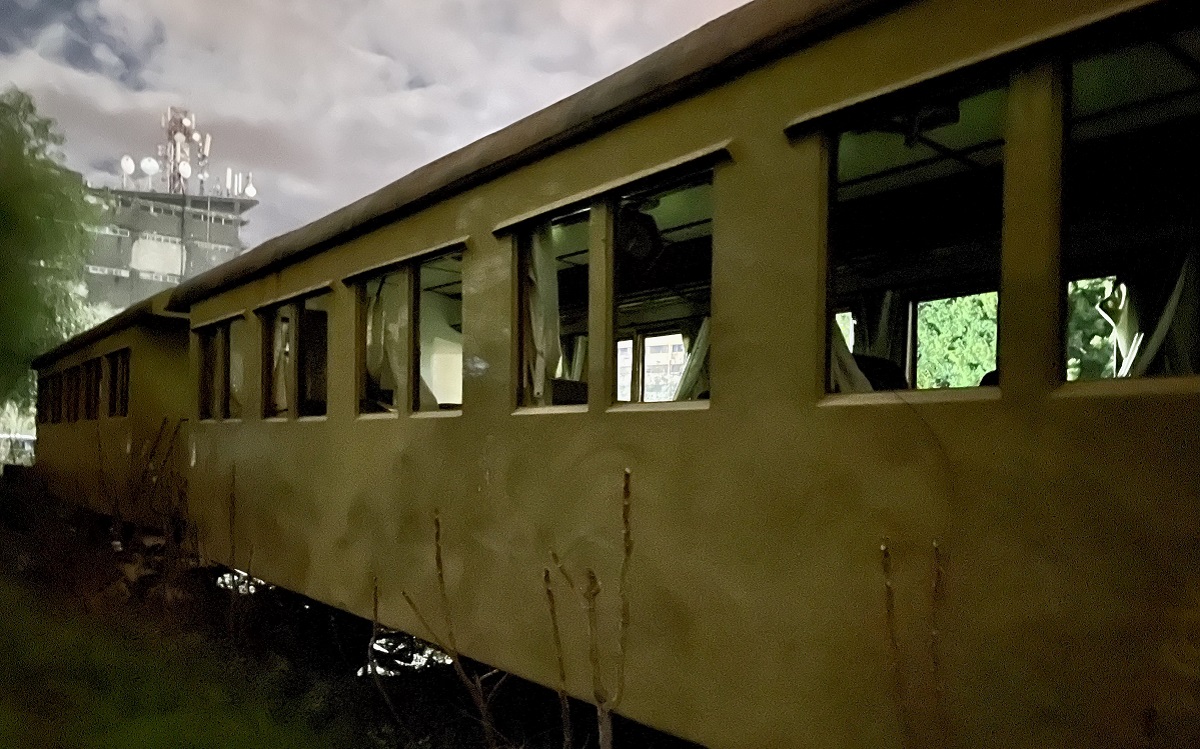 "A second carriage was locked, a gutted interior with a floor that was cracked, exposed to the ground below. " Photo: Courtesy of Ronnie Chatah.

I find myself when this destroyed city speaks to me.

And it prefers talking at night.

It is all about timing, with a full moon that offers just enough dimmed light to let you think you know where you are going.

I was accompanied by a friend – more like a partner in crime – who will read this and will therefore remain nameless. Someone equally attached to this city, who was having a bad night and called me just before midnight in need of company and advice.

We met at the end of Mar Mikhael, where the old Jisr el Hadeed met its fate two years ago after a truck slammed into the bridge’s limited height, dislodging it to collapse. We wandered from there, crossing over elevated tracks that still appear where cars cannot park, despite all valiant attempts, and walked adjacent to the transportation ministry’s repairs warehouse turned bus cemetery. Within minutes, we found ourselves at the entrance to the old train station.

I am lucky – if that is the right word – to have one particular memory of a highway traffic jam. The summer of 1991, on a weekend drive from Beirut to Tripoli. And on our way back, somewhere between Byblos and Tabarja (I cannot pinpoint where), what looked like a fading green carriage with several wagons briefly interrupting the Mediterranean, slowly passing us by the pavement’s edge before it left our elevated view to join the old coastal road below.

I made nothing of it at the time. Neither did anyone else in the car, nor the other commuters within arms’ reach, packed in multiple lanes never imagined by engineers, windows opened thanks to air conditioning not working, consuming car exhaust. Horns honking to no avail, the traffic remaining at a standstill.

It must have been around 1am. I had stood at this spot many times, day and night, simply to get a glimpse of a station I knew from photos. The carriages visible, long abandoned, left along disused rail. The guards that monitor the expansive stretch regularly informed me an ‘ezen’ was required to get in. Where I could get that type of permission was beyond me. But on that evening, they looked at us and without hesitation, they let us in.

No one cared. No one watched.

It took us a moment to realize they thought we were heading to Seif, a nightclub that uses sections of the station for terrible outdoor music in the summer and less atrocious indoor sets in the winter.

And, of course, valet parking.

These trains eventually ran once a week, on Sundays only, from 1991 to 1993. Dora to Byblos and back. Qitar as-Salam – The Peace Train – that I briefly caught as a ten-year-old, passing through traffic.

We headed along the pavement that leads to Seif’s makeshift parking lot. And from there, now entirely alone, we made our way to the first of several parked passenger carriages.

Physical risks, aside, and the real prospect of getting caught notwithstanding, we entered them.

In the first carriage, wooden chairs and tables were destroyed, blown to pieces from the port blast.

A second carriage was locked, a gutted interior with a floor that was cracked, exposed to the ground below.

And a third carriage from the post-civil war years, left as a memorial of sorts. I had read about it appearing in Seif’s predecessor, Train Station, alongside older locomotive steam engines fired up for late-night entertainment.

Curtains were flapping to wind gusts through hollowed windows, brushing against seats still attached. Luggage railings were lodged over, with electrical outlets dangling from the ceiling. With enough imagination, the carriage could be en route to its next destination.

From there, we walked along overgrown grass mixed in mud, tripping over hidden rails. Steel that defies wear and tear and still appears in emptier patches along the coast and the old Damascus road. Wetness began seeping into our shoes as we reached the platform and main hall.

A Paul Garnier clock still juts out of the wall, frozen at 7:08, an hour ahead of the port blast’s permanence. The entrances to the platform are locked, but rooms within are visibly used. Windows had been replaced, and stacked shelves of packed folders lined the walls inside. Even a posted sign from December 2021 notes hours of operation for an office in a hall without passengers. A reminder that an annual budget persists for a railway no longer functioning.

Behind the platform stands a narrow building with exposed entrances that look like blown out offices. We walked over shattered glass and broken furniture, and delicately opened closets thrown against rusted metal drawers. Inside are stacks of feasibility studies from 1995 on how to redevelop the rail network, and surrounded by debris, wooden-framed photos of trains running in the early 1990s. One of them, its cover reflecting through moonlight, of what resembles the green carriage I remembered from childhood.

A Paul Garnier clock still juts out of the wall, frozen at 7:08, an hour ahead of the port blast’s permanence.

I used my jacket sleeve to wipe off a thick coat of dust, turned my iPhone flashlight on and saw the details that bridged personal and collective memory. A commuter train, with a CEL logo in front – ‘Chemin de fer de l’Etat Libanais’, Lebanon’s state-owned railway. Technically still running. The train, itself, a Polish diesel locomotive, from a government purchase made in 1977 despite the railway’s disuse during the civil war. These trains eventually ran once a week, on Sundays only, from 1991 to 1993. Dora to Byblos and back. Qitar as-Salam – The Peace Train – that I briefly caught as a ten-year-old, passing through traffic.

Thirty-two years later, music outside diminishing and Seif closing its doors, we heard voices approaching as valet drivers began entering cars set to depart the train station. We made our own exit by foot, and parted ways in Mar Mikhael.

Temporary respite. Uncertainty struggling for answers. Daydreams that flood the night, looking backwards rather than ahead. With hopelessness on one end and romance on the other, searching for places damaged, yet intact, holding their breath and mine.

Navigating the present. Locked in memory, and stuck in time.