Sweeping up the trauma

Farrah Akbik follows the journey of Lebanese Londoner Sally Souraya as she grapples with the uncanny trauma of being far away while her hometown falls apart. 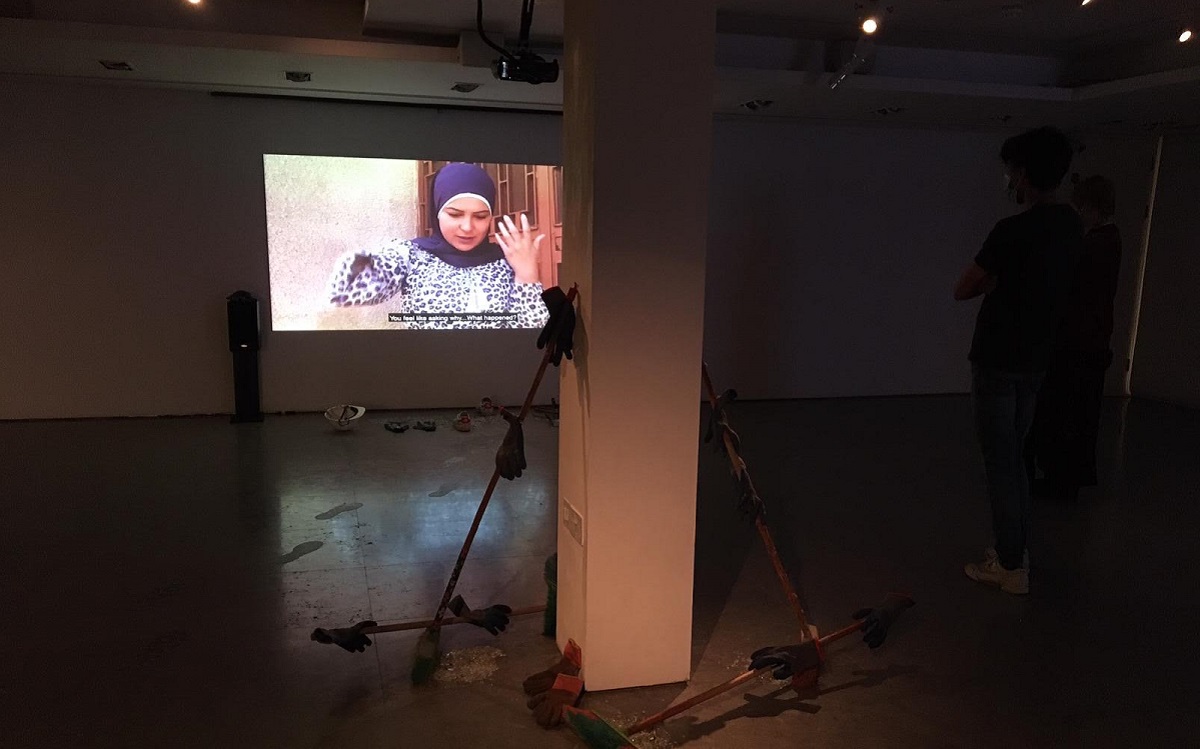 The afternoon of the 4th of August 2020 should have been like any other for Sally Souraya.  A non-descript, pandemic work from home kind of afternoon at her makeshift office in her North London flat. Until a message popped up on her phone asking whether her parents were ok.

‘What do you mean are they ok?’

Soon, social media contextualised the question. Sally paced the space of her office, circumnavigating her thoughts, trying to process, trying to comprehend the enormity of the events unravelling on the ground thousands of kilometres away.  She felt that Middle Eastern urge to go out onto the streets as if from there she would be able to see the destruction with her own eyes, to see the smoke rising, the people rushing, the sirens blaring, the helicopters circling, the glass crunching beneath frantic footsteps.

But nothing. Here the glass was in its rightful place, people were safe, the traffic was paced, the skies silent and clear. Sam, her husband, was at work, there was no one to turn to. A sense of isolation from the reality of her loved ones so far away, overwhelmed her.

Phone calls, messages, social media feeds, none of this was tangible. The distance between North London and Lebanon was a source of discontent and a festering frustration for a woman that needed to touch the ground, to run her fingers across the tonnes of glass that now lay shattered at Beirut’s feet.

Declared one of the most powerful non-nuclear explosions recorded in history, the blast ricocheted across the region and was even heard in Cyprus. Ammonium nitrate, 2,750 tonnes to be precise, stored for years in a warehouse on the capital city’s port. Over 200 people perished, thousands of injuries, approximately 300,000 left homeless.  The Chinese whisper of conspiracy theories began almost instantly as to who was to blame. We still await answers.

Lost amongst those surrounding her, in that they couldn’t fully fathom her feelings of displacement from the tragedy, a survivor’s guilt began to take hold. She felt the need to stand in solidarity with her country and people.

If only she could sweep up the glass.

Sweeping through the shock

It was the culmination of watching the clean-up process that brought Sally’s grief to the fore. She decided to process it by taking the act of sweeping and conveying it into a symbolic visual performance.  Yet where would she find shattered glass?  No merchants were willing to sell her any.

Health and Safety, they all cited. Glass would forever have a different meaning to her. Eventually, she was given a sheet of safety glass and shattered it herself. And a month after the explosion on the 4th of September, she took to the streets of London, with a bucket, broom, a dustpan and of course the broken glass. Walking from her North London home to the Lebanese embassy, yet every so often stopping to tip the glass out and then sweep it up, tip it out and sweep it up.

Metaphorically bowing along the way in the act of sweeping, in support of her fellow countrymen and women.  Sweeping away her grief but also symbolically sweeping away the past and the simmering corruption of the ruling factions that had ultimately exploded along with the port.

Lebanon is a country built on a form of confessionalism – dividing up the offices amongst the different religious factions. Territorial, each seeking the advancement of their corner. Every election, like a dance of tango, the same players are merely reshuffled into different positions. Contaminated fuel, power cuts, queues, and even food shortages. It all came to a boil in October 2019. The WhatsApp tax (not making it up – $6 a month) was the nail in the coffin, along with the wildfires of the western mountains that pushed the country’s dilapidated fire brigade to call on the help of Cyprus, Greece and Jordan. Protests had poured out onto the street and the tax was scrapped within hours.

Death. The need to touch. To contextualize. I took sneaky mental notes for my own benefit during the interview. She spoke of trying to obtain remnants of the broken glass from Beirut. Broken glass sent over via DHL…imagine.

Looking back, Sally can place her grief along the pavements of London.  Memories of sweeping in certain streets.  Members of the public, curious and questioning, even stopped to help her sweep up. She swept her grief along for what turned out to be a 4 hour and 20-minute exhibition of personal response but also of raising awareness.  A grief that evolved into an artistic interaction with the people along her route that stopped to share in her performance.

I first interviewed Sally in an open courtyard of a café in Islington, not long after she had finished sweeping her way across London. Here was a woman with two mental health-based master’s degrees. She was more than adequately educated in how to grasp pain and bereavement.

At the time I was trying to wrap my own head around post-war traumas, and everything she was saying made so much sense.

Death. The need to touch. To contextualize. I took sneaky mental notes for my own benefit during the interview. She spoke of trying to obtain remnants of the broken glass from Beirut. Broken glass sent over via DHL…imagine.

I watched her gesticulating hands, Levantine style, emphasize the words coming out of her mouth.  I would send her WhatsApp messages in the still of the night.  Where were you when you heard? How did you feel? What did you do?  Messages traveling across London and then eventually following her to Lebanon in the summer of 2021, one year after the blast.

Back to a broken home

‘It’s hot, there is no electricity most of the time, cars queuing for hours for petrol.’

I could visualise the destroyed port looming in the background, a constant reminder of the cancer-like corruption that pollutes Lebanon’s vessels.

Sally’s exhibition encapsulates her journey, which took her back to her home country to explore the psychological implications of the blast’s aftermath by conversing with people who were actual volunteers on the ground.

‘Farrah, I’m rushing from one interview to the next.  Some are visual, we can see their faces, some voice recorded, some are photographed. Some didn’t want to appear. Some would send voice messages. Some were casual conversations …a back and forth of reflection. Talking.’

She focused on the aspect of the sweeping, the positive, she wasn’t ready to visit the bereaved, the injured, and she didn’t feel able to represent that pain in particular.

‘It made me feel closer to what happened…actually going back and seeing their energy, their will to help. It gave me hope to see that there were people that had the energy to move forward. But at the same time some of my interviews ended with people saying they were seeking a way out, finding opportunities to leave.’

‘What if this happens again?’ They would say.

‘I think the pain they went through, made them realise that they needed to find a place in this world where they were afforded the respect and dignity they deserve.’

Forget about Andrex toilet paper, another friend of mine relayed to me what it means to live amidst shortages and corruption.

Voice Note: Yalla tell me how it is?!

“I felt heavier, coming back to London, bringing brooms, bringing broken glass, bringing all these stories. I felt a responsibility towards these people…that their stories should not be forgotten.”

Let’s just start with the fact that 75 percent of us are unable to sleep because there is no electricity, no generators because there is no diesel to work them, so no ACs, we sleep on the balcony if we have one. But the heat of the sun wakes me early.

So we seek refuge in the offices or the coffee shops in the hope of an AC. Those who have money of course, who can afford to sit in them. There is no water, because it’s not being pumped, due to no power.

We have a 3-hour window. Sporadic hours, so you can’t even plan for them. We rush to fill the water, wash clothes, and wash our bodies. Prices are literally doubling on a weekly basis. Forget about stocking your fridge.

The fridge has lost its purpose, it’s an extra cupboard now. The food just goes off. Even the refrigerated food in the shops is going off. Three-to-four-hour queues in the sun for petrol, you can reach the front only to be told that they have run out. And next week the prices are going up again, as it’s been said that the government will no longer subside it. They are also saying that in a couple of weeks, there will also be gas shortages.

Many of the young Lebanese had swept up their country, placed the brooms to one side, said goodbye and left. Was the sweeping a form of closure as such?

We sweep away as much as we can of past traumas and look to the future. Like being torn from the arms of a lover we flee our countries…you don’t want to leave them but you are forced to. Yet our governments are like tyrannical marriages, we escape in the hope of burying our faces in the chest of democracy.

She finally collected some of the broken glass from Beirut, along with a quantity of the brooms. Brooms that were left to one side, as some of their owners forged futures elsewhere.

“I felt heavier, coming back to London, bringing brooms, bringing broken glass, bringing all these stories. I felt a responsibility towards these people…that their stories should not be forgotten.”

The shards of glass that were painstakingly swept back together as if to form a beautiful mosaic that is Lebanon’s future. A future of hope.

Farrah Akbik is a British-Syrian writer who writes to raise awareness of issues pertinent to the Levant. She is currently doing her Masters in Creative Writing in London.