The enemy of my enemy 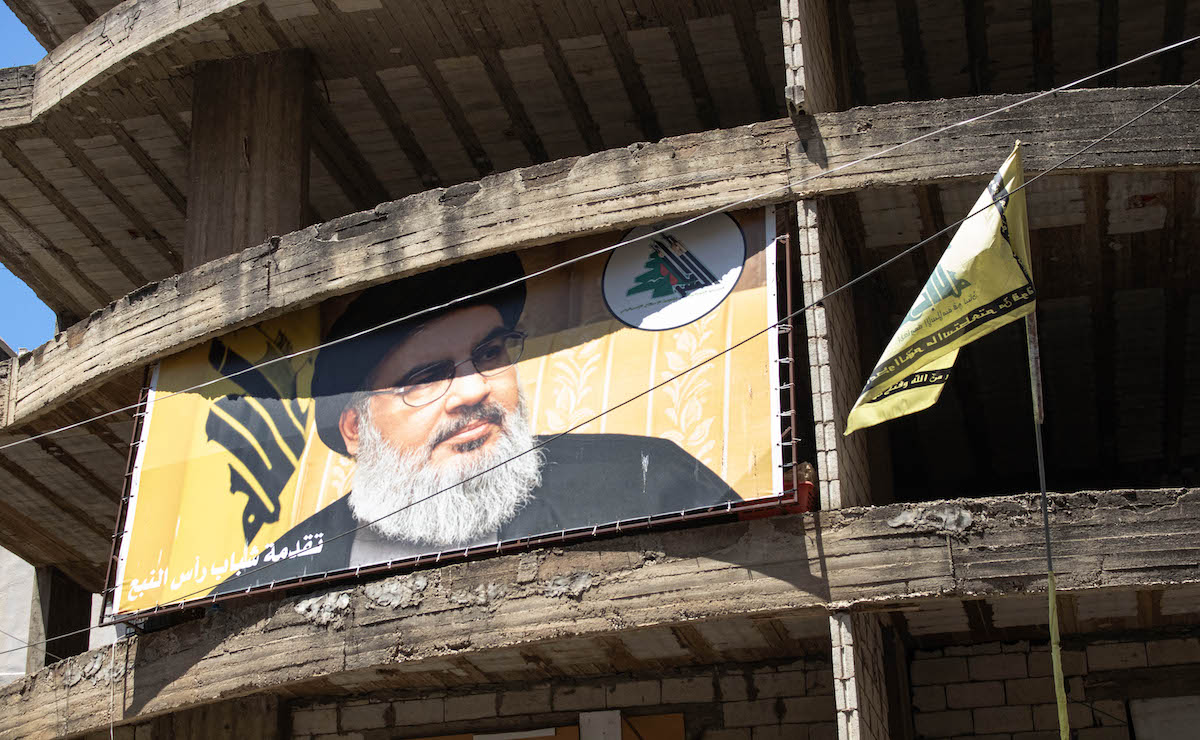 Hezbollah’s Secretary-General Hassan Nasrallah smirked at the camera as he discussed on August 18 the recent Taliban victory in Afghanistan in his address to his supporters and Lebanon.

“Following the defeat of US forces in Afghanistan, and after 20 years of occupying this country, with all the strategic and historical significance of this incident (Taliban takeover) and its important repercussions on our region and the world, all eyes in the next few months will be trained on the US occupation in Iraq and Syria,” the Hezbollah leader stated defiantly.

Nasrallah went on to call the US withdrawal from Afghanistan a “historic and humiliating defeat” for the western country.

In addition to his praise for the US pullout of Afghanistan, Nasrallah also stated that Iran would be sending fuel to Lebanon soon in order to address the country’s worsening crisis.

“I say to the Americans and the Israelis that the boat that will sail within hours from Iran is Lebanese territory,” he said, hinting that any actions by the Israelis or Americans would lead to conflict.

All of this was not just words coming from the Hezbollah leader.

In addition to sending fuel to Lebanon, Iran announced that it would restart its fuel exports to Afghanistan at the new Taliban government’s request.

To some analysts, Nasrallah’s reaction of triumph at the Taliban success was not surprising.

Neither was his lack of concern over defying the government when proudly stating that several boats with fuel would be departing from Iran towards Beirut. It has to do with the confidence the US withdrawal from Afghanistan gave Tehran to assert its leadership at a regional level.  It’s a typical example of “the enemy of my enemy is my friend”.

“The Iranian regime wants a destabilized region full of semi-failed states so that it can use them to further its goals basically,” author and Iranian affairs commentator Arash Azizi told NOW. “It can use them as safe havens for its activities as places where it can at the very least avoid the sanctions. The less connected the region is to the international system, the less it has the presence of US and international forces, the better it is for the Iranian regime.”

Letting go of the past

The relationship between the Taliban and Iran has not always been the budding romance that Tehran has been pushing following the Taliban’s return to power in Afghanistan.

In reality, there is a long and bloody history between extremist Sunni group and the regional Shiite power.

In order to solidify the narrative that the Taliban and Iran are good friends now, Tehran has made sure that any public talk in the media is nothing but supportive of the relationship, despite the fact that the Taliban have long targeted the Shiite Hazara minority in Afghanistan and has even killed several Iranian diplomats in the past.

“The propaganda around the Taliban has totally changed,” Azizi explained. “It is a force that killed nine Iranian diplomats in 1998 in a very gruesome murder in the Iranian consulate in Mazar-e-Sharif and some of these were IRGC people. It is pretty gruesome to see this shift in propaganda by the IRGC.”

According to Borzou Daragahi, a nonresident fellow at the Atlantic Council, Iran was completely fine with the Ashraf Ghani government being in place despite its links to the US. Daragahi explained that Iran was actually supporting both the Taliban and the Ghani government to ensure that no matter who came out on top, they would be friendly with Iran.

“They were absolutely hedging their bets,” Daragahi told NOW. “I’m sure that they would have preferred the government of Ashraf Ghani. I’m sure they would have preferred a government that was elevating Iran’s Shiite and was literally called the Islamic Republic of Afghanistan even if it was not modeled on the Islamic Republic of Iran. But the Taliban won so now we have to make do with what we got. And so that means telling the media to hush up about Taliban atrocities.”

Taliban’s effortless slip back into power as the US withdrew from the country was also too good of an image for the Iranian regime to pass up.

“It is in line with Iran’s long-term strategic goal of exiting US forces from the region and the Taliban are seen as a force that was able to do that and achieve the fall of a US-friendly government in Kabul and they’re celebrating that,” Azizi stated.

But justifying the relationship is not easy given the atrocities that the Taliban have carried out against the Hazara community and Iran itself.

Azizi argues that justifying its ever-changing support for different groups is something that Iran has become increasingly good at.

“It’s how it works. You justify things,” he said. “Iran supported Armenia, a Christian country, in its war with Azerbaijan, a Muslim country which shares the ethnicity of many of Iranians. Iran has justified supporting the brutal repression of the Muslim Brotherhood in the early 80s by the Assad regime and, of course, has continued to support the Assad regime, a secular dictator against Islamists.”

“The less connected the region is to the international system, the less it has the presence of US and international forces, the better it is for the Iranian regime.”
Arash Azizi

For the Iranian regime, the legitimization of their actions happens through the media by ascertaining that the journalists avoid certain words and phrases that might paint the Taliban in a negative light.

“Iranian state TV correspondents would talk about how Kabul is super safe and nothing bad has happened to anyone,” Azizi explained. “The Ministry of Culture in Iran actually sent guidelines to all of the media saying that they should avoid using terms like ‘brutal’ for the Taliban.”

Azizi added that the narrative of a new Taliban has been an important one that is being pushed throughout Iranian media as a way to affirm its partnership with the new rulers of Afghanistan.

Despite their best efforts to make nice with the Taliban in celebration of America’s defeat, Daragahi believes that Tehran may still lose out in the end.

“It’s pathetic in a way because, yeah, America is defeated but all of these millions of Afghan refugees are going to spill into your country. No more control over the heroin trade. No more monitoring of the Islamic State province of Khorasan. No more serious fighting against them on the part of the US and the Afghan government. It’s a pathetic propaganda victory because, strategically, it’s not looking so great for Iran even if they have decent contacts with the Taliban.”

“The Afghan government was no threat. And, guess what, the Taliban potentially is and it has proven that repeatedly,” Daragahi later added.

While Iran’s venture into Afghanistan may prove risky for its regional posturing, Tehran recently made another safer bet by sending two ships filled with fuel to Lebanon as the Mediterranean country faces a worsening fuel crisis in lieu of its economic collapse.

From Tehran with strings attached

It was on June 25 that Nasrallah first announced that Iran would be willing to send fuel to Lebanon to alleviate the crisis that the country is facing.

On top of that, Iran would accept lira as payment, as the economic crisis has dried out the dollars in the country and made it extremely difficult for Lebanon to continue subsidizing fuel imports.

For a few days, that was all the talk in Lebanon, and then it stopped.

There were no updates for nearly two months until Nasrallah confirmed in a speech on August 19 that Iran was indeed sending the fuel.

There were conflicting reports as to who exactly was paying for the fuel.

Some said that the Lebanese state would be paying for it in lira. Others claimed that Shiite businessmen were footing the bill.

No matter who is paying for the fuel, Iran knows that it is a great way to boost its image.

“I can only see it as public diplomacy,” Daragahi said. “I’m sure that they’ll market it as a humanitarian gesture to prevent Lebanon from collapsing. But maybe also they see an opportunity there in the US and Saudi Arabia leaving Lebanon out to dry and look for a very low investment of fuel.”

This also allows for Iran to spread its influence in Lebanon through its bolstering of Hezbollah’s image.

Iranians are so sanctioned at this point, what [is the US] going to do? Sanction some poor guy in Dahiyeh who takes fuel at the gas station that’s sourced to Iran? I don’t think so. Even better if they sanction them. It just makes the Americans look that much more vindictive.
Borzou Daragahi, Atlantic Council

Hezbollah’s arranging of the import of Iranian fuel reinforces the notion that the Party of God as a lone organization can take care of the state better than the government, once again undermining its authority.

“Hezbollah is very comfortable in this position of ‘We’re beyond politics. Let the Joumblatts and Hariris and Berris fight it out. We’re looking out for Lebanon’s larger interests while these guys are squabbling over the scraps,'” Daragahi stated. “So I think that that is an attempt to bolster them in that image. Coming in and saving Lebanon at this moment.”

In Iran, the decision to send fuel to Lebanon when most Iranians are struggling to get their basic needs met has come across negatively. The regime, however, believes that it can handle any domestic fallout or opposition.

“It is coming across negatively to people on social media,” Daragahi said. “Iran remains a strict authoritarian state. No criticism voiced in broadcast media. No criticism in the print media. The regime likely figures it can easily handle any fallout.”

These actions by Iran have also put the US in a difficult position.

While it opposes the importing of Iranian fuel and has severely sanctioned Iran, the US cannot sanction Lebanon or anyone that uses the fuel that is brought in without looking insensitive to Lebanon’s situation.

“Iranians are so sanctioned at this point, what [is the US] going to do,” Daragahi asked sarcastically. “Sanction some poor guy in Dahiyeh who takes fuel at the gas station that’s sourced to Iran? I don’t think so. Even better if they sanction them. It just makes the Americans look that much more vindictive.”

This has forced the US, with the help of Egypt, to indirectly counter Iran by appealing to Syria to let Jordan supply power to Lebanon through their country, something that Syria has constantly refused.

Because the US cannot directly come after Iran or Hezbollah due to the negative image it would make of the US not letting a crisis-hit country receive help, it could prove beneficial to Lebanon who has struggled to find international support due to calls by the international community for Lebanon’s politicians to first institute reforms.

“All of a sudden, the US was like ‘Well we’re going to send fuel too,'” Daragahi speculated. “Maybe there’s a little competition heating up which could be good for Lebanon. The Iranians, Americans and Saudis [may all be]rushing to outdo each other in terms of charitable deeds instead of leaving Lebanon out to dry, he said.