Iran may look to gain more regional influence by selling Lebanon fuel in exchange for devalued Lebanese pounds, but it is also a short-term solution to the country’s gas crisis, analysts say. 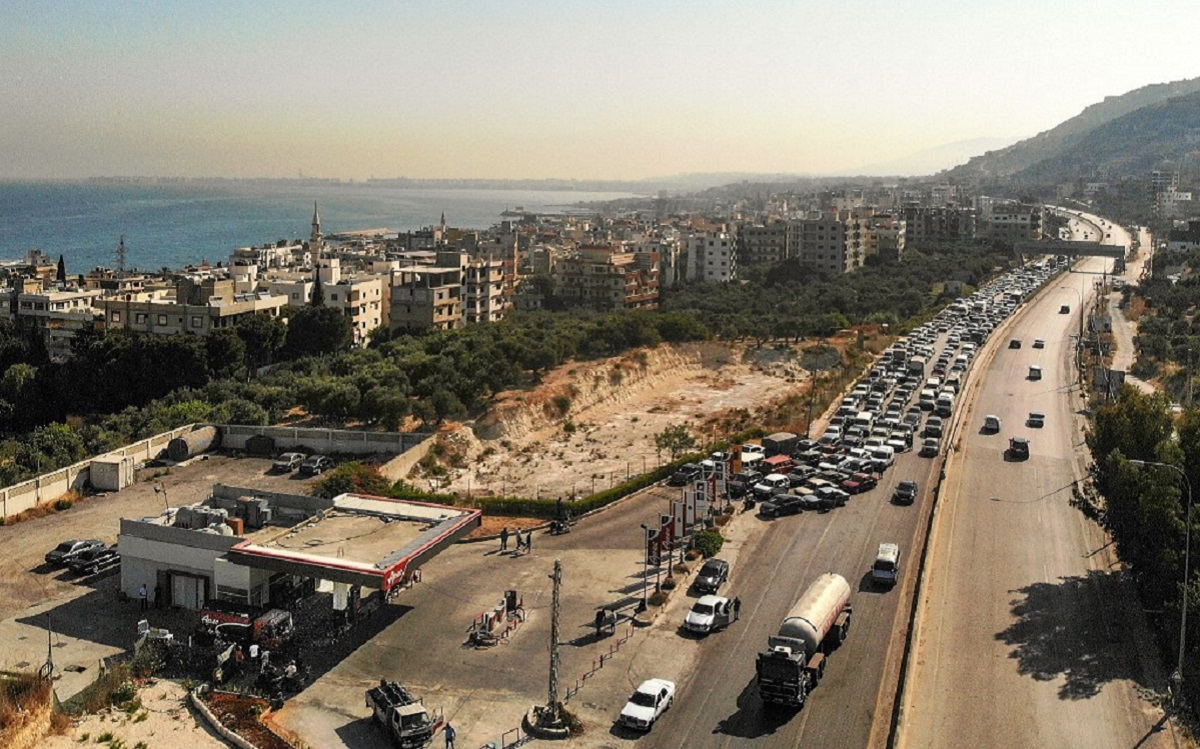 Line at a petrol station queueing-up for fuel as traffic flows through on the Tripoli-Beirut highway at the coastal city of Qalamun in northern Lebanon on July 1, 2021 amidst severe fuel shortages. Photo: Ibrahim Chalhoub, AFP

The line of cars continued down the road for as long as the eye could see.

Cars bumper to bumper with little space in between, blocking off half of the road, causing traffic jams during the day.

It was the evening and the gas station had long been closed, but the owners of these vehicles abandoned their cars in the line so that they would not lose their spot the following day.

Many of them had waited all day to get the increasingly scarce commodity and now had to wait for another.

There was even a small coffee stand at the station for people to get kabse, a small cup of coffee, while they waited.

Where the Lebanese people see a daily struggle to survive an economic crisis that has seen prices skyrocket and the local currency devalue over 10 times in two years, Iran sees an opportunity to further expand its regional influence in a country where its proxy Hezbollah already dominates the country’s political scene.

“Hezbollah is attempting to increase its standing in Lebanon as it’s always one to do and Iran is a perennial backer of Hezbollah so to a certain degree you have [Hassan] Nasrallah grandstanding,” Justin Dargin, a Middle East energy expert at Oxford, told NOW. “He’s saying that he will come to the rescue given the constant failings of the Lebanese government and the inability to secure the basic welfare of the Lebanese citizens.”

During a June 25 speech, Hezbollah’s Secretary-General Sayyed Hassan Nasrallah reiterated a pledge that Iran would be ready to bring fuel to Lebanon to alleviate the fuel crisis that has swept the country in recent months.

In fact, while this would help, it would only be a temporary solution, mainly because the core of the problem is not the lack of fuel, but the lack of currency to buy it.

As Lebanon’s economic crisis has continued to worsen, it has become increasingly difficult for the country to import fuel for gas stations and diesel to keep the country’s lights on.

During a June 8 speech, Nasrallah pledged to the Lebanese people that if the crisis continued, then Iran would sell fuel to Lebanon even at the risk of retaliatory action by the US.

A major draw to importing fuel from Iran is that the regional power has stated that they would be willing to take Lebanese lira as payment for the desperately needed substance, rather than forcing Lebanon to further deplete its foreign reserves that are already quickly dwindling.

“Others would not take Lebanese lira and Lebanon doesn’t have the foreign reserves to import fuel anymore,” Natasha Hall, a senior fellow at the Center for Strategic and International Studies, told NOW. “People are speculating as to why they would take Lebanese lira. Is it because they could pay Hezbollah with that currency? Given the plummeting value of the currency, there are clearly other factors at play.”

With the lira plummeting in value on an almost daily basis, now sitting at over 17,000 to $1, should Iran agree to accept the payment in lira, it would cause Iran to take an economic hit. But that is something that Dargin says Iran is not concerned about.

“Others would not take Lebanese lira and Lebanon doesn’t have the foreign reserves to import fuel anymore.”
Natasha Hall, Center for Strategic and International Studies.

“[Iran] has propped up the Syrian regime for a long time so it seems like Iran doesn’t have a problem supporting its allies in a time of need even at an economic cost to them,” he explained. “Within the last few months, there have been about five million barrels of oil that have been shipped to Syria. Of course, Syria has certain financial difficulties as well, probably much worse than Lebanon. Iran has stepped up to various allies and shipped them fuel when they needed to.”

Lebanon’s Ministry of Energy has denied that they are going to buy fuel from Iran, stating that the ministry has not received any requests for a “permit, either from an official or private party, to import fuel from Iran.”

The Lebanese government, however, may not have a choice as they struggle to pay for an adequate amount of fuel imports, leading to the widespread power cuts and the closure of a majority of Lebanon’s gas stations. Because of this, Lebanon may be forced to start buying fuel from Iran, further strengthening their own, and thus Hezbollah’s, influence in the country.

“The Lebanese government would have egg on its face if Iranian fuel were to go there when it explicitly stated that it doesn’t want Iranian oil imports,” Dargin said.

“But the people do need fuel and if they don’t get it, there could be widespread civil unrest which Lebanon is no stranger to. Already at the gas stations, there is already gunplay and brawls and so on and so forth.”

While the importing of Iranian fuel would help alleviate some of Lebanon’s fuel woes, it would only be a temporary solution as Lebanon would have to arrange a longer-term deal with Iran to keep the oil flowing and it would not address the larger issues of corruption and the other issues facing the country’s energy sector.

“It’s a Band-Aid solution,” Dargin explained. “They need fuel right now and if the Lebanese government is not able to obtain that then they are going to have to get it from other places and Iran is apparently standing waiting and willing to do so.”

The energy expert added that there is also the issue of the US and Israel’s reaction to  Iran sending oil to Lebanon, contrary to their interests.

Following the announcement that Iran was willing to sell fuel to Lebanon, the US Ambassador to Lebanon Dorothy Shea was quick to speak out against it.

“What Iran is looking for is some kind of satellite state that they can exploit to pursue their agenda,” Shea said. “There are other alternatives to provide fuel and electricity to the Lebanese people. There are much better solutions than turning to Iran.”

In response to the ambassador’s statement, Iran lashed out, saying that Iranian-Lebanese relations were none of the US’ business.

“The arrival of Iranian oil tankers in Beirut is not hinging on the trifles of U.S. Ambassador to Lebanon Dorothy Shea,” the Iranian embassy tweeted. “The ambassador should not interfere in the brotherly relations between the two countries and between the Iranian and Lebanese peoples.”

While the US might publicly oppose Iran selling fuel to Lebanon, the Western superpower may begrudgingly approve of the actions behind closed doors as the US is still trying to court Iran back into the Joint Comprehensive Plan of Action, better known as the Iran nuclear deal, especially as Iran just elected a new hardline president Ebrahim Raisi.

“So far it looks like, in order to entice Iran back to the negotiating table, the Biden administration is giving, more or less, a blind eye to Iranian oil exports at the moment. There hasn’t really been any firm action against importers of Iranian oil,” Dargin stated.

“Behind the scenes, it’s possible that the US could give a green light, not officially, for Iranian fuel imports simply so the Lebanese government doesn’t collapse, which would actually give more power to Hezbollah.”

Hall also agreed that Iran is taking advantage of the situation by putting pressure on the US to allow the fuel imports so that if the US refuses to allow them to sell the fuel, then the US looks like the villain who is not allowing Iran to help Lebanon in its time of need.

“I see Iran, as it has in the past, taking advantage of a fragile state by suggesting that it could save the day if only the US allowed them to, placing the onus for Lebanon’s crisis on traditional Western donors rather than Lebanon’s politicians,” she explained.

It is not just the US that needs to unofficially approve of the sale, however.

Israel, in recent months, has bombed several Iranian ships carrying fuel to Syria, saying that the profits from the fuel sold go towards Iran-funded extremism in the region.

Even if the US does not take any actions against Iran or Lebanon for buying and selling the fuel, the US could give its stamp of approval to Israel to bomb the Iranian fuel ships, thus stopping the transfer in its tracks.

While Israel might want to prevent Iran from selling fuel to Lebanon, Lebanon’s southern neighbor also alternatively has a reason to allow the fuel to be unloaded in order to prevent widespread unrest in Lebanon which would also threaten Israel’s security.

“You could have the US, and even Israel, to kind of allow that to go through to forestall widespread civil unrest to support the propping up of the Lebanese government in this short time period,” Dargin stated.

Even if Iran is able to sell the fuel to Lebanon, it will not address the reforms needed for the energy sector and will only allow for the current issues to continue not too long after.

Hall argues that unless these problems are addressed, then Lebanon will not be out of the woods any time soon.

“The big picture is that Lebanon does have a way out of this crisis if politicians engage in much-needed reforms that have been promised for years,” Hall said.

“Everything else is a stop-gap solution. I would argue that Lebanon has gotten to this point because of stopgaps and it’s time to be more forward-thinking.”