Although Lebanon maintains a reputation as the most liberal country in the Middle East for LGBTQ+ freedoms, recent events show that the community might have to adopt new security measures in the face of governmental and religious threats. 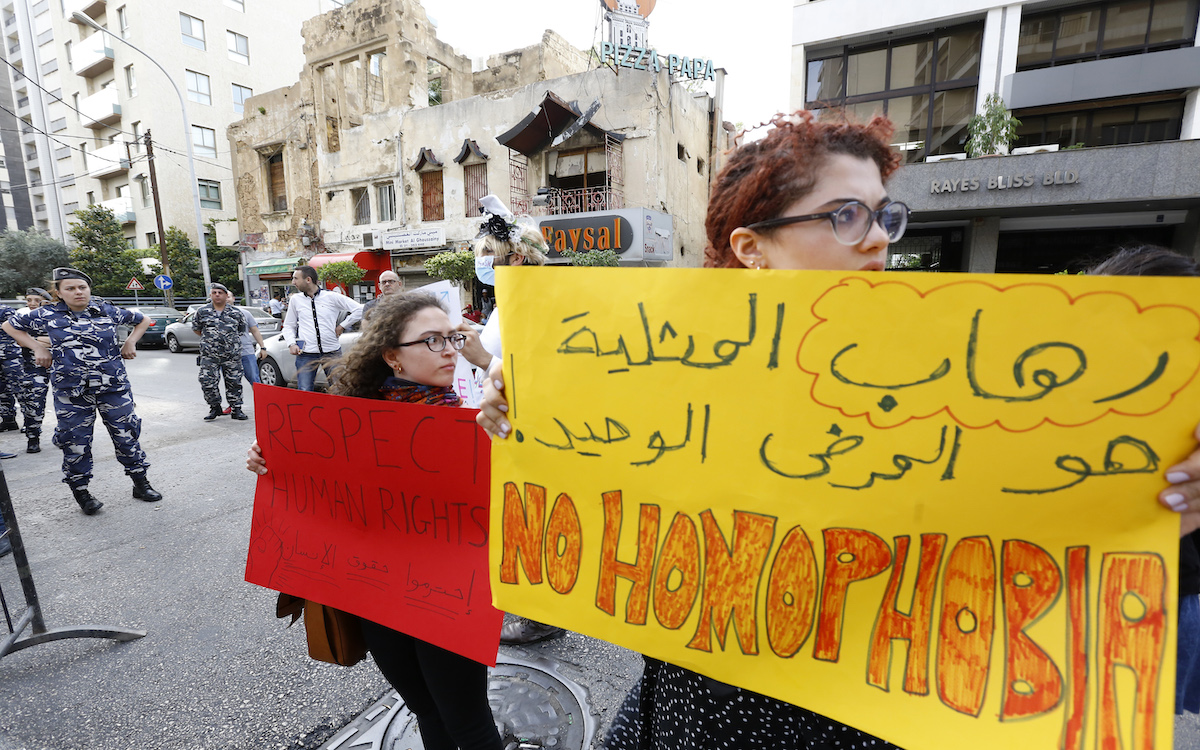 Activists from of the Lebanese LGBT community take part in a protest outside the Hbeish police station in Beirut on May 15, 2016, demanding the release of four transsexual women and calling for the abolishment of article 534 of the Lebanese Penal code, which prohibits having sexual relations that "contradict the laws of nature". Photo: Anwar Amro, AFP

In a country where homosexuality is punishable by law and rejected by the majority of society, LGBTQ+ events play a key role in providing a safe space for Lebanon’s LGBTQ+ community to assert its right to freedom of expression and freedom of assembly, away from homophobic judgment, 34-year-old events planner, Ghida*, told NOW.

However, this changed when Lebanon‘s interior minister, Bassam Mawlawi, ordered the country’s security forces to break up gatherings held by the country’s LGBTQ+ community after facing pressure from religious groups.

“Now the community is uncertain of its safety and has to figure out its own security measures to avoid any escalations from religious or political entities,” Ghida said.

Mawlawi’s decision on June 25 stated that security forces should “take the necessary measures to ban any celebrations, meetings or gatherings aiming to promote this phenomenon and to report the results back.” Homosexuality, according to the minister, constitutes “a violation of the habits and traditions.”

Hours before the minister’s statement was released, the Christian conservative group “Soldiers of God” vandalized a rainbow billboard set up by the LGBTQ+ initiative, Beirut Pride.

Although the organizers of Beirut Pride aimed to symbolize the community’s strength and resilience with their “blooming billboard,” the Soldiers of God saw it as a sign from the devil.

Politicians have been promoting hate speech and inciting violence with no regard to constitutional rights and freedoms or the consequences suffered by the LGBTQ+ community.

This comes amidst rising tensions and the absence of governmental protection, with humanitarian experts and activists believing that the LGBTQ+ community is being scapegoated by the authorities to deter attention from its failures and the lack of reforms.

In 2013, the mayor of Dekwaneh ordered a queer-friendly nightclub to be shut down on charges of  “promoting prostitution, drugs, and homosexuality” with no prior legal notice.

The police then rushed to arrest transgender individuals and men of Syrian origin who were escorted to the municipal headquarters where they were harassed and forced to undress.

The case of Mashrou’ Leila can’t be compared to this year’s ban because the hate was then directed at one group, now it’s directed at a whole community in a very hostile way.

Two months before the October 17 revolution in 2019, the Maronite Catholic Eparchy of Byblos issued a statement calling for the cancellation of a concert by popular Lebanese band Mashrou’ Leila, whose lead singer, Hamed Sinno is openly gay.

With no protection and no way to ensure the safety of the performers or the audience, the performance was eventually called off, with one of the organizers saying “there is no solution because, in the environment where we are living, so many factors played a role.”

A concert was then organized in support of the band and to showcase public rejection of censorship, oppression, and forceful ruling.

But “the case of Mashrou’ Leila can’t be compared to this year’s ban because the hate was then directed at one group, now it’s directed at a whole community in a very hostile way,” Ghida said.

Although civil society groups called for a protest a day after the minister issued his statement, an increase in death threats and calls for counter-demonstrations forced organizations to indefinitely postpone their peaceful march.

Rasha Younes, researcher with the LGBT Rights Program at Human Rights Watch, asserts that the minister’s ban on recent LGBTQ+ events sends a chilling message to LGBTQ+ people, affirming that their government will throw away their fundamental rights in the face of pressure from religious groups.

“The crackdown has no legal basis and contradicts Lebanon’s obligation under international law,” Younes told NOW. “The ban violates the law of non-discrimination, freedoms of assembly, expression and association, which are all protected under the constitution.”

The researcher adds that this sets a dangerous precedent for determining governance according to vague principles and presents the government as an intrusive entity monitoring LGBTQ+ centers and events.

“The responsibility needs to lie primarily on the state to protect constitutional rights. Organizations can band together to support marginalized individuals. However, civil society groups can’t shoulder the government’s responsibility of protecting LGBT people online and offline,” Younes said.

President of the Lebanese Center for Human Rights, Wadih Al Amar, told NOW that the government is feeding homophobic rhetoric to divert the public from its failures.

Statements of support show LGBTQ people that they are not alone and send a clear message to political and religious authorities that their actions are being watched and criticized.

A few days after the ban, the outgoing government released the new telecommunications prices,  payable at the Central Bank’s Sayrafa rate, which currently stands at LL25,200, a staggering increase from the previous prices using the official rate of LL1,500.

In light of the new government formation process, Al Asmar argues that the Minister of Interior’s unlawful decision could be interpreted as an attempt to be reinstated in the upcoming government, evident in a leaked document of the draft line-up allegedly handwritten by Prime Minister-designate Najib Mikati.

“Statements of support show LGBTQ people that they are not alone and send a clear message to political and religious authorities that their actions are being watched and criticized,” Al Asmar said.

Although Al Asmar sees protesting against the government’s attack on the LGBTQ+ community immediately after the circular was issued as a hasty decision, he believes that instead of postponement, it could have been re-shaped into a gathering, a meet-up, or even a conference in a different location.

“Giving bigots a pass sends a message that they can scare us and terrorize us whenever they want. We must stand firm in our decisions and not back down,” Al Asmar said.

Executive director of Helem, a queer rights NGO, Tarek Zeidan told NOW that the protest will happen in collaboration with other civil rights causes such as women’s rights to ensure the presence of a large crowd with more allies.

We’ve done similar events for many years, nothing has changed in the way we promote them or title them. The only changing factor is the state of affairs we live in that made the government use us as a scapegoat.

Helem was one of the organizers of the banned events, but Zeidan contends that their overt participation could not be considered a valid reason to trigger nationwide attacks on the LGBTQ+ community.

“We’ve done similar events for many years, nothing has changed in the way we promote them or title them. The only changing factor is the state of affairs we live in that made the government use us as a scapegoat,” Zeidan said.

“What’s more dangerous is that people are starting to believe the popularized rhetoric claiming we’re working to legalize gay marriage and aim to indoctrinate kids with our gay agenda. The public uproar is unparalleled,” he adds.

On the other hand, the support displayed by allies including political parties, coalitions, labor unions, and others, was equally unparalleled and it sends the message that LGBTQ+ issues are no longer on the periphery, but a central humanitarian cause under the equal rights movement, Zeidan asserts.

From his end, the executive director of humanitarian NGO, Proud Lebanon, Bertho Makso believes the community should maintain a low profile and remain mindful of the titling of its events.

“We should be careful with how much the society can take at the moment and focus on building alliances and working with politicians under the radar,” Makso told NOW.

Prior to the government crackdowns, Proud, in collaboration with other NGOs and civil society movements, was working to collect the necessary number of signatures in the Parliament to demand the end of Article 534. However, the NGO is uncertain whether the latest commotion will push parliamentarians to change their minds.

Makso claims that the Sunni Mufti was under the impression that advocacy groups were aiming to legalize same-sex marriage, prompting attacks on the community.

“We’re aware that same-sex marriage is off the table and we would not advocate for it in light of our current society. Our only aim is to protect people’s dignities and legal rights as dictated in the constitution,” Makso said.