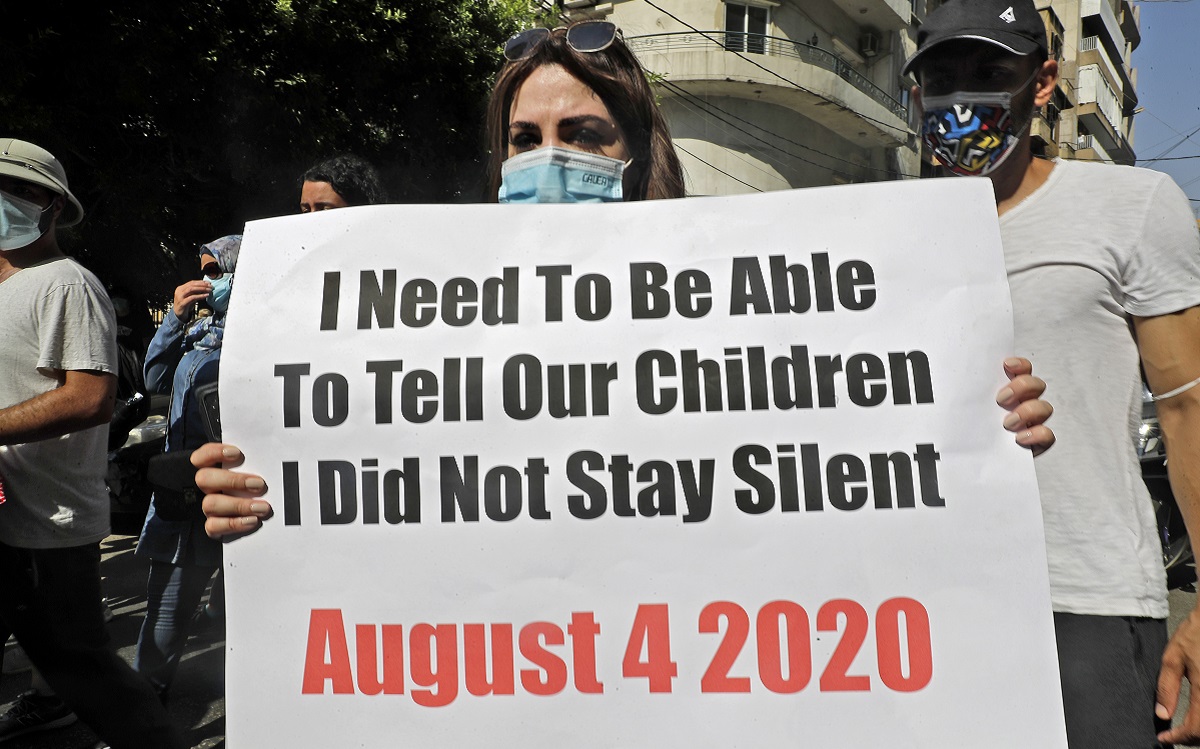 A demonstrator marches with a sign reading in English "I need to be able to tell our children I did not stay silent" in the Gemmayze neighbourhood as protesters head towards the port of Lebanon's capital on August 4, 2021, on the first anniversary of the blast that ravaged the port and the city. Photo: Joseph Eid, AFP.

Lebanon’s politicians may be seen as many things. Fearmongering, ineffective, arguably corrupt.

But one thing that is often left out is their tenacity to try and get things done…at least when it concerns or benefits them.

Since Judge Bitar announced that he wanted former PM Hassan Diab, and MPs and former ministers Ali Hassan Khalil, Yousef Fenianos, Nohad Machnouk and Ghazi Zeaiter to come in for questioning, they and their political allies have relentlessly tried to have Bitar removed from the investigation. Just like they did with his predecessor, Fadi Sawan.

For a third time, the investigation was put on hold after Fenianos filed a lawsuit, forcing the judge to wait until the appeals court made a ruling on the matter.

This was the fifteenth lawsuit filed against Bitar.

With Appeal Court Judge Nassib Elia rejecting cases filed against Bitar, the prospect of a suspension looked grim for those called in for questioning as suspects.

So, Hassan Khalil and Zeaiter, whose complaint against Bitar had been rejected by Elia in September, filed a lawsuit against Elia.

According to an announcement made by the Court of Appeals chief Habib Rizkallah on Saturday, the file is set to be reviewed by Judge Habib Mezher, who is seen by many as close to Hezbollah and Amal.

Mezher’s first decision was to accept Fenianos’ complaint against Bitar and, thus, suspend the investigation for a third time. Rizkallah was forced to point out in the press that Mezher was in charge of the case against Elia, not Bitar.

The lawyers of the victims of the Beirut port blast requested that the case against Elia and the case against Bitar be separated, thus making Mezher’s ruling to accept Fenianos’ complaint illegal.

According to the Associated Press, Mehzer had asked Bitar to hand over details of the case so that the court could better make a decision about his dismissal.

The lawyers of the families of the victims said that they would be taking legal action with the Court of Appeals on Monday, calling on the judicial body to penalize Mehzer for “committing blatant fraud” and for there to be an investigation into Mehzer.

The activist group Mutahiddoun also said that their lawyer, Rami Ollaiq, had filed a lawsuit with the Court of Appeals to have Mehzer recused because the judge has “political connections directly linked to the figures who have been summoned for interrogation, which allows for legitimate suspicion over his role and the motives of his decision in terms of the lack of objectivity, neutrality and impartiality.”

No announcement has been made yet concerning Mehzer.

A Gulf of sorrow

In addition to this, Bahrain urged its citizens to leave Lebanon following the ceasing of relations between the two countries.

Kordahi’s choice: Upon his return from the COP26 in Glasgow, where he met various world leaders to ask for help, Mikati once again made it clear that Kordahi needed to resign to help the country out of this new crisis.

“I call on the minister of information to listen to his conscience, take the position that should be taken and give priority to the national interests,” Mikati said in a November 4 speech, upon his return to Lebanon.

The embattled information minister responded  by saying that he “will not resign and that is not going to change.”

Without Kordahi’s resignation, the Saudis are not going to back down, stoking Lebanon’s fears that the diplomatic row would worsen the already dire economic situation in the country.

Hezbollah and its political allies, who have rallied behind Kordahi and whose supporters have been very vocal in celebrating both the former television star’s statements and the Gulf states’ withdrawal of their support for Lebanon, have conditioned their presence in Mikati’s government on Kordahi not resigning.

It may not have gone as planned: A major reason for the break in relations between the Gulf and Lebanon is the growing influence of Hezbollah and, by extension, Iran in Lebanon, a country where the Gulf has invested billions of dollars.

So by cutting off ties with Lebanon, the Gulf, in particular Saudi Arabia, are hoping that it will force a reckoning where the politicians will take action against Hezbollah and limit the armed party’s power.

However, the move may have the opposite effect.

For more on the intended and unintended consequences of the Saudi withdrawal from Lebanon, check out my piece here.

A huge loss in trade: L’Orient Today’s Albin Szakola calculated how much Lebanon loses in terms of trade after the cut ties with Saudi Arabia. (While you’re there, also read his investigation into the fantastic takes of the Beirut port container terminal. )

Mediation attempts: An Arab League delegation is in Beirut today, but no one has high hopes, despite diplomats saying it was all “going in the right direction”.

On Thursday, November 4, Lebanon’s parliament reaffirmed that parliamentary elections would be held early on March 27, 2022 rather than the previously planned May 8.

The bill, which had been sent back to the Parliament by President Michel Aoun who is against early elections, passed by 77 votes.

The session did not end without disagreements. The president’s son-in-law and president of the Free Patriotic Movement, Gebran Bassil, opposed the amendment saying that it would coincide with the Christian Lent.

During the Thursday vote, the FPM voted against the amendment and, after it passed, the party’s MPs walked out of the session.

Independents win in universities: For the second year in a row, independent candidates won the majority of seats in the student councils of all the departments of the Universite Saint Joseph in Beirut. However, students affiliated with the Christian Lebanese Forces managed to win 49 seats, almost double compared to the 25 they won in 2020.

The IMF talks: The IMF has begun “preparatory” talks with Lebanon on a new aid package after receiving an official request from Beirut, an IMF spokesman said Thursday.

Hezbollah doesn’t have a sense of humor: Hussein Kaouk, a 28-year-old Lebanese comedian, is under attack by Hezbollah-affiliated media and social media accounts after local channel Al Jadeed aired one of his sketches where he criticizes Lebanese political parties. Kaouk has been under intense attacks on social media, with some accounts inciting violence against the comedian. We will not link to them for obvious reasons

Podcasts: The Beirut Banyan’s host Ronnie Chatah decided to grace our ears with not one but two episodes this week.

On Friday, November 5, Chatah released a short episode where he discussed next year’s planned elections, the international and regional posturing regarding Iran and the possible return of Syrian influence in Lebanon.

He also spoke with musician and AUB philosophy instructor Rabih Salloum on Sunday where the two discussed his recent solo project Grave Jones as well as their experiences in Beirut since 2005.

Sarde After Dinner also released a new episode with the hosts, Medea Azouri and Mouin Jaber, speaking with photojournalist and Director of the Photography Department at Annahar Nabil Ismail about life in Beirut during the civil war, war in Lebanon and the effects that being a photographer in such times may have on an individual.

The lawyer for the foreign Beirut blast victims is filing a lawsuit on Monday with the Court of Appeals to penalize Judge Habib Mehzer and to investigate his attempt to remove the lead investigator of the Beirut blast Judge Tarek Bitar.

The employees of the state-owned electricity distributor Electricite du Liban have scheduled a strike that is scheduled to last for several days.

The families of the martyrs of the Fire Brigade will hold a press conference at 2pm to take a stand against the political interference into the Beirut blast investigation.

Lebanon plays with Iran in the 2022 World Cup qualifiers at the Sidon stadium on Thursday, at 3 pm.