The light that often goes out

Private power providers face fuel shortages and resort to daily power rationing as tension rises between them and their customers over higher prices and less electricity. 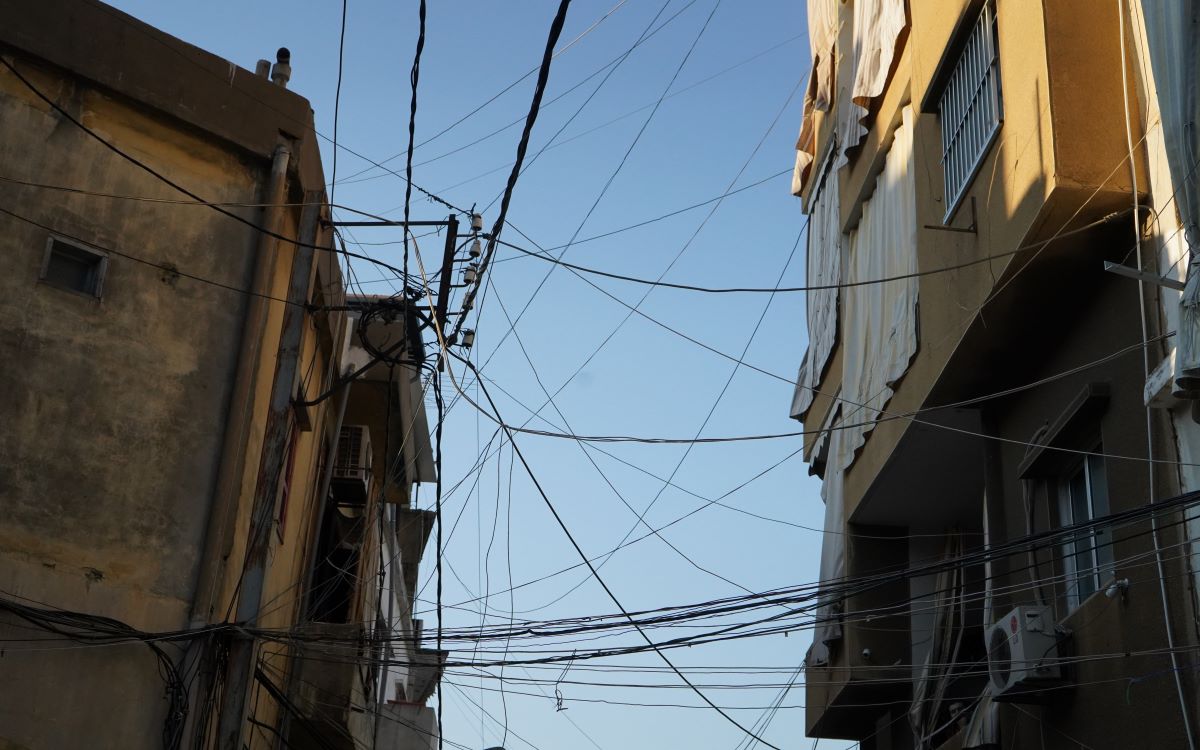 With a sweaty face and soaked clothes, Ali, 29-years-old, sat down on the floor of his Beirut gym and expressed his frustration at the unbearable July heat and the lack of air conditioning.

“It’s all because of the owner of the generator that this is happening,” he said. “If he would just fix his generator, we wouldn’t be here.”

Behind him,  a young man, M.K, early-twenties, overhears the conversation.

“My dad and I own generators around this area and I can assure you this isn’t our fault,” M.K said.

Although Ali’s frustration is understandable – his workouts are often interrupted with sudden power cuts, and the machines stop working for a few minutes, sometimes hours – electricity shortages are not a novel issue to Lebanon.

As the summer temperatures soared, fuel availability plummeted, exacerbating the frustration of both generators’ owners and Lebanon’s residents.

“People think it’s our fault, but what they don’t know is that sometimes we have to pay from our own pockets to ensure people don’t get full blown power blackouts,” M.K said.

“All in this together”

Power cuts worsened in Lebanon as its two major power plants, Deir Ammar and Zahrani, which together provide around 40% of the country’s electricity, shut down on June 25. This was due to Electricite du Liban’s (EDL) lack of financial resources to pay off the tankers carrying fuel in Lebanese waters, who refused to offload it before receiving full payments in U.S dollars.

This situation led private power sources to completely take on the role as the primary, and sometimes sole, providers of electricity in the whole country.

“As long as I have the fuel I won’t cut off electricity,” A.J, a private power provider in Beirut, told NOW.

“But some days my fuel provider tells me that he can’t give me any for the day so I have to cut off power for a few hours. You think I want to?  No I don’t, but I have a choice to make.”

Both A.J and M.K say that the electricity bill might have become more expensive, but for their businesses, the new skyrocketing prices do not make up for the losses.

“The municipality fixed the price at 450 Lebanese lira per month,” M.K said. “But we make no profit out of that, and if we try to increase the price to 500 lira, some people will file complaints to the Ministry of Economy.”

The prices can not be fixed for a long time as the dollar to lira rate changes drastically from one week to another. For the providers, their whole business relies heavily on the dollar, and any minor repairs required for the generators can reach up to $1000, which in today’s economy means a fortune.

Although the Ministry of Energy gave an official price for the fuel, providers benefit very little from it.

“They give us five thousand liters a month at the official price,” M.K explained. “This amount can only last me a week. I need at least sixty-four thousand liters to keep everything running throughout the month.”

Private generator owners like A.J, however, lack access to official fuel resources and have to resort to the black market, as they are not legally registered as an official company.

According to both power providers, black market prices can be ten to forty Lebanese pounds above the official price, depending on the fuel’s availability and the dollar to lira rate.

In light of these desperate events, desperate measures are called to play. The most infamous measure manifested in daily temporary power cuts (taaneen).

The word “taaneen” in its literal sense means rationing. In this case, electricity is being rationed and suppliers are turning off generators at specific hours to avoid losing fuel.

The term has gained massive popularity over the last few weeks in every household as it became part of everyone’s daily routine,  interfering with every aspect of life, from sleeping and eating to studying and working.

Dr. Zaher Sleiman is a 26-year-0ld dentist who is putting his best efforts to try to manage his newly-opened clinic with the new power cuts schedule.

“I’ve opened up this clinic like a month and a half ago,” Sleiman said.

“And with our work everything requires electricity, all the equipment and machines need power, down to the chair where the patient sits.”

For the young dentist, the situation is still manageable as he gets notified of the power cuts, which occur usually around 1pm.

“This time for me can be a lunch break so it’s bearable so far,” Sleiman stated. “But I’m not sure how we can work it out if it gets worse in the future.”

His work schedule underwent a shift and appointments had to fit around the electricity’s availability as well as the patients’ ability to arrive on time due to traffic jams. But for the young dentist, it’s better to avoid power cuts while working on a patient, especially if his or her condition is urgent.

“Imagine if there was a total blackout and you were working on a patient and now you have to either postpone or make them wait an hour or an hour and a half for the electricity to come back on,” Sleiman explained.

For M.K however, regardless of the circumstances, power rationing is out of the question.

“We live in the 21st century,” he said. “How can you live without electricity? What we don’t accept on ourselves, we won’t accept on others and we refuse to live in darkness.”

A moral dilemma imposed itself on the providers as they do not wish to cut the people off from power, especially amidst the stifling heat of July, but they also do not wish to run out of fuel nor money.

“People do not know what they want,” M.K explained. “They want neither power cuts nor an increase in prices. How can we provide both?”

As prices have gone up in general in the country due to the economic crisis, many are unable to cover the costs of their generator’s subscription, which leaves the providers with little choice.

“I know a lot of honest and decent people who genuinely can’t afford to pay their bill,” A.J stated.

“And honestly speaking, I don’t have the heart to cut people off completely. I have to bite my tongue and rely on God to help me out.”

M.K shares the same sentiments. He is aware of the responsibility he shoulders, especially towards people who can barely afford to pay or not afford to pay at all.

“I provide power for offices, clinics and shops,” M.K stated. “They’d all go out of business if I’m unable to provide. I can’t do that. And I even accept payments as little as 250 lira. This forces me to have to cover the losses from my own pocket and sometimes personal savings.”

However, not all generators run in the same manner.

In Lebanon, it is widely recognized that there are two main players in the private generators’ business; the ones affiliated with a political party and the ones who are not, M.K. explains.

M.K explained that those supported by political parties have easier access to fuel. Plus, some providers can charge up to 700 lira without facing any sort of consequences.

“We used to try to unify the price in the area I’m in,” M.K stated. “Which sometimes required us to tip the affiliated providers every month,in order to keep the situation at bay and not cause a huge difference in prices. But starting this month, it’s harder to do so.”

Regardless of political affiliation, the power cuts have rendered every resident of Lebanon a victim of some sort of inconvenience, or even danger,  leaving the sick especially, in need of new solutions.

On July 7, an asthma patient resorted to plugging in his oxygen concentrator at a mosque in Beirut. The man was making use of the mosque’s generator at the hours of dawn because he did not have any electricity nor a generator subscription at home.

In these circumstances, Lebanese society is facing a social explosion, where each person will be compelled to take measures to provide for themself even at the cost of harming others.

In the southern district of Nabatieh, as shortages of power and gasoline surged, fights did too. One fight occurred after residents of the village of Habbouch were informed about fuel availability at one gas station that had been closed for over 6 months. Tens of people forced the owner to submit and provide fuel for the generators that were on the verge of running out.

M.K. and A.J. understand the essential role electricity plays on the day-to-day basis of every resident’s life. For A.J, the solution was to ration electricity during the day and keep it on at night, especially when people go to bed.

M.K says his efforts could be compared to trying to keep a pressurized gas tank from exploding.

“The situation in Lebanon can’t take any more hardships,” he explained. “Lack of gasoline and electricity play a major role on a person’s mindset and mood. Those are the two major concerns right now.”

Regardless of their efforts to keep the situation under control, neither the providers nor society at large are content with the compromises offered. According to both suppliers, their businesses should not even exist as it is the government’s role to provide electricity.

“People demonize us and see us as thieves, frauds, immoral and insensitive,” M.K stated. “They think we don’t feel their pain but we do. It’s the government they should be angry at, not us.”