The death of Queen Elizabeth II is a potent reminder of how power manifests itself in society and the lessons that can be learned from said power. 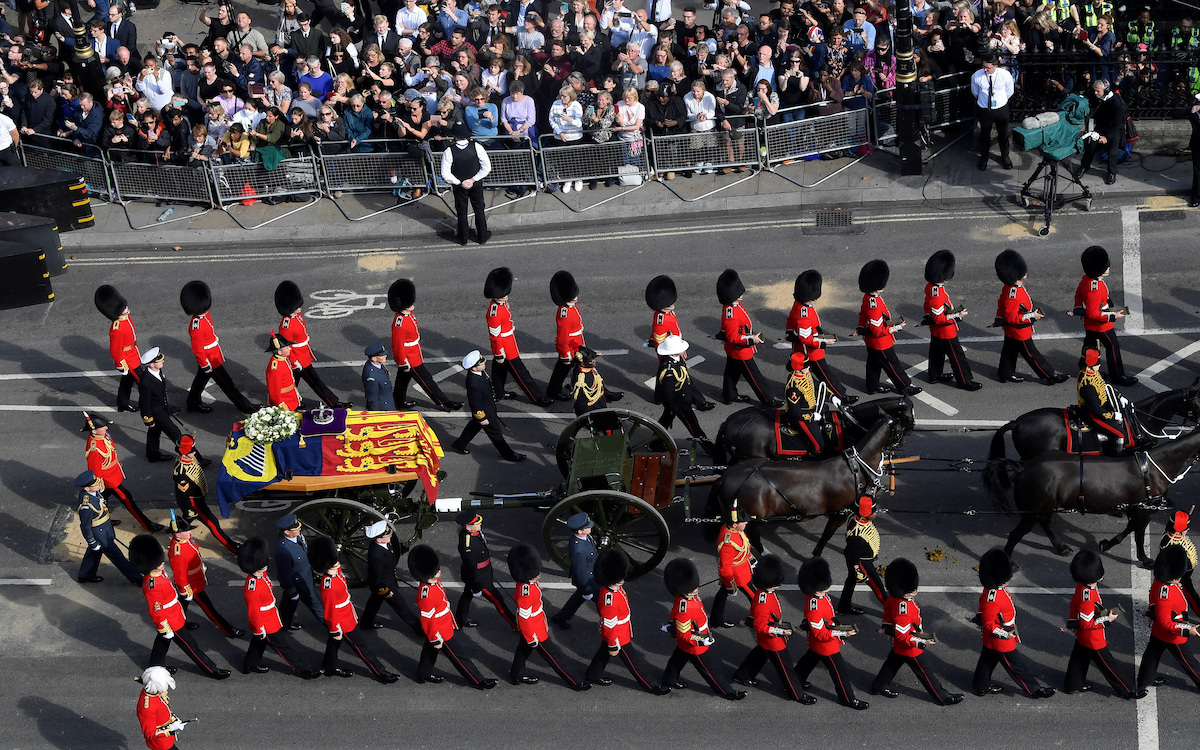 Guardsmen march beside the coffin of Queen Elizabeth II, adorned with a Royal Standard and the Imperial State Crown and pulled by a Gun Carriage of The King's Troop Royal Horse Artillery, during a procession from Buckingham Palace to the Palace of Westminster, in London on September 14, 2022. Queen Elizabeth II will lie in state in Westminster Hall inside the Palace of Westminster, from Wednesday until a few hours before her funeral on Monday, with huge queues expected to file past her coffin to pay their respects. Photo: Toby Melville, AFP.

There is a common misunderstanding that money and power are synonymous concepts.

However, the crucial aspect of their relationship is that money is only one of many tools that secure power.

The death of Queen Elizabeth II is a useful example of this understanding of power.

The keys to power rely on a variety of factors, including institutions, narratives, coercion, potential violence, and, of course, wealth.

In Syria, for instance, when a revolution broke out against the Syrian government under Bashar al-Assad in 2o11, thousands, if not more, were mobilized to openly demonstrate in support of the regime.

This was done by essentially forcing all public servants to head to the streets, with the implicit threat that they could lose their jobs or even face more violent consequences.

This is not to say that all support for Assad was driven by coercion.

Indeed, every government must find a segment of society that will willingly support it, even if that segment is relatively small.

Following the Queen’s passing, the British government did not need to coerce large segments of the population into grieving her, as they did it of their own volition.

Assad could only dream of having that sort of power.

Though he may control Syria’s institutions and security forces, he does not possess the same level of cultural hegemony that the British royal family enjoys.

Power inherently relies on people and the ability to make them act in a certain way.

As I have written about in the past, there are a variety of similarities between Northern Ireland and Lebanon that one can explore.

The comparison from which I would like to draw for the purposes of this discussion is between Northern Ireland’s Irish Republican Army (IRA) and Lebanon’s Hezbollah.

However, the important question is why did the IRA essentially become defunct (though splinter cells are still active in Northern Ireland to this day), while Hezbollah has only grown more powerful since the conclusion of both groups’ primary struggles.

The similarities between the IRA, from its resurgence in the late 1960s to the end of the Troubles in Northern Ireland in 1998, and Hezbollah, from its inception in 1982 to the mid-2000s and onward, are stark.

Both groups formed among a segment of their respective populations that were downtrodden on a largely sectarian basis.

In Northern Ireland, Catholics were treated as second-class citizens and languished in poverty, creating fertile grounds for an insurgency to form against the British government and the Protestant paramilitary groups that it supported. For added context, Catholics largely identified as Republicans, meaning they supported a united Ireland, while Protestants largely identified as Unionists/Loyalists, meaning they supported remaining part of the United Kingdom.

In Lebanon, Hezbollah was birthed from the oppressive occupation of South Lebanon by Israel following its invasion of Lebanon in 1982. Not to mention that the population from which Hezbollah draws its support, Lebanon’s Shiite community, was one of the most marginalized in Lebanese society at the time. Iranian support also assisted what was inevitable.

Both movements, which were founded on the moral and noble grounds of resisting occupation, began to grow in numbers and project power within their respective communities.

However, as time went on and the level of power both groups enjoyed expanded, it became necessary to reinforce said power via coercion and violence.

As the Troubles dragged on for nearly three decades, the IRA  increasingly used violence against the community it claimed to protect in order to preserve its hegemony over Northern Ireland’s Catholic Republicans.

For Hezbollah, a similar pattern emerged, especially following Israel’s withdrawal from Lebanon in 2000 and Syria’s withdrawal in 2005.

Outside of assassinations, in recent years, Hezbollah has increasingly found it necessary to use coercion and violence against its community.

Since the October 17 Revolution, Hezbollah has attacked protesters on multiple occasions to pacify dissent within the Shiite community.

The recent case of Hassan Shaaban is a good example.

Hezbollah ceased to simply protect the Shiite community from Israel and began to implement regional aspirations, while also cracking down on the people it had sworn to protect.

The divergence between the two groups then has to do with why the IRA largely demobilized and Hezbollah did not.

By the end of the 1990s, the conditions for insurgency in Northern Ireland had begun to recede, as Catholics had more economic power and the IRA decided to put down its weapons in a comprehensive peace accord.

Even though the core Republican dream that Northern Ireland become part of the Republic of Ireland was not realized, the conflict ended and sectarianism in Northern Irish society is slowly receding, even if sectarian tensions do occasionally flare up.

However, in Lebanon, Hezbollah essentially won its war against the Israeli occupation of the south, but that ultimately did not lead to the group losing its power over the Shiite community.

Instead, Hezbollah has only become more powerful.

The roots of Hezbollah’s continued power

The crucial difference between the IRA and Hezbollah comes down to a few relatively basic ideas.

Though the IRA did receive some foreign support for its struggle against British occupation, it never enjoyed the level of support that Hezbollah received from Iran.

Iran has spent hundreds of millions of dollars in its support for Hezbollah, and the group now has reliable means to generate capital on its own, unlike the IRA which heavily relied on donations and other petty money-making schemes.

The IRA relied on illicit fuel conversion to fund its operations, which generated some capital to fund its activities, but it was nowhere near the scale of Hezbollah’s financial operations.

Hezbollah draws upon a vast network of financial avenues to generate revenue, including regular businesses, smuggling of goods, especially fuel, and a massive drug empire that spans the entire Middle East.

On top of that, the material conditions that created the environment for the IRA to gain momentum in the Catholic community were largely resolved, i.e. Catholics no longer lived in the levels of poverty generally necessary to fuel an insurgency.

In Lebanon, though the Shiite community has seen some economic benefits since the end of the civil war, said benefits have primarily come through Hezbollah and its ally the Amal Movement.

Whereas in Northern Ireland, economic benefits for the Catholic community ultimately came from the state or the European Union, the politics of patronage in Lebanon persisted after the civil war, allowing Hezbollah to provide goods and services that the historically weak central government did not.

Finally, there is a certain cultural hegemony that Hezbollah and post-revolution Iran have managed to cultivate within Lebanon’s Shiite community.

And this is where the example of the Queen comes back.

The IRA was not a fan of the British monarchy, and it even managed to assassinate Lord Mountbatten, the former British viceroy to India, who was a close relative of the British royal family.

Though the IRA opposed the British monarchy, and the Catholic community at large generally saw it as a symbol of British colonialism, many Catholics, usually of the older generations, still possessed a certain respect for the Queen.

My late grandmother, an ardent Republican and no fan of the British, still respected Elizabeth for being a “woman of her time.”

My mother, who is an ardent Republican as well, also views the Queen with a certain respect, even if she is no fan of the British royal family.

The British, although disliked by much of the Catholic community, still hold some cultural sway.

Indeed, a recent poll in the Republic of Ireland found that the late Queen was quite popular with the general population.

In Lebanon, however, Hezbollah’s narrative, which cannot be separated from the material concerns the Shiite community experience, is still very powerful.

Regardless of whether one believes that Hezbollah started the 2006 war or not, Israel’s aggressive actions left Lebanon, primarily the south, in utter ruin.

Other massacres, such as the Sabra and Shatila massacre or the Qana massacre, have only served to deepen the belief within Lebanon’s Shiite community that Israel will continue to threaten their country and no one will protect them except Hezbollah.

Indeed, Hezbollah’s narrative is one of the strongest in Lebanon, not only amongst its followers, but also more broadly, throughout the region as a whole.

If Hassan Nasrallah were to die for whatever reason tomorrow, how many Lebanese would grieve?

I doubt it would take much, if any, coercion to mobilize the Shiite community at large and even segments of other communities in Lebanon to grieve his death.

Much like the late Queen, that’s a type of power money can’t buy.

A sea full of bodies