The “national university” in crisis

Struggling with chronic underfunding and shaken by staff and student protests, the only state university in Lebanon, the Lebanese University, is on the brink of collapse. 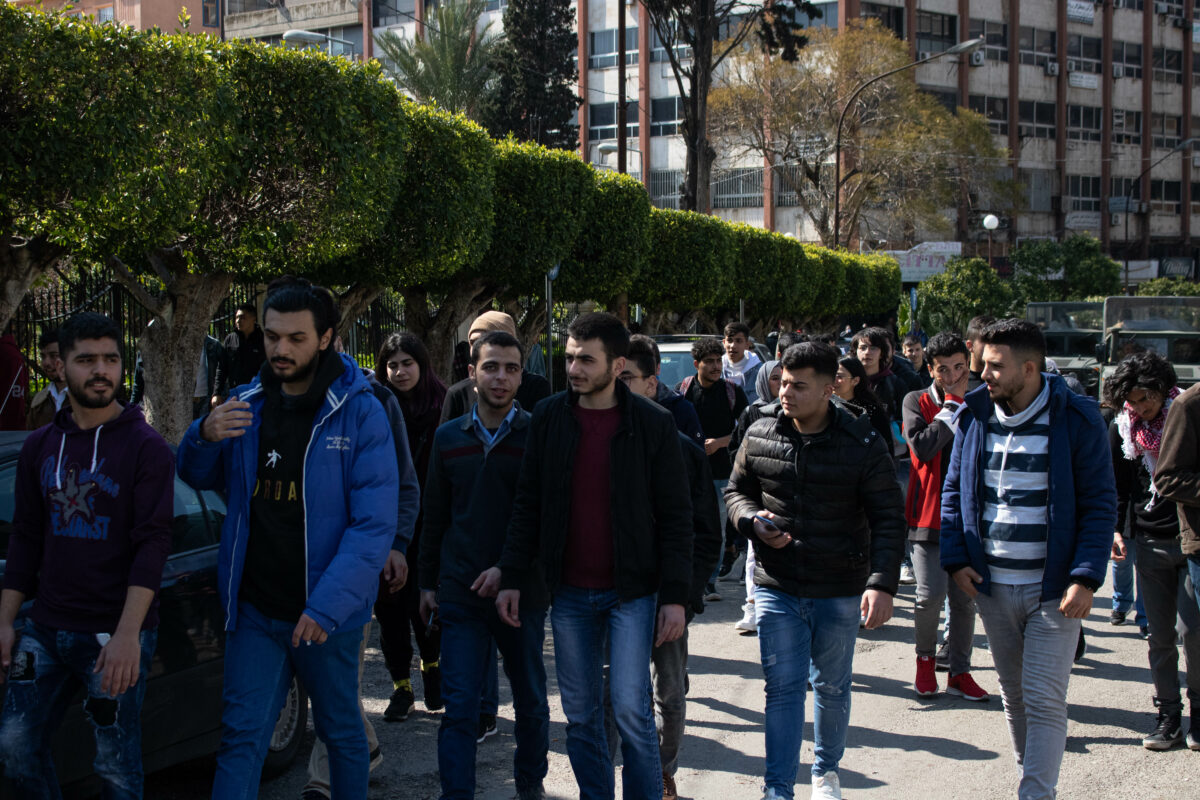 Students from the Lebanese University protest in Tripoli on March 26 over the lack of funding for the country's only public university which threatens their educations and their futures. Photo: Nicholas Frakes, NOW.

Ahmad, 21, has one thing in mind: to get his degree and leave the country. But now, he is not sure he will even be able to finish his degree.

The final-year chemistry student attends the Lebanese University (LU), Lebanon’s sole public university. However, his future now depends on an indefinite series of crises that hit the public institution as a result of the country’s deepening economic collapse in the past few years.

The Lebanese state University, established officially in 1959, has 68 branches spread across the country.

Its fees are affordable for many Lebanese students whose families cannot afford the thousands of dollars in tuition fees charged by private universities. It costs 500,000 Lebanese Pounds per year (around 21$ at the current market rate) for a bachelor’s degree and 1 million LBP (around $42) for a master’s degree.

But, despite being the only way for many youths to access university education, with the economy deteriorating and the government cutting its budget to a small fraction of what it needs for its campuses to survive, the Lebanese University seems to be taking its last breaths. Poorly paid professors and staff have been on strike for longer stretches than they are teaching, and exams have been postponed, in many cases indefinitely.

An institution that was affected over the years by civil war, sectarian divisions, improper management, and even corruption allegations, must now face grave financial difficulty due to the devaluation of the national currency.

“The University of the Nation”

Ahmad’s finals were scheduled for late March when the executive body of the Association of Full-time Professors was on a strike or ” a forced cessation of academic work“. This was triggered by the government’s cut on the University’s budget this academic year, which amounts to about $12 million at the Lira’s current black market value. This comes in stark contrast to the $265 million budget that the university had requested in order to fund its campuses across Lebanon.

In previous years, the government has also shelved a number of files imperative to the university’s functioning For example, the admission of full-time professors to the governmental employee body which grants them access to other public employment in case the university shuts down, the appointment of deans and representatives in the University council, and access to mutual funds, are a few critical files that have been closed.

The government’s negligence threatens the academic year for professors and students alike, as individual faculties attempt to remedy the situation by piecing together last-minute solutions, students and professors say.

“Although our professors are on a strike, the head of our faculty is adamant for us to finish this year on time so we can apply to jobs and visas abroad,” Ahmad told NOW.

According to historian and researcher Adnan Hammoud, upon the formation of Greater Lebanon during the French mandate in 1920, there were only two private universities: the Anglophone American University of Beirut (AUB) and the Francophone University of Saint-Joseph (USJ).

Hammoud says that in 1951, the General Student Union of the Lebanese Communist Party at USJ were the first to call for a state-run Lebanese University with less costly fees. Thus, on February 2 1951, Beirut witnessed its first student-led demonstration, where protesters clashed with security forces which led to the death of USJ student, Faraj Allah Hanin.

Their demands were met that same year whereby deans from the francophone university formed the first and only faculty titled The Higher Order of Teachers. However, Hammoud says it wasn’t until 1959 that the university gained its first four departments: literature, sciences, law and social sciences.

“This was probably the only time a decision regarding the university was taken without the pressure of professors and students,” he added.

What followed is a series of protests that resulted in key reforms and the organization of the university’s internal structure, as well as labor rights for its professors. The newly formed institution was nicknamed the National University, as it was designed to cross-sectarian divisions and granted equal rights to advanced education for all Lebanese.

It wasn’t until the civil war that the university established separate campuses East and West of the dividing Green Line.

“This was the only option to ensure the safety of professors and teachers during the war,” Hammoud said in an article published by Legal Agenda.

The Lebanese University can be seen as an indicator of when a financial crisis may hit Lebanon. It was one of the institutions first hit by budget cuts. Months before the financial crash triggered the October 17 protests, in May 2019, Lebanese University professors and students demonstrated in Martyrs Square against a decision by Saad Hariri’s cabinet to drastically cut funding and salaries for the already financially struggling university. Since then, with the country’s economy and the local currency deteriorating, the fuel crisis and skyrocketing prices, as well as the government’s inability to pay public employees, the Lebanese University is being left to die.

On April 3, UL professors organized a protest in the vicinity of the presidential palace which ended in clashes with security forces.

However, Basel F. Saleh, Professor of Philosophy at UL’s Humanities Faculty and activist for labor rights, told NOW that the academics’ demands have been ignored by the government since long before 2019. The compounded crises only exacerbated a harsh pre-existing reality.

In 2019, the university’s professors went on a 50-day strike, and although the government at the time promised to look into the university’s situation, “the establishment took advantage of the October 17 revolution to seek an excuse to shelve the files indefinitely,” Saleh said.

In 2020, in lieu of the pandemic, teaching was transferred online, which, according to Saleh, was convenient for the professors and students alike, allowing them to save on transportation costs. The depreciation of the local currency curtailed the professors’ salaries from $2,500 to less than $200 a month.

“With the rising gas prices, I was able to save up by staying at home and not having to drive to work,” he said.

Saleh also said that 80 percent of the professors aren’t registered as full-time employees, which denies them access to health insurance and monthly paychecks – they are currently paid biyearly.

When you don’t have full-time professors, you can’t force them to attend administrative meetings. More than that, when you don’t give them social and financial security, they have to work several jobs so you’re taxing them with more stress which could affect the quality of education.

“When you don’t have full-time professors, you can’t force them to attend administrative meetings,” he said. “More than that, when you don’t give them social and financial security, they have to work several jobs so you’re taxing them with more stress which could affect the quality of education,” Saleh added.

As a student, Ahmad experiences this phenomenon firsthand. He describes his professors as “negligent and careless”. His primary complaint was that, being a student of scientific studies, online teaching was debilitating.

“Some professors send us pre-recorded lectures from last year, others don’t bother answering our questions. We have complicated scientific terms and we are in need of laboratories and in-person scientific experiments to understand what we’re learning about,” the student said.

Ahmad worries this might affect his professional future, as he doesn’t feel knowledgeable in the practicalities of his degree and says that the equipment used in labs are outdated.

Although his faculty, like many others, decided to resume with exams, Saleh said that professors, in general, were still at liberty to choose not to mark these papers because they are technically on an indefinite strike.

The country’s sectarian power-sharing system has also taken a toll on the state university. Saleh says that the university needs deans in the University council, but the positions are left empty because of perennial disagreements on sectarian quotas. Without centralized decisions and a unanimous agreement on strikes, individual departments were left to decide on their own policies and fend off for themselves.

The political science student Soltan Husseini’s faculty took the decision to postpone the exams to April 8 and begin the spring semester on April 11. This was not surprising for the first-year students like Husseini, who started their junior year with day-to-day updates from the students’ council, which keeps them aware and knowledgeable of administrative decisions.

“Our schedule now relies on knowing the professors who are willing to teach and those who are on a strike. We requested in-person lectures that they promised to give, only to cancel them on the same day. We definitely feel the disparity between the professors and us,” Husseini said.

According to Saleh, sometimes faculty heads would even have to step in with personal initiatives to procure basic exams necessities such as paper and ink.

Ahmad, the Chemistry student, explained that his department was compelled to hire people to supervise their finals, and issued new measures such as reducing font size to save on paper.

He added that having sectarian factions control the academic grounds also contributed to the chaos: it meant that any type of dissent was subject to political silencing. This was aggravated by the fact that student councils go lengthy whiles without elections and, according to Husseini, this contradicted the democratic revolutionary values on which the University was built.

Lebanese American University, one of Lebanon’s top private universities, revealed that it will be adopting a fresh dollar budget policy starting Fall 2022. Rising worries among students suggest that other universities might follow suit. This reinforces the role of UL as the only affordable option for most Lebanese to get a university degree.

However, Saleh and other activists believe the state was intentionally sabotaging UL to deter students from joining.

“Politicians are on the boards of private universities so it’s better for them if UL wasn’t an option anymore. Instead, they would rather students migrate to their private institutions while providing them with aid and scholarships to keep them dependent,” Saleh said.

But for Yara Saad, a 24-year-old English literature student, migrating to private universities is not a considerable option. Saad dedicated seven years to obtaining three degrees from UL, while still planning for more.

She has two bachelor’s degrees, one in Journalism and one in Arabic Literature, in addition to one master’s degree in Journalism. A student of two faculties, Saad told NOW that the buildings were in poor condition, with no maintenance and renovations whatsoever for many years.

But even though conditions were tough and professors were sometimes unfair, Saad says she still sees the silver lining in her UL experience.

“I gained all of my journalism skills from amazing professors. While it is true that I had to learn a lot of the skills on my own, considering there was a huge lack of practical learning, it is evident to me that I developed my strength from all the effort I’ve put into my education at UL,” Saad said.

Both Saad and Husseini agree that Lebanese University students need to exert more effort than private university attendees considering the disorderly nature of their institution, but this was a reality they were forced to adapt to.

“Most UL students understand that private universities are not an option if they fail. So they normalize this strenuous pressure they are put under to keep going and graduate, even though it comes at the price of their mental and emotional health,” Husseini said.

Consequently, Saleh says some professors regard this struggle to save the state’s university, as a battle fight against the system; a fight for equal rights and for equal opportunities.