MPs stage overnight sit-in at parliament in protest of the stalling presidential elections, a move some deem as vacuous. 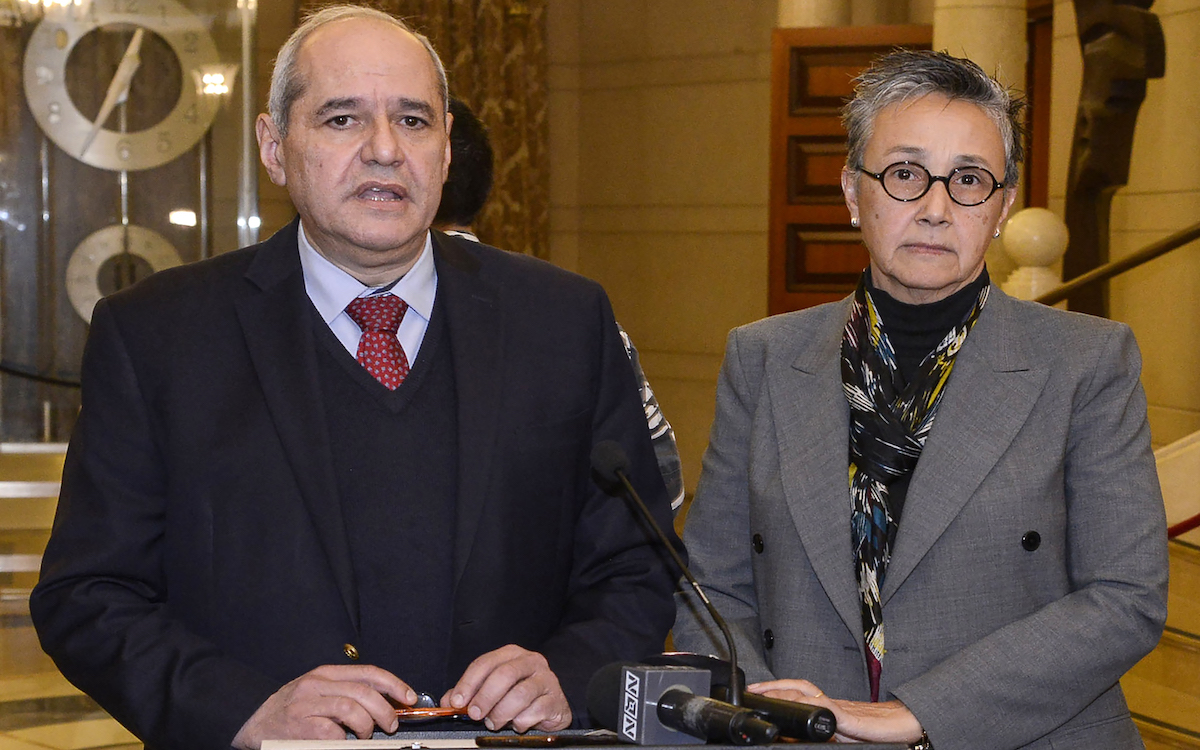 This handout picture provided by the Lebanese Parliament Press Office on January 19, 2023, shows Lebanese deputies Melhem Khalaf (L) and Najat Saliba giving a statement to the press at the end of a session in the parliament building, in the capital Beirut's downtown district. The two opposition deputies announced the start of a sit-in inside the parliament until a president is elected. Photo: Stringer, Lebanese Parliament, AFP

A number of other lawmakers supported the initiative, including the Lebanese Kataeb party, whose leader, MP Sami Gemayel, said: “We are studying the move and we may join it at any time.” He eventually joined them in the late hours of the night.

Why this matters Lebanon has been without a president since Michel Aoun’s tenure ended on October, 30, 2022. In effect, this obstructs the decision-making process in improving the worsening living conditions, in lieu of the new low the Lebanese lira has reached of 50,000 lira to one dollar.

According to Khalaf, parliament should meet continuously until a president is elected.

“For 7 months, they disrupted democracy and put Lebanon in danger of losing this democracy, and the Parliament is responsible for not electing a president,” Khalaf said in a press conference from inside the parliament.”

“Our people are asking us for bread, for water, for electricity, and we are standing helplessly as the lira has hit LL 50,000 against the dollar, amidst useless parliamentary sessions that are not electing a president.”

MP Saliba then stated that “the people cannot take this anymore. All the countries in the world called us to form a government and a state so they can help us. We are asking MPs to come to parliament to vote for a president. This is their duty.”

The sit-in was joined later by independent MPs despite the lack of electricity. MPs were photographed using their phones to light up their dark rooms.

While the State remains in an endless state of paralysis, several key issues such as the Beirut blast investigation, electricity, water, and most urgently, the economic crisis remain pending.

However, the sit-in was met with mixed reactions. Some people encouraged this decision as a step in the right direction for the future of Lebanese politics.

“True change happens in government institutions. And insisting that the parliament be empowered and does its job is god’s work and the only objective worth pursuing for real change,” activist Mustapha Hamaoui wrote on Twitter.

Others questioned the MPs’ move and expressed doubts about its effectiveness.

“What’s the point of protesting inside the parliament? do you have an exit strategy if this plan fails? have you agreed on one candidate?” political observer Samer El Khoury wrote.

it is also unclear if the MPs have unified their decision over one presidential candidate, fueling more doubts around their protest. Some have voted blank in the past, some agreed on one candidate without the agreement of the rest.

In conclusion, the effectiveness of a sit-in in parliament is a contentious issue. Although unprecedented, it’s unclear whether this action will be successful. In any case, any move could be a step in the right direction. The country cannot handle any more delays.