Anti-Turkey protests have erupted in the Turkish-controlled areas of northern Syria in response to comments made by Turkey’s Foreign Minister, and analysts suggest that Turkey will have to do damage control to maintain its relationship with the opposition but also its political and military position. 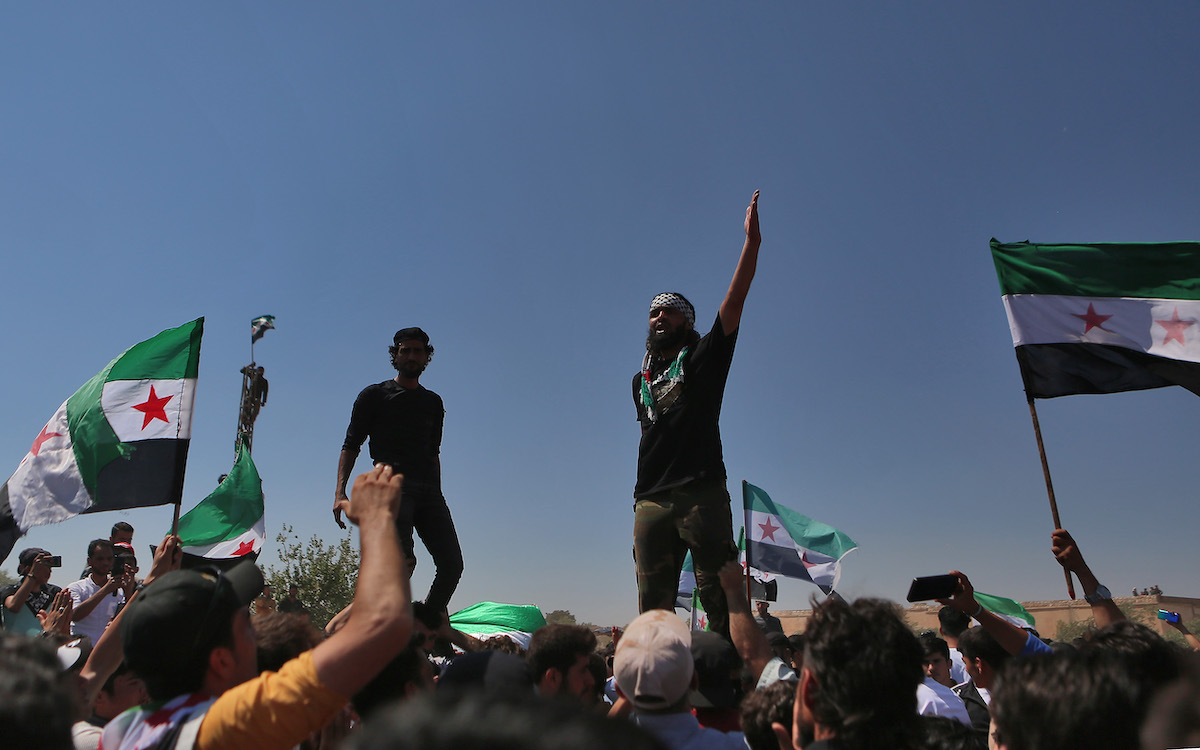 Syrians rally outside a Turkish army position in the opposition-held village of al-Mastumah, about seven kilometers south of the city of Idlib, on August 12, 2022, following statements by the Turkish foreign minister in which he spoke about a possible rapprochement between the Syrian regime and Turkey. Widespread protests were called in Syria's rebel-held north today over a proposal from Turkish Foreign Minister Mevlut Cavusoglu for reconciliation between the Syrian government and opposition. Photo: Aaref Watad, AFP

On Thursday, August 11, the Turkish Foreign Minister Mevlüt Çavuşoğlu revealed that he had met with his Syrian counterpart in Belgrade and said “we need to bring the opposition and regime together for reconciliation somehow, there will be no permanent peace otherwise.”

Such a statement did not bode well with Syrians living in areas of northern Syria controlled by Turkey and its proxy force, the Syrian National Army (SNA).

Demonstrations erupted across these areas, with demonstrators even burning the Turkish flag in protest of the idea of reconciling with the government that had displaced them and, in many cases, killed their family members and friends.

Even certain factions of the SNA made statements condemning the Foreign Minister’s comments.

This may be a good sign that Syria’s 2011 revolution lives on in the minds of enough Syrians to still matter and mean something on the ground.

Selling a revolution for cheap

Most of the countries that involved themselves in Syria on the side of the opposition slowly withdrew their support as time passed. Before Russia’s intervention in 2015, most were certain that the Assad regime’s days were numbered, but, following Russia’s decision, this became uncertain.

The regime would almost certainly be unable to survive without Russian and Iranian assistance, but their commitment to propping up the government seems firm.

From the very beginning, Turkey was the most supportive of the Syrian opposition, allowing, for instance, the Free Syrian Army (FSA) and the Syrian National Council to organize inside its borders.

Of course, the United States and the Gulf also supported the rebels, at least initially, but not to the same degree as Turkey.

With the weapons and support the opposition got in that first year, from the summer of 2011 to the summer of 2012, it managed to capture large segments of the Turkish border, especially in the west.

By 2013, the entire Turkish-Syrian border was out of government control, but, for Turkey, new challenges presented themselves.

As the Syrian army pulled out of certain areas, the People’s Protection Units (YPG), a Kurdish militant group associated with the Kurdistan Workers’ Party (PKK), sprang up as the new guarantor of security.

There is no such thing as a national army in the true sense of the word, but they are factions, each faction having its own connection with Turkey. Perhaps some will stop cooperating, and some will defend Turkey’s position, but it will not withstand the popular protests.

Considering the long war the Turkish military had fought with the PKK, this created some anxiety in Ankara.

As Islamic groups became the dominant force on the battlefield, the US began to move away from the opposition.

The US never gave the rebels enough weapons to topple the regime anyway, and by 2014 and 2015, it finally decided that it would be best to support the YPG, which eventually joined forces with Arab militias and began calling itself the Syrian Democratic Forces (SDF).

This caused issues with Turkey, and by 2016, the situation in Syria drastically changed.

It is believed by many that Turkey, which essentially propped up the rebel bastion in east Aleppo, sold the city to Russia in exchange for al-Bab, Jarablus, and Azaz.

Turkey’s first operation into Syria, Euphrates Shield, nominally was undertaken to fight the Islamic State (IS), but its secondary objective was to prevent the SDF from possessing a contiguous strip of territory on the Turkish border.

It then launched operations to take Afrin in early 2018 and a strip of borderland from Tel Abyad to Ras al-Ayn in 2019.

In these areas, Syrian refugees in Turkey were able to return to Syria. However, this was, in some cases, at the expense of the local Kurdish population, who themselves had displaced non-Kurds at certain points in the conflict.

Northern Syria is a patchwork of both rebel and government factions. In the Turkish-controlled areas, different SNA groups hold different areas, and at times clash with each other.

Tel Rifaat, which is under the joint control of the SDF, Syrian Army, and Iran, is positioned near Afrin and Azaz and is a constant source of conflict, with Turkey on multiple occasions threatening to assault the area.

The city, unlike Afrin or Kobani, was majority Arab, but many were displaced when the SDF captured the area in 2016.

South of Tel Rifaat is the Aleppo countryside, where Iran has a strong presence. Hezbollah had deployed to the area in 2013 under the pretext of protecting the Shi’ite villages of Zahra and Nubl.

Just south of Afrin is Idlib, which is the last fully rebel-held pocket in Syria. It is under the control of Hayat Tahrir al-Sham (HTS), which is an offshoot of Jabhat al-Nusra.

The areas controlled by Turkey have seen on-and-off protests quite frequently in recent months, but these protests are surely different.

Many past protests have been focused on economic conditions, such as the price of bread.

Due to the devaluation of Syria’s currency, the Turkish Lira is largely used in these Turkish-controlled areas, thus linking the local economy to Turkey’s economy, which has been in crisis in the last year or so.

Turkey does not have the decision of the Syrian people, and if it imagines that, it is wrong.

However, what has occurred in the last day is unprecedented.

Samir Nashar, a Syrian opposition politician living in Turkey, told NOW that he expects more protests as the Turkish government tries to do damage control.

“In my opinion, Turkey will recalculate, and it is not in its interest for five million to rise up on its borders, because the people, through [Çavuşoğlu’s] recent statements and Erdogan, who spoke about the possibility of making contact with [Bashar al-Assad], knew… of the conspiracy being carried out against them via the Astana track, which includes Russia, Iran and Turkey.”

Regarding the SNA’s reaction, Nashar, as well as Aliwi, agreed that the response would depend on the specific faction in question.

“There may be splits in positions, and yesterday there were strong reactions from some leaders of these factions. I think today the picture will be clearer as they interact,” Nashar said.

“There is no such thing as a national army in the true sense of the word, but they are factions, each faction having its own connection with Turkey. Perhaps some will stop cooperating, and some will defend Turkey’s position, but it will not withstand the popular protests,” Aliwi declared.

Regarding the future of the Syrian revolution, both Nashar and Aliwi had positive outlooks.

“Perhaps there is a new spirit forming in the opposition and revolution forces after they felt that Turkey’s position had shifted towards reconciliation with Assad and pushed them also in this direction, especially since a large segment of the Syrian opposition, especially the Islamists, was counting on Turkey and considered it the [opposition’s] primary and only ally… This is a real shock for them,” Nashar explained.

“The Syrian revolution has subsided, but it is not dead. These people gave two million martyrs, hundreds of thousands of detainees, and millions of displaced people,” Aliwi told NOW.

“Turkey does not have the decision of the Syrian people, and if it imagines that, it is wrong,” he added.

Turkey will need to lighten the situation as best it can for the reasons that Nashar and Aliwi pointed out, but also because it weakens its political and military position in northern Syria.

Turkey’s leadership will have to make a choice. If it truly wants to normalize with the government, it will essentially lose any legitimacy with the Syrian opposition, both in Syria and outside it.

And Turkey cannot just ignore these grievances either, as one of its top priorities is returning Syrian refugees back to Syria.

Iran, Russia, and the Syrian government are on the sidelines for now, but they may try to inflame anti-Turkey sentiment.

Aleppo is a critical region for both Iran and Hezbollah, and their positions in the area border Turkish-backed forces, so they definitely have a vested interest in what occurs there.

Regardless, one thing is for certain: the Syrian Revolution is still alive.

Syrians, it seems, will continue demanding freedom and dignity.