The road to Lebanon’s resurgence

Justice in the case of Rafik Hariri and tens of other political assassinations, as well as the Beirut Port blast, may not be sufficient, but it is a necessary condition for Lebanon’s comeback. 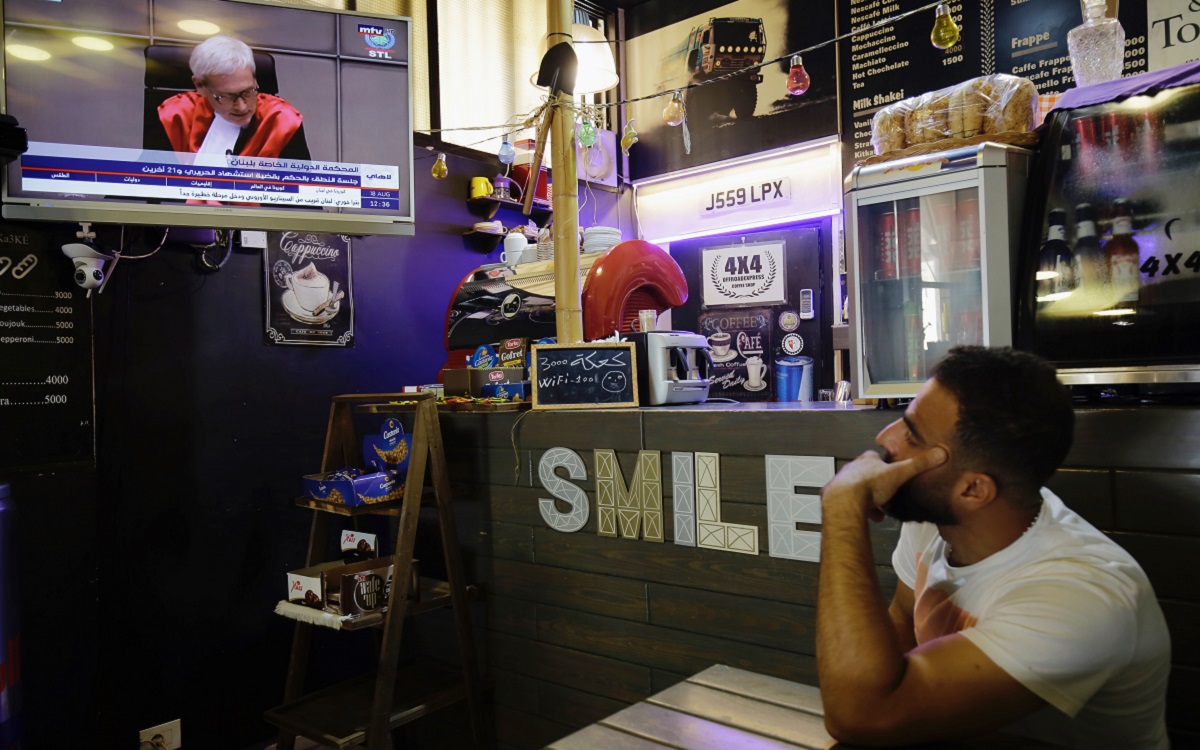 A Lebanese man watches the final verdict session of the Special Tribunal for Lebanon (STL) at a coffee shop in the northern port city of Tripoli, on August 18, 2020. Photo: Ibrahim Chalhoub, AFP.

Last week the Special Tribunal for Lebanon-STL, set up to bring justice for the murder of the former Prime Minister of Lebanon and 21 others killed on February 14, 2005,  sentenced in absentia two Hezbollah members to life imprisonment. Hassan Habib Merhi and Hussein Hassan Oneissi joined another senior Hezbollah operative Salim Ayash, who was sentenced back in December 2022.

Naturally, no one is under the delusion that these three killers, or their overlords, will serve their five concurrent life sentences. But what is perhaps disappointing is the lack of any reaction on the matter by the Lebanese at large, who simply decided that the ruling of the international tribunal, which Lebanon contributes 49 percent of its annual budget (over € 800 million over 15 years), should be left to oblivion.

The fact that the STL reconfirmed the obvious is no simple matter, nor something that should be ignored locally or by the international community. Hezbollah’s crack assassination unit commanded by the infamous Mustafa Badreddine, who later perished while fighting in Syria, plotted and carried out one of the biggest political assassinations in modern Lebanese history. Almost all the Lebanese, including those who support Hezbollah, are well aware of this fact. Hezbollah’s insolence went as far as to name a street after Hariri’s killer, Badreddine, and to accuse anyone who demands justice as an Israeli collaborator deserving of death.

The STL mandate, due to imprudent and unethical concessions by the Lebanese political elite, precludes holding any legal entity or group accountable for the crime, yet the real demand for justice should not only center on Badreddine and his band of murders. Rather, accountability should be demanded from  the entire militia which masquerades as a Lebanese political party, while in fact it merely pushes the Iranian Revolutionary Guards Corps world view and expansionist project.

Since it carried out the Hariri murder, Hezbollah, in unison with the Free Patriotic Movement and other allies, has systematically deconstructed the Lebanese state and maliciously drove the country into political and economic collapse. After 2016, the election of Michael Aoun, Hezbollah’s political fig leaf,  to president made possible by the consensus of the corrupt political establishment, drove the final nail in what remained of the Lebanese state. Since then, the pursuit of justice was no longer a public demand but rather a family affair left to Hariri’s son Saad, who proved extreme incompetence in its pursuit, as well as in partaking in governance.

Unless justice becomes part of its culture, Lebanon will never rise again, and this is hugely reliant on a local capable judiciary that will put an end to impunity.

It is quite understandable why the recent verdicts did not resonate with the Lebanese, who are busy trying to figure out a way to withdraw what remains of their bank deposits, squandered by the Lebanese government which, in complicity with the Lebanese banking sector, robbed them of their savings. For many, their silence is a way to get back at Rafik al-Hariri who they blame for setting up the Lebanese economic model which collapsed and left some begging for bread and medicine and others unable to live their past lavish lifestyle, which they could never afford.

In reality, this narrative has been endorsed by the entire political establishment which, rather than taking responsibility for their own decades of corruption and political incompetence, found it fit to blame the dead Hariri and place all the burden on his liberal economic project, a project which coincidently they all benefited from and directed towards growing their clientelist networks.

Hezbollah and the rest of the Lebanese political “elite” were wickedly able to bury the recent Hariri verdict by prioritizing the ongoing debate on the maritime demarcation and the conflict with Israel over the two disputed gas blocks as well as the formation of the next cabinet, which the ruling establishment claims are a first step towards economic recovery. Unfortunately, the Lebanese were quick to take this bait and to accept this deceitful narrative and, in the process, assured that their predicament will only become worse.

Regardless of what transpires over the next few months, it is certain that the current political and economic collapse started with the assassination of Hariri, and continued with the failure to deliver justice for his murder and the tens of other political assassinations, last of which was the killing of Lokman Slim.

Consequently, unless justice becomes part of its culture, Lebanon will never rise again, and this is hugely reliant on a local capable judiciary that will put an end to impunity. Until then, the blood of Hariri and the hundreds that perished in the Beirut Port explosion will haunt the Lebanese and remind them that justice and its pursuit is the pillar of statehood, something which Lebanon is lightyears from achieving.

Makram Rabah is the managing editor of NOW and a lecturer at the American University of Beirut, Department of History. His book Conflict on Mount Lebanon: The Druze, the Maronites and Collective Memory (Edinburgh University Press) cover collective identities and the Lebanese Civil War. He is on Twitter and on Instagram.