With Benjamin Netanyahu set to return as prime minister in Israel, his far-right coalition has the potential of creating widespread chaos throughout the region if they are able to fulfill their domestic goals. 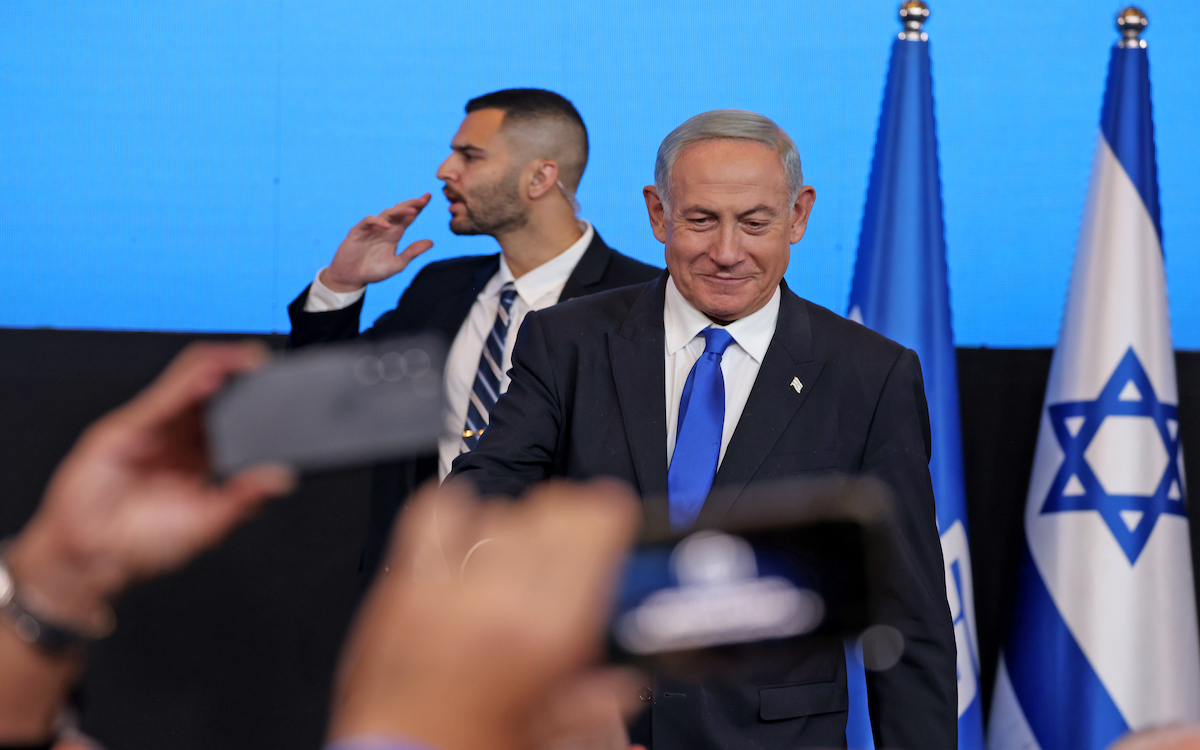 Israel's ex-premier and leader of the Likud party Benjamin Netanyahu addresses supporters at campaign headquarters in Jerusalem early on November 2, 2022, after the end of voting for national elections. Photo: Menahem Kahana, AFP

When Israel held its fifth election in four years on November 1, most polls showed that former Prime Minister Benjamin Netanyahu and his far-right coalition were going to be neck and neck with caretaker Prime Minister Yair Lapid’s more diverse and centrist coalition.

Some predicted that the country would be facing a sixth election at the start of 2023, as few thought that either side would be able to form a stable and cohesive government.

However, when the results were finalized a few days later, it was a hard win for Netanyahu.

Netanyahu and his coalition won a combined 64 seats in the Knesset, Israel’s legislative body, while Lapid and his group won just over 50. The former prime minister was given a clear path to return to power after around a year and a half in the opposition for the first time in over a decade.

What brought Netanyahu back to power, though, could serve as a destabilizing force for the entire region as the far-right parties in his coalition look to reshape Israel in a way that could have long-lasting domestic and international consequences.

“It depends on who gets which positions. but the results don’t bode well for stability in Israel or the broader Middle East,” Brian Katulis, senior fellow and vice president of policy at the Middle East Institute in Washington DC, told NOW. “A region of the world that is already experiencing a great deal of uncertainty is likely to see even more unpredictability to come on several fronts, including Israel’s ties with Palestine, Jordan and some of the Gulf countries.”

Though Netanyahu likely still needs several weeks before he is tasked with forming and announcing a new government,  it is expected to be the most right-wing government in Israel’s history.

The two largest parties in the coalition, besides Netanyahu’s Likud Party, are already demanding major roles and files in the next government.

Itamar Ben Gvir, the leader of the Jewish Power Party, has said that he wants to oversee the country’s police force, potentially giving him the power to give more freedom to Israel’s security forces when it comes to targeting Palestinians.

Ben Gvir has advocated for security forces to face no charges for shooting Palestinians.

Bezalel Smotrich, leader of the Religious Zionist Party, has said that he wants to head the Ministry of Defence, giving him exceptional power to command the country’s military and intelligence services.

“When it comes to domestic, internal politics, what is striking is that Netanyahu has been outflanked on his right, on his extreme right,” Karim Bitar, an associate professor of international relations at Saint Joesph University, told NOW. “That he has become, paradoxically and ironically, the moderate in this coalition because some members of this coalition are really beyond the pale ultra-right-wing, openly racist admirers of a serial killer like Baruch Goldstein, openly in favor of apartheid in maternity clinics separating Palestinian women from Israeli women.”

For the time being, it is unclear if they will in fact receive the ministries and portfolios that they are demanding, but given that they are the reason for Netanyahu’s return to power, he will almost assuredly have to give them some of what they want – or risk losing his hard-fought coalition and position as prime minister.

It seems likely that tensions with Palestinians might grow if hardline right-wing forces move the next Israeli government to take steps in Jerusalem that change the status quo at religious sites or the West Bank, such as annexation. Moves to further deepen the grip of the Israeli occupation would also provoke a backlash from the wider Arab world, including countries that have peace and normalization accords with Israel.

But even if the more extreme elements in the coalition are not given key ministries, their positions on what should be done with contentious issues – like the illegal settlements in the West Bank and the status quo of Jerusalem – could have far-reaching implications.

Jerusalem has long been a complicated city.

It is claimed by Muslims, Christians, and Jews as their own due to historical religious connections. Palestinians, regardless of religion, have called it home for generations.

Because of their own historical claims, some Israelis argue that Jerusalem belongs to them and that their right to the city was solidified when they annexed the eastern, Palestinian part following the 1967 war.

Since then, Jerusalem has been the site of numerous clashes and sparked a war between Hamas and Islamic Jihad in Gaza and Israel, who the two groups said were violating the city – in particular the al-Aqsa Mosque.

Many Palestinians still live in the city, albeit as second-class citizens, and claim it as the capital of their future state.

Areas like Sheikh Jarrah have seen Palestinian families forced from their homes, in which they have lived for generations, to make room for Jewish settlers coming from abroad.

The case of some families in Sheikh Jarrah remains in the Israeli courts.

The current situation in Jerusalem and its holy sites is anything but perfect, but the status quo provides a certain level of stability.

If Israel’s far-right continues to push to change the makeup of the city, conflict is sure to spark.

“It seems likely that tensions with Palestinians might grow if hardline right-wing forces move the next Israeli government to take steps in Jerusalem that change the status quo at religious sites or the West Bank, such as annexation,” Katulis stated. “Moves to further deepen the grip of the Israeli occupation would also provoke a backlash from the wider Arab world, including countries that have peace and normalization accords with Israel.”

This is something that Netanyahu is likely to try to avoid at all costs, no matter what his views might be.

“We are witnessing a continuing drift towards extreme right-wing racist nationalist ideology in Israel,” Bitar said. “This could have repercussions, of course, but, judging from his previous stints as head of government, Netanyahu is often very reluctant to start wars. He is a very shrewd politician.”

Israel has been one of the most outspoken countries against Iran and its nuclear program, with Netanyahu being at the forefront calling for international, specifically US, action against its Persian Gulf foe.

Netanyahu has repeatedly said that Israel will strike Iran militarily before it allows the country to develop a nuclear weapon.

After the Obama administration signed the nuclear deal in 2015, Netanyahu argued that it did not go far enough in curbing Iran’s ability to fund and support proxies in the region.

While the far-right elements in the new government might push for direct confrontation with Iran, even possibly escalating such actions, Netanyahu has much more to consider – in particular, Israel’s relations with its Gulf Arab allies.

“Netanyahu failed in his previous bids to stop Iran moving forward in its nuclear program, and Iran continues to engage in destabilizing actions across the region,” Katulis explained.

“Netanyahu is likely to be more vocal in his criticisms of Iran, and he will press the Biden administration to define a plan B on Iran, as the nuclear talks have not produced a new agreement. But Netanyahu’s actual policy options on Iran may be constrained by many factors, including deep concerns among several Gulf states about the risks of escalation with Iran.”

Even when it comes to Lebanon, Netanyahu might have his personal views, but he will try his best to avoid another war with Hezbollah, especially if it comes at the cost of Israel’s relationship with the United States.

While on the campaign trail, Netanyahu was openly critical of the maritime border agreement between Lebanon and Israel, arguing that Israel was capitulating to Hezbollah, and even going as far as to say that Lapid had no authority to make such an agreement.

He also promised to pull out of it should he be chosen to lead the next government.

Israeli leaders tend to make foreign policy decisions, including going to war, for domestic political reasons and they want to show that they are hawkish or ready to use force.

Despite his fiery rhetoric, both Katulis and Bitar believe that Netanyahu is all talk and was just trying to rile up his base before the election.

“Netanyahu will have to face the reality that Israel’s security establishment backs the deal and it has fairly broad support with the Israeli public,” Katulis stated. “In addition, pulling out of the deal could increase tensions with Lebanon. Such a move would create ill will with the Biden Administration, which invested a lot of diplomatic capital in the deal.”

Bitar added that no matter who is going to be the leader of the Israeli government, because the US invested so much into making this deal happen, the agreement “is now set in stone and will not be questioned.”

Netanyahu especially cannot afford to have a tense relationship with the US.

While Trump was nothing short of Netanyahu’s biggest fan, his predecessor, Barack Obama, was much more critical of the Israeli leader, especially following the signing of the nuclear deal.

Few doubt that the US will continue its unwavering support for Israel. But, if the new government starts taking actions that could upset the balance in the region and lead to further conflict, Katulis says that the “Biden administration will voice its disapproval if actions a new Israeli government that might upset the fragile regional security environment.”

“No one looks back on Obama’s second term as the glory days of US-Israel relations,” he explained.

“The forces that have worked to make US-Israel ties a partisan wedge issue in both countries’ politics aren’t helping the cause of peace and stability in the long run.  But if a new Netanyahu government takes steps that the Biden administration sees as increasing instability in the region, it will consider a range of measures to express disapproval.  It really depends on what happens.”

Netanyahu is likely to avoid actions such as refusing to recognize the maritime border agreement or escalating tensions with Hezbollah, as they are likely to upset the Biden administration.

Despite all of this, Israel’s new far-right government is going to cause waves that will ripple throughout the region.

According to Bitar, Israel does not really have much of a foreign policy, as it has often been defined by the prime minister’s domestic needs.

“Israeli leaders tend to make foreign policy decisions, including going to war, for domestic political reasons and they want to show that they are hawkish or ready to use force,” he said.

Even if Netanyahu recognizes the maritime border deal, it does not necessarily mean that he will hesitate to use force if his security credentials are questioned when it comes to Palestinian groups like the newly formed Palestinian resistance group the Lion’s Den, Hezbollah in Lebanon, or Iran.

Going forward, Katulis cautioned that the world and the region should “buckle up for more turbulence” in the coming year as the most far-right government in Israel’s history unveils its plans for the future.