The walls of the EU eastern flank

An x-ray of the European Union’s eastern borders and the Balkan migration policies tell a grim story of erected walls and populism. The EU needs to get more involved in solving the Lebanese and Syrian crises to have some partners in managing migration, in the absence of internal consensus. 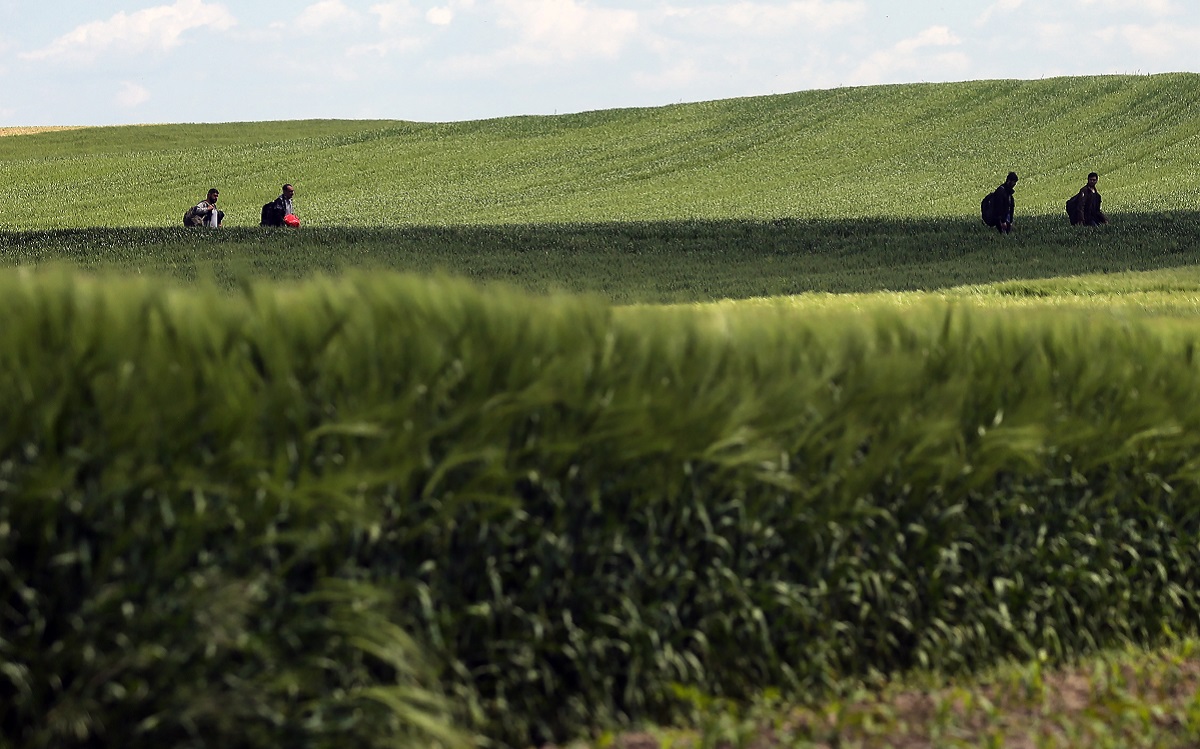 A group of migrants walk trough a field near the Serbian village Majdan, close to the Hungary and Romania borders, on May 21, 2021. Photo: Oliver Bunic, AFP.

I was on my way to our office in Beirut about a week and a half ago when, at a street corner, I overheard a conversation between two young men and their plan to leave Lebanon as soon as possible because “there is not future here”.

They were talking about maybe Belarus, maybe Greece. But then they both agreed that the Balkan route, through Serbia to Romania and then Hungary would be their best bet.

The debate on migration is quite incendiary if one looks at the European Commission and its troubles in getting southern Europeans like Italy and Greece to agree on a common asylum and immigration policy. But few people look at the policies of the eastern countries of the European bloc, where people fleeing disasters are also arriving in scores.

The Balkan countries, Romania and Bulgaria have been relatively quiet on the topic, hoping probably that the much more vocal Poland and Brussels’ issues with Belarus would steal the spotlight and attract the bulk of “migrants”.

But from the Balkans to Poland, all the eastern flank has securitized the situation: people are still dehumanized, arrested, sent to court for illegally crossing the border and eventually deported to the country they arrived from (not the country of origin). For the eastern states it is all a security issue, rather than a human rights issue and empathy for the strife in Syria or Afghanistan, or anywhere else for that matter, is close to null.

Poland’s parliament extended yesterday a state of emergency along the border with Belarus for another 60 days, despite people dying at the border and heavy criticism from human rights organizations and the European Union itself. The vote was aired on live television and a majority of the country’s legislative body, dominated by conservatives, voted in favor of the extension.

Since July, Poland has sent thousands of troops to the border, built a razor-wire fence, and implemented a state of emergency along the border area that bans journalists and charity workers.

Five migrants have died along the European Union’s eastern border with Belarus in the past two months.

Warsaw’s excuse for barricading itself is that it feels that Belarus has declared war on the EU in retaliation for the sanctions imposed after the brutal crackdown on the opposition. The weapon used by Minsk against the EU would be the “hoards” of Afghans seeking refuge in Europe, and Poland is caught in the middle. Interior Minister Mariusz Kaminski asked for an extension of the state of emergency, claiming the asylum seekers had links with “radical groups or criminals.” The core of the problem is, however, that Brussels wants to curb funding for Poland due to its breaches of rule of law in recent years, and migration is the conservatives’ negotiation leverage.

“The Polish border is sealed. BLR (Belarusian) authorities told you lies. Go back to Minsk!”

But people are dying in the process.

At the beginning of September, Amnesty International reported that 32 Afghans including four women, 27 men and a 15-year-old girl, had been held at the border between Belarus and Poland without adequate food and clean water for over three weeks, after being pushed back from Poland. On September 20, Amnesty released a digital investigation proving that the Polish border control pushed the asylum seekers back into Belarus.

The political bickering has left hundreds, if not thousands, of people hiding in forests along the border, and humanitarian workers carrying backpacks of food shouting through the woods in search for people who need help, both in getting food after their journey and with filing asylum paperwork.

But the government in Warsaw seems relentless. Tens of thousands of text messages were sent to foreign mobile phones along the country’s border with Belarus in a bid to target migrants and dissuade them from crossing.

“The Polish border is sealed. BLR (Belarusian) authorities told you lies. Go back to Minsk!,” read the English-language messages. The interior ministry said that last Tuesday alone it had sent nearly 31,000 messages to phones along the border.

In the Balkans, the Taliban takeover of Afghanistan has raised new fears that the 2015 migration crisis, when 1 million people fleeing war and poverty in the Middle East, especially Syria, arrived in the European Union (a bloc with a total population of about 440 million people).  The Balkan route has been seen ever since as the least dangerous for asylum seekers, as crossing borders on land is less of a risk than taking a trip on the sea from Turkey to Greece or from Syria/Lebanon to Cyprus.

Bulgaria announced on August 26 that it will bolster its border with Greece and Turkey with between 400 and 700 soldiers amid growing concern in Europe over an influx of migrants from Afghanistan.

Defense Minister Georgi Panayotov told the media that the troops would be available to help police and gendarmes with “constructing barriers and surveillance,” he added.

Although neighboring Greece and Turkey, both countries carrying the burden of hosting refugees and asylum seekers from Syria, Bulgaria only granted asylum to 885 people in 2019. On the migration route, Bulgaria has been detaining people in substandard camps and has been criticized over the treatment of refugees.

Scores of people try to cross the border between Romania and Hungary every day, hidden in trucks. Some are also caught trying to swim over the Danube from Serbia, others are captured simply trying to take a taxi to Hungary through a side road.

It also built a fence worth of EUR 85 million at the border with Turkey.

The Western Balkan countries, meanwhile, much like Turkey, have used Europe’s “migration crisis” and the Balkan route as leverage in their EU membership negotiations. A membership that Brussels doesn’t think is going to happen, as the bloc is mulling removing visa-free travel for their citizens.

A few weeks back, North Macedonia also warned that “migrants are coming” to the Balkan route.

Meanwhile, Serbia, which has been accused by the EU of simply letting people pass through on their way to Western Europe, is reportedly  hosting thousands of refugees who dream of reaching Austria, Germany, Italy, Spain and the Netherlands. Most of the time, their path takes them over the Danube, to Romania.

If you ask Romanians about migration, they will respond with an anecdote that has been circulating since 2015, when the first people tried to cross the country to reach Central Europe. Two Afghan refugees detained by the border police reportedly started crying when they found out that instead of Hungary, they had crossed from Serbia to Romania. Noone wants to stay here, Romanians say, half with relief, half with self-pity.

There are no warning messages, nor emergency situations declared when people arrive in Romania from Serbia or Bulgaria.

But scores of people try to cross the border between Romania and Hungary every day, hidden in trucks. Some are also caught trying to swim over the Danube from Serbia, others are captured simply trying to take a taxi to Hungary through a side road.

On September 30, the Romanian Border police reported it detained six Afghan asylum seekers while they were trying to cross the border into Hungary. A day before, during a routine patrol, 10 Afghans aged between 15-28 and a one-year-old baby were found after crossing to Romania with an inflatable boat from Serbia. They didn’t want to stay in Romania, they wanted to reach a state in Western Europe, the border police said. Usually, that country is Germany.

Two Afghan refugees detained by the border police reportedly started crying when they found out that instead of Hungary, they had crossed from Serbia to Romania. Noone wants to stay here, Romanians say, half with relief, half with self-pity.

On September 27, a Turkish lorry driver was detained after the Romanian and Hungarian border police detected 14 people – two Syrians and 12 Turkish citizens, including a 3-year-old – hidden in the cargo, among metal spare parts.

But these are the only the ones apprehended on a single border checkpoint between Romania and Hungary, during just three days.

What happens to people caught in the act: they are investigated and often tried for illegal border crossing. Some apply for asylum and make it through the process, others are deported back to Turkey, most of the time, or pushed back to Serbia, depending on where they embarked on the journey with the trafficker. Drivers or guides are investigated and charged with human trafficking.

Trafficking networks have even tried to use a potential Black Sea route to smuggle people into Romania and Bulgaria, and at least two of those overloaded boats were intercepted in 2017-2018 by the Romanian or Bulgarian Coast Guard. Some boats capsized in the Black Sea, killing scores. Nature put an end to that route, as the Black Sea’s currents have proven too strong and dangerous.

No way out of it

With the eastern states building walls and fences, sending troops to the borders and arresting and deporting migrants, with Central European states dominated by right-wing unfriendly governments, and the EU failing to draft a coherent asylum policy accepted by everyone, EU neighbors, including Lebanon, will continue to be a buffer zone for people fleeing wars and totalitarian regimes for years to come.

The solution to that problem is not only in Brussels. It is also in capitals that are seen as less powerful in the EU, where there is little understanding, empathy and interest for humanitarian issues outside their horizons.

The only thing the EU seems to be able to do so far is to send billions in humanitarian aid into Turkey, Lebanon and Jordan, hoping the issue would be solved someday. But that is also not the way.

It’s also in eastern EU countries where the idea of the Other needs to be normalized, and not only seen through historical traumas left behind by the Ottoman empire. It is obvious that the internal EU consensus on the issue is almost impossible, even beyond Italy’s staunch opposition.

The only thing the EU seems to be able to do so far is to send billions in humanitarian aid into Turkey, Lebanon and Jordan, hoping the issue would be solved someday. But that is also not the way.

Aid creates dependence, not development. Brussels needs to step up its foreign policy, take the Syrian file from the drawer, unblock what is blocked, and find political solutions to the crises in the Middle East that are driving millions to flee their countries. At the very least, the EU needs to make itself more visible at the political level, and that doesn’t mean communicating better on Twitter.

It means concrete policies and no dithering. Rebuilding Lebanon as a state, a functioning state, not a shack that tolerates corruption and armed groups, is not only France’s responsibility, as a former colonial power. It’s the entire EU bloc’s responsibility if they want to have reliable partners in managing migration.

The walls quietly erected on the EU’s eastern flank are not going to hold for too long, and we’re going to be back to 2015 with a human rights nightmare on everyone’s hands, and no coherent asylum policies. If that is even a concern for anyone, of course.