As one attempts to put the puzzle of the Lebanese fuel crisis together during an afternoon without electricity in a Beirut neighborhood, the major unknowns in the cluster foxtrot become apparent. 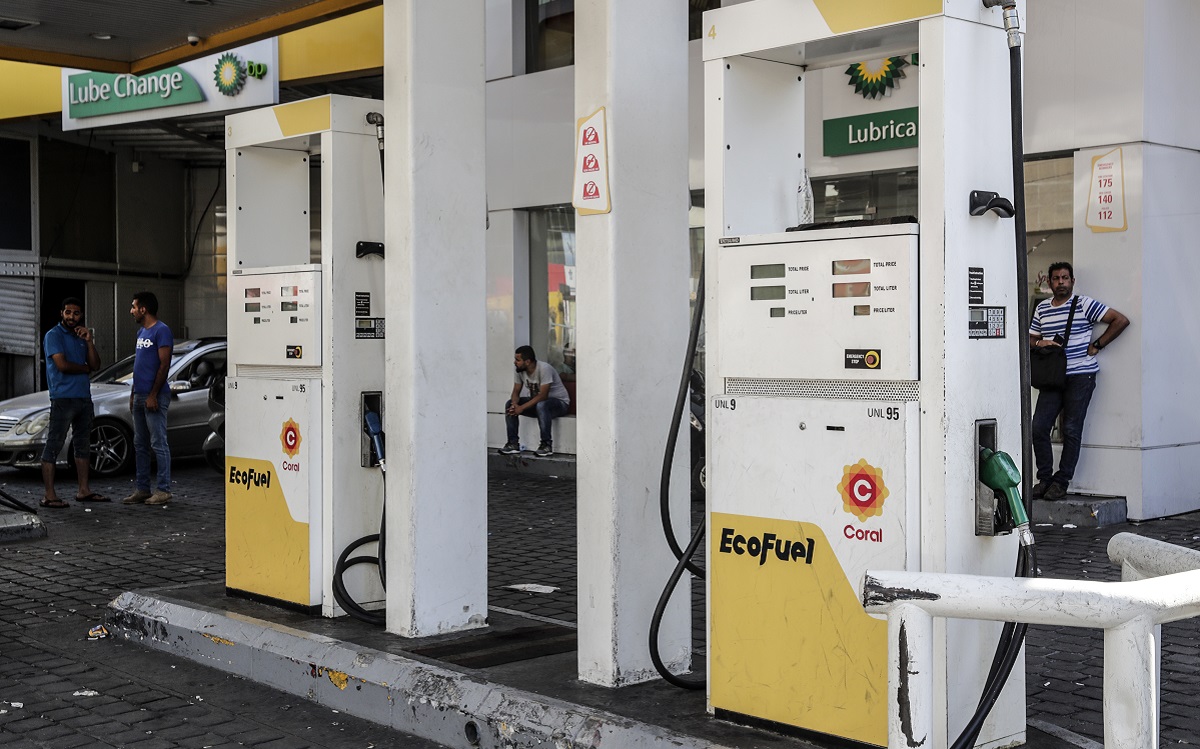 Coral, a key oil company in Lebanon said it would stop supplying its gas stations with fuel amid severe shortages that have brought the crisis-hit country to a halt. Photo: Anwar Amro, AFP.

Thursday. As any other day, the neighborhood generator goes off from 11 am until sometimes 1 pm, sometimes 2 pm.

Some roads across the country were blocked with trash bins, some with rocks, and some with just cars obstructed by angry motorists. The news comes on the mobile phone, intermittently, as the 3G signal, which has replaced the $G we once had, fades out and fades back in.

Since Monday, my alley has been partially blocked by a long line of cars waiting to fill tanks at the petrol station at the end of the street. Miraculously, it opened on Monday, although it had been closed since the beginning of the summer.

Some gas stations have closed indefinitely. Coral, one of the biggest fuel distributors in the country “apologized” for not being able to supply fuel to the petrol stations.

Funny word this “apologize”. No one “quits”, no one throws in the towel, they all “apologize”. “It’s beyond my control,” is the message that implicitly comes through. To quit is much too harsh and it implies that one takes responsibility for their failure. Apologizing means often that the fault is none of the speaker’s fault.

So Coral apologized. The underlying message was, as usual, to be read between the lines of the statement, because at this time of crisis we have nothing else to do but debunk metaphors and vague statements. The fault was with the government.

The company also said that it has imported a gasoline tanker, but the ship has been parked in Lebanese territorial waters since August 11 because the “government did not come through with its promises”.

Since Monday, my alley has been partially blocked by a long line of cars waiting to fill tanks at the petrol station at the end of the street. Miraculously, it opened on Monday, although it had been closed since the beginning of the summer.

The promises? Well, complying with lifting the subsidies and allowing fuel imports at the dollar market exchange rate, about 20,000 LBP, of course.

The Lebanese central bank announced it lifted subsidies for fuel on August 11, but its decision raised opposition from most Lebanese politicians, including President Michel Aoun, and has not yet been implemented. It just triggered a lot of panic and insecurity and protests and unrest in general.

The Central Bank decision, not coordinated with government policies to alleviate the effect of the vulnerable population, was set to throw everyone into poverty.

There is this other funny idiom on everyone’s lips recently. Social explosion. It sounds like a cataclysm of cosmic proportions that is imminent of swallowing Lebanon whole. A sort of personified nothing turning the country to dust, unless a solution is found. In fact, it’s extreme social exclusion, groups in society becoming increasingly marginalized and rising to ask for their rights. It’s already happened. To no avail.

Regardless of the social explosion, there is still no fuel. Fuel importers don’t want to sell at 3,900 exchange rate anymore. They know they will never get their money back. They buy at the market rate, but they have to sell at the 3,900 rate. The difference that is supposed to be provided by the state, they may never see.

So they sit on the stash of fuel waiting for the subsidies to be lifted, or they refuse to unload the ships, like Coral.

The deepening fuel crisis has triggered intensive raids by the Lebanese Army on illegal depots and petrol stations accused of stockpiling subsidized fuel in order to redistribute to hospitals and vital industries.

But suddenly, last week, the big fish started to show up and not only in border areas, but also in coastal illegal depots, including in Amchit, north of Byblos.

No arrests have been reported either.

However, the fuel crisis and the manner the government dealt with the shortages, have already had deadly consequences. On Sunday morning, at 2 am, a tanker confiscated by the Lebanese Army in the village of Tleil, northern region of Akkar exploded as desperate villagers were gathering to obtain fuel. At least 28 people, including soldiers, died on the spot, another 79 were left with heavy burns, and several are  still missing.

The circumstances of the explosion remain unclear, although villagers have told journalists that the owner of the illegal depot may have shot at the crowd and may have cause the fire. Investigation ongoing, no info released.

But knowing the region and how family networks function in North Lebanon, especially when poverty hits and people become desperate, there must have been a reason why fuel was being distributed at 2 am on a Sunday.

Funny word this “apologize”. No one “quits”, no one throws in the towel, they all “apologize”. “It’s beyond my control,” is the message that implicitly comes through.

Some of the victims of the blast that has shaken the country were buried on Wednesday in Akkar. Four of the victims were from the same family. Two of them were soldiers.

The bottom line of the “social explosion” is that, in the absence of a coherent state, people will rely on other people, especially on family and friends, to survive. In the absence of the state, people have always found a way to put a network of support in place and fill the void with some sort of authority they can forge a social contract with. Be it mafia networks, tribal networks or a combination of both.

Meanwhile, politicians quarrel over the constitution and who has the right to do what in the current crisis, keeping the conversation political rather than coming up with policies. The government push and pull continues.

Naturally, the problem is not that Lebanon does not have enough specialists who would be able to put together viable policies. So far, the government program and the reforms remain in PM-designate Mikati’s mind. No one has put anything on paper.

Meanwhile, President Aoun sent another letter to the parliament and Speaker Nabih Berri called for a session on Friday of the Lebanese legislative body to read it out loud and discuss the current fuel crisis.

But we’re still on Thursday, and tomorrow is another day. And on Thursday, an Iranian tanker may or may not be on its way to save us all from complete darkness.

Hezbollah chief Hasan Nasrallah never apologizes. He comes up with solutions in times of crisis. Most of the time, the solutions involve Iran.

Not that Iran has ever exerted or attempted at exerting any type of hegemony over Lebanon, he says.  Tehran has never interfered with Lebanese domestic politics, only with its foreign policy. Hezbollah fighting in Syria was probably none of Lebanon’s business and the weapons shipped to Hezbollah were cultural exchanges and a form of soft power.

Of course, his solutions come with some strings attached, but Lebanon is in dire straits, who cares about a few things like allowing a heavily armed militia that has been weakening the state for decades to break international embargoes, throwing the whole country into the black list when it needs international support?

Details. The important part is that we will have power for generators, he says.

He has been threatening for a while – literally in every speech held since June- that he would take matters into his own hands and bring in fuel from Iran to save the country from darkness. If only the entire Lebanese state would rally behind him and break international embargoes and sanctions, putting the entire country’s population at risk.

The bottom line of the “social explosion” is that, in the absence of a coherent state, people will rely on other people, especially on family and friends, to survive. In the absence of the state, people have always found a way to put a network of support in place and fill the void with some sort of authority they can forge a social contract with.

Nothing had happened until Thursday. He said he needed that go ahead of the Lebanese state.

But in his speech on Thursday, on the occasion of the Ashura commemoration, Nasrallah put any declarative concern for the Lebanese state aside and announced that Hezbollah had indeed taken matters into its own hands and an Iranian fuel tanker was to set out for Lebanon “within hours”.

He also declared it, unilaterally of course, Lebanese territory, thus warning US and Israel: attack it, or else.

Some questions have been left unanswered.

What was the deal with Iran? Did Iran donate the fuel? Did Hezbollah negotiate a price? How will Hezbollah distribute the fuel if the Lebanese government doesn’t accept it?

He said a first ship would bring fuel for “hospitals, manufacturers of medicine and food, as well as bakeries and private generators.” Why not the state electricity company and its power plants? Would it be delivered to North Lebanon too?

He said more vessels would follow to address shortages that have ground Lebanon to a halt. Iran, however, has said nothing of the matter so far and although Press TV reported what Nasrallah said about thanking Iran for everything it has done for Lebanon in the past years, including not interfering with domestic business, the Iranian government has made no statement on whether it did or did not send fuel to Lebanon.

But as the generator kicks off again in my neighborhood in Beirut and my internet connection is back on, I read energy expert Laury Haytanyan’s warnings across news agencies.

“It is a possibility that these tankers will go to Syria and shipments will be refined there,” Haytayan said. “But this is all prohibited by sanctions, it’s not that easy, and since Hezbollah is doing it in public, there is a lot of danger on Lebanon, we are in danger of being sanctioned, or being attacked.”

Who said this country is lacking competent people who can come up with proper policies? Just let them.

Ana Maria Luca is @NOW_leb managing editor. She is on Twitter @AnaMariaLuca79.