As political deadlock brews across Iran’s sphere of influence, Tehran will have to first and foremost deal with the protest movement that has erupted due to the death of Mahsa Amini before it can fully manage challenges in Lebanon and Iraq. 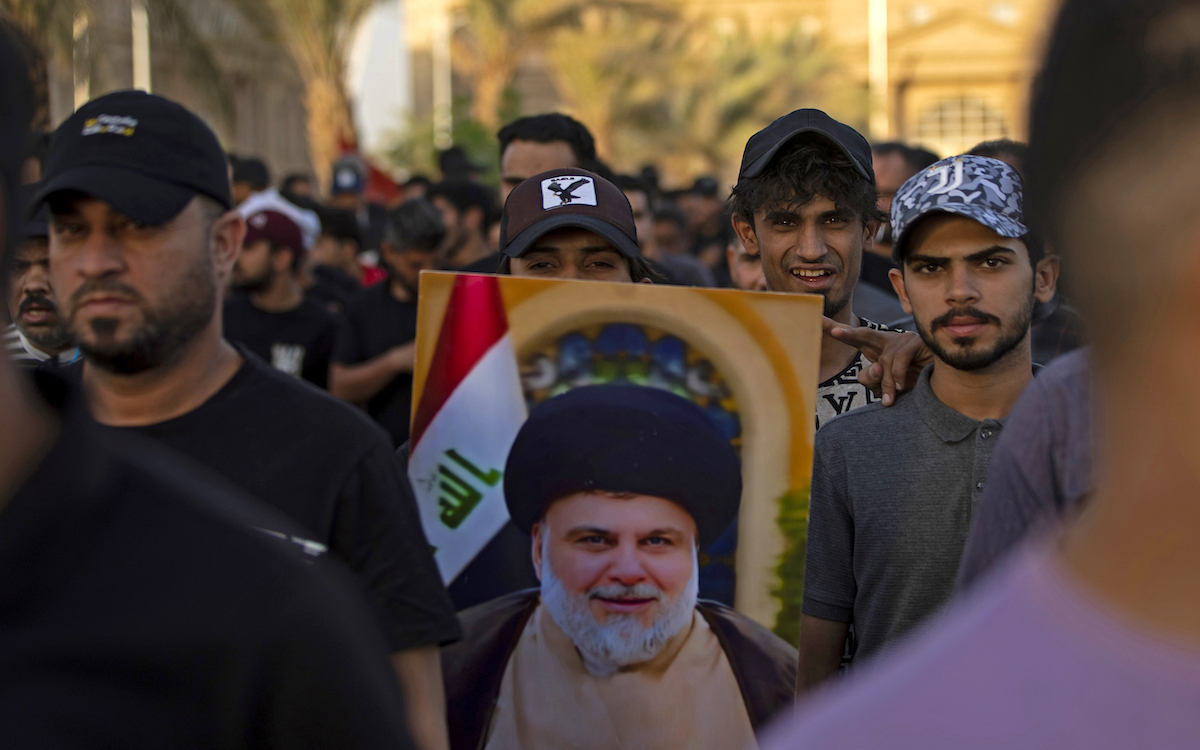 Supporters of Shiite Muslim cleric Moqtada Sadr take part in a protest outside the local administration building in the southern city of Basra on September 28, 2022. Three rockets were fired at Baghdad's Green Zone, wounding seven security force personnel as parliament was holding its first session in two months, Iraq's security forces said. The parliament, at the centre of a months-long political paralysis, met for the first since deadly unrest in August to vote on the resignation of its speaker. Photo: Hussein Faleh, AFP

In recent weeks, the situation in Iraq has been in a state of flux.

The political conflict between Muqtada al-Sadr and the Iran-backed Coordination Framework Alliance (CFA) spilled out into the streets last month as Sadr’s supporters and militia clashed with Iraqi security forces and the Iran-backed Popular Mobilization Units (PMU).

After weeks of calm, the situation in Baghdad, as well as other parts of the country, has again escalated, with skirmishes between Sadr’s supporters and Iraqi security forces in the Green Zone and Iranian shelling of Kurdish opposition groups in the north in response to the current protests across Iran.

Needless to say, the Iranian sphere of influence is being challenged by both internal and external difficulties.

Outside of turmoil in Iraq and Iran, Tehran must also focus on Lebanon as the Lebanese government approaches a deal with Israel regarding the maritime border and the parliament begins to decide on a new president to take over from Michel Aoun.

As the protests across Iran continue, Tehran is in a tricky situation as its attempts to manage domestic and regional challenges to its authority.

A new wave of protests and external action

On September 13, Iran’s morality police arrested Mahsa Amini, a 22-year-old from the northwestern Kurdish city of Saqez, in Tehran for “unsuitable attire.”

She died three days later in hospital after falling into a coma, sparking protests against the Iranian government and its strict legal codes pertaining to women.

The protests quickly spread across the country and have become some of the largest in recent memory.

The government has imposed an internet blackout and assaulted protesters, but the opposition has held strong nonetheless.

Given Amini’s background, Kurdish protesters in Iran’s northwest have agitated against the government, prompting support from the Democratic Party of Iranian Kurdistan (KDPI), an armed Kurdish group that has fought the Iranian government on and off for years.

This support then led to the Iranian government attacking northern Iraq, where the KDPI is based in exile.

As many as 13 people were killed and 58 injured in the Iranian strikes on the KDPI’s military bases.

As the government falters under intense protests, it has thus decided that it must exert itself in a show of force. Outside of cracking down on the protests in Iran, shelling northern Iraq sends a clear message that any resistance to the Iranian government will be dealt with mercilessly.

It is also a message to foreign observers not to get involved in the protest movements, especially considering that the US and Israel have both voiced their support for the protesters.

Considering that the US has a presence in northern Iraq, and Iran has targeted US installations in the area in response to Israeli airstrikes in Syria like it did this past March, it seems likely that Iran wants to signal to the US that it can escalate in the area if it feels that the US is interfering in its domestic politics.

The Iranian sphere of influence

For the past decade, the notion that Iran possesses a sphere of influence that stretches from Tehran to Beirut has gained traction, especially considering Iran’s intervention in both the Syrian and Iraqi civil wars.

However, the said sphere of influence does not exist without opposition.

In Lebanon, Iran must manage Hezbollah’s conflict with Israel while also maneuvering around Lebanon’s contentious and convoluted politics.

In Syria, Iran must deal with Turkey and the US as it tries to expand the Syrian government’s influence in areas outside of its control, while also making sure that said government does not collapse.

Lebanon and Syria, however, are still manageable, at least when compared to the situation in Baghdad.

Not only does Sadr pose a political and military threat, but also an ideological threat, as his movement is both Shiite and Islamist, much like Iran’s government.

This threat became glaringly apparent when Sadr’s supporters stormed the Green Zone, and, after weeks of protest, his militia, Saraya al-Salam, entered Baghdad and clashed with Iran-backed groups.

Though Sadr’s forces ultimately withdrew from the capital, the deadlock has persisted, with Sadr’s supporters again storming the Green Zone this week to protest the resignation of Iraq’s Speaker of Parliament Mohammed al-Halbousi.

The Iran-backed parties of the CFA may still be in a strong position, as Sadr’s bloc in parliament resigned in June and has lost ground, but Sadr still possesses the popular support of many in Iraq’s Shiite majority.

Iran seems to be experiencing the problems that any expansionist power is doomed to face: unrest across an over-stretched empire.

Before Tehran can fully address its regional challenges, primarily in Lebanon and Iraq, it will have to deal with the protest movement.

Though the media have alluded to the potential collapse of the Iranian government, such an outcome is rather unlikely.

Iran happens to be one of those countries in which its population tends to protest, but without an external supply of weapons or large-scale defections within the security apparatus, it is unlikely such protests will truly challenge the government’s survival.

However, they still pose a serious threat and make Tehran look weak to its adversaries.

Perhaps the government will impose a mixed strategy, loosening some restrictions while also continuing its crackdown on the protests.

Once that outcome is achieved, Tehran can then better address its regional challenges.

Though an uphill battle in many ways, ultimately, Iran can deal with Lebanon and its political dysfunction.

Sadr will be a far more difficult obstacle.

There is certainly trouble within Iran’s sphere of influence, but Iran can likely manage the situation as long as it quells internal unrest.

If not, then Tehran may have to seriously consider if it has overplayed its hand.