Ronnie Chatah discusses Lebanon’s various pressure fronts, from the newly established government, to the opposition and beyond, and sheds light on why the international community’s focus on ‘stability’ isn’t as appealing as it sounds. 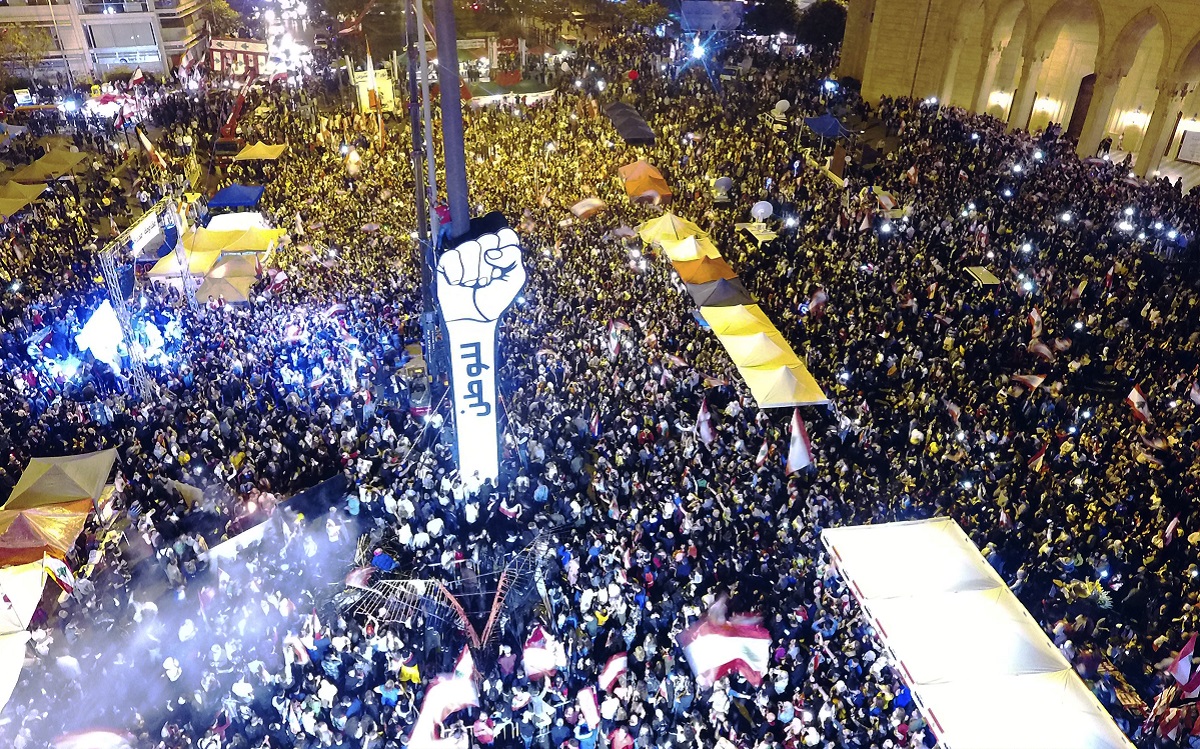 "I have my limits, and I consider advocates of political violence less political and more criminal. But my sentiments are with October 17, and I have no appetite for the status quo that defined our collapse." Photo: AFP.

Belated is far too kind. Overdue is equally generous.

There is no adequate way to describe the consequences of decades-long ineptitude, corrupt governance and prolonged paralysis. But in late 2021, those currently holding and others aspiring to reach positions of power equally feel the burden of the population at their doorstep.

And that includes the proxy.

I am fortunate (if that is the right word) to have access to new faces within the current lineup. Some of them through mutual acquaintance, others including a chance encounter that turned into several hours of exchange, as well as a former guest on the podcast. There are reform-minded ministers in our recently formed government, and that is a fact. What is equally true is that they are not politicians, or politically minded.

On the contrary, they deliberately sidestep the foundational flaws of trying to repair a broken state while a sub-state sponsored army dictates the terms of reform – rather, they limit their tasks to avoid our security paradigm, and I think they are desperately trying to do their jobs against the odds.

I would extend this description (albeit with glaring caveats) to the usual suspects. This is not to praise them in any way for their tears on television screens, nor to sympathise with their inability to dine at restaurants, nor their endless work hours and sleepless nights – it is, in fact, good to see their tired eyes glare, or catch themselves on Instagram posts that monitor their every move. I am only highlighting that they feel wrath they have not felt before.

Assuming other countries’ demands for concerted pressure wins over, European-backed sanctions could be used to ensure, for example, that Tarek Bitar’s investigation carries through despite its current suspension and irrespective of further caretaker governments.

On the one hand, from the majority of citizens who no longer buy into their familiar sectarian and ill-conceived conspiratorial excuses for not doing anything (if they fail today, whether entirely fair or not, the blame is on them). On the other, US-backed sanctions that tarnished the reputation of select politicians once considered immune to scrutiny, compounded by a sluggish and consensus-driven framework for European Union sanctions emanating from Brussels.

This may be a threat, only – certain member states (i.e. France) seem to be content with government formation alone. Assuming other countries’ demands for concerted pressure wins over, European-backed sanctions could be used to ensure, for example, that Tarek Bitar’s investigation carries through despite its current suspension and irrespective of further caretaker governments. Or for that matter, leveraging against the elections’ potential postponement should the regime pursue that option.

Regardless, this newer cabinet and older parliament is under everyone’s radar, and that is a positive and unusual development in Lebanese politics.

A member (and friend) of an established political party recently whispered in my ear that I am among the few that garners respect from the ‘revolutionary crowd’ and can comfortably converse with the ruling class.

Talk about pressure…I disagreed on three points – my voice is not nearly loud enough to earn that authority; my podcast and this platform have obvious limitations in language and audience; and most importantly, while I reach out to all in the opposition and disagree on key issues with sincerity, I do not speak to everyone in the regime.

I have my limits, and I consider advocates of political violence less political and more criminal. But my sentiments are with October 17, and I have no appetite for the status quo that defined our collapse.

Many opposition figures that have grown to prominence are previous guests on the podcast. Their goals and aspirations continue to resonate, and I truly admire their principles and passion. The pressure on their pursuits, however, is insurmountable.

They are up against well-established political parties, some dating back to pre-independence years, with diaspora offices that span the globe. There are obvious obstacles and challenges that no new party can tackle on their own, and the required political maturity is confined to a narrow window of time.

Tempering Hezbollah’s footprint in Lebanon without reinstituting the foundation that was once Lebanon’s wobbly yet sovereign control over its destiny means one thing – a return of Syrian influence.

Those that are coalition-minded and more willing to communicate with former regime parties sharing their aspirations are likely to see gains in next year’s elections.

As for the revolutionary left still unwilling to extend their hand, their numbers may not shine. The reactionary right, however, despite an inherent inability to make new friends within October 17’s burgeoning groups, seem destined to pick up seats from Baabda’s movement’s dramatically decreased flare. If a larger opposition is formed following next year’s elections, all these parties, collectively – despite their known disagreements – will be forced to work together.

And the immeasurable challenges they all face, from a regional security threat that cannot be solved domestically, must be tempered to allow for long-lasting reform.

All signs are pointing in one direction: stability.

That word sounds positive in light of instability and war, sending signals of reassurance and comfort when measured against perpetual crisis and familiar pain. But in my own estimation, that word is the death knell to political reform.

I say this, resoundingly, because tempering Hezbollah’s footprint in Lebanon without reinstituting the foundation that was once Lebanon’s wobbly yet sovereign control over its destiny means one thing – a return of Syrian influence.

This does not mean the Assad regime’s intelligence and army units crossing the border and reoccupying Lebanon as they did from 1976-2005. That is too remote and unlikely to consider.

Instead, it would manifest as a Russian-backed Syrian regime with oversight over Lebanon’s security concerns and foreign policy positions. And that trickles down to what the limits of functional governance look like, reminiscent of reform-minded individuals that emerged in the 1990s and early 2000s and were forced to scale back their mission.

Even if the port blast investigation is stalled with another replacement judge, and eventually ends without any official answers, Bitar’s sincere and thus far unyielding attempts have already made it clear which group demands impunity for its security.

Add to that Assad’s former friends in Lebanon are repositioning themselves for power, speaking positively of the Syrian regime’s secularist persuasion (whatever that means), ignoring the catastrophe it brought to Syria and Lebanon, and openly supporting Assad’s desire to reintegrate into the region.

Where is the pressure here? I am not privy to any behind-the-scenes diplomacy between Saudi Arabia and Iran (I am not sure if Rob Malley, himself, knows their full extent), what the French…no, more precisely, what Macron is really thinking when he opts to communicate with Raisi over our domestic affairs, or how far the Biden administration is willing to accept Syrian dominion, despite the green light given when Assad’s father cemented his occupation of Lebanon in 1989.

What I do know is that there is pressure on all actors to ensure Lebanon stabilizes. From the more recent and first official visit in decades of our current prime minister to Amman, stemming from a complicated, but so far sticking, World Bank sponsored deal including Egyptian gas and Jordanian power supply circumventing Syrian sanctions. To this summer’s diplomatic regional tour that included the US and French ambassadors’ visits to regional capitals. Even Iran is sending fuel via Syria to Hezbollah – a different ‘lifeline’ that circumvents the state, but one Hezbollah needs to alleviate the shared pain felt by all Lebanese that inherently includes their own base.

The proxy & the probe

Hezbollah also finds itself under the radar. And with good reason.

Against immense public outrage and in full view, the proxy repeatedly condemns the port blast investigation, from judges Fadi Sawan to Tarek Bitar, and recently sent threatening messages pushing for Bitar’s resignation. That the investigation has been suspended once more exposes the group to further scrutiny and accusation, a situation they clearly prefer to avoid. But the pressure is on them to end probes into their allies’ and nominal opponents’ knowledge of the ammonium nitrate storage dump, and they are on the offensive, including tomorrow’s scheduled protests at the Justice Palace against so-called ‘politicization’ of Bitar’s mission.

Even if the port blast investigation is stalled with another replacement judge, and eventually ends without any official answers, Bitar’s sincere and thus far unyielding attempts have already made it clear which group demands impunity for its security. He gave us the answers that we who turn to common sense and logic over wishful thinking and conspiracy already knew. And he did his job within a system designed to ensure Hezbollah’s security apparatus survives as Lebanon dies.

And as the standoff intensifies, he will go down in history as an honest and brave judge who shed light on the reasons all of us, for the same reason, are under pressure.