As tensions continue to rise on the Ukrainian eastern border, analysts say that Russia’s involvement in Syria may be an ace up Moscow’s sleeve when negotiating with the West. 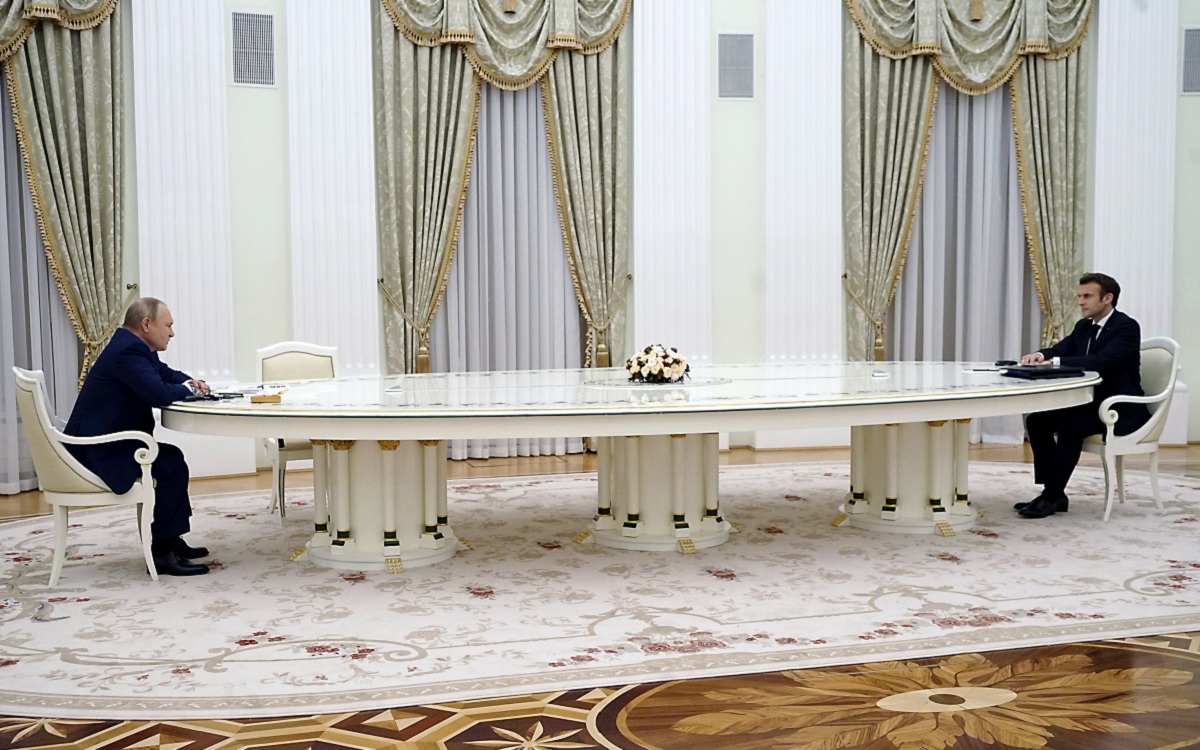 French President Emmanuel Macron (R) meets with Russian President Vladimir Putin (L) in Moscow on February 7, 2022, for talks in an effort to find common ground on Ukraine and NATO, at the start of a week of intense diplomacy over fears Russia is preparing an invasion of its pro-Western neighbor. Photo: Sputnik / AFP.

Russia’s current buildup on the borders of Ukraine began in the spring of 2021 and accelerated into the winter.

In recent months, U.S. intelligence sources have continually indicated that renewed conflict in Ukraine is imminent. However, it is still unclear to many whether Russia will launch an operation to capture new territory.

Renewed conflict in Ukraine could have serious repercussions for Europe and the Middle East, as it is both a transit country for natural gas and a trading partner for multiple Middle Eastern countries, analysts say.

Russia first intervened in Ukraine in 2014 following the Maidan revolution, which ousted the pro-Russia Viktor Yanukovich. In response, Russia swiftly annexed Crimea, with Russian-backed rebels seizing territory across eastern Ukraine. The Ukrainian military launched a counter-offensive that managed to route the rebels, but Russia retaliated with a full-scale invasion. By the end of the winter of 2015, the frontline in eastern Ukraine stabilized, and the situation has been a stalemate since.

After the onset of hostilities in Ukraine, Russia’s geopolitical calculus changed and Vladimir Putin decided to expand Russia’s military commitments, especially in the Middle East and Africa. The first step in this reorientation was a direct military intervention in Syria that occurred soon after the situation in Ukraine stabilized.

Foreign policy analysts say it is crucial to view Ukraine and Syria as two connected theaters of conflict where Russia plays with pressure points to reassert its role as a global power.

Russia’s role in Syria is a multi-faceted long-term commitment to keep the regime under Bashar al-Assad in power. Putin may quietly prefer a different leader, but overall, Russia is sticking with the Assad family and its figurehead, Bashar, at least for now. Both Russia and Iran have tried to move proxies to the core of the regime, but this has not yielded any tangible results, as al-Assad constantly rotates loyalists through the leadership of the security services, sidelining potential threats.

Newlines Institute’s Nicholas A. Heras told NOW that Russia is primarily focused on consolidating long-term basing in Syria. Russia has an important naval facility in Tartus, an important airbase in Latakia, and a major forward operating presence in Qamishli and Deir al-Zour in eastern Syria. Russia also has air assets, special forces, military police, and forces that train regime soldiers.

“Syria has been a strategic area of focus for Russia since the Cold War, and under Putin’s leadership, Syria is being set up to be a major site for the projection of Russian power in the Mediterranean and the Middle East,” he explained.

Additionally, Russia uses its Latakia airbase as a logistical hub for its operations in Libya, the Central African Republic, and Sudan, among others.

The airbase is also used to launch regular airstrikes against targets in rebel-held Idlib, which is controlled by Hay’at Tahrir al-Sham (HTS). The Russian air force launches additional airstrikes in the Badia desert, where the Islamic State is still active, but not as frequently as in Idlib. These desert strikes do not necessarily originate from Latakia, as Russia has access to other air bases in Syria.

Geopolitical events do not happen in a vacuum, and this is especially the case when analyzing Russia’s actions in Ukraine and Syria. Russia’s intervention in Syria was driven by both events on the ground and larger geopolitical changes.

The Syrian government lost multiple strategic areas in 2015 to a variety of military forces. Rebel coalitions made serious gains in northwestern and southern Syria, while the Islamic State captured most of the Badia desert, threatening Damascus and Homs. The government was not beaten, but without Russian airpower, it would have been impossible to recapture these areas.

Regarding larger geopolitical events, Putin felt that Russia was losing its global standing, and he saw the need to assert Russia’s importance in global affairs.

Hanna Shelest, the Security Studies Program Director at Kiev-based Ukrainian Prism, told NOW that Russia was excluded from the G7 and from other serious negotiations because of sanctions following the annexation of Crimea in 2014.

“They needed to return to big negotiations. Syria was exactly that place, but to be involved there, they needed to intervene,” she explained.

Russian military campaign in Ukraine would require a significant share of assets and could also devolve into fighting a NATO-backed insurgency. Russia needs Syria to be a low-intensity conflict in order to commit to Ukraine.

In the six or so years since Russia’s intervention in Syria, Russian forces have deployed to Libya, the Central African Republic, Sudan, and other countries across Africa.

But the dynamic between Ukraine and Syria is an important aspect in Russia’s calculus, as they are Russia’s largest external military commitments.

Heras told NOW that Russia would only feel confident that it could escalate in Ukraine if it had a stable and resilient force present in Syria.

“A Russian military campaign in Ukraine would require a significant share of assets and could also devolve into fighting a NATO-backed insurgency. Russia needs Syria to be a low intensity conflict in order to commit to Ukraine,” he pointed out.

Ukraine and Russia’s allies and adversaries

Russia and Ukraine both have dynamic relationships with a number of countries in the Middle East, most importantly with Turkey and Israel. Turkey and Russia are on opposing sides of almost every conflict in the region, while Israel and Russia have a less-tenuous relationship in that sense.

“Turkey and Israel are two different stories. Turkey has been a strategic partner of Ukraine for the past eight years… They try to balance between Ukraine and Russia as much as possible… [But] for the last year it became a little more difficult… Turkey will try not to provoke the Russian Federation, but at the same time, they are not the country that will betray Ukraine,” Shellest said.

But Israel’s case, she explained, is more complicated. On the one hand, Israel has very good relations with both Ukraine and Russia, but also with the United States. Personal politics in Israel is also a factor influencing relations with both Ukraine and Russia. A number of Israeli politicians have personal ties to Russia and “are trying to limit support for Ukraine,” she pointed out.

“But at the same time, Israel is completely supporting the territorial integrity of Ukraine… It’s just that they are not supporting Ukraine maybe in the way that we wanted.”

Israel and Turkey do not want to have antagonistic relations with Russia because the Russians can apply significant pressure on both countries through military means, Heras also elaborated. Turkey provided the Ukrainian military with drones last year, but there are limits to that relationship, as Ankara does not want to upset Moscow too much. And the reason is Syria.

“Russia can certainly escalate an air campaign in Idlib to create displacement of millions of Syrians toward Turkey, to destabilize NATO’s southern flank at the same time that it wages a military campaign in Ukraine.”

Though such an option seems brutal, refugees have already been used as political pawns in Syria and elsewhere. Most recently, Belarus, a strong Russian ally, facilitated a refugee crisis on its border with Poland and the Baltic states to put pressure on the European Union.

“I really hope that they would not go that far as threatening the lives of people just to destroy the position of Turkey. Unfortunately, after eight years of war, I cannot dismiss this option,” Shellest pointed out.

Outside of Israel and Turkey, Ukraine is an important trading partner with a number of Middle Eastern countries, especially the Gulf states, and renewed conflict could interdict critical trade routes, she said.

“Ukraine is the food security guarantor for many countries. If Russia blocks Ukrainian ports, 70 percent of our exports go through ports… the effects will not only be for Ukraine.”

Middle Eastern countries are in a tough position, as many have good relations with both Russia and Ukraine, and it is still unclear if a Russian military operation will occur or not.

Renewed conflict in eastern Ukraine could have unforeseen consequences in Syria, as Russia may look to put pressure on Turkey and NATO via increased airstrikes near the Turkish border. For now, it is up to the United States, NATO and Ukraine to reach some sort of agreement that hopefully can prevent the onset of serious hostilities.