With elections in Turkey quickly approaching, Ankara seeks to stabilize the situation in the areas of northern Syria and to return Syrian refugees to areas under its control by allowing HTS to expand its influence in Turkish-controled areas. 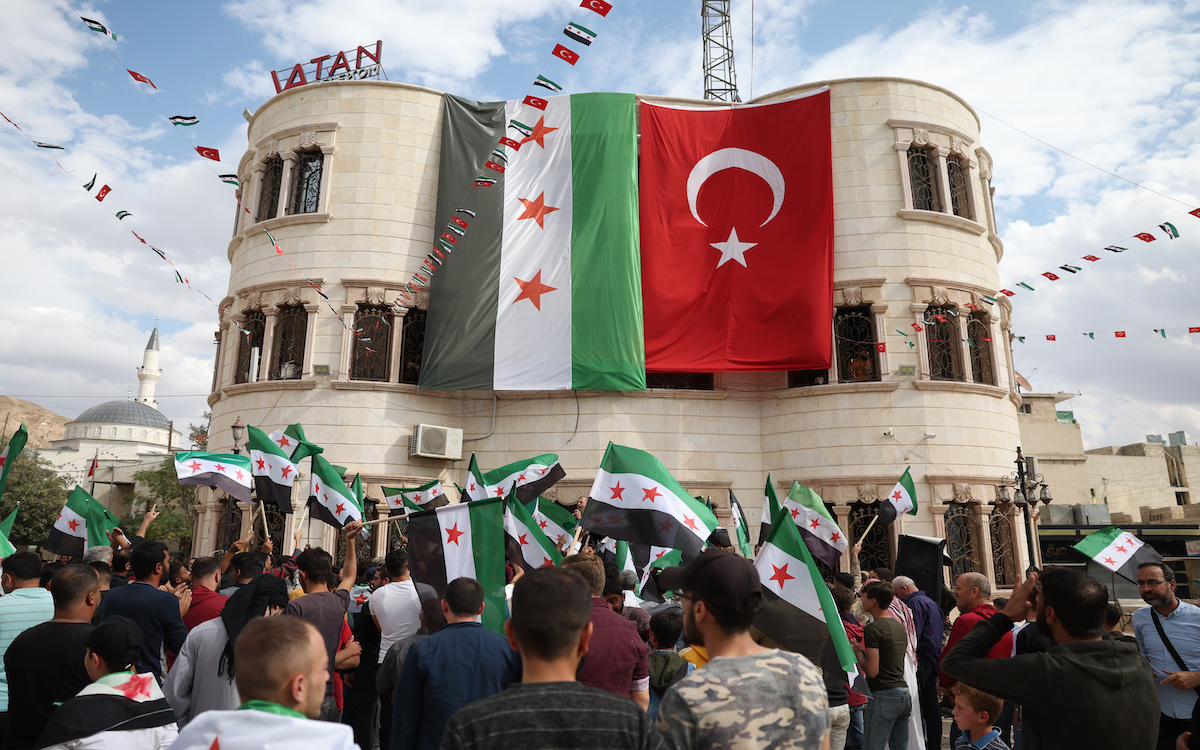 Syrian demonstrators gather to protest Hayat Tahrir al-Sham (HTS) jihadist group in the the border town of Azaz in the rebel-held north of the Aleppo province on October 21, 2022. Photo: Omar Haj Kadour, AFP

As a result of long-running tensions, heavy fighting broke out in northern Syria between a variety of rival armed groups in mid-October. As is always the case in the region, the changing lines of control ultimately only serve the interests of the Turkish government.

The assassination of political activist Muhammad Abu Ghanoum and his pregnant wife by members of the Hamza Division in al-Bab served as a pretext for the fighting. The Third Corp, which is dominated by the Levant Front and Jaysh al-Islam, attacked the Hamza Division, which provoked a response from its allies, the Suleiman Shah Brigade (commonly referred to as Amshat) and Ahrar al-Sham.

Using the fighting as a casus belli, HTS decided to intervene on the side of Hamza against the Third Corps in a supposed attempt to stabilize the “liberated areas.”

HTS, which is the contemporary incarnation of Jabhat al-Nusra and controls the Idlib region, advanced north into Afrin without serious resistance before heading east toward the major town of Azaz.

However, its advance was stalled by the Third Corps at the village of Kafra Jana, in which heavy fighting took place. A Turkish-imposed ceasefire was implemented, but it quickly collapsed, and fighting resumed around Azaz.

Finally, the Turkish military entered the area, and the fighting subsided.

The infighting was essentially a means for one central authority, HTS, to impose itself over the fractured security web that is the Turkish-controlled regions of northern Syria. The main question, however, is why did Turkey remain relatively silent on the fighting, only intervening when clashes reached a fever pitch?

Indeed, it seems likely that the Turkish government is somewhat satisfied with the current changes to the map. Afrin, a region that was captured by Turkey in 2018 and was administered by the Turkish-backed SNA, was once a red line for Ankara, but now things seem to have changed.

One must wonder what Turkey has in store for northwestern Syria and its proxy forces.

As an example of the absurdity of this infighting, activists reported that HTS snipers targeted Abu Wakil al-Homsi, a military commander in the SNA’s Third Corps, on the Khalidiya Front (Jabal Taranda) southeast of Afrin city, killing him.

Abu Wakil al-Homsi is Ibrahim Ajouqa, a displaced leader from the Deir Balaba neighborhood of Homs, who, according to activists and military personnel, was one of the first former Free Syrian Army (FSA) fighters in Homs and was part of the Bayada Martyrs Brigade, which was led by the famous Syrian revolutionary Abdel Basset al-Sarout.

Sarout and his men had fought alongside HTS in many battles, including the defense of Idlib and northern Hama during a series of government offensives in 2019 and 2020, though Sarout himself died in 2019.

Al-Homsi’s killing came despite the implementation of a ceasefire agreement in the area.

An activist involved in protests in Azaz against HTS’s advance who asked not to be named told NOW that hundreds of residents gathered in the cities and towns of Azaz, Kaljabrin, Mara’a, Suran, Ghandoura, Jarablus, and the city of Al-Bab against the entrance of HTS into the areas controlled by the SNA.

He added that the people in northern Syria today, specifically in the areas controlled by the SNA and supported by Ankara, completely reject one of the terms of the agreement between the Third Corps and HTS, that being HTS’s freedom to enter the areas of the regions of Afrin and Azaz, both administratively and militarily.

The activist also indicated that many members of the leadership of the Levant Front, the main faction behind the Third Corps, rejected the terms of the agreement and considered it to be, in reality, a plan to put the Afrin and Azaz regions under the administrative control of HTS.

This would constitute a pretext for Russian and Syrian government forces to target the area and launch new military operations, which would disturb the relative calm the area has witnessed following the entry of the Turkish army and the SNA.

This fact was highlighted when Russian warplanes launched raids targeting the northern countryside of Aleppo during the recent fighting, resulting in the death and injury of a number of members of the Liberation and Building Movement faction affiliated with the SNA.

As for the terms of the recent agreement between HTS and the Third Corps, the settlement calls for a complete ceasefire, an end to the dispute between the two parties, the release of all those arrested in recent events, and the return of the forces of the Third Corps to its headquarters and barracks.

It also ordered the dismantling of HTS’s military alert and that the Third Corps’s influence should be constrained to military affairs only.

Regardless of the agreement, there are still a variety of scenarios that could play out.

Activist Ammar al-Halab told NOW that although the SNA is subordinate to Ankara in almost all regards, Turkey has not shown any serious desire to defend or support the Third Corps.

Considering the recent talk of reproachment between Ankara and Damascus, al-Halab indicated that HTS’s actions in Afrin and Azaz were essentially given a green light by the Turkish government.

Indeed, it would be in Turkey’s interest for HTS to control the Afrin and Azaz regions as it would put the entire area under one administration, that being the HTS-dominated Syrian Salvation Government. It would strengthen Ankara’s control over the area, as HTS is generally more authoritarian than many of the SNA factions, and could act as an enforcer against those wishing to protest reproachment between Turkey and the Syrian government.

With elections in Turkey quickly approaching, Ankara is trying to find a solution to stabilize the situation in the areas of northern Syria, especially considering the myriad of problems caused by the various factions within the SNA. Turkey also seeks to return Syrian refugees to areas under its control, something it has desired as xenophobic sentiments fester within Turkish society.

From Ankara’s point of view, the Aleppo countryside requires security stability and the presence of so many armed factions, many of which are opposed to each other, has only led to chaos and instability.

As time goes on, only the strong (HTS) will survive, which only serves Turkey’s interest.

Northern Syria’s future is still highly uncertain, as the situation is still fluid. Given continued tensions between HTS and the Third Corps, protests against HTS’s presence in Azaz, and the displacement of hundreds of families due to the fighting, it is hard to tell what exactly might happen.

What is clear right now, however, is that the SNA’s usefulness is quickly running out, and Turkey is more than content to allow HTS to at least administer areas of northern Syria under Turkish control.

Mouneb Taim is a Syrian photojournalist covering stories with a specific focus on social issues. You can follow him @mouneb_taim.