Ronnie Chatah draws on the history of post-2005 Lebanese elections and shows that Hezbollah has stood as a primary obstacle to any functioning government. Only full sovereignty combined with free elections would allow Lebanon to implement much-needed reforms, he writes. 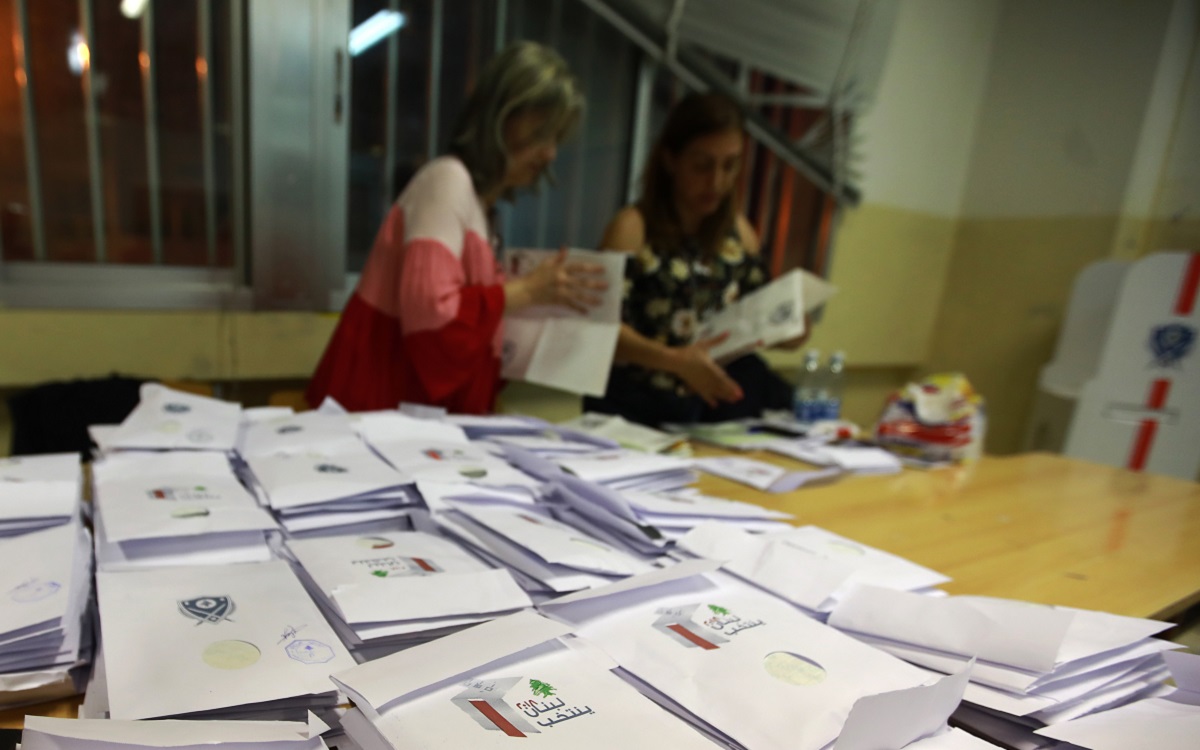 Over the past weeks, I have been visiting dignitaries, diplomats from local embassies, brave activists and tireless NGO representatives. Let alone current ministers and members of established parties.

And I have had heated exchanges with all the above, some degenerating into public arguments. In my opinion, at least, for the right reasons.

I think I am misunderstood when I repeatedly make the case that the issue of Hezbollah is beyond our control. This is in no way an avoidance of the local changes that are possible or a dismissal of next year’s parliamentary elections. On the contrary, even if the effect is marginal, the smallest of steps in the right direction are critical.

I will unpack my larger point and hopefully bring what too often turns into a fiery debate to a calming conclusion.

My life revolves around persuasion. Whether through the podcast, this weekly column or any other outlet that tolerates my tone. In any event I am invited to offer my take, and in chance encounters where my opinion is asked, I provide narrative. And I hope my words attract anyone to the cause of restoring this country’s sovereignty.

This is not a slapstick issue. And it is not a point meant to be buried in the footnotes of policy memos or index of position papers. I firmly believe that 1970 was the last time Lebanon was governable. I know how ungovernable it has been for most of the time since, having grown up in our dysfunctional climate of inefficient confessional power-sharing gone wrong.

My generation rode the post-civil war rollercoaster of periods of short-lived stability and growth combined with the suffocation of aspirations under Syrian occupation, debt-ridden kickbacks to Assad’s collaborators in Lebanon and repeated battles between Hezbollah and Israel.

This is anything but post-war. Two foreign armies remained in Lebanon – Israel quitting in May 2000 and Syria exiting in April 2005. And an Iranian funded proxy army filled the Syrian vacuum, thereafter, bringing us where we are today.

We host an external power’s military base. We had no ability to implement the Baabda Declaration and distance ourselves from the Syrian war because of that sponsor’s role in preserving the Assad regime. We paid a humanitarian price for the years of suffering inflicted by Assad’s henchmen on Syrian civilians. And we stored that regime’s deadliest of weapons meters away from Beirut’s residents.

This is anything but post-war. Two foreign armies remained in Lebanon – Israel quitting in May 2000 and Syria exiting in April 2005. And an Iranian funded proxy army filled the Syrian vacuum, thereafter, bringing us where we are today.

If there is one crucial demand left unfulfilled, it is the aspirations of what drove over one million Lebanese to the streets on March 14, 2005.

What we lost in 1970, the moment we opened our borders to Fatah, the PLO and the Arab-Israeli war. And what we have yet to regain…the immeasurable consequence of remaining a perpetual battlefield for over five decades, rather than the region’s metropole.

Which brings me back to narrative, and what I do for a living. There is no shame in standing up for the principles of March 14. Voices discrediting that movement are missing the point – the individuals that we curse today are figures tolerated by Hezbollah. The rest, all members of March 14, are no longer with us, and the responsibility there lies directly with that group’s assassins.

We moved from oversight from Damascus to dominion from Tehran and could not persuade the last civil war militia to dislodge its Iranian tentacles and join the Lebanese army. The chess-like moves made by March 14 parties for either political survivability or petty pandering circle back to exactly what Hezbollah inherited: the Syrian regime’s ability to further pervert our politics, eliminate those that stand in the way, and guarantee the collapse of our plundered economy.

Chastising March 14’s attempts while ignoring Hezbollah’s role in its elimination solves nothing.

With the exception of an abundance of ego-driven career politicians (and more recent influencers that think their social media followers are enough to win elections), anyone willing to put their credibility and independent thoughts to the test in the jungle that is Lebanon’s politics deserves some admiration. Even in the better of times of our short-lived post-1943 and pre-civil war history, challenging the family dynasty of political parties and standing for the state without confessional bent was a painstaking task.

It is no wonder that, despite criticism for his military role and powers granted to his Deuxème Bureau, Fouad Chehab’s 1958-64 presidency remains an anomaly in Lebanese politics. Yet the institutions many reformists wish to see improved and functioning are from those six years of history. And, in my mind, the challenge is to build on what was possible in the 1960s rather than ignoring our history and wrongly assuming we can start a country over from scratch.

Herein lies my hesitation with wholeheartedly subscribing to the power of parliamentary elections. Ignoring the presidency and prime ministerial battles of the civil war years, and the Syrian-sponsored usual suspects that dominated our lives until April 2005 (many until today), and to avoid writing a dissertation in this section, I will limit myself to looking at the wider outcome of the June 2005, June 2009 and May 2018 elections.

June 2005 saw a majority win for March 14-backed candidates. Many of these were sovereignty-oriented and reform-minded individuals, along with capable ministers allotted portfolios reflecting their background and expertise. Rather than working exclusively on rebuilding the state, within months dozens of MPs were forced into hiding or holed up in security-monitored hotels.

Targeted killings against March 14 figures became the norm. Following the July 2006 War and Hezbollah’s turnaround regarding UNSCR 1701’s implementation, a permanent sit-in in downtown Beirut and paralysis against what Hezbollah deemed a Feltman-backed government turned the 2005 election on its head.

Hezbollah-led battles in May 2008 forced a national unity government out of the Doha Agreement, rendering electoral wins ineffective. Politics by proxy defined real power on the ground, a form of political violence dressed in confessional consensus-garb. Yet in June 2009, the majority of Lebanese once again voted in a March 14 electoral win. And half a year later, condemning pending indictments issued by the Special Tribunal for Lebanon, Hezbollah withdrew its support for the cabinet in January 2011, forcing Saad Hariri’s first of many future resignations.

In my mind, the challenge is to build on what was possible in the 1960s rather than ignoring our history and wrongly assuming we can start a country over from scratch.

The May 2018 election outcome was Hezbollah’s political dream come true. National unity no longer forced through weapons but an outcome of collateral status quo politicians, designed to shield the militia from security encroachments through rotten politics better at robbing what was left of the Lebanese state rather than governing, accelerating a financial crisis that led to our most recent uprising on October 17, 2019.

Even today, the moment Judge Tarek Bitar’s port blast investigation probes too deeply, Hezbollah threatens to resign from the current government it helped establish (in addition to threatening a return to civil war) and prevents the cabinet from meeting.

In terms of systemic obstacles, nothing has changed. And if my skepticism towards electoral wins gets the better of me, it comes from wanting reform-minded politicians to not just win seats but have the agency to implement change.

It is clear that long-term structural change is impossible as it directly confronts Hezbollah. Limited cosmetic change is, however, possible, and this is not meant to sound condescending. Accomplishments, no matter how small, that alleviate suffering today are desperately needed. And if an unexpected window of opportunity arrives where the regional temperature cools down on Lebanon (acknowledging Russia-backed Syria’s detrimental potential at filling that void), reform-minded politicians should be in power and ready to take charge.

Yet time is not on our side, and what we refer to as Lebanon may not be salvageable by then. Finding a way to create that window of opportunity is essential.

Had Hezbollah been a Lebanese militia, only, we would refer to them as any other Lebanese political party. They would have disarmed with the end of the civil war. Imposed sub-state legitimacy post-Taif Accords is over – Israel withdrew in 2000, and a sliver of unoccupied real estate, the Shebaa Farms (whether they are Syrian or Lebanese) do not justify Hezbollah’s arsenal and military capabilities. Syria’s leverage over that group equally subsided after their own departure in 2005.

We are left with an Iranian-sponsored proxy army. And Lebanese do not have the tools necessary to address that geopolitical issue at home.

Lebanon’s state-to-state relations with Iran are Hezbollah’s relations with Iran. And Iran’s official embassy and ambassador to this country is a side show – their diplomatic channel is their fully funded military-security matrix based in Lebanon.

It would be foolish to expect civil society members and political activists to have more influence at addressing this issue than Lebanese officials before them. Hezbollah targets anyone that steps into their security paradigm, and assassinations are a staple of the post-2005 political landscape.

Perhaps by design – and in stark contrast to Assad’s old ways of intimidation – the group allows us to challenge them directly, and daily. If not by the hour, every minute, across television screens and social media platforms. Public opinion, or for that matter the national and regional political capital they once accumulated as a fighting force against Israel has been squandered, and the group does not care.

If my skepticism towards electoral wins gets the better of me, it comes from wanting reform-minded politicians to not just win seats but have the agency to implement change.

Persuasion and narrative, along with parliamentary elections, do little, if anything, to influence Hezbollah’s decisions. It is essential that any country negotiating with Iran puts our case on the table. If we had that ability ourselves, there would be no justifiable reason to push for the internationalization of this issue. But the same factors that led to the Cairo Agreement in 1969 are a mirror reflection of our decades-long nightmare – our destroyed sovereignty. A regional understanding that Lebanon must no longer serve as a warzone is imperative.

Sidestepping Hezbollah is sidestepping Lebanon. I want reformers to win, and the geopolitical quagmire to end, so that we can finally address rampant corruption, lack of accountability, how to better manage sectarianism and bring an end to impunity. Finding a path for Iran – or any country – to reconsider their security needs without Lebanon’s geography gives us a chance at our survival, and election victories their vitality.

It is a question of agency. Not surrender.