Amnesty’s plea came after Lebanese police fired tear gas on Tuesday during scuffles with demonstrators outside the home of caretaker interior minister Mohammad Fahmy, who refused to lift the immunity of a high-ranking security official. 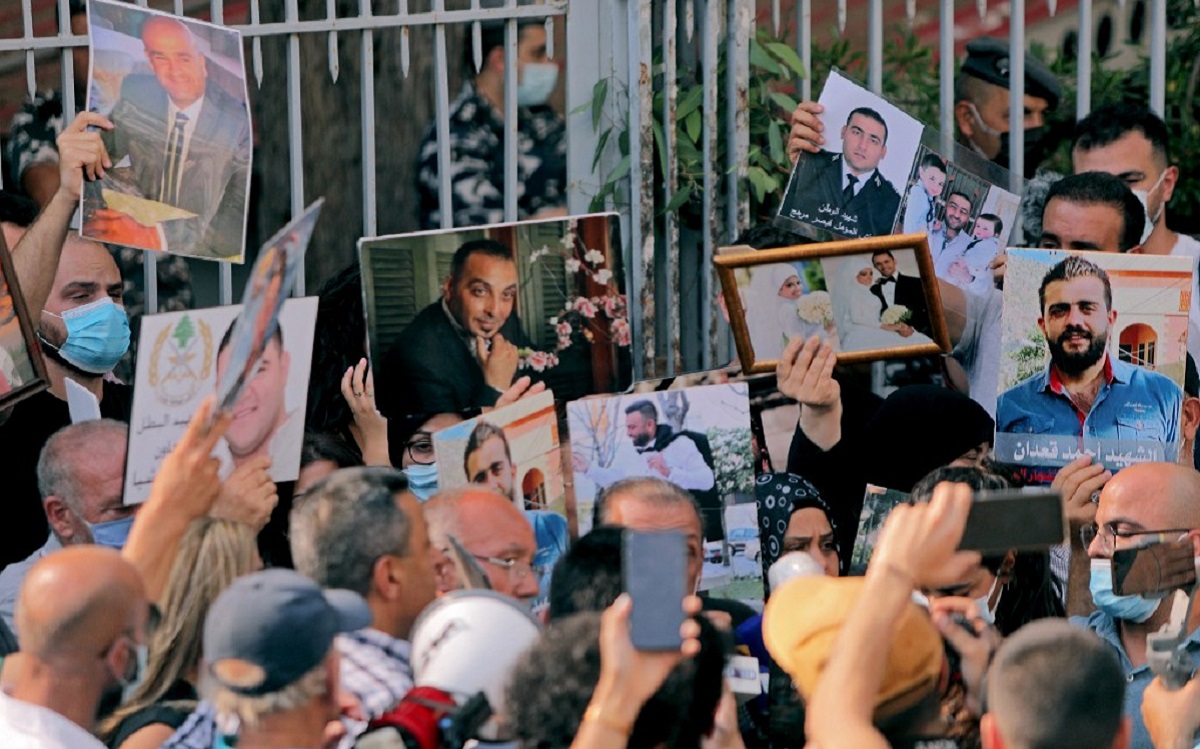 Relatives of victims of the August 4 blast carry pictures during a protest demanding accountability as the anniversary approaches of Lebanon's worst peace-time disaster, near the Justice Palace in Beirut on July 14, 2021. Photo: Ibrahim Amro, AFP.

Rights group Amnesty International Wednesday urged Lebanon to lift the immunity of officials summoned in the Beirut port blast probe, warning not doing so would be an “obstruction of justice”, AFP reported.

The detonation of a huge stockpile of fertilizer at the port on August 4 last year killed more than 200 people, injured thousands, and wrecked huge swathes of the capital.

It emerged afterwards that officials had known about the explosive substance being stored unsafely at the port for years.

But almost a year later an investigation has yet to hold anyone to account, and the families of the victims say political interference has derailed the process.

The lead investigator, Tareq Bitar, has requested immunity be lifted so he can question a top intelligence official and three former ministers in the case, but so far to no avail.

“We stand with these families in calling on Lebanese authorities to immediately lift all immunities granted to officials, regardless of their role or position,” said Lynn Maalouf, Amnesty’s deputy director for the Middle East and North Africa.

“Any failure to do so is an obstruction of justice, and violates the rights of victims and families to truth, justice and reparations.”

Fahmy earlier this month rejected a request by the investigating judge to question Abbas Ibrahim, the head of the General Security bureau, one of the country’s top security agencies.

Parliament has said it needed more evidence before it waived protection for three former ministers who are also lawmakers, a position that a judicial source said the lead investigator has rejected.

On Wednesday afternoon, dozens of relatives of the victims again gathered outside the main law courts in Beirut to demand justice, holding up pictures of their lost loved ones.

In June, 53 non-profits signed a letter calling on the UN to launch ‘international, independent and impartial’ investigation and a one-year fact finding mission as they saw it the only way the probe could have results.

The government stepped down after the port explosion, but has remained in a caretaker capacity through 11 months of endless political wrangling over the make-up of the next cabinet.

Lebanon desperately needs a new government to launch reforms so that it can unlock aid to save the country from one of the planet’s worst economic crises since the 1850s.

Premier designate Saad Hariri on Wednesday said he had presented President Michel Aoun with a new line-up of ministers “able to stop the collapse”, and the latter said he would study it.