In Beirut, you will find angels mourning. But they will never accept to be ruled by demons, even in hell, writes Ronnie Chatah. 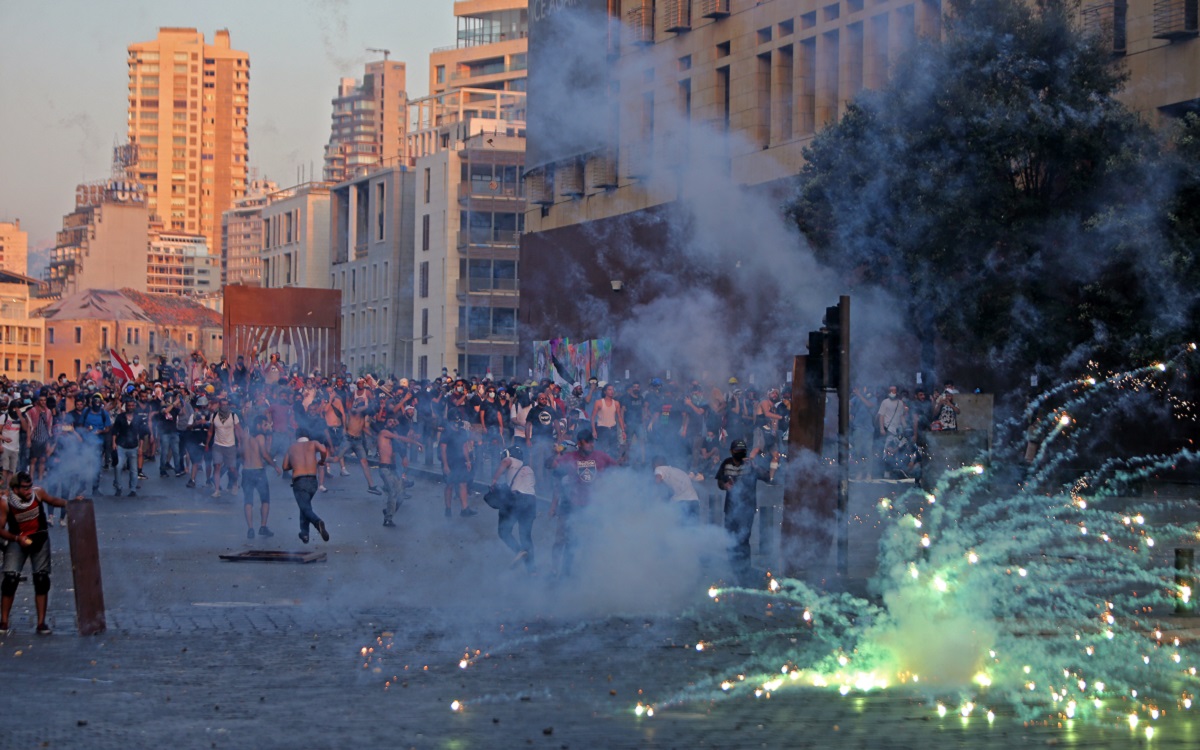 In Beirut, on dreadful anniversaries like August 4, you will find angels mourning. But they will never accept to be ruled by demons, even in hell. Photo: AFP

Unbearable. The anniversary, itself, the worst of reminders. Time that never heals: 6:08, burned into our national psyche. One year that passed without respite.

The backdrop, a once proud and triumphant city, with a skyline damaged faster than the civil war’s most notorious could conjure. Mid-century architectural gems and Bernard Khoury’s eccentricities defined instead, by broken windows and shattered glass. Covered by banners of defiance and rage, facades in disrepair draped over by markers of death.

And on stage, a determined population. The port’s remains are in full view, partially sunken ships jutting alongside a makeshift cemetery of wreckage and unusable crates. The open view is disrupted by the monstrosity of wrecked wheat silos, smashed by an ammonium nitrate blast while saving the city from further destruction.

I walk from Mar Mikhael around 3pm, the mid-summer’s scorching sun heating the pavement and guaranteeing all items of my clothing are drenched in sweat. Dozens commemorating August 4 are behind me and in front, heading in the same direction, reaching hundreds gathered by the ruined remains of Électricité du Liban.

With two water bottles in hand I cross the highway and head towards the Meghterbeen statue, joining thousands gathered for speeches by the port blast victims’ families. From a distance, the scene feels all too familiar, an experience from multiple rallies since 2005. Flags in hand, families and demonstrators across generations standing together. Except this marker is emotionally demanding, noticeably somber and defined by murder.

Members of the Fire Brigades Union, the first of the victims’ relatives and friends to arrive, march west towards Charles Helou. Their heads are held high, and their pride is on full display. There heroes who risked their lives, annually to battle forest fires without adequate equipment were criminally called on a year ago to contain warehouse #12’s fire without warning of any ammonium nitrate storage. They had been sent to their death. Sahar Fares’ photo is the first among ten who paid the ultimate price to try and keep us safe.

Paul and Tracy Naggear arrive from Achrafieh, holding a silhouette of their late daughter, Alexandra. Making their way to the stage alongside thousands of us applauding their heroism. I walk by Paul for a few seconds, in full admiration of turning the worst of any parent’s pain into the most noble of goals. Refusing to turn their backs on Lebanon, their daughter’s spirit shines not just through them but all of us since her loss. “Their end is coming,” he shares with me.

Hussein El Achi approaches with passion, his new parental duties running in parallel to his youthful persuasion. A multi-tasking of the sort I can hardly imagine. Our bittersweet exchange includes his firm belief in local and parliamentary elections changing reality on the ground. A political leader in the making, and a pioneer from Minteshreen born out of October 17 without fear and a determination to only look ahead. His conviction, his honesty and decency a certainty.

A city, and a country, that deserves to live rather than die. And a nation that keeps trying, in face of the most brutal form of political crimes.

Tom Young’s infectious smile is visible across the highway’s divider. His skin is more sensitive than my own, and his embrace is more heartfelt than anyone I know. His art delivers a reflection of what we all live in yet so few of us can express. The paintings of our majestic landscape and heritage, our history and collective memory. His emotions are shared when his work portrays the thuggery and intimidation that seeks to end October 17’s spirit. His love for a neighborhood he considers his own – Gemmayze – was in colorful majesty on canvas years before. Today, all but dreary, tormented and in despair.

Monika Borgmann stands beneath a tent’s shade, her skin turning pink like my own natural hue. Her eyes meet mine with a familiarity that shines from emotional wounds. A friendship that feels decades old although we first met on February 4th. And we meet again, six months to the date following her husband’s assassination, a permanent marker of a city’s lost agency punished by collective impunity. Her adamant pursuit to expose Lokman Slim’s killers is an inspiration on its own, reminding all of us of the need for an international investigation into all political crimes. From the port blast to the ambush that took Lokman’s life.

Monika is pursuing her own path towards justice. Like Paul and Tracy Naggear’s.

I think of him whenever I roam these loving and burning streets. And I cannot speak to him because of the same geopolitical curse that destroys us. He spent his entire political career trying to restore Lebanon’s sovereignty. A foundation we lost, to hold rotten leadership to account and dislodge us from regional wars none of us voted for. Our borders, our telecoms, our airport and our port under state authority without external subjugation or sub-state tutelage, rather than enhancing a neighboring regime’s survivability and a regional power’s influence.

My father was assassinated nearly eight years ago and his memory has faded like those murdered before him. But these multiple crimes make up different chapters of the same story.

A city, and a country, that deserves to live rather than die. And a nation that keeps trying to survive.

Speeches end at 6:05 pm. I stand by several friends wearing backpacks with gas masks ready for evening battles ahead. Standing shoulder to shoulder as it reaches 6:08 pm. Just under a minute of a wondrous silence that engulfs tens of thousands. That standstill, a tentative moment of national embrace, interrupted by celebratory applause, followed by chants of dreams against our nightmare.

Minutes later, the crowd splinters into those heading home in different directions across Beirut and those ready for a new round of protest in Martyrs Square. And by sunset, familiarity on the streets of the flicker that still defines October 17. Youth-led determination against a militia-led regime.

Too many of our bravest and innocent have been killed. Political violence, stretching from the civil war through today, turning our country into perpetual tragedy.

And in Beirut, on dreadful anniversaries like August 4, you will find angels mourning. But they will never accept to be ruled by demons, even in hell.