Lebanon is experiencing a bread shortage as wheat imports have stalled, and experts say that, like other crises, the government’s plan is only a short-term solution. 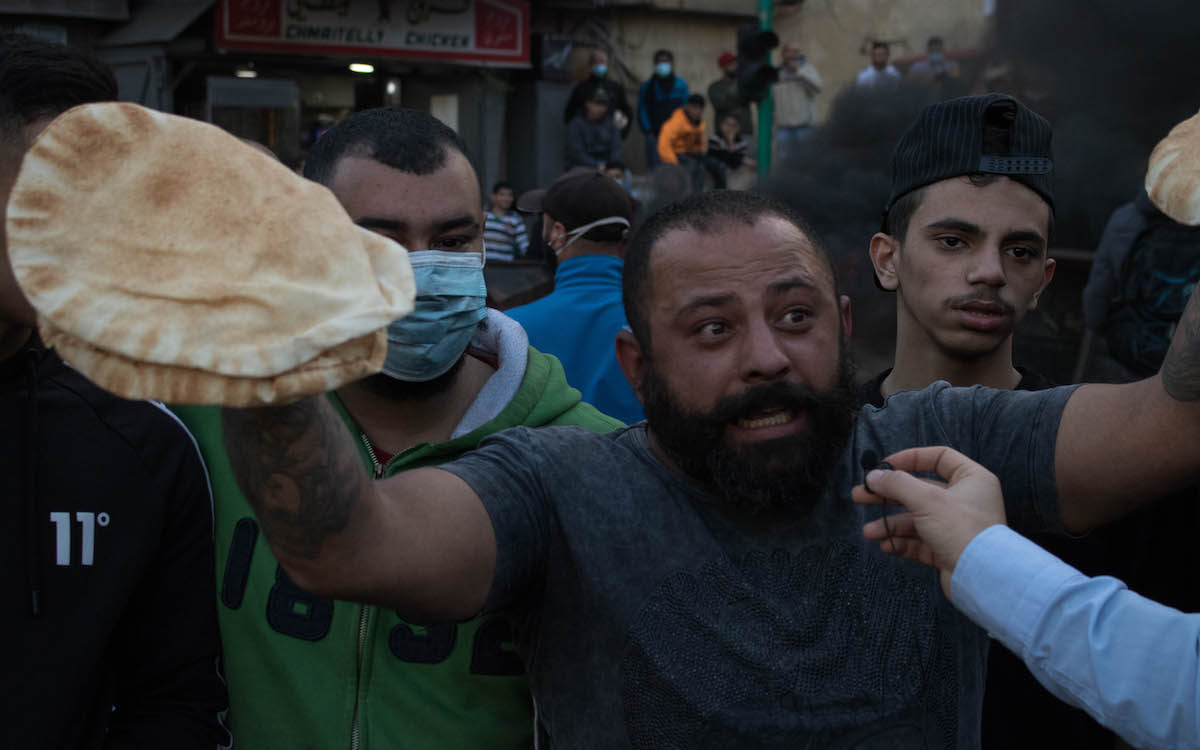 A man protests the rising cost of bread during a March 2, 2021 demonstration in Beirut. Photo: Nicholas Frakes, NOW

It was nine in the morning and a long line had already formed outside of the bakery in the Zehrieh neighborhood of Tripoli.

There was a limited amount of bread for purchase, so customers had to arrive early to ensure that they received a packet of bread.

Not too long after, the bakery was open for business and the hopeful customers began quickly filing into the shop to make their purchase. But almost as soon as the store opened, the bread was gone for the day.

According to one worker at the shop, this is how it has been every morning.

At another small store in Beirut, the owner says that she is able to secure around 10 packets of bread to sell in the morning, but they are always bought almost immediately.

This has become the new normal throughout Lebanon as a shortage of wheat has created a bread crisis, forcing people to wait in long lines in front of bakeries without any guarantees that they will actually receive anything.

Some stores have tried to put limits on how much bread a customer can buy – usually one bundle of bread per customer.

“The need remains to be far bigger than what has been made available in the market,” Maya Terro, co-founder of the Lebanese NGO FoodBlessed, told NOW. “On top of that, customers who are denied purchasing four or five bundles at a time are quick to create problems that only make things worse for others.”

While the government has announced plans to combat the crisis, Mohanad Hage Ali, a fellow at the Carnegie Middle East Center in Beirut, said that the plan is more of a short-term solution that will eventually lead the country right back to the same crisis.

“One recurrent feature of Lebanese politics is the shortages in fuel and bread. Even if there are imports, the fact that this is a global crisis, and Syria is impacted, how could the government control the flow of subsidized wheat across the border if there is a shortage in Syria,” Hage Ali told NOW.

“Their [the government’s] policy has been all patchwork, and in such a crisis, this will not lead to an end to the long bread queues and recurrent shortages. It is bound to happen again, and it looks like this upcoming winter might be as difficult as the previous one in terms of heating difficulties, and on top of that, a food crisis could make life more complicated.”

A staple of the Lebanese household

Bread is arguably the most important sort of food when it comes to a Lebanese dining table.

It brings all of the foods together and, for the most part, is cheap and easy for families and individuals across the spectrum to access.

That changed after the economic crisis took off.

Subsidies began to be lifted or partially lifted, causing the price of flour, and by extension bread, to rise, making it increasingly unaffordable for those living in poverty in Lebanon.

According to Terro, it is important to look at availability, accessibility and affordability when it comes to talking about food insecurity.

“While availability and accessibility relate to production and distribution, the question of affordability is linked to the resources at one’s disposal that determine one’s capacity to buy food,” the NGO worker explained. “The bread crisis in this case fares badly on all three fronts. Bread isn’t available or accessible to most, and when it is, it is either rationed and/or sold at a higher price at the black market which makes it even harder to afford by a population where more than 80 percent of it has plunged below the poverty line.”

Since Lebanon relies on importing a majority of its goods, such as wheat, and the imports need to be paid in dollars, as the economic crisis has worsened, the cost of paying for these imports has drastically increased.

On top of that, Russia’s invasion of Ukraine has also made it harder to import wheat.

Nowadays, many suppliers no longer sell us flour because they don’t have any. And even those who have it, usually limit us by the amount we can buy from and the prices usually in these cases become really. I’d say almost at three times higher price than what it used to be before the war [in Ukraine].

Ukraine is one of the world’s largest exporters of wheat globally, but the war has put a stop to that.

While Russia and Ukraine have supposedly signed an agreement to let Ukrainian wheat exports leave the port of Odessa, Russian strikes on the area seem to say something entirely different.

“Take that and add it to the fact that the country’s incapacity to store wheat reserves given that its largest silos were destroyed in the 2020 Beirut port blast and you get all the ingredients you need to create a crisis,” Terro added.

Terro, whose NGO provides food baskets to those in need, has found it increasingly impossible to include flour in the boxes that they provide because of the crisis.

“We usually work with six different suppliers every week to try to get the best prices for our items,” she said. “Nowadays, many suppliers no longer sell us flour because they don’t have any. And even those who have it, usually limit us by the amount we can buy from them and the prices usually in these cases become really expensive. I’d say almost at three times higher price than what it used to be before the war [in Ukraine].”

The government has already announced plans to take action against the crisis, with Parliament approving to use of a $150 million loan from the World Bank to pay for wheat imports that will supposedly help stabilize bread prices for around six months.

Amin Salam, the caretaker economy minister, told the Associated Press that the government is planning on building new silos in the Port of Tripoli and Bekaa, as the current silos in Beirut are on the verge of collapse and would take at least a year to complete.

These plans, however, may not prove as effective at curbing the crisis as the government may want it to seem.

When it comes to implementing solutions to a problem or crisis, the Lebanese government tends to look at things in the short term rather than taking steps that may take a little longer but will have more of a lasting impact.

Despite needing to reform the energy sector, the government signed an agreement with Egypt and Syria to import Egyptian natural gas that will bring more electricity to the country but only for a short period of time. All the while, the energy sector remains in tatters.

It is the same thing in regards to the bread crisis and the importation of wheat.

“In managing the bread crisis, there are two challenges,” Hage Ali explained. “The first is bakeries are using the wheat to produce unsubsidized items such as cakes and various types of bread, which cuts from the share of subsidized Arabic bread. The second challenge is smuggling wheat. And this is not only a Lebanese problem, but also one that the Syrian opposition is struggling with.”

So while the World Bank loan might allow Lebanon to import wheat, unless the government works to secure its borders, products like wheat, fuel, and medicine will continue to be smuggled across the border.

In the absence of bread [food], people can change. They become less humane, more anxious, hopeless, and violent. Hunger has a way of getting out the worst of us. It doesn’t deliver us from temptation but rather the complete opposite. It leads us to evil.

It also fails to solve the problem of bakeries hoarding wheat so that they can sell more bread once the price has gone up.

According to Hage Ali, if the government really wanted to work on a long-term solution to the bread crisis, it would look more at producing wheat locally, bringing down the price locally and allowing the country to benefit from exporting as well.

“The government could incentivize this for sure, and Mikati has already spoken about this,” Hage Ali stated. “They could provide loans for such projects, seeds, and expertise. policy options could include paying local farmers for wheat in USD, or the equivalent of that in local currency. At least for the first two years.”

However, if they were to do this, then it “would go against all government policies which seem designed, even if unintentionally, to decrease domestic production, and increase reliance on imports.”

With the situation worsening, Terro fears that the social situation in the country will also deteriorate, comparing the current crisis to the fuel shortages last summer where fights broke out as the population desperately tried to get just a little bit of fuel for their vehicles.

Already, Syrians have been targeted in a campaign that blames them for causing the crisis, with right-wing parties accusing Syrians of eating up all of the country’s bread.

This has led some bakeries to refuse to sell to Syrians.

Others have begun echoing the rhetoric stemming from this campaign about Syrian “bread thieves”.

One shop owner in Tripoli told NOW that 70 percent of the bread is bought by Syrians, and only around 30 percent by Lebanese because Syrians get monetary support from the UN, a common anti-Syrian narrative that exists throughout Lebanon.

In some instances, this has also led to Syrians carrying bread being beaten.

While Terro tries to remain hopeful that things will eventually get better, she worries that the situation will get much worse before that happens.

“In the absence of bread [food], people can change,” she said. “They become less humane, more anxious, hopeless, and violent. Hunger has a way of getting out the worst of us. It doesn’t deliver us from temptation but rather the complete opposite. It leads us to evil.”